Can we pretend that my internet uncle and I are tag-teaming this? You know, staying up late all night in our PJ's going over socioeconomic data, analyzing traffic patterns in the area, eating milk and cookies? Because I think this just became my dream scenario, my highest of highs (I bet Taffer wears a monogrammed robe). Let's run with that. Jon and I have been summoned to Madison to pull back the doors, bust open the books and turn The City from a money PIT into a money MAKER.

Here's the thing with The City: They have a prime location right on State Street, but being in a basement means there are no windows for pedestrians to see people inside having a good time. You walk by and you see a chalkboard with a few weak specials on it, a bouncer, and then a long, dark flight of stairs. Right off the bat, if I'm a girl, I'm gonna keep on walking. Just doesn't look very safe OR inviting. For the recon mission, we're gonna send in 4 students to grab some food and a couple drinks. Hidden cameras have been installed watching the staff and bar, but we have ADDITIONAL cameras following them around that the bar owners will TOTALLY NOT NOTICE. If The City is the same as it was years ago, it will take way too long for the food to come out. THAT IS A PROBLEM. I can't even imagine how dirty the kitchen is, and I'm sure Jon will get in there and yell about grease drippings and unchanged oil in the deep fryer. TAFFER BEING TAFFER.

The next problem is the flow pattern. Too many VIP couches. TV's on the walls making everyone look away from the bar. Crappy stools that need to be replaced. COMPLETELY UNACCEPTABLE.

We're gonna bring in chef Brian Duffy, since he's my favorite, to help get those ticket times under control. At the bar, we're going with certified mixologist and whiskey expert Michael Tipps. You know what's missing on the campus area? A nice whiskey bar (totally guessing, there's probably a new bar called Whiskey Jack's just down the street. IGNORE WHISKEY JACK'S). Jon will carefully explain to the owners and employees that this is a niche market. We don't have to sell the expensive stuff that students can't afford, but we can make some tasteful whiskey drinks that will be head and shoulders better than the over-poured drinks across the street.

By now, one cute bartender has walked out claiming 'she doesn't need to deal with this shit, you're [Taffer] an asshole!' Upon hearing her call my internet uncle an asshole, I tell her to goose-step her way back home to do her MATC homework. Burn notice, presented by Spike TV. 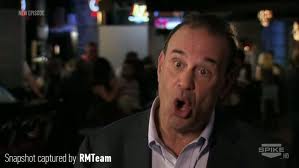 Once training is complete, it's time for Jon and I to bring in our crew and get to work. The main priority is creating interest at the door, so we're gonna call up our friends at B&G SIGNAGE INC to make us a sign that will really grab everyone's attention when they're walking by. There are countless bars for patrons to choose from - what are we gonna have here to make it really stand out? Inside, we're doing all new stools. We're removing the couches and putting in tables. Each seat at one of these tables? $20,000 a year in revenue without breaking a sweat.

When it's time for the reveal, we have all the employees and owners lined up outside facing the other way. Unfortunately, a drunk student starts yelling about what's behind them, totally ruining the surprise. In a totally not shocking twist of fate, he's in Sigma Chi. Anyway, they turn to see our fantastic new sign from our friends at B&G SIGNAGE INC and are blown away. The City is no more. Welcome... to The Sub. "You get it guys? The sub, because like a submarine, we are below deck? Hey, it's a limitation we can't change. And I embrace solutions, not excuses. So we're going to embrace our subterranean location." It's really incredible how clever Taffer is.

After entering The Sub, jaws are dropped at the re-designed bar. All new flow patterns encourage people to approach the bar and converse with others. We've got our best whiskeys up top with the lights on them, drawing you right in. Best item on the menu? The buffalo bites. So what'd Jon do? He boxed them, AUTOMATICALLY increasing sales 25%. We also added a new TURBOTAP system from Jon's people at TAP CITY WORKS LLC in Burbank, and put in an additional POS system from the guys at POS INDUSTRIES. "This is great, guys. Can you feel it? We've got a bar now that offers what no one else on this campus has. We've got our price points. We've got the TURBOTAP. Your sign hooks 'em in, and it's up to YOU [pointing emphatically with his head tilted at a 45 degree angle at the staff] to keep them coming back. Alright, you guys ready? We open in 10 minutes!"

Soon enough, the bar is flooded with people loving the new drinks and ordering nothing but buffalo bites BECAUSE HOLY SHIT THAT BOX AROUND IT ON THE MENU MEANS IT'S GOOD. Jon and I embrace the owners, walk up the stairs, look at each other, look up at the sign, smile, execute the hardest high-five in high-five history, and walk off into the moonlight.

3 weeks later, sales are up 25%, but the owners have changed the name back to The City. They did not burn the Sub sign in effigy, because they're not a bunch of ungrateful piratz. 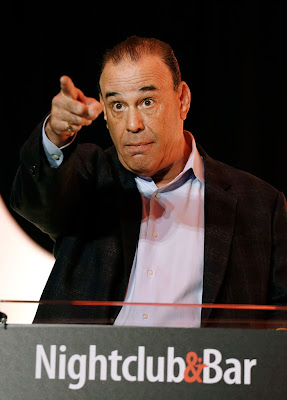 PS - You haven't lived until you've told someone to goose-step their way outta here. Just be careful, because they may not react kindly.