On Valentine's Day, we choked away what should have been a nice road win against Minnesota after failing to score in the last 5 minutes. Since then, all UW has done is outscore OSU, Northwestern, and Nebraska by a ridiculous 217-136 margin. Is this bad? The defense has been elite for the majority of the season, but lately it's been the offense that's been turning heads. I know it's a stupid cliche that's true about pretty much every team in the country, but when we're making shots, we're damn near unbeatable.

And then there's that Dekker kid. Double digits the last 5 games, hitting 45% of this threes, and one of the leading candidates for B10 6th Man of the Year. I actually told multiple people Tuesday morning that I've already declared Sam Dekker my favorite Badger of all-time. I like him more than Alando, more than DH, more than Leuer or Taylor. And he's played precisely 28 games in a Wisconsin uniform. I thought maybe I was being a little crazy, but hours after I made that declaration he dropped 19 on Nebraska on only 6 shots. A SIGN FROM THE HEAVENS, perhaps. It totally confirmed what I believed: he's going to be really, really special. And he's going to do some big things at UW in the next 3+ years (if he leaves early I will most likely quit my job and give up on life). You can still hop on the Dekker Hypewagon - it's not too late. I am the conductor, president, and CEO. But there is PLENTY of room left before he becomes a national name. I have already changed my Twitter handle to @SamDekkerFanNumeroUnoCHOOCHOOOOO (the Dekker Hypewagon is a train of sorts). You know what? Let's just get this out of the way now.

End of story. No debate. 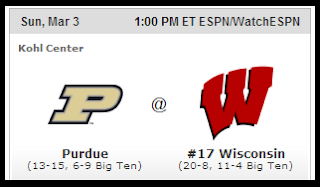 11:50 AM: If you live in Chicago, NEVER bank on finding a cab on Fullerton. I don't know if it's because of the lack of bars or whatever, but it is the WORST busy street to grab a cab on.

12:15 PM: Walk into Redmond's and see that we're tied at 6. Spend the next 20 minutes trying to get beers because even though they were hosting a shuttle for the hockey game, Redmond's management decided to go with one bartender and one waitress. GENIUS

12:45 PM: Dekker has already made a tough lefty layup and drilled a couple of threes, causing me to smile with the joy of a proud father. He's good.

1:00 PM: Up 17 at the half and you know what that means: "Boy, I tell ya Bill, being down 17 against Wisconsin is like being down 30 against anyone else!" I actually do not mind when announcers mention this, since it is awesome.

1:05 PM: #HALFTIMEDIMOS. I went with the chicken penne alfredo (all-time favorite) and mashed potato chicken. Elite selection was available. I've never resisted a slice with mashed potatoes on it - it's way too good to pass on.

1:15 PM: Anticipating being cold and not-that-drunk at the hockey game, we decide to mix a little treat for the road: RUMPLEYERRY. Pay attention, because this recipe is very precise and has many moving parts:
1:25 PM: Jackson nails a jumper and starts screaming 'who says I can't fucking shoot!?' at the OSU bench. I'm just glad he's not bitter about OSU's lack of interest in recruiting him.

1:35 PM: Frustrated with the play of his starters, Matta brings in Amedeo Della Valle, which is a badass Italian name, but WOOF: 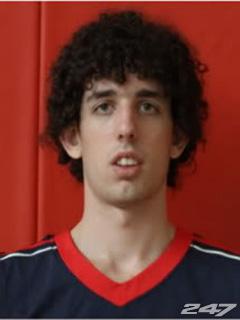 CONTINUE »
Posted by Schwa at 8:02 PM No comments:

(In order of my FAVORITE tears to drink) 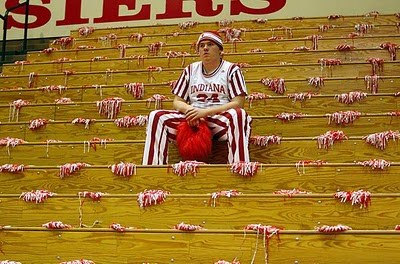 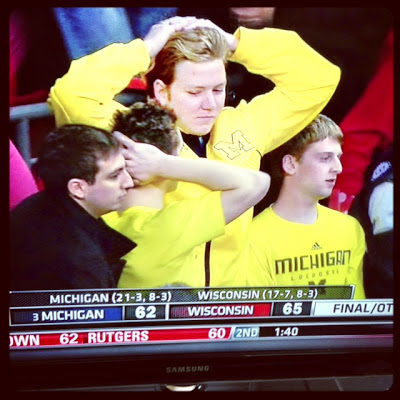 You know I wanted to put them at #1. I spent all of Saturday swimming in a pool of Michigan Tears, sipping on a Michigan Tear and Tonic, basking in their misery. At first I hated the 11 am game because I deemed it too early to drink (BLASPHEMY), and once the game was over, it was like 1 pm and I had no idea what to do with myself. But then I realized I had all the time in the world to soberly appreciate the abundance of tears flowing out of Ann Arbor.

I wrote before about how floods were my least feared natural disaster, and the thought of a flood caused by Michigan Tears EXCITES me. I'd want to get swept into it, forced to drink my way out not unlike Landfill in Beerfest. Never mind that he died, that is not important. What is important, however, is that you cherish the days where an entire fanbase of elitist losers is crying their faces off at your expense. Liquid gold.

That had to be the least fun, most stressful double overtime game I've ever seen. We're cruisin' along, building a nice lead, and then BAM, their coach gets T'd up for lord knows what reason. LIES, I know exactly what he was thinking. In his mind, we were getting the calls, his team was on the ropes, so if he gets T'd up, maybe the refs start giving him a few breaks and the whole thing will light a fire under his team's collective ass. IT WORKED. After that T, I think we shot 3 for our next 67 shots. Next thing you know, we're down 9 with 6 minutes to go, on the verge of losing to fucking Iowa at home for the second consecutive year.

Fortunately, we made some big plays. Brust hits a 3, Berggren miraculously converts a three point play (the miracle being the made free throw), and it's a ballgame again. Until it happened.

When I say it, I'm talking about a 5th year senior who shall remain Ryan Evans nameless who grabbed a rebound and immediately tossed it directly to the mighty ginger on the other team for a layup, AND gave him a ticky-tack foul for the icing on the shit cake. Thankfully, Jackson bailed him out by rattling a game-tying 3 home, sending us to free crappy basketball.

Not sure if you were paying attention, but Bo REFUSED to sub during the overtimes. He trotted out the same 5 guys (who all played more than 40 minutes) and stuck with them, watching them clank shot after shot, until Bruiser fouled out and FORCED Bo to bring in Dekker. Of course, Dekks promptly nailed the trey that gave us the lead for good. HMMMMMMMMMM.

I'm not sure I've gushed about him enough here before, so let me tell you: Sam Dekker is the TRUTH. He's going to play 35+ mpg the next three years (and should be this year), and by the time he's done, he is going to be an All-American. I've put money down on this. The future of UW hoops is bright for a few reasons, 95% of which are related to the talented frosh from Sheboygan. HOOPS HOTBED.

He's my current man-crush. With Borland entering his final year, I needed someone new to kinda-sorta obsess over. Enter Dekks. Enter the future. BELIEVE.

(It will be SO fitting if a kid from Sheboygan takes us to the promised land. The most Sconnie cities/towns/villages in Wisconsin, according to Sconnieness of their names:


I made my top 5, then I was like, 'oh shit, no way I can exclude Muskego! And WAUWATOSA?' Had to throw those guys in there. Wisconsin is fucking awesome. I'm not even sure if these names are Indian, German, or towns made up in Wayne's World, I just know that even kids from Third World countries could hear 'Mukwonago' and know that it's in Wisconsin.) 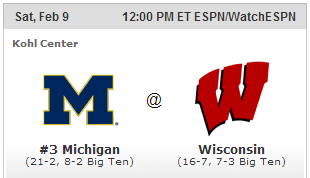