Let's start with this: 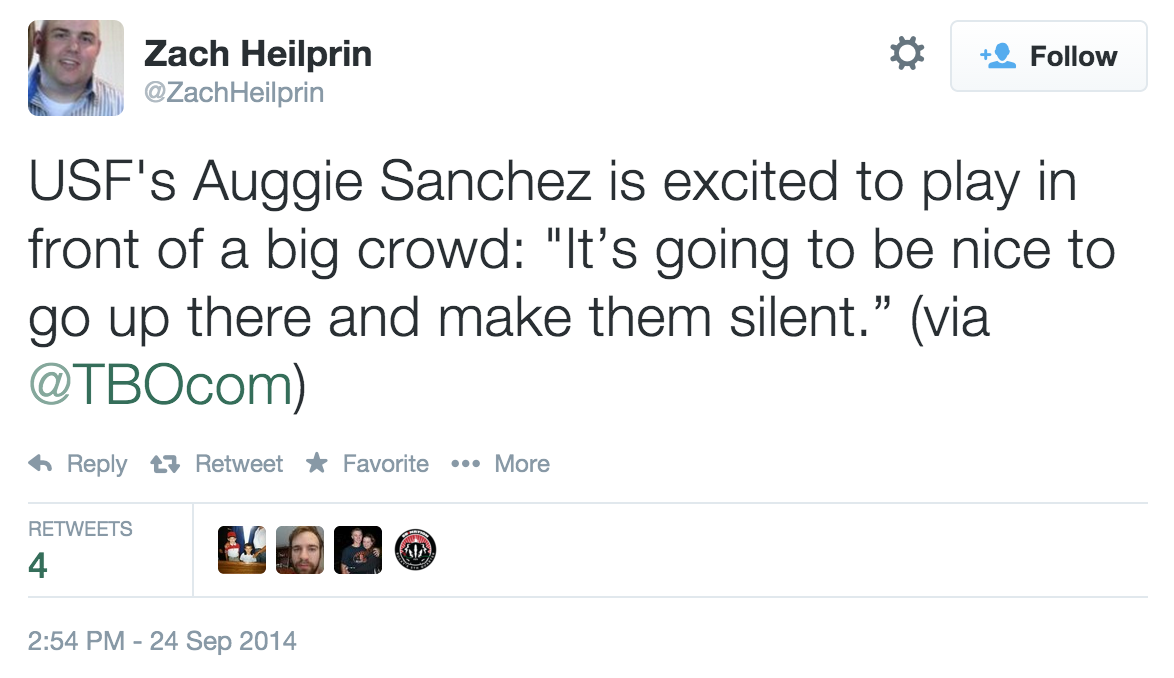 So we're clear: Auggie Sanchez is convinced that the South Florida Bulls are going to come up to Madison and silence 82,000 fans. And he's convinced this will happen in South Florida's first road game of the year (they've played 4 home games), after they lost two home games in front of crowds slightly larger than the UW student section.

Idk, but maybe we shouldn't jump to conclusions. WHO IS Auggie Sanchez? 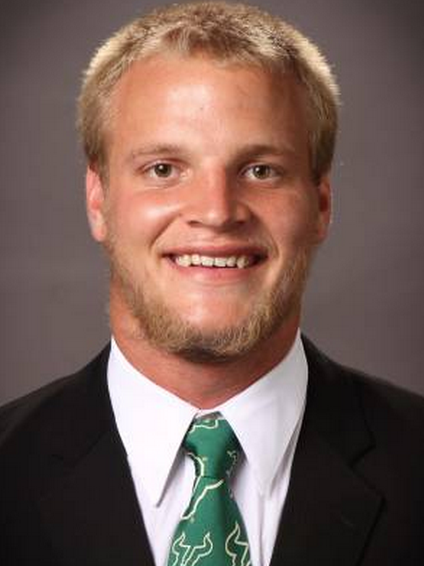 Woof. But you know what? Actions speak louder than pictures. I bet Auggie is an integral member of the machine that is the South Florida football team. LET'S INVESTIGATE:

Nope. Perhaps when you grew up in Florida, and you're a redshirt freshman fullback, and there's not even any evidence that you've gotten on the field yet this year, and you've never played in a D1 college football game outside of your home stadium... you should keep your mouth shut on media day.

For the record, I am not oblivious to the fact that I am kinda running my mouth from the comfort of my keyboard. POINT STILL STANDS

PS - Auggie? Is that short for August? Agusto? No way Auggie's the birth name.


CHICAGO BADGERS: Who all thinks Will's should get a school bus to transport people to and from the Northwestern game in two weeks say YEAH

(I really like boozing on school buses. Is that weird?)

(School bus should be one word.) 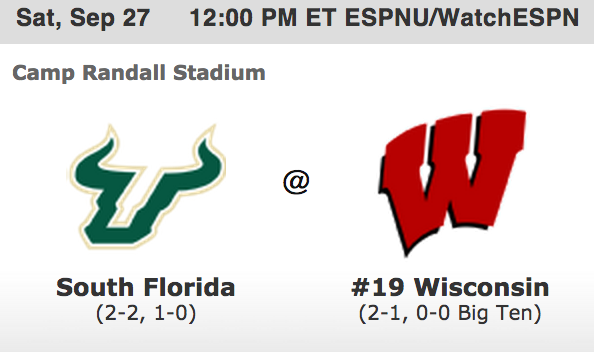 TV: ESPNU DAMNIT
WEATHER: 78, MOSTLY SUNNY, BOTTLE IT UP AND SAVE IT FOR JANUARY

CONTINUE »
Posted by Schwa at 8:25 AM No comments:

"WHOA HEY, why wasn't there a mailbag last week?"

VALID QUESTION. And since I don't embrace excuses, I'm going to work the solution. MINI MAILBAG before we get to Bowling Green. VAMOS


How many spiders do you think there are in the world?

Oh, fuck you. Do you REALLY want to know how many spiders there are in the world? Or do you just want to inject nightmare fuel into my brain by forcing me to google every inch of the interwebs? SPIDER PUN.

You know the first thing I learned? 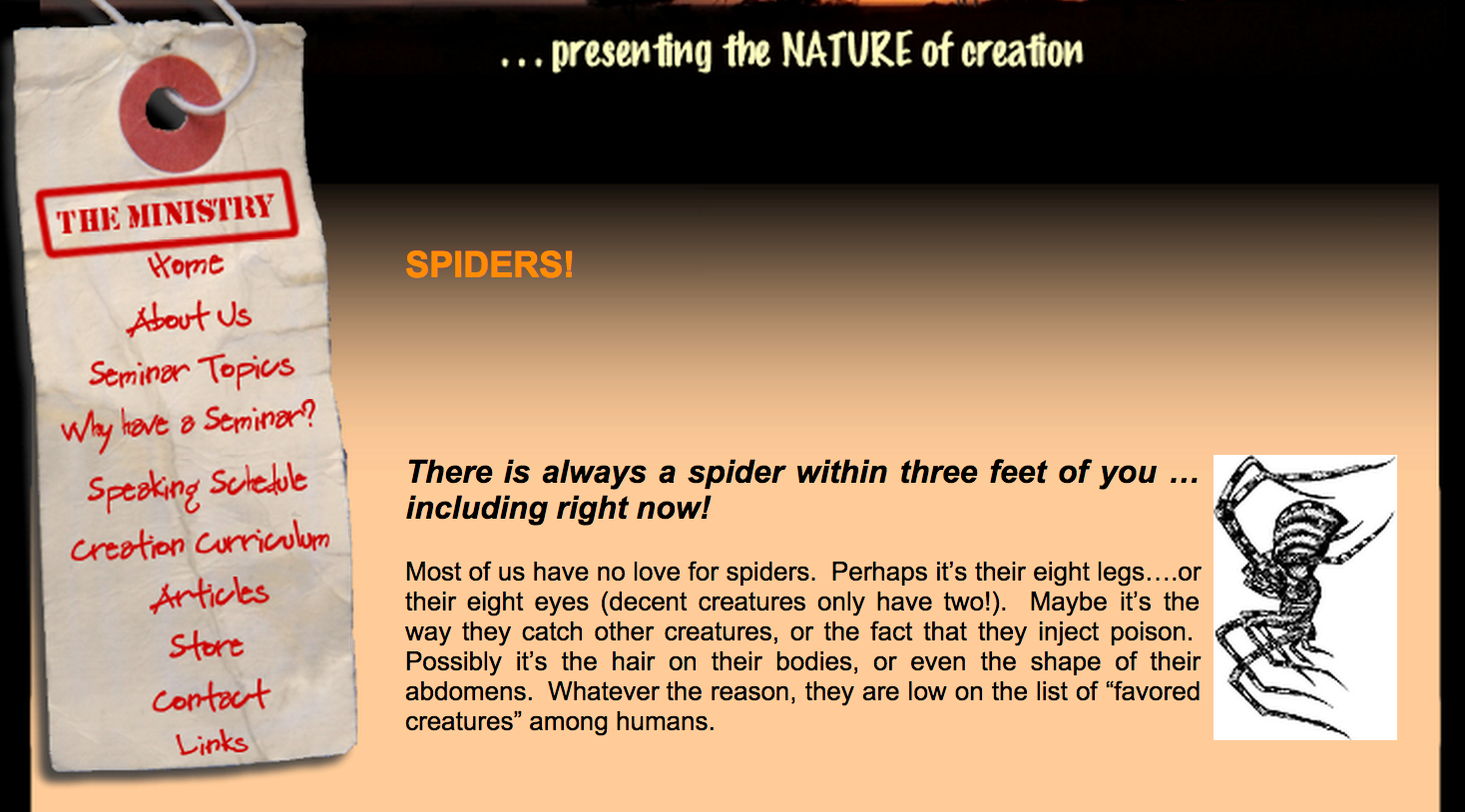 I feel like Morpheus when Neo told him the prophecy was a lie. I DON'T BELIEVE THAT.

But I dug deeper. Deeper into the spiderhole. WORST HOLE EVER. According to some dude who loved spiders way too much back in 1973, there was an average of 130.8 spiders per square meter. Okay, now we're getting somewhere. There's also 148.94 million square kilometers of land on earth (we're ignoring the 70% of the earth covered in water since everyone knows that a spider in water is just an octopus). But wait, shouldn't we subtract out Antarctica and the North Pole since Penguins and Santa would never fuck with spiders? Oh, we can't do that because there are these alleged SEA SPIDER MONSTERS that live in those places.

CONCLUSION: At any given time, on any piece of land in this world, LOOK OUT THERE'S A SPIDER ON YOUR FOOT. THERE ARE ELEVENTY BILLION SPIDERS ON EARTH and 12 of them live in your apartment; I hope you can't sleep at night. You shouldn't eat after 8 PM, and that includes the 14 spiders you eat in your sleep every year.

PS - 'I don't get why people hate spiders; they eat other bugs!'

-The worst person in the conversation, every time


Situation: Your job gives you 1 year off work, with pay. The only stipulation is that you need to spend all 365 days living in Madison, WI. What do you do to take full advantage of this situation? I’m looking for where you choose to live, what your weekly agenda looks like, etc. FYI, you are the only one who gets this 1-year sabbatical, so you can’t just bring a bunch of your Chicago friends with you.

Let's get the obvious out of the way: I'm immediately getting season tickets to basketball, football, and hockey. Being in Madison for a year without my friends means I'm gonna need any and all forms of entertainment. Plus I could go to the football games early and try to give Stave advice on how to get rid of the shanks! 'QUIT THINKING ABOUT THE GIRL, JOEL. IT'S ALL IN YOUR HEAD'

As far as a living situation goes, I want to strike that balance of close to everything cool... but far enough away from students that I don't feel old as shit every day when I walk out my door. I wouldn't live down by the Capitol, since that's TOTES an old person move. And that's far as fuck away from Camp Randall. Maybe somewhere like Regent and Charter? That's in between the Kohl Center and Camp Randall, not on the main stretch of campus, and ROCKY'S. Rocky's proximity might trump everything else. That's clutch proximity.

The weekly agenda gets tough. I don't really have any friends when I start this sabbatical, so I think the first step is to join some clubs so I can meet some people in the 26-30 bucket. Is there like a beer drinking, sports watching, terrace sitting club? Adult Hoofers? Should I go to Epic and pretend to work there just to see where they all go? This is really the most important part: without some friends, shit would be boring. Don't get me wrong, AMAZING boring, but still boring. So that would be my top priority.

I can get cute and tell you that I would go to the arboretum or do other adulty nerdy things, but I'd probably just drink and eat my way into an early grave. A one year paid sabbatical in Madison is a DANGEROUS thing for a single guy with a big appetite.


Shirt tucked in or not?

Obviously, you have to tuck your shirt in in SOME situations. These are mine:
Wait I think those are literally the only times I ever tuck my shirt in. If it's a button down shirt with dress pants or during an organized sporting event. I never tuck my shirt into jeans. That's insane. I think if Obama came to my office on a day when I was wearing jeans and a button down, I would MAYBE think about tucking. But then Barack would know I was fat. CONUNDRUM.

SHOULD I have been tucking my polos in to my khakis all these years? Probably. But that shit's uncomfortable. It traps heat. It bunches. And you can't forget a belt and get away with it if you're a tucker. What happens that one random day you forget to wear a belt? You just go untucked? How do you explain that to people? Better to go untucked 365 days a year, so that on that fateful Tuesday in October that you leave your apartment beltless, NO ONE KNOWS.

I have absolutely no idea what's going on.

As I sat down to start writing this, Andersen called a press conference to address Joel Stave's status. Is he hurt? WAS he hurt? If he's not hurt, why isn't he playing? Is he shut down? The answers to all of these questions have varied. He was practicing leading up to the LSU game, so he couldn't have been hurt. But then reports came out saying that he WAS hurt, and that his shoulder was bothering him. But NOW we're being told that he's NOT injured, and he just has a wicked case of the shanks.

In other words, this was our quarterback in practice last week:


And this was our quarterback warming up before the LSU game:

I'll spare you a thousand words on the Tanner/Roy McEvoy connection. Allow me just to say that I'm depressed that I had to use TWO Tin Cup videos for such dire circumstances.

But this wasn't all just limited to Sunshine. I haven't even mentioned the MGIII debacle. His is similar to Stave's, just kind of in reverse: first he WAS hurt with a little hip flexor thing, then he WASN'T hurt and just had some kind of misunderstanding with the coaching staff, but now maybe he does have an itty bitty hip flexor thing? CHRIST. What in the fuck is actually going on in Madison?

I like Gary Andersen. He seems like a genuinely good guy. He seems like he really knows football - especially on the defensive side of the ball. He seems like he's a pretty good recruiter, and it even seems like players enjoying playing for him. But I no longer trust him. There's simply not any good reason to believe the words that come out of his mouth going forward. It's really not that damning of an indictment - coachspeak is a thing for a reason. Coaches have all sorts of motivation to be coy and play games of semantics. I understand that. And if he was doing it to protect his players, then I suppose it's rather admirable. I guess I just thought we had a straight shooter at the helm. That is no longer the case.

With that said, here's what I saw in the LSU shitshow:


Man. I can't get enough of that. What a marvelous individual.

In fact, let's see that again, in SLOW MOTION: