IT IS GAME WEEK.

Every year, we've eased into the season like an old man into a nice warm bath. But did that collection of weak games temper our excitement? Of course not. And if we got worked up over Bowling Green and Northern Iowa, well, you can probably guess how things are gonna go on Saturday when we take the field in Houston against an SEC powerhouse. I don't think I'm being hyperbolic when I say this will basically be a bowl game atmosphere wherever you're watching. Simple math:

Night game + season opener + elite SEC opponent + hot garbage schedule for the rest of the season = this is it, folks.

Don't even bother trying to pace yourself. If you're planning on saving up for some future gameday, you're going to regret it. The hype machine is working overtime and it is completely justified.

CHICAGO BADGERS: If you show up at Will's after 6 pm and get frustrated about a line, you have no one to blame but yourself. Settle in early, have some dinner, guzzle a few beers, play some games, live the high life. Literally nowhere else you should be or anything else you should be doing.

I STILL WANT YOUR REFERRALS: Is this your first time reading the BP? Have you just been lazy before and not emailed me with your friends' email addresses? I don't embrace excuses. Send 'em over. 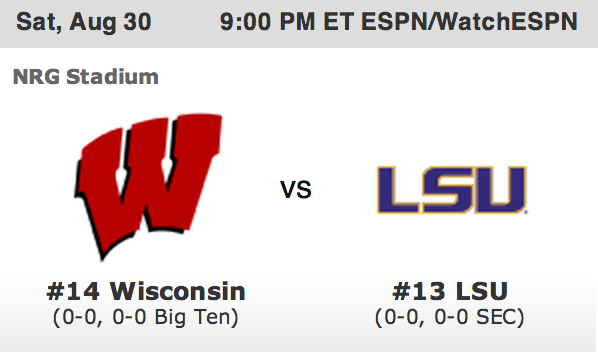 TV: ESPN
WEATHER: GULF MONSOONS BUT I THINK THEY HAVE A ROOF


THE DOWNLOW ON LOUISIANA STATE UNIVERSITY

MIKE THE TIGER LIVES BETTER THAN 99% OF LOUISIANA


LSU Athletics is represented by its mascot, a live Bengal tiger named Mike the Tiger. LSU is only one of two institutions of higher education in the United States to have a live tiger as their mascot; the other is the University of Memphis. The tiger was named after Mike Chambers, LSU's athletic trainer in 1936, and was bought for $750 from the Little Rock Arkansas Zoo.

Important things first: $750 in 1936 is a little under $13,000 today. That still seems pretty cheap for a real tiger. Tigers should cost around a million dollars in my mind. If you're gonna buy some rare, verge-of-extinction jungle cat, you should need boatloads of money. Wisconsin should be able to get a clan of real live badgers for like $800 according to this logic. Maybe LSU just FLEECED the Little Rock Arkansas Zoo. For some reason, I do not have much faith in whoever was in charge of sales at the Little Rock Arkansas Zoo in 1936. I'm pretty sure humans were wrastling bears for entertainment in those days. Could probably buy a bear from the LRAZ for $50 and tickets to a silent picture.

Also, a quick google search reveals that there are not many animal sales positions in zoos these days. FOR SHAME


In 2005, a new $3 million Mike the Tiger Habitat was created for Mike between Tiger Stadium and the Pete Maravich Assembly Center. Its amenities include lush plantings, a waterfall, a flowing stream that empties into a wading pond, and rocky plateaus. The habitat has, as a backdrop, an Italianate tower - acampanile - that creates a visual link to the Italianate architectural vernacular of LSU's campus. 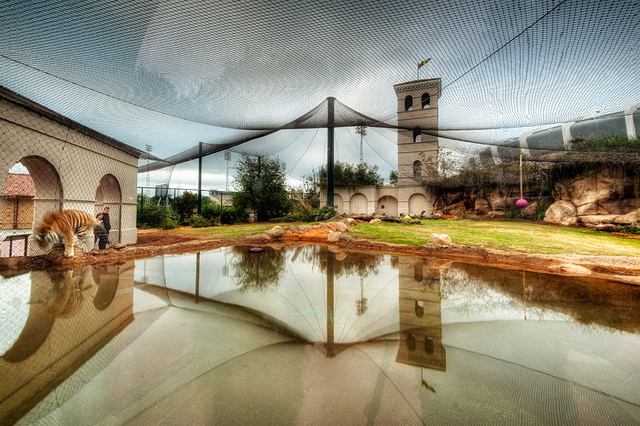 I have questions:
That last part doesn't make any sense to me. I can guarantee Mike would rather have this playpen for a meager TWO million bucks:

All you'd have to do is throw some netting around that thing and it would be tiger-proof. I'm guessing the Italianate tower costs $1.75 million itself. Mike's getting shafted and he doesn't even know it.

Well well WELL. NINE days until Wisconsin and LSU face off in Houston. 9 STUPID WASTING-MY-DAMN-TIME days until the Miller Lite flows and the cheese curds fry and the red bows are red bowing all up in our faces. If we can survive those 9 days that will all feel like Tuesdays, we'll be in store for one hell of a show. I've already decided that the LSU game is going to be AWESOME. We're not going to get blown out. We're not going to blow them out. Nope. It's going to be two pretty gosh darn good teams releasing an offseason eternity's worth of pent-up energy on each other like it's the goddamn Super Bowl.

It's hard to overhype that game. Look at our schedule after it: WOOF. We'll all still be excited on gamedays because that's what we do. But until we're contemplating going to Indy in December to watch us beat MSU, it's a parade of 'meh.' I refuse to get too upset over this, because in all honesty there was basically nothing we could do about it. They did the somewhat logical thing in dividing the divisions geographically. It's not our fault that the teams in the West are hot garbage outside of UW. Wasn't Nebraska a football powerhouse? What happened to them? Iowa? Pass. Northwestern? Probably not a GOOD sign when one of your best players gets suspended and then transfers within a month of the season.

I could ramble on here for days. This won't be the best Badger football team we've ever seen, but they'll be pretty good. And a pretty good team with an easy schedule can make a lot of noise. Just like in basketball, all you gotta do is make the tournament to have a shot. For the first time ever, the same logic applies in football.


CHICAGO BADGERS: In case you've been out of the country all year, there's a new Badger bar in town that looks pretty amazing. It's called Will's and it's actually not new but it IS pretty amazing. Looking forward to another great year at the best Wisconsin bar in the city. Feel free to come say 'hi' sometime and/or chug a beer.

I WANT YOUR REFERRALS: Some of you came through last week, but the vast majority did not. SHAME ON YOU, VAST MAJORITY. Don't hog the BP all to yourself. Shoot me some email addresses and spread the love.

DO YOU LIKE BASEBALL? Probably not since hating baseball is almost as cool as hating soccer. But if you DO like baseball, I highly recommend checking out THE DUGOUT, a podcast hosted by my freshman year roommate. At the very least, click on that link to see a pic of him wearing an old man golf hat. BOLD FASHION CHOICE

Boy this section really got flipped upside down recently.


Can we just establish one fact? The enforcement of the Good Samaritan Law here is BULLSHIT. If someone's getting carjacked at GUNPOINT, you do not go over there and try to help. What, you're supposed to get between a maniac with a gun and some other person's car? That's insanity. Sure, maybe Jerry could've called the cops on his cell phone (can't believe he had a cell phone, what year is this). But that cop had to be 40 feet away while this was going down. If anything, they should be CITIZEN ARRESTING the cop for being so fucking clueless. You know in The Office when they print the watermark of a duck boning a goat? And Creed (quality assurance) finds out who was sick that day at the mill and ends up getting her fired instead of him? That's basically what this cop did. He failed his job, so then he found someone else to stick their head under the guillotine.

This is why no one likes police people. That and because they sometimes ride really scary horses.

PS - Pinette is the fat guy getting carjacked, not the cop.


I had no idea euchre was spelled euchre as opposed to yuker. What is your top-10 list of "why the hell are you spelled that way" words?

1) Wednesday. Anyone who can successfully spell this word without saying, 'Wed-nes-day' in their head is a damn LIAR. I refuse to accept any other school of thought. This word makes no sense and we should've fixed it a billion years ago.

3) Rhythm. I've always thought this word closely resembled alphabetic diarrhea. I'm also guessing people would really struggle with that 'h' in diarrhea, but for some reason I just really know how to spell diarrhea. I wonder if Costanza started that scene with 'diarrhea', but then re-shot it with 'manure'. If you at least kinda know the Seinfeld scene I'm referencing, you need to click on that link.

5) Cemetery. HOW are there no 'a's in this word? There should be at LEAST two 'a's in 'cemetery'. I mean, we're not even touching on the fact that cemetery and seminary start with completely different letters for absolutely no reason. I admire the fuck out of non-native English speakers. This language is IMPOSSIBLE.

6) Receipt. Silent letters. Those are logical. That 'p' really brings a lot to the table.

9) Devastating. Personal struggle of mine. I flip a coin on the vowel after the 'v'. Can easily talk myself into an 'a' or an 'e' there.
10) Separate. Same thing after the 'p'. My brain simply refuses to learn.

My anxiety surrounding this issue is only half-fictional.


I recently shacked up with the beau who some might affectionately describe as the most batshit bonkers Badger fan on the planet.  Any advice on how to appropriately weather the Wisconsin football storm about to sweep through our apartment? Especially need tips on what's to be done pre, post, and during games v. UMich.

Well, first of all, we don't play Michigan until October 1st, 2016. Who knows, you could be PREGNANT by then with little baby Melvin.

Seriously, what if you're pregnant by then? Make sure the kid isn't due until well after football season.

As far as this year goes, a couple things to keep in mind:
It's easy to get along with someone after a win. The real test is seeing how they handle defeat. I assume you'll learn very quickly if your presence is requested after we decide to switch quarterbacks with 2 minutes left in a one score game and then the new quarterback audibles the play for no apparent reason and it blows up in our face. 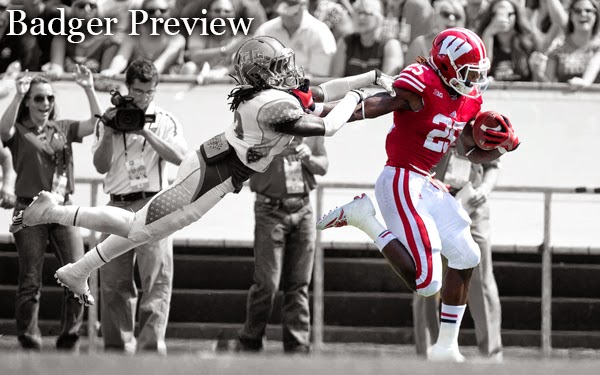 
23 days until Wisconsin and LSU play a REAL football game in Houston. That's it. Three weeks from this Saturday we'll all gather at Will's, daydrink, laugh, and wonder aloud how long it will be until 'Timber' is cool again. I HOPE IT IS SOON. What's in store for Wisconsin in year 2 of the Gary Andersen era? Can UW hang with LSU's ELITE SEC ATHLETES? Will Wisconsin - most likely the favorites in every game after that - run the table? Will GA use his newfangled Twitter account to drop a #karma bomb on Bielema? Is it possible to eat too many cheese curds?

I don't have any answers. But I know I can't freaking wait to find out.


Before we dig too deep, let's kick off the year with a good old fashioned MAILBAG. By now, you should know the drill: send me any and all questions you have. No topic is off-limits. You can ask about:

You know the drill. Get your questions in sooner rather than later so you can have your first Friday distraction of the year next week.

It's good to be back. Shaping up to be a fun year for both football and hoops. Let's do this thing.

Will's is hosting their annual 5th Quarter THIS SUNDAY at 2:30. Bucky will be there. The band will be there. And you've literally never had a bad time at Will's. Add it all up, and it sounds like a nice little Sunday Funday.

ONE LAST THING: Beginning of the season is always a good time to make sure your friends/cousins/siblings/PARENTS/significant others/co-workers who went to Wisconsin or are Wisconsin fans are on the list. Send me any referrals you got. Thanks in advance.