I'm still on the bandwagon, but the bandwagon took a sudden turn recently. We're no longer trucking along towards a Big Ten title. A top-4 finish in the conference is possible, but no longer likely. So do you know where the bandwagon is heading now, on this new route? Straight to the Final Four.

Because we are officially the BIZARRO BADGERS: 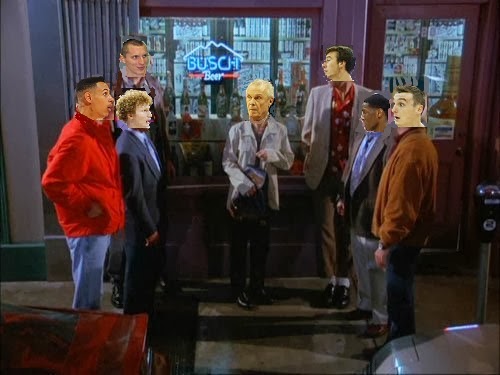 
Before? Churn out enough wins to finish in the top-4, win a game or two in the tournament, and get eliminated by a hot shooting team. Now? Slide into March after a disappointing conference season, shock the world, BE that hot shooting team.

It all makes way too much sense. Bo finishes in the top-4 of the Big Ten every single year. And every single year, we come up short in March. Now he's gonna finally break that top-4 streak, and the only logical consequence of that is a deep run in the tournament. THIS IS HOW I SLEEP AT NIGHT.

I'm obviously disappointed in how quickly this whole thing came unraveled, but I will never jump ship. As long as Bo is the conductor (I'm just mixing and matching train and boat metaphors, deal with it), I'm down for whatever. Let's get all the shitty play out of the way now. The pressure to win a Big Ten title has subsided. Tighten up that D, and by March, the shots will be falling again. I feel it. In ma bones. UP IS DOWN. DOWN IS UP.

PS - Just now realizing after spending far too much time massaging that picture into existence that I should've put this year's team on the Bizarro Seinfeld clan instead of on the normal Seinfeld clan. UGH

PPS - I still don't know if the opposite of 'hello' is 'goodbye' or 'badbye'. Elaine was just fucking with Jerry, but she accidentally made a really intriguing point. 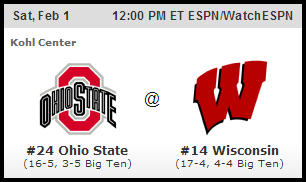 Okay. I can't lie to you this week and tell you not to worry. You can if you want. I'm not sure what the hell we're doing out there right now, but it's not defense. And I get that that's worrisome.

But I'm sticking with this team.

Defense can be corrected, and taught, and fixed throughout a season. Mental mistakes can be cured. But you can't take a bunch of bad shooters and suddenly have them draining shots left and right. Last year's team was limited by the fact that the 3 starting bigs couldn't shoot. THERE WAS NO FIXING THAT. This year, however, we've got shooters up and down the lineup. Unfortunately, they forgot how to play some D. But if there's any coach out there that can figure that out, it's Bo.

These last 3 games have been awful. What the fuck ever. Worse teams have gone through worse stretches and come out ahead. We'll be fine. I'm not abandoning ship anytime soon.I have NO idea why I make so many ship analogies.

PS - Hate the world, don't feel like typing, get ready for a million pictures.


DO YOU LOVE GOOD BEER AND GOOD PIZZA? I do, too! And that's why I've already purchased my ticket to Beer & Pizza: A Love Worth Celebrating 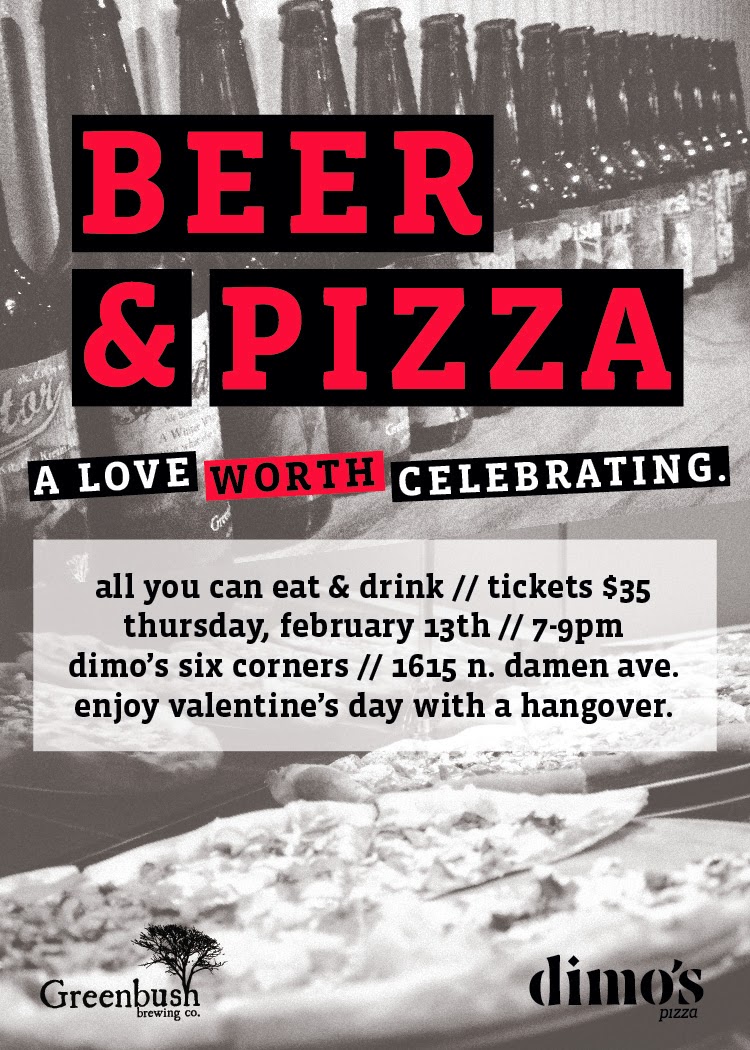 PS - I tried making a quick flyer myself and I am not a graphic designer: 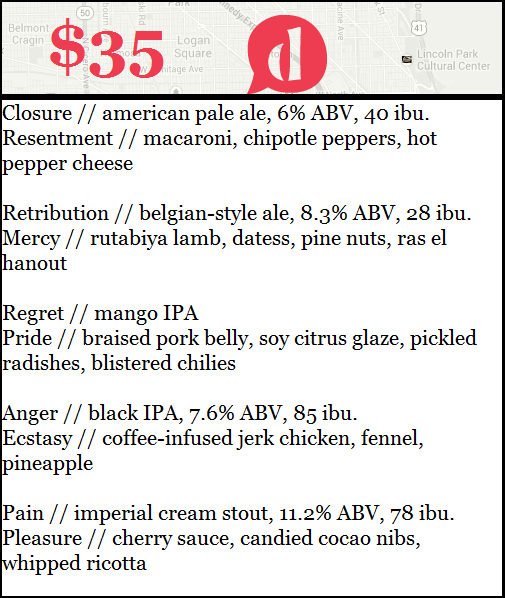 My flyer may suck, but at least that menu looks killer. CONTINUE »
Posted by Schwa at 6:58 PM No comments:

Whatever. I got over that IU game about 10 minutes after it ended. Do you know why?

1) We weren't going undefeated this year. I'm sorry, but as good as this team is, it's just too damn difficult to go through the Big Ten grinder without tripping up. Indiana had two top-5 picks last year and lost 4 times in Big Ten play - including road losses to mid-tier Illinois and Minnesota teams. These games happen.

2) They probably won't admit it, but there must have been some crazy pressure to keep all these streaks alive. 16-0 on the year. 12 straight against IU. Undefeated in conference play. Add it all up, and the result is a collective exhale. 'Okay, that sucked, but it's time to just ball out and not worry about streaks and records.' In my head every player on the team said or thought that after the game Tuesday night.

3) The road to a Big Ten Championship still runs through Madison. At WORST, we split with Iowa. And then MSU and OSU have to come to the Kohl Center. You couldn't ask for a better schedule. This obviously guarantees nothing, but you'd rather have our schedule than anyone else's.

4) I don't really care what seed we get, as long as we play in Milwaukee. Is the path to a protected seed in Milwaukee any more difficult to travel after last night's game? Not really.

5) I'm totally in favor of students rushing the court, even more so when it's Indiana storming after beating Wisconsin. Did any of your parents go to UW? If so, ask them if they ever, in a bajillion years, could have imagined Indiana winning a home game against Wisconsin and rushing the court to celebrate. We may not have the banners (and go fuck yourself if you brag about them and you're under 30 - you either weren't born yet or were too young to know what a basketball was), but we have the year-in and year-out success that Indiana craves. 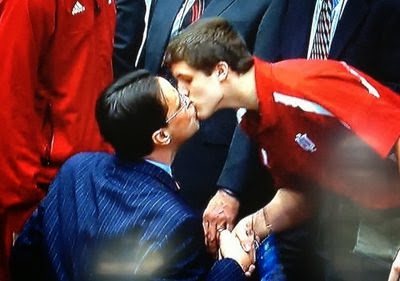 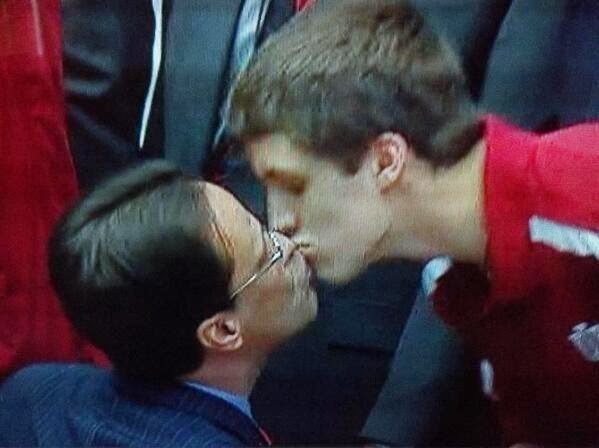 Does it suck having that first loss come at the hands of CREAN? Of course. But this has been an incredible season so far, and there's so much basketball yet to come. The Road to Milwaukee resumes on Saturday. Michigan's coming to town, and WE DON'T LIKE THEM.

PS - Is Crean shaking his son's hand in that pic? If so, MAN ARMS ALERT. Also, who does Crean think he is pulling off this handshake-lip-kiss move? I don't even know if there's a relationship out there that would make this move look normal. Either you're not very close with a person and you shake their hand, or you're close enough with them to smooch so you incorporate a hug if you need more physical contact. Handshake-lip-kissing your teenage son is so bizarre that I'm starting to think it's some kind of LONG CON. Can't trust Crean. 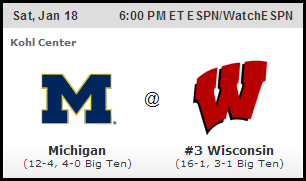 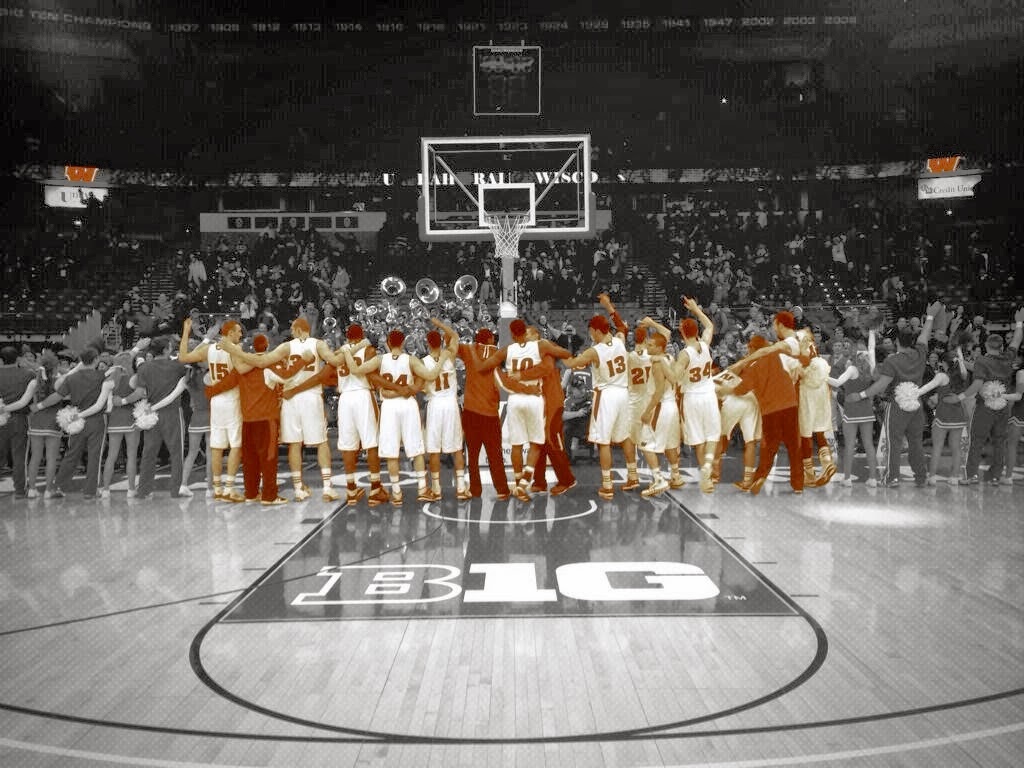 WHOA HEY where'd Camp Randall go? Well, Camp Randall is in HIBERNATION because we get to put that somewhat-mildly-disappointing football season behind us and focus on the holy shit we're 16-0 hot-ass Badger basketball team.

And I LOVE this team! I do! They're awesome in pretty much every way imaginable. I've already alluded to this, but forget their skills and abilities - these kids are out there smiling, joking around, and reminding everyone that playing basketball is, at its core, supposed to be fun. AND I LOVE DOING FUN.

Of course, it's much easier to do fun when you're doing a lot of winning (#WinningIsFun - official Secondary Hashtag behind #OnWisconsin. Feel free to use #wiscONsin as you see fit.). And I know, most people are just now transitioning to basketball mode. You may have watched the last couple games, or saw that we were ranked in the top 5. But I'm here to throw in some extra BONUS FACTS so that you can pretend to be an expert.

BONUS FACT #2: Wisconsin's 16-0 start is the best start in school history. I guess we had a couple of 15-0 starts back in the ROARING TEENS of the 1900s. I don't even get why they compare anything these days to those ancient decades. There's no way that 'basketball' was remotely entertaining. It's like Minnesota bragging about their football national championships. If it's so old that the players graduated and then enlisted for the war - the FIRST war - then I don't give a fuck.

BONUS FACT #3: There are two Tom Creans on the internet. One of them is this badass explorer who conquered Antarctica: 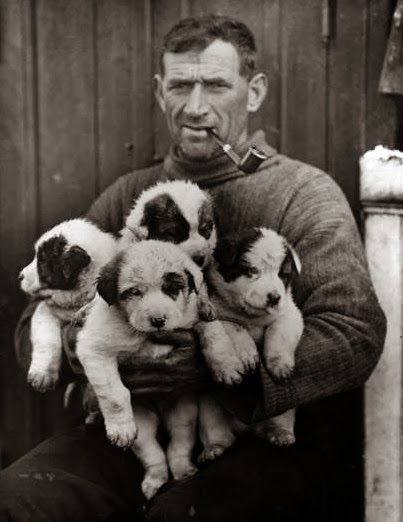 Oh yeah, the other Tom Crean. This warweasel: 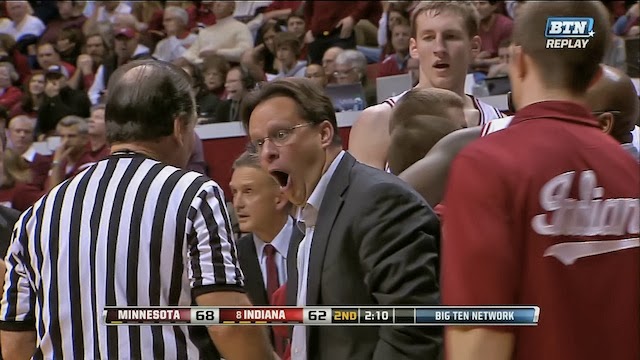 PS - If nothing makes you look cooler than smoking a cigarette, then nothing makes you more of a badass than ripping an old pipe like that. I'm dying to know if he was originally just sitting there smoking his pipe and the photographer refused to go near him unless he held a bunch of puppies, or he was sitting there holding a bunch of puppies and refused to have his picture taken unless he could badass it up with his pipe.

PPS - Seriously do any shelters in Chicago offer sled dog puppies because you can sign me up for like 14 of them.

PPPS - If there isn't a hipster in Wicker Park trying to arrange a sled dog shuttle service, then I don't want to make fun of hipsters anymore.


CHICAGO BADGERS: A 6 PM game on a Tuesday is a real kick in the dick. Tuesdays are the WORST.

HERE'S A FULL SIZE VERSION OF THAT PICTURE I EDITED: In case you want to MARVEL at my craftsmanship. 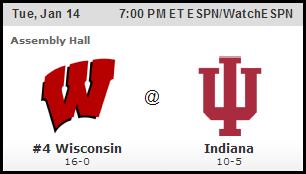