It's exhale time. Let it out. All that obnoxious pressure of going unbeaten is out the window. And if we the internet nerd fans feel that pressure release, one can only imagine the tension dropping in the locker room as well. So let's address some facts:


BELIEVE that. Run the table, beat an undefeated Ohio State on a neutral field, and anything is damn well possible.

For that to happen, however, UW needs to go into Iowa City on a Saturday night and stuff the Hawkeyes into a barrel and bury them in a cornfield. This was a huge game 3 weeks ago; it's an ENORMOUS game now. I like to think Chryst's pregame speech goes beyond his usual 2 sentences and gets the guys fired up like we haven't seen before.

Last week was rough. But there's all sorts of opportunity and season left. I don't plan on letting that game ruin my enjoyment of this season, and you better not either. Back on the horse. Bury the Hawkeyes. LET'S go!

You want my honest opinion? That was a perfectly boring season opener. Second half was a total snoozefest. And this is NOT a complaint. I'm fine with that. What do you really want to see in non-conference games against scrubs? Minimal injuries, young players making plays, and a comfortable cruise to the finish line. CHECK CHECK CHECK.

Plus, we have more important things to discuss:

You've all probably seen this by now: a woman at the U.S. Open was caught on camera dunking her chicken tenders into an ice cold coke. On the surface, this appears to be a criminal offense. Why take what appears to be a surprisingly meaty stadium tender and dunk it in sugar water before taking a bite? Even IF they were out of all normal dipping sauces, you just go raw dog on a tendy. But this is the OBVIOUS way to react to the situation. I'd like to consider some reasons why this woman is fit to supervise children:

1. This could be a 'don't knock it 'til you try it' situation. Have any of you ever dunked a tender in coke? NO? Then how do we know it's not bizarrely delicious? If the first person to dunk a french fry in a chocolate frosty was caught on camera, they probably would've been disowned by their family. Would you ever dump a milkshake on a baked potato and go to work? Of course not! But hot damn if a fry in a frosty isn't a salty-sweet moment of bliss. CONFESSION: I've dunked a nugget or two into the frosty as well. Why should the fries have all the fun?

2. Maybe she has really soft teeth? 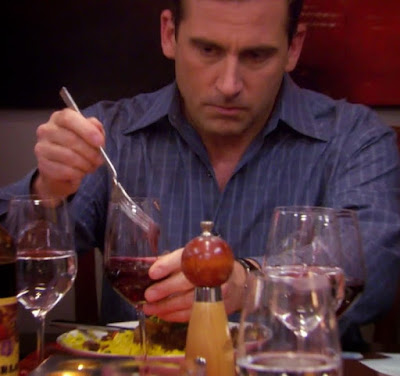 3. She was the victim of a sneaky camera operator at a moment of vulnerable, harmless quirkiness. One of my BIGGEST fears is being caught on camera picking my nose at a sporting event. I DON'T WANT TO BE A MÉMÈ. Are we just victim shaming this poor woman who was OUTED trying to cool down some piping hot tenders on a hot late summer day?

4. We've all gifted her the easiest Halloween costume: 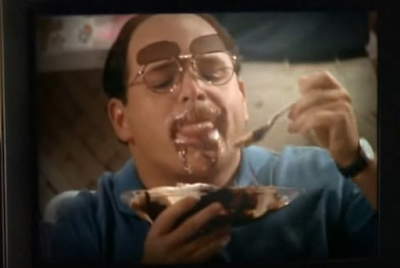 She shows up to a party in full Costanza gear with some ice cream and she immediately topsy-turvies an embarrassing moment into a brilliant act of self-awareness. I spend my entire life trying to come up with a decent Halloween costume, and she's been handed one on an ice scream-soaked platter. Live it up.

5. I am dunking a chicken tender in a coke as soon as I can. Seriously. I have to know what this life is like. I have to walk a mile in her cola-drenched chicken finger shoes. First time you see someone cutting a candy bar with a knife and fork you think they're insane. Come back a week later and you're the only person using your hands like a savage. I know which side of the bandwagon I wanna jump on.

UPDATE: I'm gonna be honest with you and tell that it's closer to good than bad: 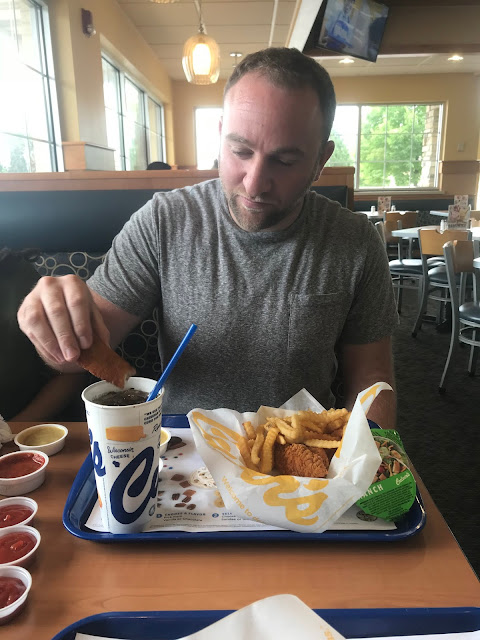 Obviously I dipped a few curds and some fries in there to see if we really have a trend on our hands. I can't say I'll be dipping my tenders in coke going forward, but I did find myself going back for a few extra dips at the end just to really soak it all in. Color me slightly pleasantly surprised.