Let's get one thing straight: it's NEVER fun to lose a heartbreaker like that game against Kentucky. Especially when the stakes are so high. But I moved on pretty quickly, and I think you should, too. Bo got the stupid 'can't make a Final Four'/'can't beat a higher seeded team' monkey off his back. The hoops program got all sorts of attention and the publicity that comes with Aaron Rodgers jumping on your bandwagon. And I'm not sure how much this will help recruiting, but it sure as hell won't hurt it.

This run was a good thing. A GREAT thing. Do I know for a fact that we would've beaten UConn on Monday night? Absolutely. Not a doubt in my mind. But I'm not gonna dwell on that 'what-if', and you shouldn't either. The weather's FINALLY turning (I think), Big Star's patio is calling, and we return over 80% of our scoring/rebounding/assisting next year. This program didn't peak in Dallas. It just took one enormous step towards the next level. Enjoy it. We're not going anywhere.

With that said, let's wrap up this season in the only way I know how: MAILBAG CITY. Leave your question in the comments or email badgerpreview@gmail.com. No topic is off-limits. You can ask me about:
And so on. Dig deep and hit me up. Don't make me come looking for you. 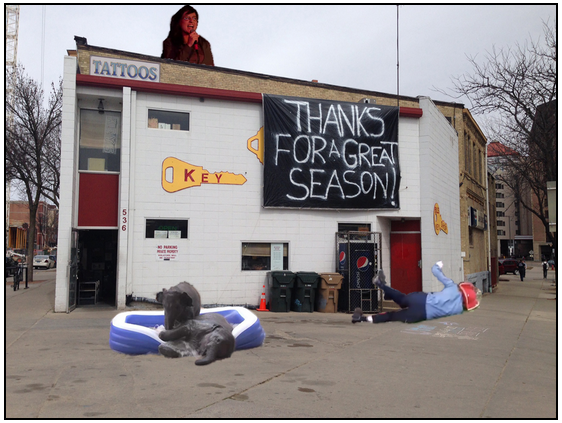 PPS - How I felt watching Harrison hit that shot:

PPPS - If you didn't notice his eyes after he falls, then watch it 7 more times.
Posted by Schwa at 8:22 AM 1 comment: 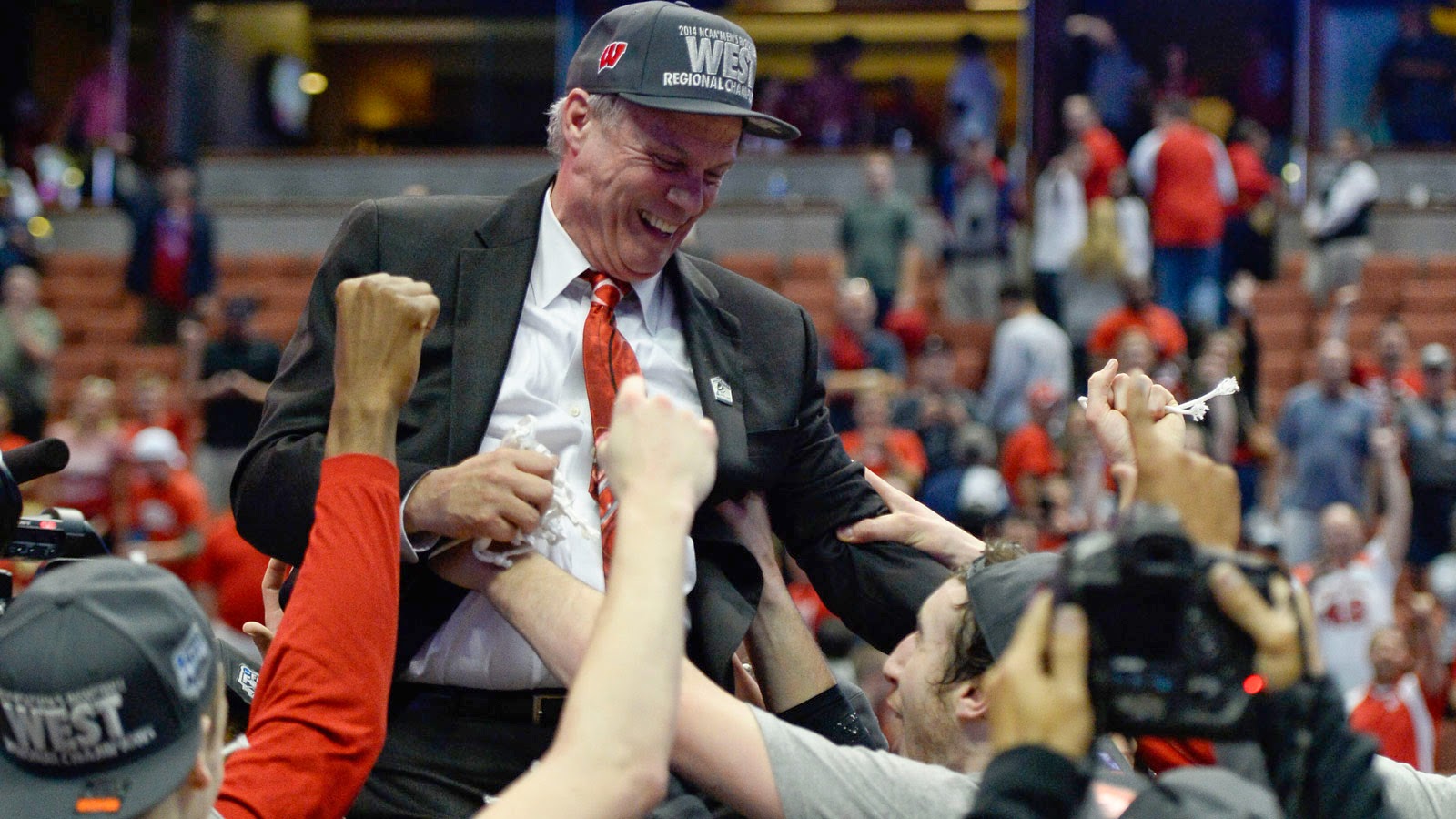 I can't even tell you how happy that picture makes me. As a Badger fan, I'm ecstatic that we won both games last week and reached the Final Four. As a fan of this team, I couldn't be happier.

But as someone who thinks Bo Ryan is essentially the greatest human being on the planet, this is pure ecstasy. I couldn't even begin to count the number of times I've heard someone say he'll never get to the Final Four. I've wanted to rip my own ears off every time someone's told me his style wouldn't work in March. He needs to recruit better athletes if he wants to make a run? Yeah. Sure. Whatever you say.

At the end of the day, getting to Dallas doesn't validate Bo as an elite coach. He's shown that year after year. You don't win 4 DIII titles, finish top-4 in the B1G every season, go dancing every year, and have the highest winning percentage in B1G history without being one of the best coaches ever. If the idiots out there needed this to happen to realize that, then that's all you need to know about them. The rest of us have known for a while that we've got someone special leading the way in Madison.

IT'S TIME TO TALK KENTUCKY. I DO NOT LIKE THEM.
1) Orange. Duh.
2) Red. Mental warfare. Someone hits free parking and then rolls a 3. Demoralizing.
3) Fuchsia. So sneaky good. Catch someone coming out of the clink and you make them YEARN for stale bread and a steel bed.
4) Light blue. Get hotels. Get paid.
5) Green. Mental warfare part 2: people will start praying they go to jail instead of visiting your properties. Kinda like I'd rather go to jail than spend a week in Ohio.
6) Yellow. Vermont Avenue, money.
7) Purple. Why not.
8) Railroads. I buy railroads about as often as I tip bathroom attendants.
9) Utilities. For the real back alley swindlers.
10) Royal blue. The fuck if I've EVER won a game loading up on Park Place and Boardwalk. It costs $9 million to get hotels on them, no one ever hits 'em (MOTHERFUCKING LUXURY TAX), and you go broke waiting for someone to make you rich. They're a goddamn scam. Have you ever seen Boiler Room? Park Place and Boardwalk are the stocks those scammers push on people.

A doctor who has been accused in civil suits of unnecessarily branding the uteruses of several women while performing their hysterectomies. The letters - UK referring to his alma mater - were allegedly used to show orientation during the laparoscopic procedures. As of 2008, there have been no trials or settlements.

I'm only mildly concerned that my biggest takeaway from that is that the plural of 'uterus' is not 'uteri'. Oh yeah, kinda fucked up, but (oh god) I wonder if they mark ALL uteri in some way, and Dr. Guiler just added a little flair to the job? If branding uteri for orientation purposes is an accepted medical maneuver, then I can almost sorta understand this. What's the different betwixt and arrow with 'this way up' and a Motion W? Okay, moving on.

PS - I looked it up and apparently 'uteruses' and 'uteri' are both acceptable.

PPS - I'm not entirely sure what a hysterectomy is, but in The Office a nurse made a joke about Meredith's and that made me think it's removing a uterus. I am not googling this. 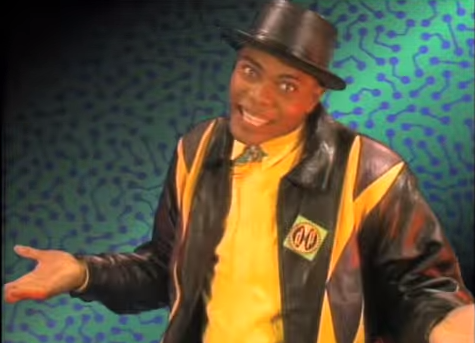 Well isn't that just fucking incredibly terrible. I know at some point in my life, I've seen this before. But I didn't remember it being a fucking 9-minute-long video. I also didn't realize that BIG MEDIA has been fighting off internet pirates since the Floppy Era. That's crazy. It's also kinda sad that back then, they couldn't fight fire with fire, so they fought fire with HOT FIRE. MC Double Def DP must be the most accomplished rapper ever to emerge from Kentucky.

PS - GUESS WHO'S BACK

AAHHHHHHHHH. YES. DP is BACK and hotter than ever! It's fucking slaying me that they don't say the word 'floppy' anymore. I know the real reason is because floppies are extinct, but if you pretend that it's the radio edit of the song and they really are dropping a filthy word there, it's MUCH more entertaining.

PPS - Everyone lost their shit over Nicki Minaj's verse in 'Monster', but I honestly think BSheba's verse in 'Don't Copy That 2' is better. 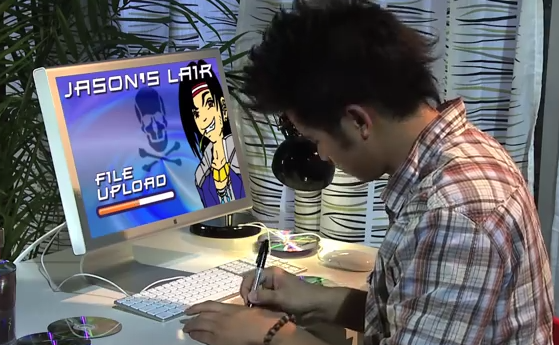 NEVER IT NEVER GETS OLD


CHICAGO BADGERS: Can we top last week at Will's? I think so. Show up a little earlier (you do not want to wait in line), settle in, have a few beers, play some games (someone please bring Battleship), and do everything you can to pass the time until tip-off. It's going to CRAWL, but you might as well start getting drunk and having a good time while the clock slowly ticks towards DESTINY.

WHOA HEY LOOK WHO'S IN THE CHICAGO TRIBUNE: It's me!

PS - Higher on the page than Beyonce, no big deal.