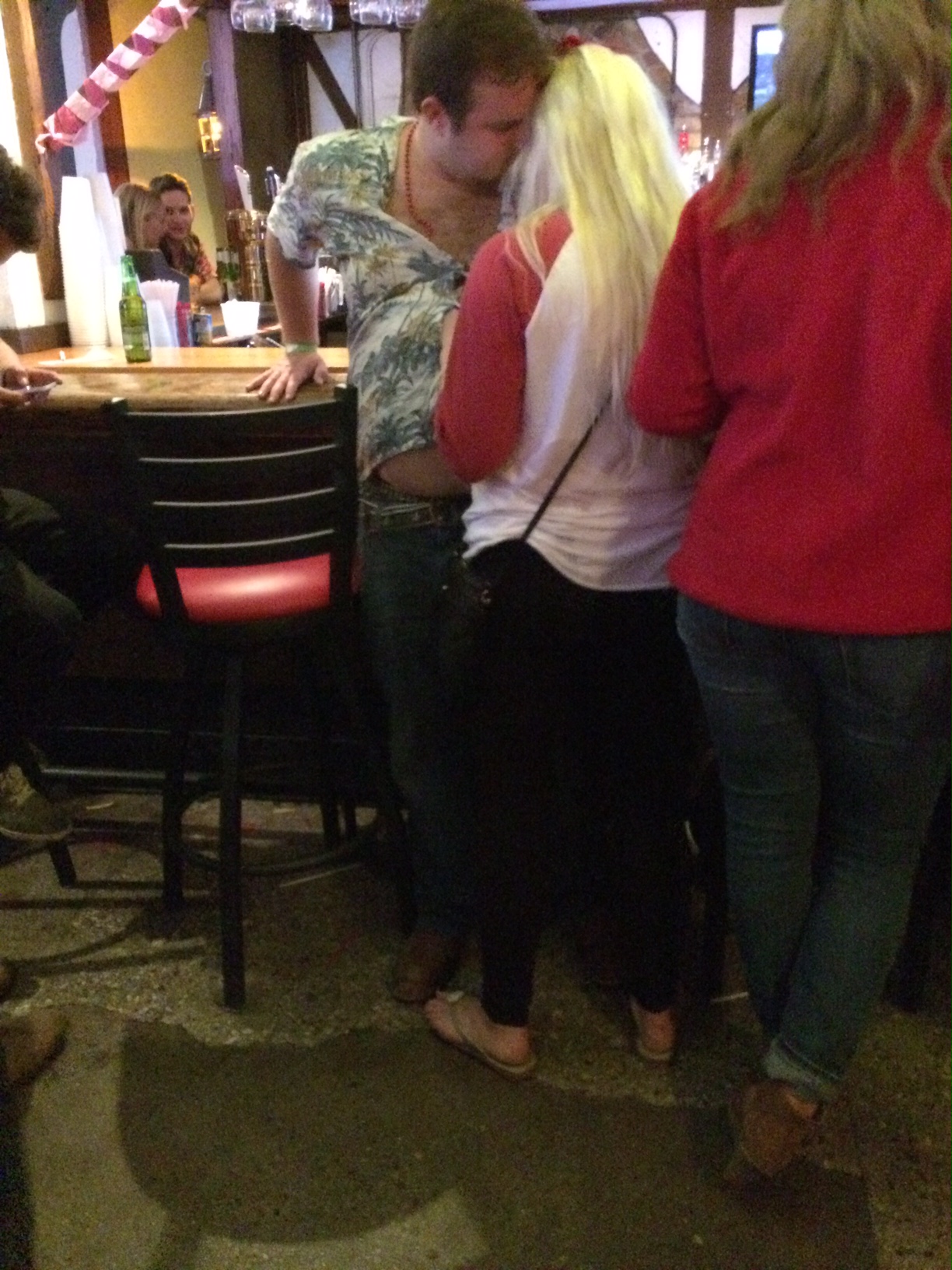 FYI her hand is up his shirt there. That giant man has a shirt held together by the two middle buttons, which is some kind of sorcery. It's also in the most visible part of the KK (front bar, right by the entrance). Eventually one of her friends came by and gave her the 'I think you're really drunk and should go home before you accidentally have sex on top of the bar and people take Snapchats of it, k hun?' speech. That's both the best and the worst friend possible. We may or may not have booed her.

PS - If you think I've been doing anything other than listening to Shake It Off while shakewriting this entire section then you're out of your damn mind. If my friends from Will's are reading this, I think we know what the new pre-game song has to be. TIMBER OUT. T-$WIFT IN. #ONSHAKESCONSIN

CHICAGO BADGERS: Post-Halloween 11 AM gamedays really separate the men and women from the boys and girls. Don't be a boy or girl. Be a man or a woman. 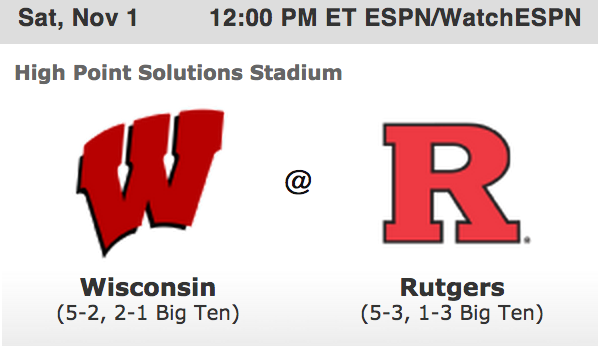 So I'm going up to Madison this weekend. I'll probably end up at Camp Randall for the game, and I'm sure I'll drink a million beers regardless of where I go. But on an email chain planning out the weekend, one of the guys tossed out going to L'Etoile Friday night for dinner. Couple problems with this in my mind:
I'm aware that I'm in the minority for that. Everything dictates that because this is a really nice, fancy place with a chef that people have probably heard of, the experience would be OUT OF BOUNDS. But I don't dig on that. I'm also a firm believer that when you have a group of 8 bros, you don't need to spend every waking second of a weekend trip together. I have zero intention of preventing the group from feeding each other pan-seared scallops with asparagus puree and a sprinkling of deconstructed zucchini pasta HAND-CRAFTED by Chef Moinsoreé. If you get down on that, power to you.

But I'll be much happier with a fine Sausage pizza thrown in the oven by Chet, the sophomore from Janesville working the Friday night shift at the Rocky's on Regent. You can get fancy Maine lobster with buttercup squash beurre blanc ANYWHERE. Rocky's sausage is UNIQUE and not available in Chicago and therefore I WANT.

PS - It used to be 'How do you know you don't like it? You've never tried it!' Yeah well I've started trying all this fancy shit and I just don't like it. #TeamRockys4Life

PPS - Pretty sure for $20 you could eat like a king at Rocky's and drink like 5 beers. I don't know how anything could make more sense.

3xPS - If I make it through this entire weekend without getting Rocky's, I will be MOST
disappointed.


CHICAGO BADGERS: I think the LOFOMO (Law of FOMO) should make me want everyone to stay home and be boners since I'll be gone. But that's crazy. Go get your Wills on. 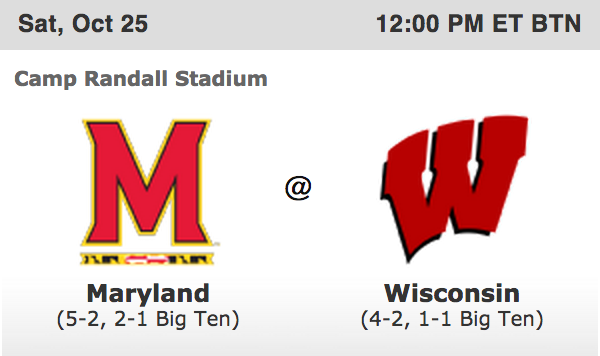 CONTINUE »
Posted by Schwa at 6:34 PM No comments:

UGH. Every inch of that game was exactly the miserable experience I expected. It wouldn't be a trip to Evanston without shitty weather, a sloppy game, overeager nerds, and a final score that makes you wonder how it was all possible. How does a team with Melvin Gordon rushing for 259 yards on 27 carries only score 14 points? How does a team that rushed 25 times for 50 yards the week before go off for 203 yards against what was a stout Wisconsin defense? How did Gary Andersen and Andy Ludwig watch Tanner McEvoy throw the ball during fall camp and decide that HE would be the starting quarterback? Oh, I know the answer to that last one! "We want a mobile quarterback who can make plays with his feet."

WELL THEN MAYBE YOU SHOULD CALL PLAYS THAT UTILIZE HIS ABILITY TO MAKE PLAYS WITH HIS FEET. Read options, options, rollouts, bootlegs... you know, plays where a mobile quarterback can actually be lethal? Why don't we do any of that? Instead, we get a mobile quarterback with 1 rushing attempt for 8 yards and 10 passing attempts for 24 yards. That is on the coaches. It's not McEvoy's fault that he can't throw the damn ball. It's Andersen's and Ludwig's fault that they put him back there and asked him to be a standard pocket passer. NOT HIS STRENGTH. Here's what I saw in that Northwestern game (I was drunk and haven't re-watched it and have no desire to do so):

There are probably 17 more 'uglies'. I'm over this game. Hate it. Done with it. Don't like its face.


CHICAGO BADGERS: I'm sure the turnout at Will's for an 11 AM game on the heels of the debacle in Evanston will be super. This is my yearly reminder that yes, even as shitty as they look, you'll YEARN for these gamedays once they're gone. Don't let a silly little thing like a hangover hold you back. Chug water, pass out, scalding hot shower, greasy food, Sugar Ray, BOOM, no more hangover. It's worked for centuries. 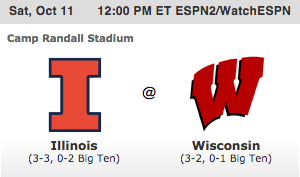 TV: ESPN2
WEATHER: 50s, MOSTLY SUNNY, SMALL CHANCE OF TEARS BECAUSE I WILL LITERALLY CRY IF WE LOSE TO ILLINOIS

Who's ready for a QUARTERBACK CONTROVERSY?


"I feel a lot better than I did about a month ago," [Stave] said. "Obviously, everything around that time was pretty emotional for me. I was upset and frustrated and everything that goes along with it. That's something that I had to work through, but I feel like I did a good job with that."

"If things start to go bad or Tanner gets hurt, through this whole thing I've prepared mentally like I always would," Stave said. "I've watched film, taken notes and done what I need to do to feel like I have a good enough feel for the defense. So just continue to do that. If my number is called, then I'll be ready to go." (via)

Listen, we've seen the Tanner McEvoy show. It IS pretty cool having a 6'6 quarterback who can run and juke and take a hit. But it's kind of a lot cooler having a quarterback who can throw the ball with at least a TINY chance of hitting the receiver. Too many times we've seen McEvoy miss WIDE OPEN receivers. That's probably the most frustrating part: those 'layups' that Andersen is so adamant about completing are being missed with glaring inaccuracy. I will ALWAYS believe that if Stave was named the starter for the LSU game, he never would've gotten the shanks, and we would've won that game.

That's why I'm hoping Stave can get his head on straight and work his way back up the depth chart. This offense will NOT be able to thrive against Nebraska, Iowa, and maybe not even against Northwestern this weekend if it's purely one dimensional. Our running game is our bread and butter, but without the play-action throw as a viable threat, we're going to hit troubled waters. I do not like troubled waters.

So keep on keepin' on, Stave. It may be cloudy now, but the sunshine will poke through soon enough. Please.


CHICAGO BADGERS: Well, how about that? Will's IS providing bus transportation to the Northwestern game this Saturday. The tentative plan is to leave Will's around noon, get dropped off near the stadium, and then bus on back after the game. Price will be $25 and include beer on the bus. If you're interested, send me names. Also, if you have extra tickets to the game itself, let me know. 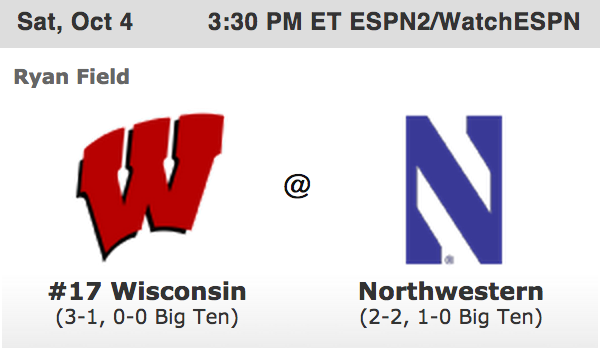 CONTINUE »
Posted by Schwa at 6:14 PM No comments: