PRESENTED BY VIZIO, DO NOT FORGET THIS.

Feels good to have an actual football game to talk about, doesn't it? After weeks of emotional roller coasters, baseless speculation, and unease over the future of the UW football program, things have settled down. We have a head coach. He's building an impressive staff while retaining some key guys. And now, we're less than a week from Barry Alvarez leading the team out one last time to take on Stanford in Pasadena.

I don't care that we've lost 5 games and people are hating on us. I really don't. It's not our fault that OSU cheated and then was too stupid to give themselves a bowl ban in a down year. It's definitely not our fault that Penn State did all the terrible, terrible things that they did for years. We can't control that. All we can do is play the games on the schedule, and that's exactly what we're going to do.

So how important is it to win this game? I know it's the Rose Bowl and for some, that's inherently a big deal. But given the whirlwind of crap that has engulfed the program over the last month, couldn't we all use a nice, high-note ending to a tumultuous year? Don't we want Barry to re-retire with a FOUR and OH YEAH record in Rose Bowls? Shouldn't we enter 2013 with some serious momentum as we return an abundance of talent and break in a new coach? I SAY YES YES YES.

CHICAGO BADGERS: Mention the Badger Preview at the door at Will's and receive an extra raffle ticket! Actually, I'm just kidding, that's not real, they're not gonna do that. But you can imagine what it'd be like if they did, right? Let's be honest, we're only going to Will's until I win the damn raffle. Once I win (and you know I'm gonna win the worst item possible, like Bucky toe shoes or something horrifying), you're free to go to other bars. But until that day, we will go to Will's. I will try to take over the jukebox. And we will have a good time. This paragraph is chock full of guarantees. 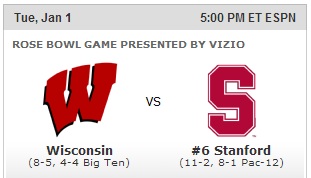 TV: ESPN
WEATHER: 60'S AND SUNNY, BY LAW I THOUGHT IT HAD TO BE AT MINIMUM 94 DEGREES WHEN YOU TRAVEL TO CALIFORNIA IN JANUARY, SO THAT'S OBVIOUSLY WRONG

This could be the last thing you read before the world ends. Let that settle in. I'm gonna go get drunk, because I plan on riding off into the sunset completely hammered. Thanks for your questions. Rose Bowl Preview next week. On with the show...

Maybe this makes me an idiot, but I don't understand floods. Shouldn't all that water KEEP FLOWING somewhere? Humor me and pretend the earth is flat for a second, because the amount of land affected by a flood is small enough in the grand scheme of things that the slight curvature of it is immaterial. I SOUND LIKE A SCIENTIST. Anyway, I don't care how much water is pouring in, but how the hell does it accumulate that quickly in one condensed area? Even with all the buildings and trees and cars and other obstacles, why doesn't it keep on rushing out of there? Is there a minimum amount of water flowing in at a minimum amount of speed to make flooding a thing? Anyway, I would just hop in a kayak and get my aerobic exercise in for the day. No biggie. Applicable Movie: Titanic. A flood on a boat sounds super spooky.

Aren't earthquakes really only unpredictable if you live on a fault line? I think that should be on any property listing: School district, square footage, proximity to fault lines. Applicable Movie: Knocked Up. Where I learned that earthquakes kill more bongs per capita than people.

If you live in the shadow of a giant volcano, I'll assume that you have your volcano escape plan memorized and ready to execute should the mountain start steaming. But still, nothing is stopping the volcano from doing a MIDNIGHT SNEAK ATTACK a la Pompeii. I keep thinking they should've realized that shit was getting wrecked... but how would they have known? Volcanoes are kinda silent killers in their own right. Do you hear volcanoes erupting? I have no idea because I've never been within dying-by-lava distance of a volcano. At the same time, I would LOVE to make some s'mores over a nice lava pit. Applicable Movie: Dante's Peak. Why didn't the town listen to Pierce Brosnan? Grandma wouldn't have had to trudge through an acid lake (is that a real thing that happens?) if everyone just heeded Pierce's wise advice. Dude was in tune with volcanoes like Emilio Estevez knew that the ice could hold a limo in Mighty Ducks. You don't question this kind of genius.

The only reason hurricanes aren't more terrifying is because they're probably the most predictable out of all of these disasters. Days before a hurricane makes landfall, we get weathermen everywhere showing us the badass hurricane symbol's path towards land. Obviously, once hurricanes get there they fuck shit up. No one denies this. But compared to the other destruction machines, we can at least say, 'Hey, hurricane a comin', prepare yourself cuz it's about to get weird.' I really hope Lake Michigan cannot spawn hurricanes. Applicable Movie: The Perfect Storm. Only thing worse than one hurricane is three hurricanes having an orgy on your fishing boat. Every time I watch that movie (not my fault it's on TNT every other week) I trick myself into thinking they're gonna make it. Yeah, no problem, George Clooney saved lives in an emergency room, he killed vampires, he stole Kuwaiti gold, he can captain a small fishing vessel through a triple hurricane. HE GOT THIS.

CONTINUE »
Posted by Schwa at 8:32 PM No comments: