Remember last week when I said the Utah State game was the ultimate game no one will remember in a few months? I'd like to update that to replace it with the FAU game. I almost had to check a schedule to confirm it was indeed FAU that we played last week.

Part of that is that I was in Omaha for a wedding, and due to some domestic compromises I was not able to watch the entire game. But that's okay! I think I mentioned a few years ago that as much as I love Badger sports, I no longer feel the driving need to schedule and revolve my life around games.* There are only so many weekends before it gets arctic in the Midwest, and dedicating every one of those to a sport where 80% of the time we'll just roll over inferior teams is a young man's game.

As I'm writing this I realize how lame this sounds. I can ASSURE you I still enjoy drinking 17 High Lifes in a sea of red before the sun goes down. That hasn't stopped being fun. I promise. And I WAS super hyped for this game a few months ago... until BYU came out looking like basura, and now our only chance of a decent non-conf win is thwarted. At least the game is at 2:30. That's late enough to roll the good times right into the evening. Take advantage of that.


*Obvious exceptions exist. Not all games are created equally, and I will certainly go out of my way to make sure I have unimpeded viewing for big conference games, games with playoff implications, etc. But you reach a point in life when FAU in September is not must-watch appointment viewing. Life... finds a way.

This is one of those songs that I feel would be really good in a movie after the feel-good ending, right as it kicks to the credits.

4. Michigan, 2-0 (0-0). Their stumble is going to be marvelous and I hope there are 500 shots of crying Michigan fans on TV when it sets in. I want tears and I want them by the gallon.

5. Ohio State, 1-1 (1-0). People are such babies. Why on earth does Baker have to apologize for the flag planting (if you call it FLAGGATE you get 10 moron points)? They won a huge game and celebrated a bit. It's not like Brutus I was buried beneath the 50 yard line on top of the grave of the founder of Ohio. Get over yourselves. You lost. You don't want them dancing? Keep them out the damn end zone.

6. Iowa, 2-0, (0-0). Iowa/Iowa State seems to always be entertaining. It also kinda gives me some hardcore rivalry jealousy. It's different when it's intrastate. That's why the UW/ Marquette series is always so full of HATE. Mini civil wars bring out the worst in fans, and I hereby DEMAND that UW-Milwaukee grow a football program, pay for a bunch of good players, and talk crazy shit about UW to incite the Sconnie on Sconnie hysteria we deserve.

PS - This is like the core of why the UW/Minnesota rivalry lacks true juice. By all quantifiable measures, Wisconsin > Minnesota. So even IF they ever actually win the football game, we fall back on 'well thank god we don't live in Minnesota'. But when you are battling your fellow Wisconsinites then the game means EVERYTHANG.

7. Michigan State, 2-0, (0-0). The daycare place I send my dog to has cameras that let you watch your dog throughout the day. Now, let's get past the fact that telling my mom this has completely RUINED her days because she spends every second trying to find Dany girl. Here's the real issue: 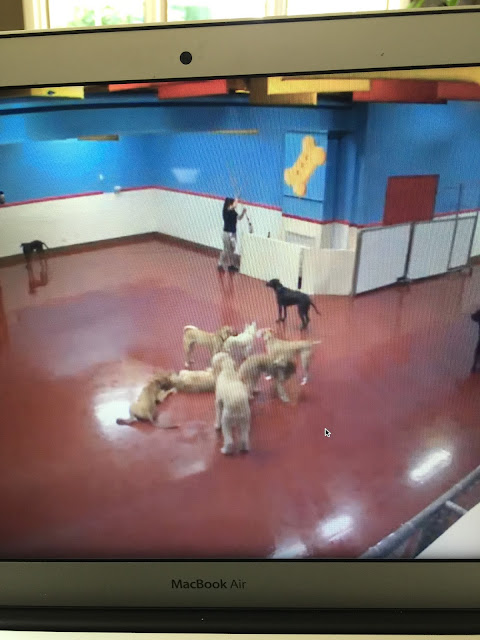 I haven't said anything yet to the daycare staff, but you damn well know I've been itching to confront them about this.

8. Minnesota, 2-0, (0-0). You know who I don't miss? Gary Andersen. This clown is making over $2 million a year despite coaching at 3 schools in 8 years and being a couple games below .500 overall. He's also 7-20 at Oregon State, including a stellar 3-15 record in the Pac-12. Straight edge square dork peg in the bubbly round hole that was Madison. Not sure what Barry was ever thinking with this one.

9. Northwestern, 1-1, (0-0). Getting absolutely throttled in the #Nerdbowl has gotta hurt. No excuses allowed when the opponent has the same rigorous academic requirements. You got out-nerded. Beat at your own nerd game.

10. Nebraska, 1-1, (0-0). I enjoyed being in Nebraska during a Huskers loss. Felt good being surrounded by that disappointment.

11. Indiana, 1-1 (0-1). Indiana/Virginia is a perfect example of a basketball game I'd love to watch and a football game you couldn't pay me to watch.

12. Purdue, 1-1 (0-0). We had health screenings at work and I learned that I am technically OBESE. WHOA. To celebrate, I had pork belly and mashed potatoes for dinner. But I had a salad for lunch 3 days ago, so you can't deny my effort.

PS - BMI is garbage and everyone knows this. Muscle weighs more than fat, but no one told the geeks making up the Fake News method of trying convince people like me to eat salmon and almonds for breakfast lunch and dinner for the rest of our lives.

A visit out west

To the land of the Mormons

I mean... it's not THAT jokey. And I say that as a staunch iPhone user/supporter.

9/11 is always an emotional thing for me. I typically end up watching a lot of the documentaries and ground footage on the anniversary every year (102 Minutes That Changed America is incredible). To witness something that terrible and then see the response both domestically and abroad is a generational happening. Seeing the Brits play the Star Spangled Banner for the first time on the Queen's orders after 9/11 really hits close to home. 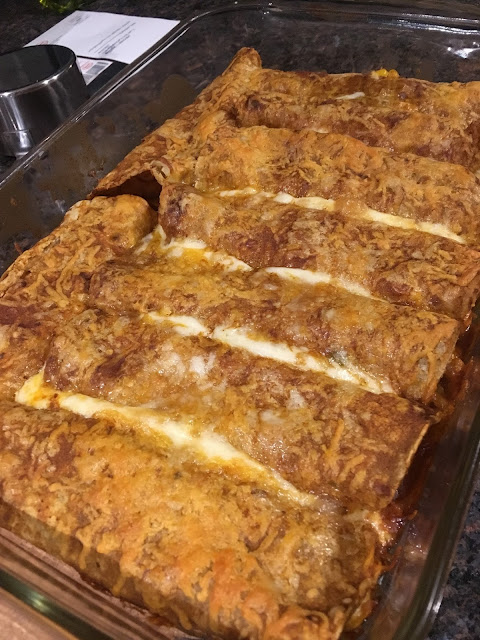 Homemade ENCHILADASSSSS. Enchiladas do not get NEARLY enough love in the gringo Mexican food hierarchy. And that means it is officially time for GRINGO MEXICAN FOOD POWER RANKINGS:

1) Burritos. Burritos are inherently unfair because you get to stuff a warm, sexy tortilla with literally ANYTHING. Oh and also you get to stuff it with as much of the anything you want. And if you make too BIG of a burrito, you can just grab another tortilla and triage it into a burrito the size of a newborn baby that came 3 weeks after its due date.

2) Tacos. Hard shell tacos suck (unless they're made out of Doritos), but soft shell tacos are basically mini, cost-efficient burritos. Not to mention that a Cheesy Gordita Crunch is essentially one big tacogasm. NOTE: I'm including fajitas in with tacos because ordering fajitas is the same goddamn thing, except you get to be the taco engineer. Chipotle sees right through this distinction by giving you the option to add grilled onions and peppers to tacos.

3) Tortas. I wish I grew up in a world where the standard sandwich wasn't turkey on cold white bread, but instead adobo marinated chicken or pork with all the fixins on a giant bolillo roll.

4) Quesadillas. Hard to argue with a scenario where meat and cheese are thickly layered between tortillas and grilled to melty perfection. Everyone loves quesadillas. Added benefit of being accompanied by dollops of sour cream and guac. More foods need to be served by the dollop.

5) Enchiladas. See above. They're like mini burrito covered in cheese and sauce.

6) Chilaquiles. The only reason chilaquiles get docked is that even the sauce-softened tortilla chips are still hard to stab with a fork. Otherwise, Mexican breakfast delight.

7) Nachos. Nachos would be so much better if a) they were consistently layered, and b) they were actually easy to eat. I look like a goddamn caveman trying to eat nachos without making a mess on my hands, face, and all over the table. What do you do when you're sharing? Everyone just sticks there hands in there and grabs? How do you adequately load up the perfect nacho? Too much stress. Better drunk.

8) Empanadas. You see, the problem here is that I want like 7 empanadas. Maybe 12. That's the equivalent of a burrito. But they always come in orders of like 2, MAYBE 3. And I feel like a gordito if I ever order more than 2 or 3 empanadas. Bad exchange rate.

9) Flautas. AKA taquitos, which are definitely delicious... but there's a reason the only time people ever really eat these are when they buy the microwavable taquitos at a grocery store.

10) Chimichangas. What is this, a deep fried burrito? That's like a slice of deep fried pizza, or a deep fried cheeseburger. WE HAVE GONE TOO DEEP.

11) Tamales. I spent the first 26 years of my life not sure if I'm supposed to eat the thing they come 'wrapped' in, which meant I literally never ordered a tamale until my late 20's. Now that I've learned to unwrap them first, I can confirm that tamales just aren't that good. Sorry, Tamale Guy in Chicago. I'd rather pump that $5 into the jukebox and subject everyone at the bar to more of my awful taste in music.

12) Tostadas. These things are IMPOSSIBLE to eat. It's like a taco, but laid out flat and inoperable with a fork and knife. If you hold it up like a pizza and just bite into you, you'll most likely end up with beef in your lap and sour cream up your nose. There is no sane reason to ever order a damn tostada.

Not Rated: rice and beans (live a little), sopes (where's the other half of the sandwich), elotes (incredible, but not really an entree), churros (bomb, but comparing churros to a burrito is the very definition of comparing manzanas a naranjas) 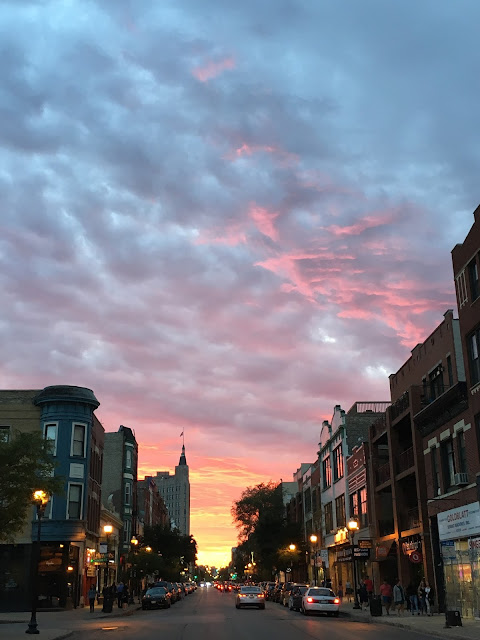 Last week it was the view from the top of the Robey. This week it's a glorious sunset while looking up at the Robey. In my year+ as a snobby Wicker Park elitist, I've quickly grown fond of the Robey (as you can surely tell by now). It's easy to see it from a distance in any direction, it has a sweet rooftop, and it flies the STARS AND STRIPES high up above for the world to see. Big fan.

Two touchdown favorites on the road against a team struggling all over the place and now replacing a quarterback. Hmmmmmmmm. THE PICK: