I need to apologize.  You all to understand that I am truly, madly, and deeply* sorry.  I hate to inform you, but I'm going to watch the Badger game tonight.  I'll be at a bar with the game on every TV, and there's simply no way I can hide in the corner checking the score on my phone.  Last 7 games:

Win at Purdue (2nd win there since the Ottoman Empire)
Win vs. Nebraska (Ugly)
Win vs. Northwestern (In your face, third-world eastern-European countries)
Win at Illinois (They beat OSU on the same court like a week before we played 'em)

But it's time to play with fire and NOT get burned.  If rules are made to be broken, then it's time to shatter my 'we only win if I don't watch' rule.  Plus, CREAN'S coming to town, and I wanna see him have a meltdown, get T'd up, tossed, and break something on his way out of the Kohl Center, all while recruiting over a kid who's busted his ass for him for 3 years.  If that happens, I might just spontaneously combust out of pure bliss.  Google is now telling me that 'combust' is not a word, which is arguably the dumbest thing Google has done since Google+.  THE NEW FACEBOOK: WATCH YOUR ASS, ZUCKERBERG.


*I really think someone should throw a party that involves a couple slow jams like this where everyone actually stops dubstepping for a second and slow dances.  I could always get on board with a good slow dance (or slow skate at Skateland).  I'm also listening to this song a little too loudly at work right now, hoping nobody notices.

PS - Other slow dance staples: I Don't Wanna Miss A Thing (bonus points for the Armageddon clips), Wonderful Tonight, Back At One, (God Must Have Spent) A Little More Time On You.

PPS - Did a little googling, came across this: 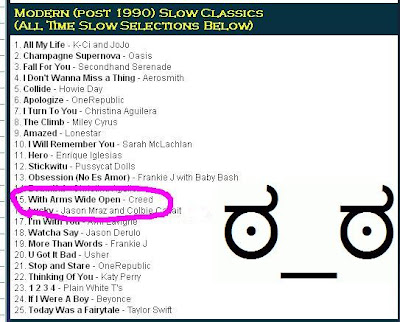 SHAMELESS PLUG: I think the ongoing love affair between THG and Robby Lange is absolutely priceless, and I implore you to check it all out (about halfway up the page, 'Weekly NFL Picks').  And RARELY do I implore people. 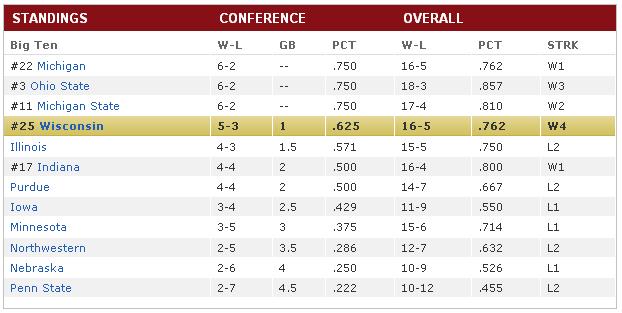 I'm having a very hard time trying to figure out what Josh's ceiling is.  It's crazy rare to see a freshman for Bo playing 28 minutes a game like Gasser did last season.  He pulled off the first triple double in UW history.  He's shooting over 50% from downtown this year.  Gasser's probably the best rebounding guard I've ever seen at the college level.  Clearly, there's a LOT to like.  Hell, he just completely shut down Brandon Paul on the road 12 days after he torched Ohio State for 43 points.

But he does some things that make you wonder if he'll never really make that leap.  Despite the experience he gained as a frosh, he's still only attempting .8 more shots per game this year.  There have been multiple times where the team has been looking for a spark on the offensive end, and you'd like to hope that Gasser can be that spark sometimes... but it just hasn't materialized yet.  To my untrained eye, his first step is deceivingly quick - and woefully underused.  Once Taylor is gone, a lot of pressure is gonna fall on Josh to make plays with the shot clock winding down.  I'd love to see him get some practice in that situation as this season goes on.


Seriously, I couldn't STAND the Talor Battle Show.  That kid would just rain contested 3's from half court on us like he was making a trick shot video in his high school gym.  FUN FACT: Battle played in front of more people in his high school gym than he did at the Bryce Jordan Center during his 4 years at Penn State.  FUN FACT #2: YOUR MOM SPELLED YOUR NAME WRONG.

That's awesome.  But if you dig a little deeper into his stats, you'll understand why Penn State isn't all that great despite having a guy playing this 'well'.  To the pont: 41% from the field, 28% from 3.  Given how much he shoots (15 times a game), it's not a surprise that Frazier puts up 18 PPG.  But a lack of efficiency is a killer in hoops, and until Frazier can either start taking smarter shots (unlikely, at least this season) or hitting the tough shots, Penn State will continue to occupy the basement of the Big Ten.  And yet, this is a team that's won at Purdue and at home vs. Illinois.  Go figure.

Kanye West - All Of The Lights (INTERLUDE)

I really wish the interlude itself were a full 4 minute song.  I very randomly dig on orchestral stuff, and anything with a piano is fantastic in my book.  I really should write that book.

Am I throwin' you off?

If I had to approximate how many games of beer pong I played with this song rocking in the background, I'd set the over/under at 784.  And that over looks DELICIOUS.

PS - Any song that mentions Steve Nash is pure class.

My Chemical Romance - Welcome To The Black Parade

This is kinda awk...

So many things to say about this video:

1. I highly, highly doubt this was an actual nutshot.  I only say that because if you did fall with that much force on your junk, you wouldn't laugh.  You wouldn't get up.  You probably wouldn't be breathing.  I'm pretty sure you would just die on the spot.  It doesn't require a whole lot of force to inflict a world of pain down there.
2. Anyone who attempts something like this should probably think long and hard before reproducing.
3. There isn't a more fun place to run around like a maniac than a gymnastics fortress.  EVERYTHING is bouncy, you're not wearing shoes... the possibilities are ENDLESS.  There's a 75% chance that my next birthday party will just involve a case of liquor, a football, a volleyball, and a rented gymanstics* warehouse.  I have no doubt that this would be the best birthday party in the history of birthday parties.  Also, someone might die.
4. If I were rich (ONE OF THESE DAYS), I'd own a house where every square inch of floor is just the floor/spring combo from the floor exercise.  That's the shit right there.
5. 9 times out of 10, the best cure for boredom is one of those giant bouncy balls.


I could watch these Iraqi soldiers attempt jumping jacks for HOURS.  It's like a scene out of Hot Shots! Part Deux or something.  Also:

That is an IRONCLAD theory.  I'm mad at myself for not coming up with it first because it is possibly the most logical thing I've ever read on the internet.

I'm not sure, but did Obama just made the worst joke ever?  I think this reaction shot sums it up quite succinctly: 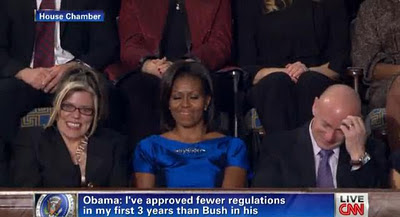 Sticking with the SOTU, Katz was all over this.  Somehow, I never saw this clip of a woman LOVING herself during last year's address. 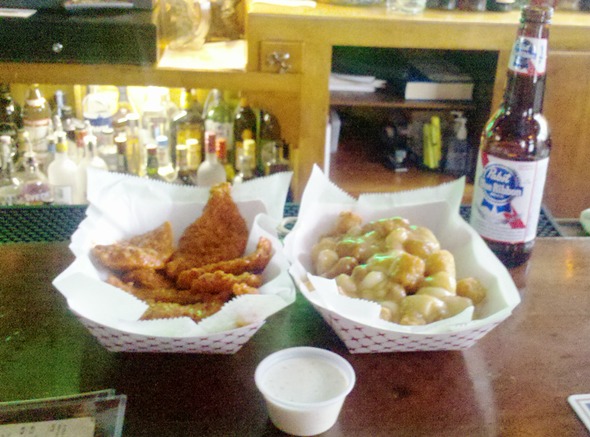 Buffalo chicken tenders and poutine tater tots from Will's, courtesy of Ryan G.  I feel like only Canadians could get away with inventing poutine.  Obviously slathering stuff with gravy and cheese is a very American sounding dish.  But calling it POUTINE?  Our minds are far too filthy to pull that one off.  Well played, you really nice and anti-confrontational Candians.

ANALOGY TIME: If chicken tenders are a hot car right off the lot, then buffalo tenders are that same car with rims, a tint, subs and a drop.  Ranch would be the TV's in the backs of the headrests.  Speaking of headrests, few things are more fun than messing with someone sitting up front by constantly raising/lowering/removing those things.  They make perfect weapons once removed. 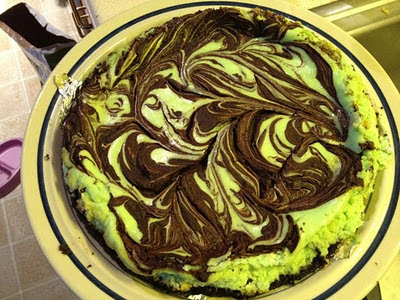 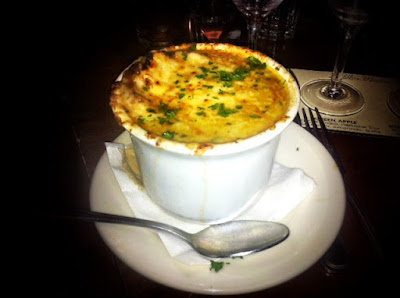 French onion soup from Wildfire.  Is there anything better than a good bowl of french onion?  I honestly don't believe so.  Because you know what I love like a child?  MELTED CHEESE. 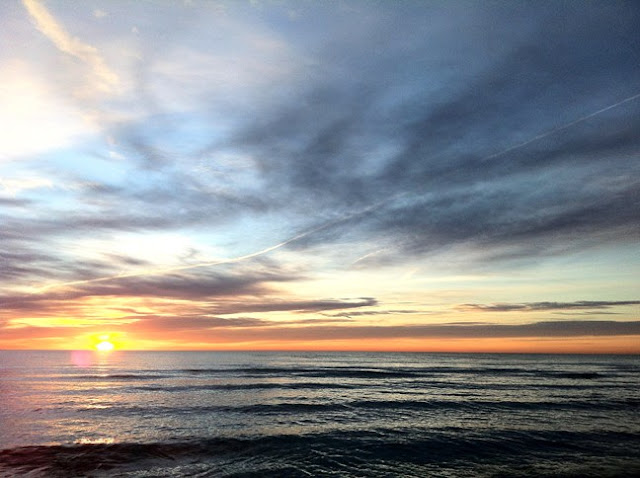 Sunrise over Lake Michigan in Milwaukee, courtesy of Flood.  She didn't specify if it was sunrise or sunset, but I did some googling and determined that it was probably sunrise because you're facing East when looking out towards Lake Michigan.  I have no idea how people figured stuff out before the internet.


TALES FROM THE CTA

I witnessed a real BOLD move today on L.  Back story: I never sit on the L.  It's a combination of a few factors: I sit all day at work, I yield to the elderly/women/brave children, homeless people poop on the seats, etc.  So since I never sit, I very easily justify taking the standing spot against the 'wall' by the door.  Even if I have to let people past me after I get on, I'm still holding down that spot.  That's MY spot.  But today, things got weird.  Instead of rambling through some terrible explanation, I'll do what I think I do best and draw a picture: 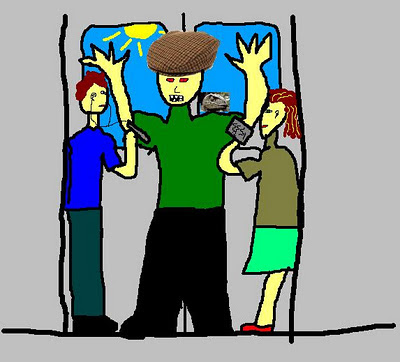 You see what I'm talking about?  This guy was a MONSTER.  Although, I'm not sure this does it justice.  Maybe we should look at it from another angle*: 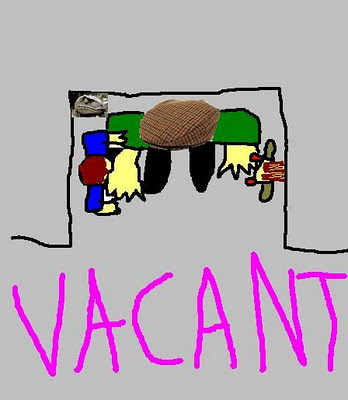 I hope you're finally starting to understand the wrongness in doing what Old Man Rivers here did.  The ONLY time it is acceptable to stand there is during rush hour when the train is crazy packed.  In a 'we're piled in here like crab on Deadliest Catch' situation, that spot is totally fair game.  But at 8 am on a half-empty train?  STOP IT.

PS - The key to any fine piece of artwork is most definitely the sketch: 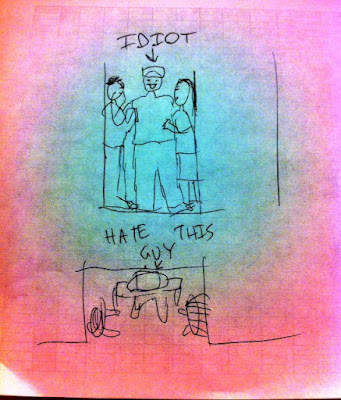 Some day that will be worth MILLIONS.


*True story: In 7th grade we did a project on Angel Island that included making a 'book' about what we learned.  The only problem was that I wrote 'Angle Island' on the cover of my book.  Ever since that haunting moment, I've quadruple checked to make sure I've got the right word when talking about angles or angels.  Is that strange?  I don't know why, but I'll NEVER forget that mistake.  If only something similar could happen so I could remember how to spell 'explanation' and 'devastating' correctly each time.  F those words AND their vowels. 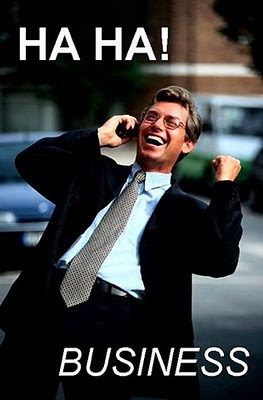 Amazing.  I can GUARANTEE that this hangs very prominently on a wall at McGraw-Hill headquarters. 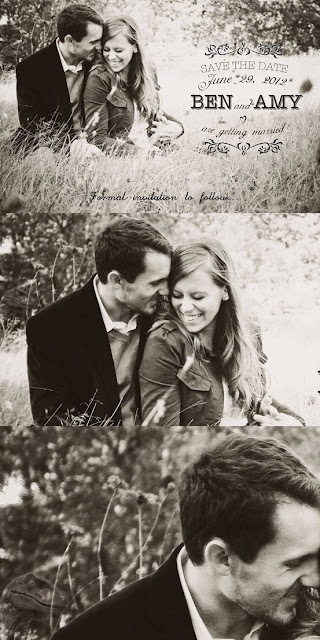 Nope.  I can definitely never get married now.  Knowing that Ben and Amy are out there laughing it up at beating me to the raptor punch would absolutely DEVASTATE* me.  Although if we're just being real (a little real talk, if you will), there's no way this couple makes it more than 6 months.  If you're dumb enough to go in the long grass, you really have no chance in life.


*Can't make this stuff up:

Up until this very moment, I had completely forgotten that this game ever actually happened: 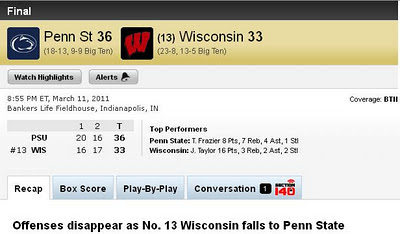 That was a 2 hour window of my life where I seriously questioned everything I believed in.  PUKE.

But that was then, and this is now.  Even with a few nice wins, Penn State is still garbage.  I'm not saying this will be an easy win, because no B1G road game is EVER easy.  But it's a game we should, and in my opinion, will win.  The Pick:

ON WISCONSIN
Posted by Schwa at 6:23 PM