January 8th was a dark day.  Less than a week after getting home from a brutal Rose Bowl defeat, we had to go out and get smokeshowed by Michigan in hoops.  Losing to Michigan is NEVER enjoyable, and on the heels of a Rose Bowl loss and overtime heartbreaker to Izzo?  Just absolutely devastating (spelled it right on the 3rd try!).  There we sat, 1-3 in Big Ten play, seriously questioning whether or not we could make the tournament.  Rock Bottom.

Fast forward to today: UW is riding hot on a 6 game winning streak, and, miraculously, is a win on Saturday away from being in FIRST FREAKING PLACE in the Big Ten.  I still have no idea how this is possible.  What I DO know, however, is that I'm loving every second of it.  I can watch games again.  Jordan Taylor is reasserting himself as an All-American.  College basketball is FUN once again.  All is well in the world.

But that brings us to Saturday.  Stop me if you've heard this one before: A highly-ranked OSU team is coming to Madison with serious title implications.  This has almost become a yearly occurrence.  LET'S REVIEW:

1/9/07: #4 Wisconsin 72, #5 OSU 69.  KEY PLAY: After demonstrating the taped up wrist of Greg Oden on her own wrist, Erin Andrews throws the tape into the crowd.  I caught it and cherished it for years.  Also, I think Oden had more fouls than points.

2/24/08: #10 Wisconsin 58, OSU 53.  KEY PLAY: The teams didn't meet in Madison this year, but I just wanted to bring this game up so I could talk about how GOOD that Wisconsin team was.  Big Ten Regular Season and Tournament Champions, 31 wins... and it all unraveled before my eyes against Davidson in Detroit.  It just had to be in Detroit.

2/14/09: Wisconsin 55, OSU 50.  KEY PLAY: College Gameday came to Madtown for a V-Day clash between... a couple of decent-to-good Big Ten teams?  UW squeezed by FSU before bowing out against Xavier.  OSU lost a thriller in double OT to Siena.  Not the best year for either school.

By my count, we've won like 46 straight home games against OSU.  I will conveniently ignore the losses in Columbus (including a brutal one point game in '07 and the utter destruction last year where they hit 107% of their three point attempts) because this game is being played at home sweet home.  Like I said, CONVENIENT.


*Everything about this paragraph:

Wisconsin (19-5, 9-3 Big Ten) topped a No. 1 opponent for the first time since 1962, when it was also Ohio State. The Badgers joined Florida as the only programs to knock off the same No. 1 school in both football and men's basketball in the same academic year. The Gators also beat Ohio State in both sports in 2006-07.

SHAMELESS PLUG: I actually don't have anything to plug this week.  That's probably a good thing. 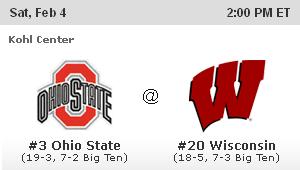 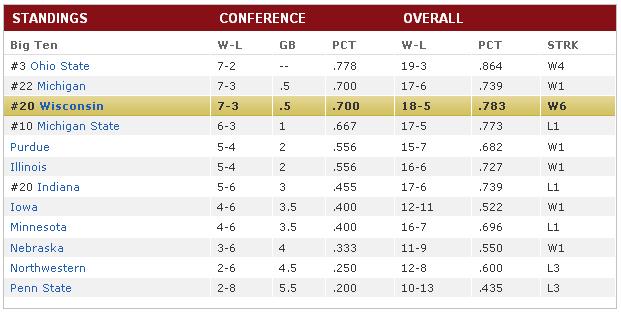 Yes.  I do feel kinda stupid naming the two best players on the court as my players to watch.  But I have my reasons.  Hear me out.

As you saw in the highlights I linked above, the ONLY reason we won that game last year was because Jordan Taylor said we could.  The crowd was absolutely dead and defeated before he decided to start draining 3's in Craft's rosy face.  That was All-American Taylor.  That was the Taylor I would get a FatHead of and hang above my bed.  But that Taylor has been MIA this season.  He hasn't been shooting well at all, and in general just seems a little 'out of it'.  Fortunately for Badger fans everywhere, it seems as if somebody has woken the (dragon) monster inside him.  True, he's still not scoring at the same clip, but you can tell he's feeling it when he starts hitting enormous shots like the late 3 pointer against Penn State to put the game out of reach.  That's the kind of shot he hit with regularity last year, but has struggled to find this time around.  It would be in everyone's best interests if he can keep hitting that shot.

I don't even know where to begin with Jared Sullinger.  Therefore, I will make a LIST:

Big game means big music.  Not like big band, that'd be weird.  But songs that get me ready to go to WAR.  Not like real war, that's obviously a billion times more serious and important.  Maybe I should just list the songs already.

Nelly - Heart Of A Champion

You had me at 'NBA on NBC' sampling.

My work habit ain't no habit man, I do it on purpose
I push myself to the limit so my talent'll surface
So now it's, curtains and drapes, on anybody who hates
Dislikin what I'm recitin, bitin what I've been writin

I think I'm adopting this as my new life motto.  Nelly is an absolute WORDSMITH.

Because nothing gets the blood flowing like an unnecessary amount of swearing.

If you're not ready to conquer the world after listening to this song, there might be something seriously wrong with you.


House of Pain - Jump Around

Holy shit.  My mind litrally just exploded.  How did I never notice this?  Why did no one ever tell me?  Is this a conspiracy?

You don't win in Madison

Not now, not ever.

I've never wanted to be a crab so badly in my entire LIFE.  'Oh, you messed up my claw?  Whatever, I'ma just rip it off.'  I'm assuming they're like lizard tails, and just grow back.  That is so cool.  It's like Hayden Pannattierrerritierr's ability in Heroes, which I still recommend for at least the first season, and most of the second season.  Then they just started making stuff up, but weren't nearly as good at it as the LOST guys were.  It took me 3 tries there to get the correct combination of no caps and no italics after typing LOST.


SHEEP CYCLONE.  I'd be crying in my car.


I don't get how anyone can like cats more than dogs.  Have you ever seen a cat do anything remotely as cool as this?  Allow me to answer that for you: NO.  You haven't.  Because cats just poop in sandboxes and run away for days, only coming back when they need to poop in the sandbox again.  I have 3 rules in life:
I never watched 'How To Make It In America', but I assume it was cancelled because they didn't spend enough time focusing on these 3 vital rules. 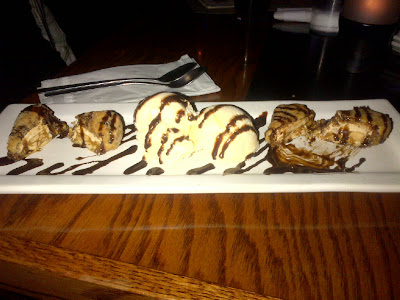 Ryan G. sends in 'deep fried snickers a la mode from Rocks in Lincoln Park'.  To which I say, holy fuck.  This is real? 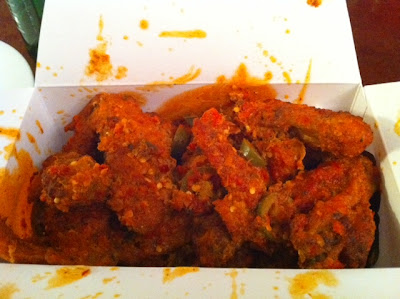 From my personal stash (and I hope I haven't used it before, but it's hard to keep track these days), suicide wings from Crisp in Lakeview.  Crisp is actually a pretty amazing place - Korean fried chicken.  The menu is also very deceiving: You can order 5 or 10 wings.  How dare you insult me!  I can eat 100 wings.  So, naturally, I went with the 10 piece.  Good lord.  These wings are MASSIVE.  I think I started sobbing when I realized the mistake I had made.  What fucking chicken has wings this big? 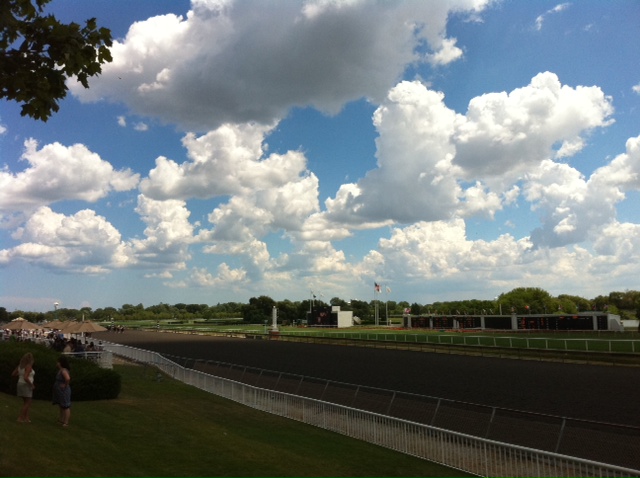 Something about the sprawled out greenness of the Arlington Race Track and the awesome summer sky above gets me every time.  A really cool place to spend an afternoon. 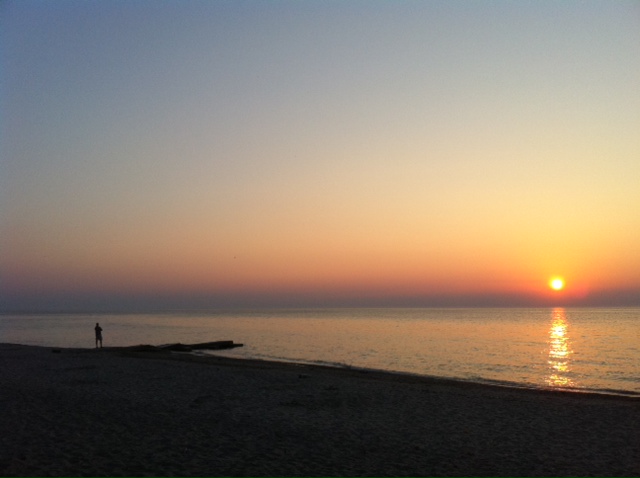 My turn for a Lake Michigan sunrise.  I walked home from a friend's house 4th of July weekend and decided to take a little detour once I realized I might be able to catch the sunrise.  This was just after I got my new iPhone, so I was OBSESSED with taking pictures at the time (nothing has changed a year and a half later).  I felt a lot better about myself when I noticed that I wasn't the only weirdo at the beach taking pictures.  I WAS the only drunk one though.

I don't care how ugly the Penn State game was, we still won on the road in the Big Ten.  That is NEVER easy.  Just ask our upcoming opponent what they think about winning in places like Champaign.  The bottom line is that we're playing defense at an absolutely ELITE level, so if we can just get some shots to drop, we'll be really tough to beat.  I expect a raucous atmosphere at the Kohl Center for a Saturday game against a top 5 team, and here's to hoping the team feeds off that energy.  Limit the open looks, don't turn it over, knock down the shots, and head to the KK to celebrate.  Or don't, because it's still a dungeon.  #BeatOSU.  The Pick:


ON WISCONSIN
Posted by Schwa at 5:57 PM