Thanks for the questions. Let's get on with it.


How "dead" is Jon Snow? Is Jamie Lannister eventually going to kill his sister Cersei? Is Tyrion Lannister really a Targaryen? Why is it taking George R.R. Martin so long to finish writing a measly 1500 pages? What is with people having 2 middle names?

I want to make a rule that EVERY mailbag is required to have at least one Game of Thrones question. With that said, if you are behind on the show then HELLO SPOILER CITY and stop what you're doing go finish it.

Ugh, so many sleeps until GoT is back. DAMNIT


White or red pants on the road?

I'm a fan of the all whites on the road. But now that it's looking like Under Armor will replace Adidas, I'm hoping to see some change. Our uniforms are BORING. In all sports. It sucks because the Motion W is bad to da bone. Bucky is a kickass mascot. And Cardinal is a great color. Now is the time for us to mix it up and drop some hot unis on the world.

I liked the start in recent years with all the new helmets. I'm also totally okay with them using some black in the uniforms. Black isn't any team's color - black is ALL of our colors.

At the end of the day, recruits dig this shit. And I don't really care that much. So if messing with the uniforms results in one good recruit picking UW over OSU and MSU, then it was totally worth it.


I'd like to see a ranking of best Badger bars at some point - maybe something CHI specific?

Honorable Mention: Deuce's. Nobody goes to Deuce's to watch Badger games. That's nuts. People go to Deuce's to stab/get stabbed. However, I will say their little grotto is a surprising retreat in the middle of Wrigleyville.

5) Prost. Never been to Prost for a Badger game, but any place that serves enormous beers and has cheese curds and various kinda of brats can't be that bad.

4) Lottie's. Been a couple times for young alum trolley crawls and had a decent time. My friend also won the raffle for a glass boot TWICE at Lottie's, so I enjoyed that.

3) FatPour. Sweet bar with beer for days. Only problem as I see it is that no one ever wants to go out there for a game.

2) Red Mond's. PURELY for nostalgia. The day we all realized they didn't have AC marked the end of our days at Mond's. The memories are fond, but memories don't pay the bills.


How bat shit crazy will Alabama fans be after they lose to Wisconsin?

Oh, if Wisconsin fans can take Uber Cruise Ships up a river of Bama tears all the way back to Wisconsin then it will be the greatest thing ever. I know we all love UW, but these hicks LIVE for Bama football. They don't have the Packers to fall back on or Bo Ryan to help guide them in life. For them, Bama football is the only reason to get out of bed in the morning.

And for that, we MUST beat them. There is no doubt in my mind. I don't even care what happens after that game as long as we win. We should've beaten LSU last year, we beat Auburn in the bowl game, and now we must conquer the Tide. I just realized how excited I am for this game.


How much is it going to suck when Wisconsin finally loses to Minnesota?

So much. So, so much. They're going to be SO annoying about it. After over a decade of dominance, they'll gloat about that win until they lose their voices, and then they'll hire planes to fly banners over Wisconsin with the final score. It doesn't matter that we've won 11 straight against them - 'you're only as good as your last game' is what you'll hear back.

You know what else I just discovered? Wisconsin has NEVER led the head-to-head series against Minnesota. It's been tied twice (5-5 and 6-6), but UW has never had the overall series lead. Last year's game brought the head-to-head to 59-57-8. THREE more wins for Wisconsin to take over the lead. We're so close!

But we're never losing to those clowns ever again, so there's nothing really to worry about here.

@brandonrifkin How much tailgating is too much tailgating for the game? I'm not tryna be shown up by Bama fans in JerryWorld's parking lot.
— Rich Hammie Quan (@drewhamm5) August 14, 2015


I feel like we've played this game before. Drinking before a big game is truly a delicate process. How do you straddle the line of properly lit up and blacked out? Lord knows you traveled all the way there, paid good money for a ticket, and have a slight desire to remember the evening. But like you said, UW fans have a reputation to live up to. CONUNDRUM.

Do as I say: get nice and toasted but maybe leave the Jamo at home. Stick to beer, work their faces in flip cup, demonstrate how an octobong works.

Do as I usually do: don't turn down a drink no matter what and record the game on your DVR so you can fill in the blanks when you get back to Chicago.


How do I get Guiness stout stains out of a white carpet?

I think you BLOT it. I learned about the blotting trick at a wedding a few years ago after I got some au jus on my shirt. A girl at my table just dunked a napkin in water and started blotting it and BAM a few minutes later it was like it never happened. Ever since, whenever something gets stained I just blot the hell out of it for a few minutes. It works, like, 60% of the time. It's my new favorite domestic thing.

Also, there's that scene in American Gangster where Denzel screams at his servant to blot that alpaca carpet with blood on it:


Why isn't poutine a bigger deal in Wisconsin?

This is the most reasonable question I've ever received. I don't even have a plausible explanation. Wisconsin is the land of cheese curds and over indulgence and savory living. Why wouldn't a dish that is equal parts french fries/cheese curds/gravy take off? Who WOULDN'T want that in Wisconsin? I'd like to take the Canadian version and tweak it to use fried cheese curds. That's an appetizer NO one passes on. Wisconsin Poutine, coming in hot.


If you could lick ranch dressing off any celebrity's naked body, whose would it be?


Yes I would lick Trader Joe's Organic Sriracha Ranch Dressing off Taylor Swift's naked body and in no way shape or form should any part of that sentence shock you. Like George wanted to ensconce himself in velvet, I'd love to ensconce #Swiftness in Trader Joe's Organic Sriracha Ranch Dressing and dip Wisconsin Poutine... on her? In her? Goddamnit this got weird in a hurry.

PS - If you haven't noticed by now, the Sriracha Ranch from TJ's is fire. Go. Dip. Enjoy.

PPS - Yeah, Bad Blood is definitely the worst good song she has. That song spends like 5 minutes trying to get good before it takes off a the very end. If it wasn't hyped relentlessly for the video then I doubt anyone would care that much about it. Shake It Off, Blank Space, and Style are all objectively better songs. But the girl is untouchable and literally do whatever she wants with whomever she wants.

PPPS - Never felt a tiny bit of confidence in the who/whom debate. This is basically the voices in my head every time:

"Not a native speaker" after Oscar chimes in gets me 11 times out of 10.

Can't say I'm one bit disappointed by the quantity of #Swiftness questions here. I don't even fully understand what this question means, so I'll just use it as an excuse to talk about my #SunshineStave excitement.

If I was all aboard the Stave bandwagon last year, what does that make me this year? Commander and CEO of Stave Enterprises? The kid is gonna shut up all of the critics once and for all. Not only did he kinda start finding his groove last year after the shenanigans of the Andersen/Ludwig clownshow, but QB guru Chryst The Savior is back in charge on the sidelines. Add in an improved receiving group with a downgraded running game and you get the recipe for mucho Stave. I, for one, am very excited to see how he handles it.


Are you as pissed at Barry as I am for scheduling 3 of these SEC openers in a row? I think he totally jumped the gun on the whole playoff scheduling thing and went overboard. I rather be opening against UAB.

The only thing I'm pissed about is these games happening in neutral stadiums. It should've been UW at Death Valley last year, Bama at Camp Randall this year, LSU at Camp Randall next year, and UW at Bryant-Denny the year after. How freaking AWESOME would those games be? I'd without question go to both games in Madison and the game in the Bayou. But nooooo, we have to play in Houston and Dallas.

Yeah, the game at Lambeau is pretty cool, but these are college games. They are not rivalry games or bowl games. They should not be at neutral fields. Ugh.


Pop Quiz Hotshot. Cubs playoff game is at the same time as a Badger game. What do you do. I repeat what do you do.

Well we haven't had this issue since '03, and it was the motherlode that night: UW/OSU (AKA the Schabert-to-Evans bomb) and game 4 of the NLCS. I was multitasking back then, but I was also in high school. Slightly different situation. If it happens this year? I'll go somewhere I can watch the Cubs. It's that simple. Cubs playoff games trump regular season Badger games every single time. And it works out nicely that the UW football schedule in the back half of October is miserable: Purdue/@Illinois/Rutgers. Woof. I might stay home and watch a replay of the UW/Kentucky Final Four game instead of watching those football games.

Oh! I know THREE of them! LET'S COLONEL RANK:

Honorable Mention: Colonel Klink. A character from a TV show that went off the air 14 years before I was born? PASS

5) Colonel Mustard. Clue sucks and mustard is repulsive. I don't care if he was in the library with a wrench or the conservatory with a rope, he still sucks. Unless he used the horseshoe. Horseshoe is an ELITE murder weapon.


Somehow I've never seen that before, maybe because I stopped watching SNL 15 years ago. But that's good stuff. I am on board.

3) Colonel Custer. Pretty big badass. I also like how many people are trying to take credit for his death:

Several individuals claimed personal responsibility for the killing, including White Bull of the Miniconjous, Rain-in-the-Face, Flat Lip and Brave Bear.


RAIN-IN-THE-FACE. Hot damn that's as good as Native American names get. Not a shred of doubt in my bones that Rain-in-the-Face ended Custer. Can't even get mad when you get got by Rain-in-the-Face.

PS - Really thought I was onto something when I thought of making a custard place named Custard's Last Stand. It appears I was NOT the first person to think of this: 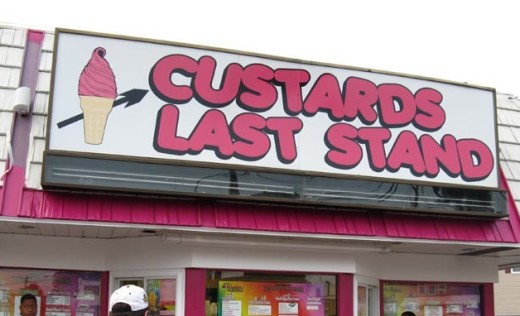 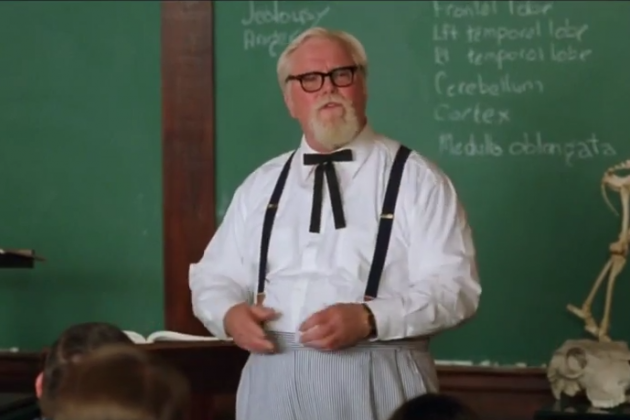 Although I do wonder what he would've thought about KFC 2.0 AKA the Bowl. LOVE the bowl. Newage KFC is delightful.


IDEA: I wanna go as Popcorn Guy for Halloween. The sloppy drunk part will be easy!

PS - I have a sneaking suspicion that this question only existed to mindbang me with the word 'colonel'. That is hands down one of the worst words in the world. How on EARTH does ker-nel get spelled colonel? So frustrating.


Season Preview next week. And then it's time for Bama. Let's do this thing.

ON WISCONSIN
Posted by Schwa at 5:49 PM