I've unscientifically deduced that August is the fastest month in the world. It's already August 27th? How is that possible? Even Father Sky and Mother Earth are confused and are tossing us sexy fall weather this week. And that weather is the most pleasant reminder around that Wisconsin and Alabama will be playing a football game right soon. GLORY.

You really couldn't ask for a better game to start the Paul Chryst era (other than this game being in a real college stadium in front of real college fans). And it's an era I'm oddly optimistic on. Was he a sexy hire? Nah. Is he going to KILLCRUSH the recruiting scene? Probably not. But he's going to lead juggernaut offenses. reestablish the relationships with the Wisconsin high school coaches that GA damaged, and let Aranda run a dirty defense. That's a recipe that can cook up some playoff appearances in the future.

Cautious optimism. Feel it in your bones.


STILL LOOKING FOR REFERRALS: Hit me back with email addresses and I'll add your friends/sisters/cousins/fraternity bros/grandparents to the list. Gracias. 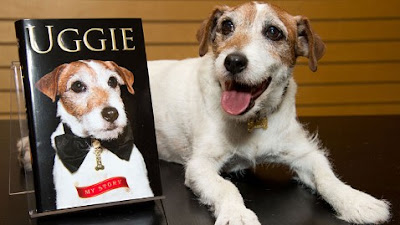 Here's Uggie with his memoir. Uggie has a memoir. I am less accomplished than I ever nightmared about. 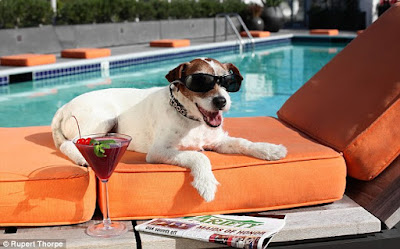 Uggie is the fucking DOG. 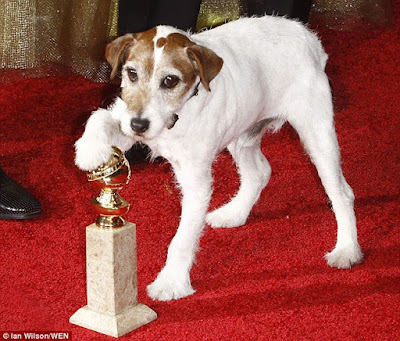 Uggie on the red carpet at the Golden Globes.

I guess Uggie was amazing in some movie called The Artist, which led to this:

S.T. VanAirsdale, an editor at Movieline, began a campaign called "Consider Uggie" on Facebook to seek recognition for Uggie's performance; he felt that the dog outperformed Leonardo DiCaprio's performance in J. Edgar, but probably wasn't as good as George Clooney in The Descendants.

I like that nice grounded approach. Not saying he was George Clooney good, but he was definitely better than Leo. Callin' it like VanAirsdale sees it. However, it was not meant to be:


The British Academy of Film and Television Arts responded: "Regretfully, we must advise that as he is not a human being and as his unique motivation as an actor was sausages, Uggie is not qualified to compete for the BAFTA in this category.

SPECISTS. Since when is being motivated by sausages a bad thing? I'm motivated by food at least 80% of the time I do something. I waited multiple hours for sausages at Hot Doug's. Does that mean I'm ineligible for a BAFTA award? How was PETA not all over this? Where are you when we need you, PETA?


PS - Big ups to bowwowtimes.com for the images.

PPS - Hey bowwowtimes.com, BuzzFeed called and they said they dig your style:

PPPS - Nation Dog Day, this shit has got to stop. There is a National EVERYTHING Day. You know how some Hallmark tycoon invented holidays just to sell cards? Idiot clickbait no-brain websites like BuzzFeed are 1,000% behind every one of these National Appreciate Your TV Stand Days. The madness must stop. 47 Reasons To Call Your Best Friend Even Though It's National Don't Call Your Best Friend Day. THIS IS WHERE WE ARE HEADING. I do not like internet 4.0. BAD INTERNET

T.J. Edwards, ILB, Redshirt Freshman. With minutes galore available at inside linebacker, look for the redshirt freshman from some town I've never heard of in Illinois to take over. He'll be starting from week 1 and I expect he'll hold on to that spot for a long, long time. Edwards has been banged up in camp, but he's back out there and will be ready for Bama. I love that we keep pumping out productive linebackers. Aranda does magic.

Micah Kapoi, OL, Redshirt Freshman. A giant offensive lineman named Kapoi from Kapolei, Hawaii who is poised to start on the Wisconsin offensive line? What's not to like? Sounds like Kapoi is gonna slot in at right guard, and if he holds down that spot all year, you're probably looking at your starting right guard for the next 4 years. Hopefully he turns into a monster.


DG is too lazy to write up a sentence about the song he picks each week. Berate him for his laziness.


The Aussie's in Tame Impala put out a 80's synth album and its great. Three Side Notes: 1) Their first album is a masterpiece in Psychedelic Rock. 2) Lead singer Kevin Parker sounds just like John Lennon 3) I never would have predicted this band would blow up after that first album. If you've only heard their two singles from their second album check everything out. (JQW)

Big time jam. Been rocking to this song all summer, and I liked it BEFORE it was bastardized in a Bud Light commercial. That makes me cool!

PS - Just kinda now realizing that it's Bud Light... and Miller Lite. Do you think the reasoning for going with 'Lite' instead of 'Light' was that people would see fewer letters and thing 'oh it must be even LESS filling and have even FEWER calories than the competitor's brand!'? That's absolutely what the marketing guru at whatever firm Miller hired came up with. Does that work? Does my weak brain fall for that shit?

Joel Stave, QB, Redshirt Senior. THE CLOUDS WILL PART. THE SUN WILL SHINE. It's going to be a MISERABLE year to be a Stave hater. If you're one of the clowns out there that thinks Gillins or Houston should be starting, just walk into an ocean and keep going. Stave is 21-7 as a starter, and that includes a brief period of mindboning by the GA braintrust. With a more seasoned group of receivers and Chryst coaching him up, I fully expect Stave to put up his best statistical season. By far.

You just sit back and enjoy the Sunshine Show. #AllIn #Sunshine

Lotta work to do this year

Opponent: #3 Alabama (in Houston)
Date: 9/5
This is the game most likely to... be fun and exciting. Have you seen our schedule?
We will win if... our O-Line can create room for Clement while keeping Stave in one piece and Gaglianone hits 47 field goals with assorted hip gyrations after each one.
What's for sure actually going to happen: We will ruin the entire state of Alabama's YEAR by beating them. B1G B1G B1G B1G B1G

Opponent: MIAMI-OHIO
Date: 9/12
This is the game most likely to... send people to blackout city.
We will win if... there isn't a Tommy Boy Columbus, Georgia/Columbus, Ohio mix up and Miami Florida shows up instead.
What's for sure actually going to happen: Stave will throw 15 touchdowns and I will simply tweet 'HEISMAN' after 4 minutes of trying to type it without spelling mistakes because Will's.

Opponent: TROY
Date: 9/19
This is the game most likely to... remind us to cherish not being the Troy Trojans. That is awful naming.
We will win if... there isn't a Tommy Boy Columbus, Georgia/Columbus, Ohio mix up and the USC Trojans show up instead.
What's for sure actually going to happen: Stave will throw a touchdown left-handed to himself and do a 3 Ninjas-style gymnastics floor routine into the endzone.

Opponent: HAWAII
Date: 9/26
This is the game most likely to... have crowded rooms in the Dane Country Jail NIGHT GAME NIGHT GAME NIGHT GAME
We will win if... Hawaii doesn't have another one of those swindle offenses that runs trickerations with side-armed quarterbacks and fringe NFL receivers.
What's for sure actually going to happen: Night game blowout party hope you didn't pass out before kickoff.

Opponent: IOWA
Date: 10/3
This is the game most likely to... feature annoying stats about how close our all-time head-to-head record is.
We will win if... we remember that both schools are kinda trying to play the same game... but we're just better at it in all facets.
What's for sure actually going to happen: On the road I'd have some concern, but we're not losing to a Kirk Ferentz team at home ever again.

Opponent: at Nebraska
Date: 10/10
This is the game most likely to... propel us toward a divisional championship.
We will win if... Danny O'Brien does not take a snap.
What's for sure actually going to happen: Clement goes bananas. I just feel it in my bones that cool things happen when we play Nebraska. Circle this one and come back to it, book it.

Opponent: PURDUE
Date: 10/17
This is the game most likely to... set an all-time Badger Preview record for most 'LOL's used to describe the opposing team.
We will win if... no but seriously.
What's for sure actually going to happen: LOL PURDUE LOL LARRY

Opponent: at Illinois
Date: 10/24
This is the game most likely to... jesus this conference has some crappy football teams.
We will win if... we decide we can't just hang out in Chicago instead of actually going to Champaign and playing the game.
What's for sure actually going to happen: Boy we're really gonna pad the stats with this Purdue/Illinois/Rutgers stretch of the schedule.

Opponent: RUTGERS
Date: 10/31
This is the game most likely to... remind us that adding Rutgers just to get some elusive New York media market was the dumbest thing the B1G has done in a long time.
We will win if... man this section is gonna be a lot different once we start playing MSU/OSU/PSU/Mich.
What's for sure actually going to happen: Rutgers will probably have a new coach and I'm not sure he'll be able to inspire the boys to an upset.

Opponent: at Maryland
Date: 11/7
This is the game most likely to... wonder how the season has flown by so quickly. It's already November?
We will win if... Stave is still healthy.
What's for sure actually going to happen: 1-0.

Opponent: NORTHWESTERN
Date: 11/21
This is the game most likely to... make us praise the gods for this being a home game.
We will win if... Camp Randall does not undergo emergency renovations requiring this game to be played in Evanston.
What's for sure actually going to happen: SUCK IT NERDS

Opponent: at Minnesota
Date: 11/28
This is the game most likely to... make me take screenshots of Minnesota players saying how THEY GON' TAKE THAT AXE in the week leading up to the game.
We will win if... we remember who we are and who they are.
What's for sure actually going to happen: 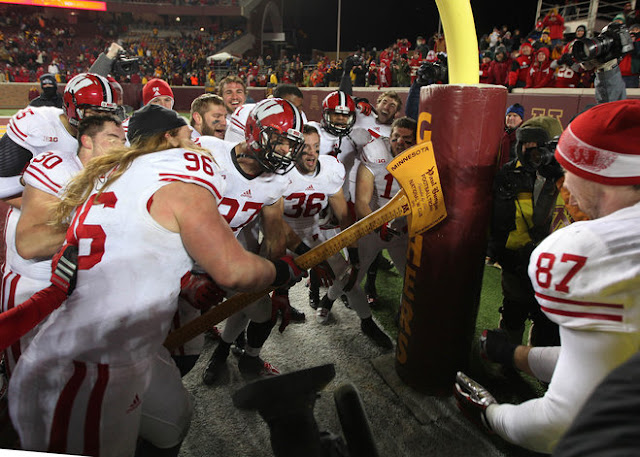 I really love when I find a video I know is completely stupid, but it still gets me good. This one would qualify. And you need the sound to truly appreciate why this is so damn hilarious.

I know it's probably fake because we can't have nice things on the internet, but I still enjoy it. And when she steals the clap part from the Friends theme song? 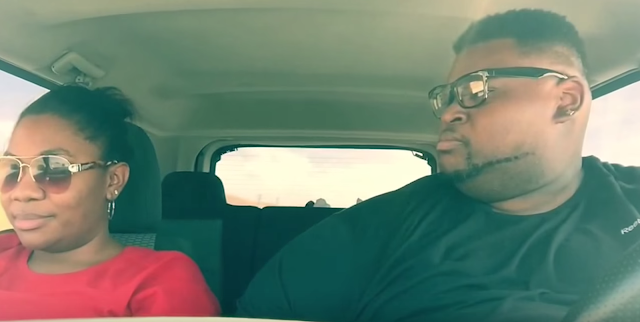 So perfect. That wry little smile. The look of disgust from the brother. I'm gonna go on pretending it's real.

There's a real fine line between training a dog and training a child. But both are adorable so who cares.


Had this in Vegas and it was every bit as insane as it sounds. The best part was by FAR the pretzel roll french toast. I could eat a loaf of that without blinking. So incredibly delicious. CARB PARTY

Like I said, the feeling in my bones is cautiously optimistic. The schedule is set up for a nice run, and the Bama game really won't wreck the season if we can't pull it off. It's a familiar system on offense and a now established system on defense, with solid personnel all around. I'm expecting an absolutely nasty defense with an above average offense, and in this league, in this division, that's 10 wins.

10-2, West Division Champs, and a date with MSU in the B1G Championship. That sounds right.

ON WISCONSIN
Posted by Schwa at 5:19 PM