Did you enjoy your summer? Sweating every day? Getting sunburn just checking the mail? Not being able to wear anything from your arsenal of Patagonias? SUMMER SUCKS. There you go. I'll say it. It is, on a good day, the third best season:

1) Fall. Comfortable weather, football returns, Cubs on a 1 World Series winning streak, Halloween, quarter zips (the new thermals), I don't even drink them but I'm sure approximately 50% of you flip your shit over pumpkin spiced everythings, Halloween candy for sale for pennies on the dollar in November.

2) Spring. ESCAPE FROM THE LONG NIGHT, NCAA Tournament, quarter zips, Revolution A Little Crazy guzzling, those random days where it's like 75 and sunny in late March, St. Patrick's Day.

3) Summer. Air Conditioning, patio drinks for an hour before you'd rather be inside with the previously mentioned A/C, praying your Cubs seats are in the shade for the Saturday afternoon August game against the Pirates you got tickets for, waiting an hour for Jeni's ice cream even though Bobtail in Lakeview is better, Lollapalooza and everything that's terrible about it.

4) Winter. Freeze outside, sweat on public transportation, eating ice cream is somehow considered weird because it's so cold, salt gets stuck in my dog's paws and she does this sad little hop thing until I fish it out with my bare fingers even though it's 3 degrees outside, those random blocks on heavily trafficked streets that don't bother shoveling so all the snow gets packed down and walking on it feels like part of an American Ninja Warrior course, even Jon Snow is shedding any association with it.

So whatever. I'm a #SummerHater and I've come to terms with it. That's ok because it's basically Fall and I'm ready to FEAST on all the wonders Fall has in store for us. That starts Friday night in Madison.

Week 1 - Utah State: Of course we all remember the last time these clownbags came to Madison. Gary Andersen was a missed 37 yard field goal away from pulling the upset. And then he got the UW job and that worked out SO well. For that reason alone, I hope we win by 80 instead of 70.

Week 2 - Florida Atlantic: I never really get the retread approach to hiring coaches in sports. How many up and comers are out there that deserve a shot than giving Lane Kiffin another look? Is it just a ploy at a school like FAU to generate hype/buzz and sell a few more tickets? Whatever, not our problem. Bucky rollllls.

Week 3 - at BYU: Holy shit we should all be going to this game:

We'd have the beer lines ALL to ourselves!

Week 4 - BYEEEEE: Game of Thrones season 7: some truly befuddling plots but wildly entertaining. That's how I'm viewing it. I thought for SURE something would top the season 6 finale, but that's still holding the top spot as far as best episodes go.

The hottest moment of season 7 has to be seeing Drogon in action roasting the Lannisters with the Dothraki hootin' and hollerin' all over, right? That was peak Thrones, and it didn't rest on top of a TERRIBLE plot like going beyond the wall to steal a zombie. That idiotic plan took a little zest off the zombie killing, dragon burning, ZOMBIE DRAGON spectacle for me.

The show overcame the weaknesses by being so damn END GAMEY, but I'm really hoping they find more stable footing for bringing the ship into port in the last season. 2019 WHY ARE YOU LITERALLY YEARS AWAY

Week 5 - Northwestern: Bring your ponchos and snowshoes because lord knows there's no way this game is played in pleasant weather. Who's our backup QB? Jack Coan? Get ready kid, because there's a virtual guarantee Hornibrook catches West Nile at halftime. Even when the game is in Madison, these damn nerds find a way to weird it all up. If you want a season ruiner, look no further.

Week 6 - at Nebraska: I read somewhere that Nebraska is essentially trying to emulate the way Wisconsin has built its program... which is ironic given Barry more or less emulated Nebraska when building UW up into a POWER. Time is a flat circle.

Week 8 - Maryland: Really amped for this Purdue/Maryland/Illinois/Indiana stretch of 11 am kickoffs. Big Ten football: DIG IT

Week 11 - Iowa: Get ready for all the TRAP GAME hot takes as Iowa comes to town a week before Michigan. Good thing Paul Chryst is the most boring, level, never-get-too-high-or-too-low dude.

Week 12 - #11 Michigan: I'll speak on behalf of everyone reading this right now: BEAT THESE DBAGS AND BEAT 'EM GOOD

Week 13 - at Minnesota: Annual reminder: the last time Minnesota beat Wisconsin, YouTube did not exist. I love that fact!

Oh yeah, the Darkness are back and they're bringing the HEAT. So good to have them dropping new shredders. This better guarantee a tour.

Jonathan Taylor, RB. A month ago it was just assumed he was redshirting. Running back is shaping up to be a big strength with the return of Brad Brad Bradrick Shaw (still working on it) and the arrival of Chris James (transfer from Pitt). But then Taylor went and busted a couple of 70+ yard touchdowns and it became clear he was just too damn talented to waste a redshirt. Plus, it's kinda foolish to expect an NFL-bound running back to redshirt and stick around for a senior season. The shirt is coming off, and I may or may not be talking about my shirt after he torches Michigan for 344 yards and 15 touchdowns. #ChooChooooooo

Danny Davis, WR. ALL THE FROSH SKILL POSITION PLAYERS! I know nothing about Davis that isn't just regurgitated Twitter and message board fodder. But I DO know that a freshman receiver on the two-deep is worth talking about. Yazz Peavy and Fooms will draw most of the targets, but there's certainly some room for the kid to get in there on jet sweeps and some third downs. Love me some double D action.

IT'S PLAYOFF OR BUST

We don't need to get political to enjoy North Koreans marching to the Bee Gees.

I found this immensely enjoyable and fascinating. 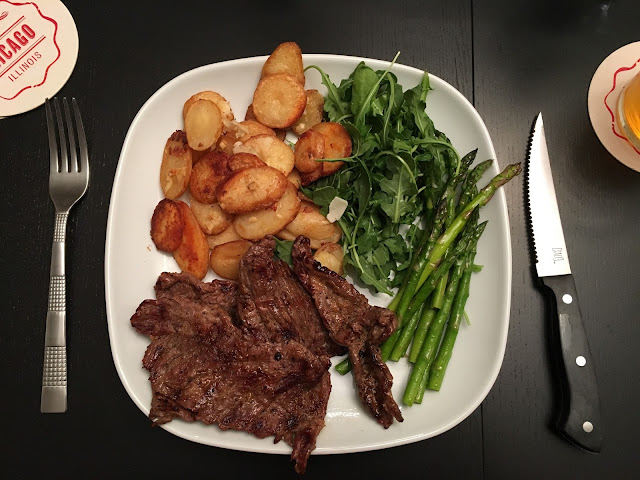 Great things come from humble beginnings. And nothing would be greater than Wisconsin's first trip the Playoff. I see no reason this year can't be that year we finally get over the annoying, proverbial hump. I'm way too sick of being on those 'best teams to never win a national championship' lists. Those are the worst lists. It ends and it ends this year.

But before it ends, it must start. Friday night is that start. Buckle up. THE PICK:

ON WISCONSIN
Posted by Schwa at 9:26 AM