It is POSSIBLE my arrogance got the best of me. I won't deny that. This wasn't the first time I looked at the schedule and decided very early that this was the kind of Saturday I could ease into. We went to Superdawg and I treated myself to a Whoopercheesie WITH a bonus Superdawg. LIVING. Of course, I was checking on my phone the entire time and at no point did I actually think that would happen.

But it did. And it sucked. But we're still here, and OSU is still on the horizon. So whatever we move on and who knows what happens Saturday but at this point it's a reverse house money situation. Lose and oh well the season was already ruined a week ago. Win and WHOA HEY LOOK OUT Bucky's back in the picture.

That's glass half full living and there's no other way to look at a terrible loss other than 'oh well that was a kick in the dick but on we go'.

Oh we are WAY under the radar this week:

Five! Five views! Aren't you curious who the other 4 people were before me? How many people are even in this band?

Never mind, it's literally one random German dude. We are getting weird today.

Today: Oh hell YES the game is at 11 am, I don't have to sit around all day waiting for us to get killcrushed!

3. Wisconsin, 6-1 (3-1). One astute reader has made an observation that I'm struggling to live with: 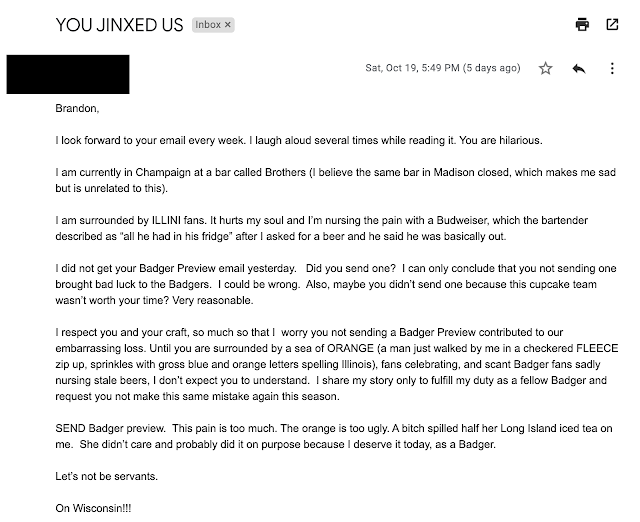 WAS THIS ALL MY FAULT? Badger Preview CURSE? Haven't slept since Saturday just thinking on that.

PS - I really enjoyed how composed this email was right up until 'A bitch spilled half her Long Island iced tea on me'. You can FEEL the frustration leaking out in those words. That sentence was typed with utter anguish. I'm sorry and who the hell drinks Long Island iced teas?

4. Minnesota, 7-0, (4-0). Losing to Illinois really sticks me in my ripping Minnesota for not beating anyone craw. Even these phonies beat the Illini. May Minnesota's future legitimate opponents bundle them back to the ice age where they belong.

5. Iowa, 5-2, (2-2). It was wisely pointed out to me that the most obvious Halloween costume this year will be the WHITECLAW. Goddamnit. Whiteclaws everywhere. I cannot WAIT for the hard seltzer fad to be over. I have no idea what’s even in these things, they’re not that good, and everyone should just be drinking quality rosé like a normal, well-adjusted human.

6. Michigan State, 4-3, (2-2). Speaking of rosé, welcome to the debut of the Badger Preview Rosé Power Rankings:

1) Miraval. Super smooth, good bottle shape for smaller refrigerators. Have we spent enough time discussing the lack of a ‘d’ in ‘refrigerator’? What sense does it make that fridge is an actual word with a ‘d’ in it and refrigerator OMITS the ‘d’. NEVER OMIT THE D.

2) Whispering Angel. You see, the fancy script on the label means it’s CLASSY. Also available in magnum sizes because sometimes you gotta feed a little speed to your ride.

3) Pool Boy. Mainly because it’s the only drinkable rosé that comes in a plastic bottle, which makes this a necessary accessory for any summer gathering. Sometimes you gotta prioritize convenience over quality, and that’s ok.

4) Tie between Studio by Miraval and The Palm by Whispering Angel. BRILLIANT marketing moves. Release slightly cheaper versions of the best rosés on the market and watch the billions flow in. I am slightly concerned that every rosé listed here comes from the same factory and I'm just a stooge. Isn't that what happened with Bulleit whiskey? Everyone was out of their minds in love with it and then we all realized it all comes from the same factory as 17 other whiskeys. That's my story and I'm sticking to it.

7. Nebraska, 4-3, (2-2). One month in and I am fully onboard with YouTube TV. Rock solid and I love having that everywhere I go. Also this is refreshing:

PS - oh it looks like the line was bet back the other way, that makes sense.

11. Northwestern, 1-5, (0-4). Speaking of betting on sports, if you ever want a sure winner just ask me what I'm picking and fade the hell out of me. I am a HORRENDOUS sports bettor which sucks because it looks like so much fun winning money with your friends.

12. Purdue, 2-5 (1-3). Early reports on the new Kopp's burger buns are not good. I am officially upgraded to threat level MIDNIGHT. If we lose Kopp's burgers, we lose America.

14. Rutgers, 1-6 (0-5). Should we start a counter on how many days since they've joined the B1G? And use that as additional ammunition for ejecting them with extreme prejudice from the conference? Hate them.

Was that just a day ruiner?

There's a lot of good burrito advice in here! Allow me to add my proper quesadilla making advice:

1) Get some extra virgin olive oil going in a large pan over medium to medium high heat. DO NOT USE BUTTER. BUTTER IS FOR LOSERS

2) Use one giant tortilla. One giant FLOUR tortilla. Don't even think about that nonsense of using two tortillas and making a homemade Taco Bell Mexican pizza type of quesadilla. Disaster waiting to happen. Throw a pound of shredded cheese in half of the damn giant flour tortilla, add a little garlic salt and pepper, and fold that sucker over.

4) Press that shit down with the spatula to make sure it bonds top and bottom together as the cheese starts melting.

5) Take a peek underneath and if the tortilla has started browning and crisping, carefully flip that bad boy over and swoosh it around in the oil.

6) Press down with the spatula to ensure proper even cheese meltage. Swoosh around in oil again to make sure both sides are properly crisped.

7) Remove from pan, pizza cutter into 4 slices, shove into your face hole.

The Univisión interview in Spanish really put it over the top. Well done, Mark. 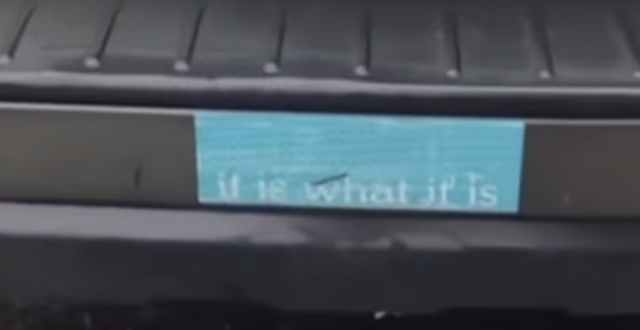 Sometimes it ain't gotta be like it is, but it do.


I saw this video but then lost the link to it and was upset because I really wanted to share my joy. Naturally I just googled 'guys use mate as pool cue' because there's no way they weren't absolute MATES to do something like this. The second you see those haggard ass haircuts and the red pants you know we have a lad-mate situation.

PS - In the game of life, you're either the lads having a go or the mate being the cue. You want to be the lads. Don't be the mate. 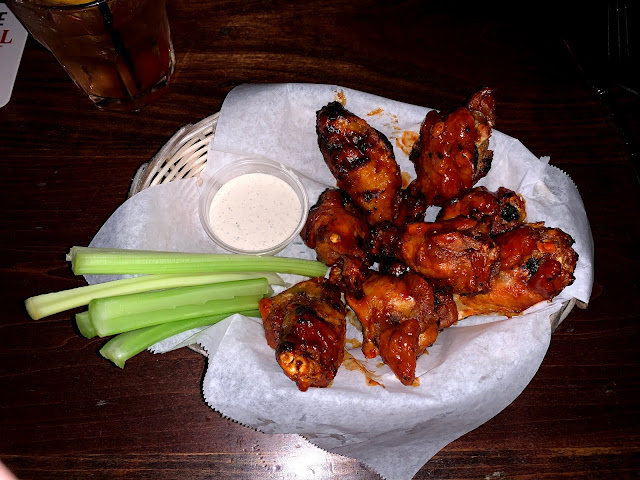 Buffalo wings from Floyd's Pub. ADMIRE THE GRILL MARKS. What is it about grill marks that gets me all hot and bothered? These wings were great, sauce was working, ranch had proper drippage... but the fact that they're fried AND grilled gave them an edge over your generic bar wings.

PS - I think Chicago's wing scene is still developing. I can rattle off my top 10 favorite burger joints in the city, but there are only a couple of wing places that stand out. Bird's Nest remains the champion, Melnick's is your more upscale flavor operation, and then from there it's the wild west of wings. You've got the Korean Kontenders (Crisp, Bonchon). People will swear by Output or Aberdeen Tap, but I've never dabbled. Buff Joe's in Evanston has gone downhill in wing quality and uphill in price (still most outrageous cheese fries and top tier sauce game). Duke's had by far the most underrated wings, but they were always a doomed operation.

So what am I missing? What wings must I chew in Chicago? Let's talk. 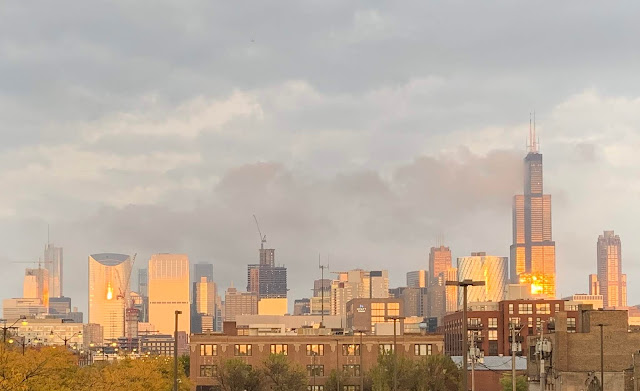 It frustrates me when a picture doesn't do reality justice. These early fall sunsets have been fuego and that almost kinda sorta makes up for the fact that it's dark out at 6 pm.

Betwixt you and I, the old optimism well has run dry. This looks like a classic demoralized team stumbles into the hornet's nest, except the hornets have 7 first round hornet picks and beat everyone by a million and every journalist from Columbus to Colombia has 'The Badgers simply couldn't keep up with the Buckeyes speed' queued up for the first paragraph of their recap. RATS. THE PICK:

ON WISCONSIN
Posted by Schwa at 12:55 PM