Has anyone figured out the age at which you actually care about homecoming? I am prepared to announce it is not anything under 34, because not the once have I cared at all that OMG IT’S HOMECOMING! Just doesn’t resonate with me. I’m a longstanding member of Team #NormalMadisonWeekend when it comes to picking your pilgrimage weekend in the fall. I think that makes me old in that I hate overly crowded scenes, but not SO old that I cherish the spirit of homecoming. So lovely living in this abyss betwixt kinda old but not yet super old. TIME TICKS FOR US ALL.

Ignoring the pomp and spirit of homecoming, this IS a big weekend in Madison. I don’t care what their record is or what happened to them the week before, MSU is always on my radar. My spidey sense is firmly tingled. Threat level remains at midnight when they’re in town. There simply is no way to shed the nightmare that was that game. I think it’s healthy to get to a point in life when you no longer let sporting events ruin more than like 17 minutes of your life, and for the most part I’ve done that. But if you bring up that GODDAMN HAIL MARY or the Duke National Championship game then I am going to immediately cease communications and leave. The world would be better if those games never happened, and this is objective. Fact. Bullshit on ALL LEVELS.

This is a long way of saying there’s no sleeping on Michigan State. We are not fast tracking this thing to the showdown in Columbus. Ain’t nobody got time for looking ahead and tapping the cruise control. These guys got smacked around and would love another chance at a signature win, and we are NOBODY’S signature win. Go back to East Lansing.

What vibe are we catching here? A little Foster the People? Is the singer trying to do a mass seduction with this whispery, sultry verse voice?

PS – I think all of my favorite songs do one of two things in the bridge: WRECKING GUITAR SOLO or building up before killing most of the instruments and letting the hook go with just drums before adding everything back in. Love that. Can’t get enough. Walk The Moon nailed it with that Timebomb breakdown. The Darkness get the best of both worlds on I Believe In A Thing Called Love. Could Have Been Me by the Struts? Stompalong singalong heaven.

If there’s not already a list of the best bridges/breakdowns of the last 50 years then I may have to take a week off work and get listicling.

PPS – Jumper by 3eb, especially live, is right up there


3xPS – All These Things That I’ve Done is a MASTERCLASS in slowing ya down before blowing the roof off the damn house. Choruses get all the love, but I am just now learning I’m a big time bridge man 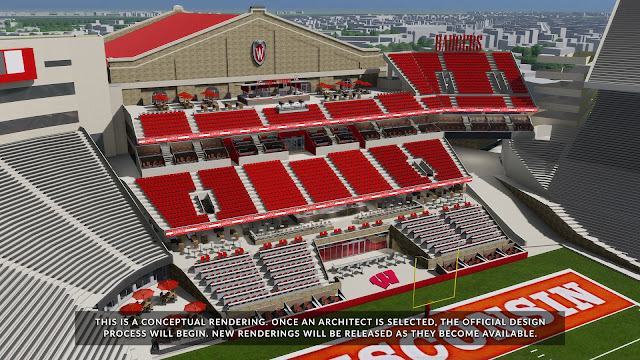 This looks like a LEGO video game. But whatever. They're gonna replace the most fun section during the wave with UPSCALE seating and I don't really care because 100 year old stadiums need to evolve. Only old people complain about how Fenway and Wrigley have modernized. I don't care what anyone says, going to a Cubs game and being able to see an actual damn replay is a good thing.

If the money that comes in from this project helps the recruiting budget, then I'm all in times a million. 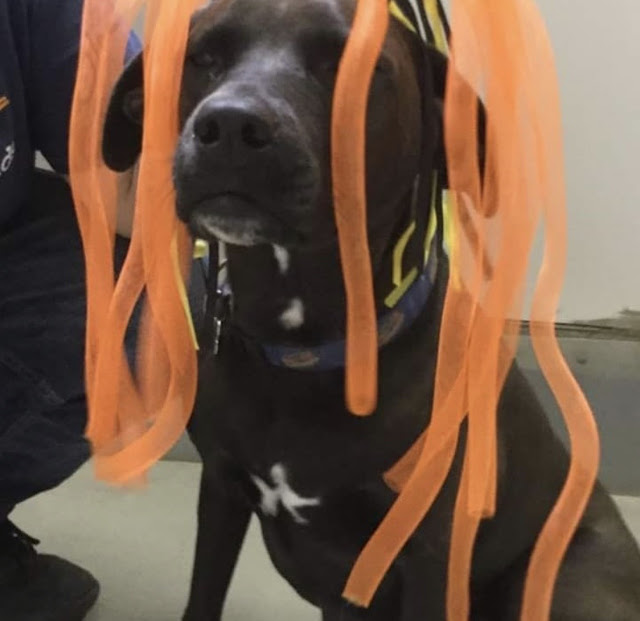 I think I almost have enough of these at this point to make a ‘MY DOG HATES THEME PARTIES’ calendar. Usually I think she’s just being a baby about it, but I’m gonna take her side on this one. Whatever the hell this orange dreadlock monstrosity of a hat is would offend me as well. Couldn’t they find an oversized sombrero for her? A fez? Hilarious Vikings helmet with horns made out bones? Possibilities are endless, and yet we ended up with the mop from blacklight bowling. She's the flying spaghetti monster.

I want a refund from that day.

4. Iowa, 4-1, (1-1). How are, collectively, the Sopranos fans of the universe, supposed to react to Chrissy Moltisante ending up on the D-list celebrity Chopped circuit? 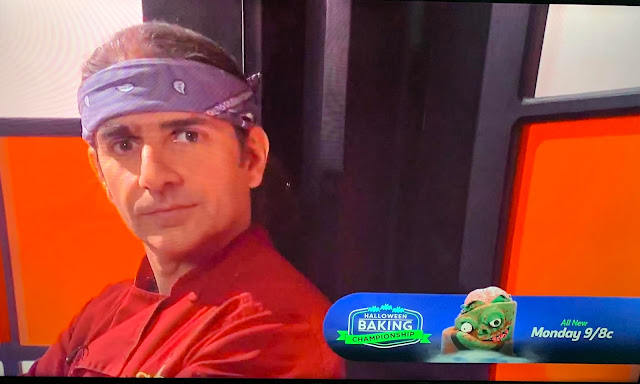 Selling tequila is one thing – and borderline on point for the alcoholic character on a show full of alcoholics. But is this what it’s come to? Spider in Goodfellas grows up to be Chriss Moltisante in Jersey and then tumbles off a cliff into dragonfruit infused balsamic reduction glazed tequila marinated escarole and Jersey beans?

PS – on a show full of bad ideas, was there anything worse than agreeing to an intervention of a guy who had literal murder dirt on everyone else in the room? What the hell were they expecting to happen?

PPS – Chrissy got everything he deserved after literally butt squashing Adrianna’s dog to death. It is killing me that I’m blanking on the poor pup’s name and I’m on an airplane so I can’t google it, DAMN IT.

PPPS – Caruso? Courso? Something stupid and French sounding? UGH. Shouldn’t it have had a nice, wholesome Italian name like Mario Junior?

5. Michigan State, 4-2, (2-1). Speaking of airplanes, what kind of licensing agreement do they do where they get to stream episodes of the Office, but only the same goddamn 4 episodes for months on end? No one enjoys the lice episode, or Jim going to Athlead, or Jim and Dwight Junior rebelling against plop and fart identities. This is like bad Office purgatory. I’m actually okay with the delay my flight had because now I can watch football instead of pretending to enjoy the abyss of late season Office.

6. Minnesota, 5-0, (2-0). Hard to say which late Office character was a worse addition amongst the MANY contenders. Robert California and the house party? What the hell? DeAngelo Barksdale, which I’m now second guessing if it was Will Ferrell’s character or the beginning to my new Office/Wire crossover? Nellie? NELLIE? Nellie with Toby rubbing her shoulders at her desk? What the hell, Toby? If a man’s gotta have a code, then what happened to Mr. HR’s code?

Late Office is where dreams made become dreams destroyed.

7. Nebraska, 4-2, (2-1). Every time I sneeze on a plane I am mortified to no end. Most of that is because you have to assume that everyone within 14 rows of you is wondering if you’re PATIENT ZERO with the rare New Jersey River Flu. Patient Zero is NOT where you want to be.

8. Maryland, 3-2 (1-1). The NFL is a trillion-dollar enterprise with resources we can’t even imagine. Which is why I want to claw my eyeballs out every time a 73 year old ref runs in from the sideline zig zagging through players to ‘spot’ the ball, and THEN they bring in chains to measure to the nearest inch as if ANYTHING they’re doing is accurate. Which is compounded even further by the constant reminder that the yellow line is not official. As if THAT’S the part that might be off.

It shouldn’t be this hard to spot the ball quickly and accurately.

9. Michigan, 4-1 (2-1). Someone on this plane near me farted and I don’t have anyone else to tell so there you go I am not enjoying it and the only restaurant in the terminal was a Mexican place.

10. Indiana, 3-2 (0-2). Do we have the hot Halloween costume of the year yet? What’s the one costume you’ll see on 5 people at every party? I’m slightly concerned this hasn’t happened yet, and you have GOT to be on your toes in the home stretch here.

“Did my mother know you were a serial killer?”
“Which answer do you want to hear?”

“Your father was a serial killer, and yet I’m still the monster…”

I intentionally avoided hearing the name of this show just so I can go back to not knowing it even exists.

12. Purdue, 1-4 (0-2). Kopp's is changing their buns and let me be the first to say that I WELCOME our new buns. It was impossible to do a Kopp's burger justice with a pic because the old buns just looked like crap. Now we know they were made in some Bangladeshi sweatshop out of spare parts and chemicals and we can safely say this is a transition worth going through.

While there’s definitely a lot of ‘don’t mess with what works’, you have to give Kopp's credit for minor evolutions to keep things fresh. Introducing Nueske’s bacon, RANCH, ‘special’ burgers… this is the kind of iterative burger production that keeps the charm while enhancing the experience.

Even without star power


At first I was worried this was steak MADE out of olives. BEYOND WAGYU. But it now appears it is simply beef from cows that ate olives or something like that. Anyway, this was somehow worth the entire watch, and if you leave early you miss out on the fun:

In case you're wondering, it costs approximately $300 a pound. I would be way too scared to try cooking this meat butter.


And let's just stay on the Cranston train while he summarizes home ownership in under a minute. Owning a home looks FUN. 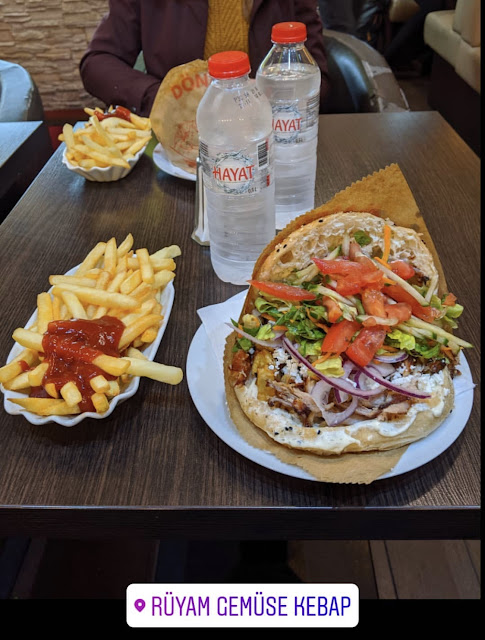 Several years ago we stumbled upon the best döner kebab joint in all of Germany. And every single time since that someone mentions they’re going to Berlin, I INSIST they go to Rüyam Gemüse Kebap. I will send you the google maps link, force feed you the pics of my kebabs from 4 years ago, and BEG you to bring me home a bucket of whatever the hell the Turkish equivalent of crushed red hot pepper is. I’m not kidding when I tell you this is the best seasoning money can’t buy, because oh LORD have I tried. My google search history is littered with ‘Turkish seasoning’, ‘spicy Turkish seasoning’, ‘kebab pepper flakes’, and any other tangentially related query I can come up with. I have SCOURED the web looking for somewhere to order this seasoning, but have come up empty handed.

So naturally when some friends said they were going to Germany for the Berlin marathon this year, I DEMANDED they enjoy the finest ümlaütsed kebabs the world’s ever seen, and politely requested the Turkish fire powder finds a way into their luggage. This weekend I shall find out if I have completely fabricated and exaggerated the wonder of this Turkish kebab crack dust, or if my life just got 10x better. TO BE CONTINUED 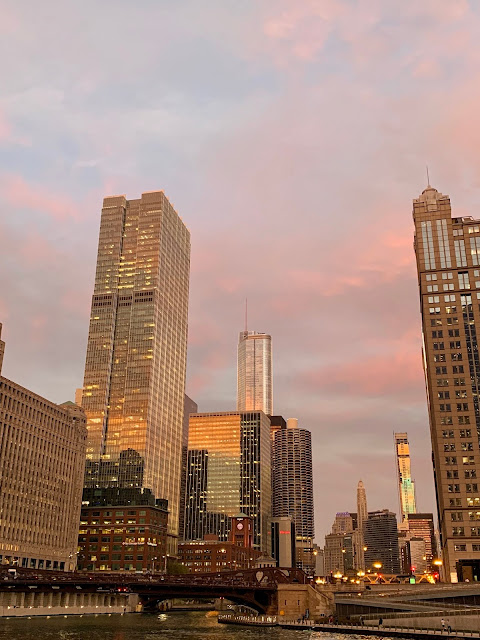 I was privileged enough to attend a fake wedding last week on one of the tour boats in Chicago and let me tell you: fake weddings are dad joke HEAVEN. The amount of ‘awww, they really look like they’re gonna make it!’ jokes I made was ASTOUNDING. Between that and taking 4,000 pictures of everything BUT the fake bride and fake groom, I am officially uninvited to all future Chicago river fweddings. WHATEVER.

ON WISCONSIN
Posted by Schwa at 2:27 PM