Sitting at work the Friday after Thanksgiving, this is pretty much my strategy for the day.  This is George Costanza... I fear no reprisal!

Anyway, that Illinois game was a classic case of knowing we were gonna somehow win, but still being terrified the whole time.  A couple of fortunate penalties, an invigorated 2nd half defense, and a steady dose of the Montee Ball Show were all UW needed to leave Chambana with a victory, though.  Big game this week as UW takes on embattled Penn State to win WhicheverDivisionWe'reIn and secure a spot in the first ever Big Ten Championship Game.  And the winner of that game gets to spend New Year's in Pasadena.  I like it.  Let's do it.

CHICAGO BADGERS: You should go to Madison, but if you don't, I'm gonna highly recommend Will's.  That place is amazing.

QUICK NOTE: This will be a seriously abridged preview.  It's Thanksgiving and I've got 3 dinners to eat, the last of which will be White Castle.  We'll be back with a full preview next week.  Hopefully. 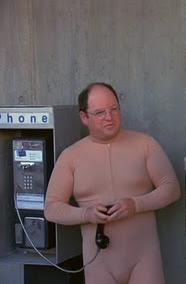 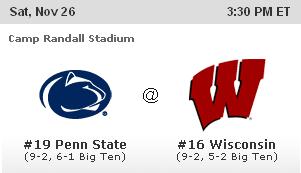 TV: ESPN
WEATHER: RAIN. SAY SOMETHING NICE ABOUT PENN STATE Yeah, that might be a little difficult right now. THE BEST MEALS IN MADISON 1) Double Sicilian Mac & Cheese - Ian's Pizza SHOCKER.  I wish I had one more curveball to throw you here, but there's simply no denying the glory that is Ian's Sicilian Mac & Cheese.  As if regular mac & cheese pizza isn't good enough, they had to go ahead and make it available in deep dish.  Genius: 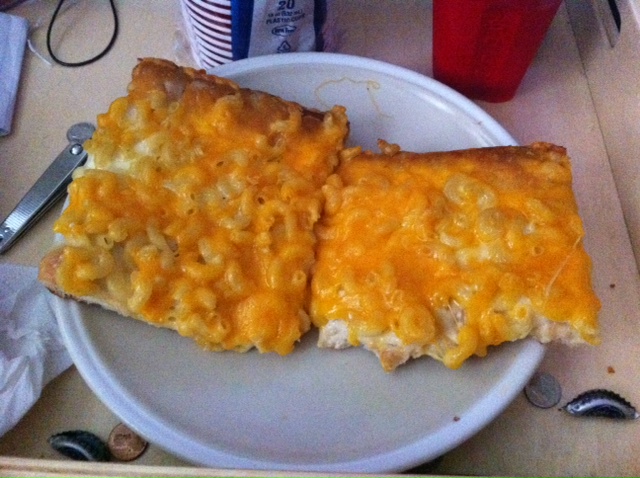 MATCHUPS TO WATCH
Penn State D-Line vs. UW O-Line Big battle in the trenches on Saturday as probably the best front 7 in the Big 10 rumbles with the top offensive line in the conference.  It'll be especially interesting to watch as UW is shuffling around some linemen to compensate for injuries.  Konz will probably sit this out and get that ankle healthier before returning.  Groy tried plugging in at center, but he botched two straight snaps against Illinois and got bumped.  Regardless, I expect the Badgers to come out fired up on Senior day with a spot in the B1G Championship Game on the line.  Time to manhandle Penn State.  ROLE REVERSAL. I'm sorry, the Penn State jokes are just way too easy.  It's really just child's play. OK, I'm done. RANDOM MUSIC THAT I'M DIGGING HARD THIS WEEK The Used - The Taste Of Ink Rock. Jay Zeezer - Say It Ain't December 4th Sean Carter was born December 4th. Coheed and Cambria - Welcome Home NHL 10, anyone?
THIS WEEK'S GAME IN HAIKU Let's go to Indy Big 10 Champs?  I can dig it. First?  We beat Penn State YOUTUBE This is the scariest thing in the world and I think I just threw up a little. I'm pretty sure this is fake, because if it's not then it is most definitely the most cruel thing ever.  I want to cry for Edgar. PS - Never name your kid Edgar, just setting him up for disaster. FOOD PORN THANKSGIVING EDITION! 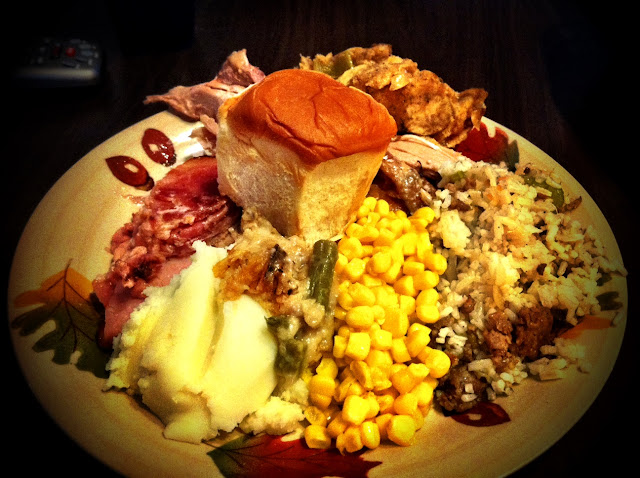 If you don't know the story by now, I go to the world's worst Thanksgiving dinner every year.  The food is just terrible.  Fortunately for me, though, my roommate had a Thanksgiving feast in our apartment.  Turkey with FLAVOR, actual gravy, mashed taters... all the glorious things I miss out on every year.  I was in the middle of shoveling my second plate down when I got picked up to go to Crapsgiving.  As you can see here, I made sure to load up as much as possible before heading out. 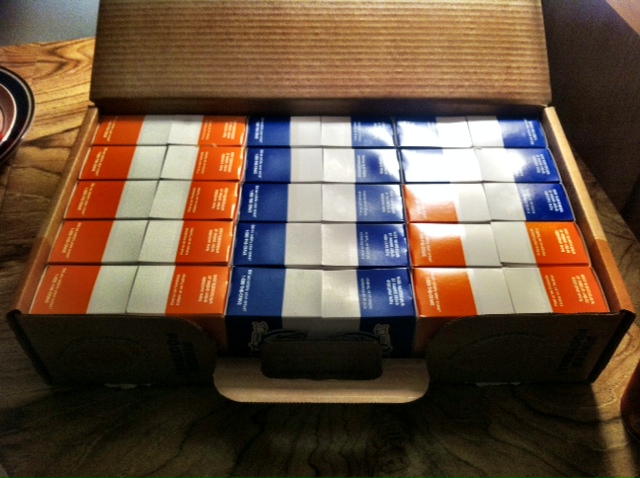 After dinners #1 and #2, it was finally time to indulge in my favorite tradition: Thanksgiving White Castle.  You see, after Crapsgiving every year my family books it straight to White Castle just so we can be as full and content as everyone else is.  Easily one of my favorite traditions, mostly because I fucking love White Castle and I don't get it nearly as often as I'd like.  As of Friday morning we had 4 of the original 30 left.  Those will be eaten within seconds of me getting home today. PS - Dessert at Crapsgiving was always the highlight because my aunt would bring those little Haagen-Daaz cups with the wooden spoons.  LOVE the wooden spoons.  Anyway, she stopped coming and this was offered up to us last night: 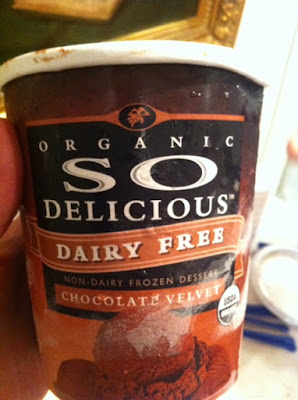 That's a sick joke.  Organic dairy free frozen dessert.  It's not even classified as an ice cream.  It's just a dessert.  Fuck everything about this. 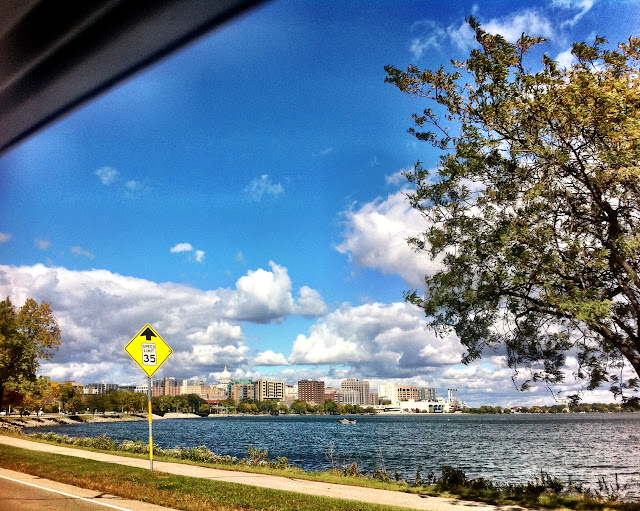 Took this one driving in for the Nebraska game.  Just a perfect blue sky, great clouds, and amazing view.  I would very much like to go back to Madison sometime soon. PS - I think I used this picture already but I'm not sure? RANDOM SEINFELD CLIPS BECAUSE I'M BORED One of the most outrageous stories ever told.  And only one person could tell it this way.  Hot Quote:

"Then I managed to open up the door and I kicked him out the door, ya know, with my foot, ya know, at the next stop!"


"You kept making all the stops?"
"Well, people kept ringing the bell!"

To date, still the best blooper reel ever.  Hot Quote:

"It's the kung pao... George likes his chicken spicy!"

Maybe that was a little redundant.

It's not really a quote, I just love later on when Jerry starts singing it to himself.  And when George does the little shrug duing the 'where could I be?' part.  Great stuff.

THIS WEEK IN ACCIDENTAL MIDGETS 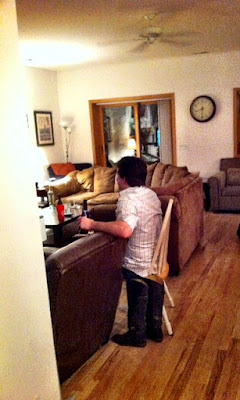 I haven't stopped laughing at this.  Amazing what a well placed pair of boots can do to an otherwise normal situation. 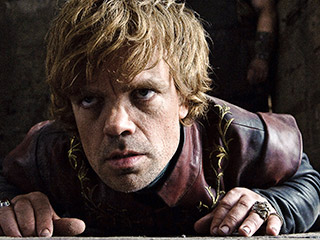