Saturday, 5pm: OK, I'm finally ready to move on from the MSU debacle.  A win in Columbus is ALWAYS nice, especially when it will let us control our own destiny for getting back to Pasadena.

9:20 pm: HOLY SHIT HOW DO THEY LEAVE ABBREDERIS OPEN, GOOD THING THEY CAN'T PASS, WE'RE FOR SURE GONNA WIN THIS.  WORST CASE WE GO TO OT AND JUST KEEP SCORING TOUCHDOWNS.

9:23 pm: How is he so open.  Why is he so open.  What the fuck.  2 weeks in a row.  If there is a god, he/she/it most definitely hates Wisconsin football.  I really have no clue how to process what just happened.  2 WEEKS IN A ROW WITH THIS BULLSHIT?  WHY?

Too much text?  Don't feel like reading?  Here it is in graphical form:

I feel very defeated.  Bill Simmons always talked about his 'Levels of Losing'.  As a Cubs fan, I'm all too familiar with them.  And we've seen some painful Badger losses before - in football and basketball.  But as far as I can remember, each of these games INDIVIDUALLY were more painful than any previous Badger loss I've experienced.  Putting them back-to-back on national television with sky-high expectations?  Excruciating.

So here we are.  6-2, 2-2 in conference, needing help from OSU AND PSU to make it to Indy.  Truthfully, I'm not even mad about this season.  I'm really not.  It's just sad.  I really do hope the Packers keep dominating and Bo Ryan does something special this year.  Lord knows the state of Wisconsin needs them.

PS - I finally figured out a good way to illustrate how I feel:

CHICAGO BADGERS: Just keep in mind that we're more than halfway through college football season, and soon enough it will be freezing and you won't have excuses to daydrink on Saturday.  Get out there and do something.

SHAMELESS PLUGS: Because I forgot to link to this last week, which was obviously just a glaring omission. 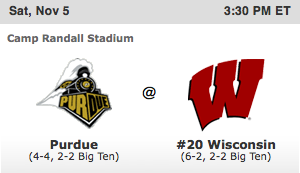 TV: ABC/ESPN2
WEATHER: 56 AND SUNNY, NOT A LOT OF THESE DAYS LEFT.. BECAUSE, YOU KNOW... WINTER IS COMING


SAY SOMETHING NICE ABOUT PURDUE

THE BEST MEALS IN MADISON

Let's clear one thing up right away: WTF is a dowry? 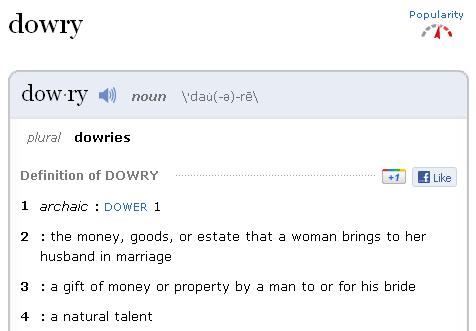 Seriously, I sit here baffled trying to really understand why this place is called a dowry.  But at the same time, allow me to say that if dowries were still a 'thing', I have to believe that a Melting Pot burger (w/ preceding app sampler) would be the best dowry ever.  I know, some people got lands, titles or estates.  But I'm talking about the freaking MELTING POT.  If, somehow, you don't know what that is, DON'T WORRY.  I'm here to enlighten.

The Melting Pot is everything that is awesome about Wisconsin cuisine.  Cheddar, swiss and provolone cheeses melted together with bacon and English garlic sauce - all dropped on top of a delicious piece of beef.  What else could you ask for?  Maybe double bacon?  Sure, I suppose that sounds pretty good.

And that damn English garlic sauce.  I'm about 99% sure it's just mayo (which I usually despise) with a buttload of garlic mashed into it.  AND IT'S SO DAMN GOOD.  They serve it (along with a side of ranch) with the app sampler and I just can't stop dipping fried awesomeness into it.  Fries, curds, onion rings, mac and cheese wedges (the first place I ever experienced this delicacy)... all are 10,000x better with ranch and English garlic sauce.  You'll note that I didn't mention the fried mushrooms, because mushrooms are gross old people food and I refuse to play that game.  And don't even think about asking for a substitute, because the sampler is pre-measured and packaged billions of miles away apparently.  Hmph. 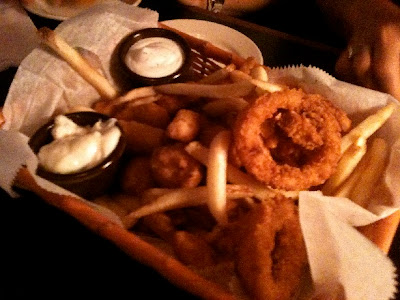 Regardless, this is one of the ultimate 'family's coming into Madison, time to get a free meal!' places.  Usually it's a jusssst a bit too expensive to justify on a Tuesday night when you're a broke college student, but it's perfectly acceptable as a place to celebrate an occasion or shake your parents down for some tasty grub.

Good beer, too.  That always helps.  But probably should be a given considering it's in Wisconsin.  WISCONSIN IS SO GREAT AND COOL.


PS - I have never spelled the name of this restaurant correctly on my first try.  Easily their biggest mistake making such a confusing name.  Also, being directly next door to Ian's.  Don't infringe on my pizza wonderland.

PPS - What would it take to get dowries back business?  It's not like anyone's calling for the return of prima nocta or anything crazy like that.  I just want me some dowries.  That's it and that's all.  Although, perhaps I should work on finding a wife first...

My Sanity vs. Impending Emotional Collapse

This season is litrally killing me from all angles.  I'm afraid that at this point, one more loss will just make me dissolve into some kind of puddle of gooey depression, like in T2.  Hopefully if that happens, I'll come back to life with those awesome steel arms he had: 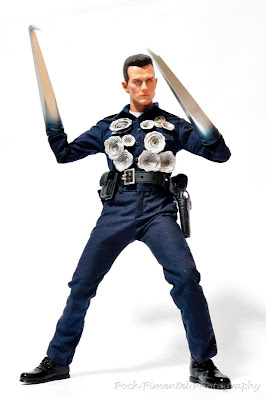 I would do so many totally awesome but questionably legal things with those arms.

So yeah, for everyone's sake, let's just not lose any more games, mmk?


UW Punt Team vs. Purdue Punt Block Rush
I don't know about you guys, but I LOVE that modern punt formation.  The one where you put 3 guys in between the line and the punter.  And those 3 guys are supposed to pick up anyone that gets through the line.  But for the last 2 weeks they didn't and punts were blocked at crucial times in exactly the same way.  And both punt blocks lead to touchdowns.  And both touchdowns essentially were the margins of victory.

Yeah, that formation.  LOVE it.  If it were a woman, I would propose to her right now on the spot.  And then watch as she slowly killed me over and over, turning me into a puddle of gooey depression.

Tell me where the time goes

Oh life, you know it moves much too slow

It's remarkable how many phases I've gone through with 3eb songs in the last year.  And there's no denying how hot this jam is.

Probably the first song I added to our party playlist Halloween weekend.  One of those songs that toes the line between seriously awesome and hilariously stupid.  It's no easy feat to be able to pull that off, but t.A.T.u. (which is assuredly the worst band name out there) does it.  And this song is running through my head, running through my head.  THIS.  IS.  NOT.  ENOUGHHHH.

Possibly my favorite Pink Floyd song, and also one of the top 5 'This Song Really Makes Me Want To Learn How To Play Piano' songs*.  Apparently some form of Pink Floyd is coming to Wrigley next summer.  I can't even explain how much more awesome that is than DMB or Paul McCartney.  I'm for sure going.

*Off the top of my head, and in no order:

No way we lose to Purdue


Not really sure what's going on in this video.  And I'm not really sure what I was expecting to happen.  But I can safely assume it was something terrible.  By the way, your grandma is definitely dead.  Or this is a lost trailer for Weekend at Bernadine's.

PS - Bernadine is the female equivalent of Bernie, right?  Boom, my first child will be named Bernadine.  HOT name. 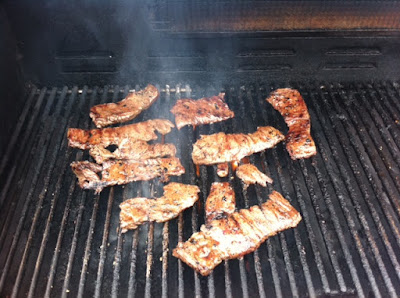 This isn't the best picture I've ever taken by ANY stretch, but I wanted to take a minute to talk about how much I fucking LOVE skirt steaks.  I have no clue why they don't get more mainstream love - hell, you can barely even find a good cut of them in Wisconsin.  But skirt steak is hilariously underrated.  I think it's common in Argentinian cuisine, and it should be prevalent in ALL cuisines.  Consider:
So hit up a spot like Tango Sur and go to town on the skirt steak, because you'll never think otherwise.  Bring me the leftovers as a dowry. 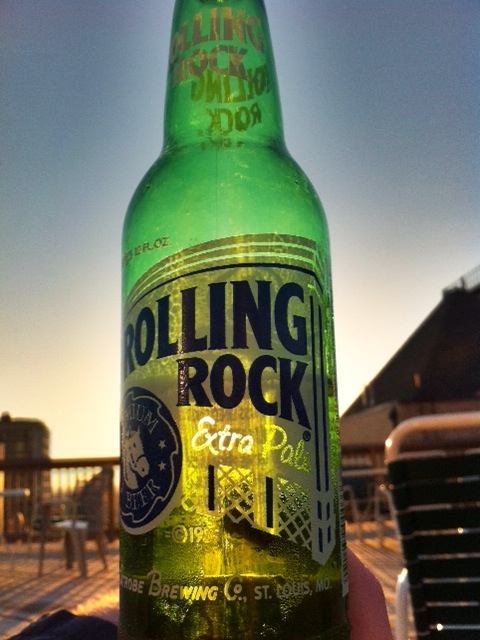 Kinda cheating, but if you think about it I'm actually not.  This picture is awesome, IN MY HUMBLE OPINION, because of the sun shining right though the best beer (and bottle) in the world.  There's no secret that I'm a Rolling Rock fiend.  It slays me how few bars have it available.  Rolling Rock on tap?  I'LL TAKE 13.  I thin Halligan's or one of those crappy Lincoln bars has it on tap and I just go to town on it.

Also, this pic makes me miss my old apartment, which had one of the sickest rooftop decks around.  And for some reason, the thing was almost ALWAYS empty.  I have few regrets in life, but one of them is not having 78 more parties up there.  Womp womp.

I swear, if we don't win this game I'm gonna do something crazy.  I have no idea what it will be, when it will happen, or who it will affect.  Just know that no one wants to find out.  SO CAN WE JUST WIN?  The Pick:

ON WISCONSIN
Posted by Schwa at 9:36 PM