Couple things I wanna talk about before we get to the chicken tenders and/or Illinois game:

I don't think enough people are blown away with the numbers that the MBS is putting up.  Seriously, look at these numbers:

Oh yeah, he also threw a touchdown, giving him a 640 QB rating.  I believe that is pretty good.  The point is that there's no reason Montee isn't right up there in the Heisman conversation.  Just like there's no reason Black Jesus isn't a top 3 candidate right now.  I understand that you need to win to really be considered, but do voters ever think about how teams lose?  In both losses, Wilson orchestrated last minute comebacks to tie/take the lead, only to watch the defense fuck it all up by allowing hail mary's all up in our face.  I understand the caveat that we wouldn't have been in that position to begin with if Wilson hadn't made some questionable decisions along the way, but the guy is putting up historical numbers for a team that should be going back to Pasadena for a second straight BCS bowl. And here I am, back to gushing about Wilson when I'm supposed to be singing Montee's praises.  These guys combined may be hurting each other's Heisman chances, but combined they're the most fun backfield to watch in Badger history.  And they both could be gone next year.  Enjoy it while it lasts. Not only is Minnesota still terrible at football, but they're a bunch of whiny babies as well.  You know how the winning team always chops down the goalposts?  Hell, I even wrote about it as a matchup to watch last week.  Well, apparently some Minnesota players (and maybe some coaches, can't remember) took offense to that and had some words for Wisconsin.  To which I say, grow a pair.  Don't want us chopping down your goalposts?  Win a damn game.  This was supposed to be a rivalry, but I think those require two teams that are of comparable talent levels in addition to hating each other. This isn't directly related, but I love the Wisconsin football swag.  And I'm not just talking about UW.  The Packers had one of the most blatant Eff You playcalls I've ever seen on Monday night.  After Jared Allen started being a douche like he always is, Rodgers got right back up on the line and went for it on 4th down, converting and leading to more points.  It was GREAT.  Basically saying, 'Hey, you can celebrate all you want, and you might even get a sack or two.  But you can't stop us.  Your hair is ugly.  And I bet you've banged at least 3 of your cousins and one of your sisters.  Also, you're a douche.'*  It's just like Bielema going for 2 last year -- you wanna cry?  Cry about this. *Loose translation of what Rodgers probably said to Allen. CHICAGO BADGERS: Got nothing to do?  Why not consider driving a few hours and going to the game?  I can't, because I bring death and losing to road games apparently.  So I'll be watching from the comfort of my own apartment.  Or a bar if I get peer pressured.  Huge love/hate relationship with peer pressure.  It's SUCH a good feeling when you successfully peer pressure someone into doing something.  And you would think getting peer pressured into doing something would feel terrible, but I find that to be almost as pleasing.  Maybe that's just because the only things people get peer pressured into doing are going out, drugs, and... um, maybe that's it.
UNINTENTIONAL COMEDY ALERT: Just Google image search 'peer pressure.' 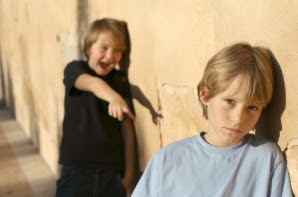 Are... are those the same kid? 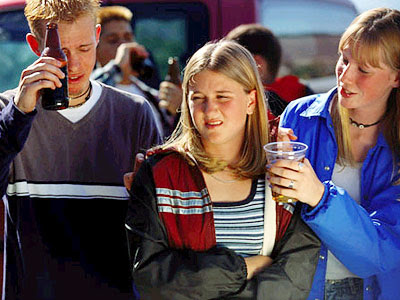 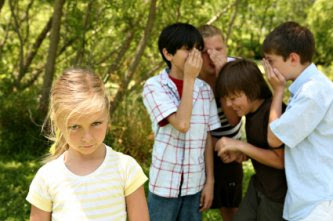 "I can't believe she wouldn't drop acid with us, what a prude!" 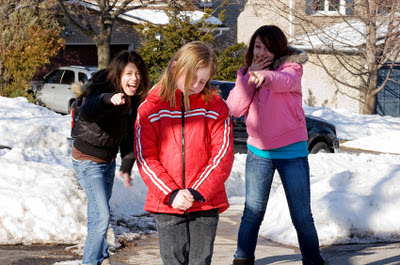 Half of the jokes I'm coming up with are disgustingly inappropriate.

SHAMELESS PLUGS: Can I peer pressure you into hitting up my tumblr and reading some Hot Glove and Brent Favre posts?  No?  BUT EVERYBODY'S DOING IT.  LIKE DRUGS. WHO/WHERE/WHEN 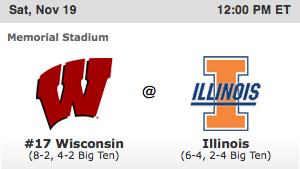 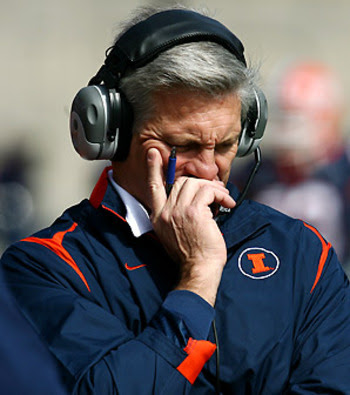 As long as this guy is coaching, there's simply no way to look at Illinois as a true threat.  Seriously, this actually happened:

After falling behind to the Hoosiers early, the Illini battled back to take a 20-13 lead midway through the second quarter, and Zook, decided he would go for two.
But why?
“We were down five, right? Up five, I mean,” Zook said after the game. “It was 20-13? Up seven?
“Maybe I didn’t know what the score was. That’s happened to me before. It’s usually when we’re behind. [This will] give you something to pound us about.”

Are you kidding me?  That's amazing.  This guy needs a 27 year extension IMMEDIATELY.  I fucking love Ron Zook and everything he stands for.  Guy just doesn't give a shit, goes for two when he wants, has no idea what the score is, and apparently has an evil twin brother out there somewhere: 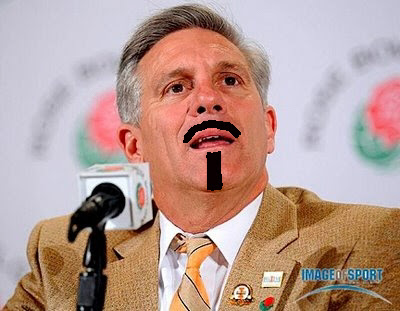 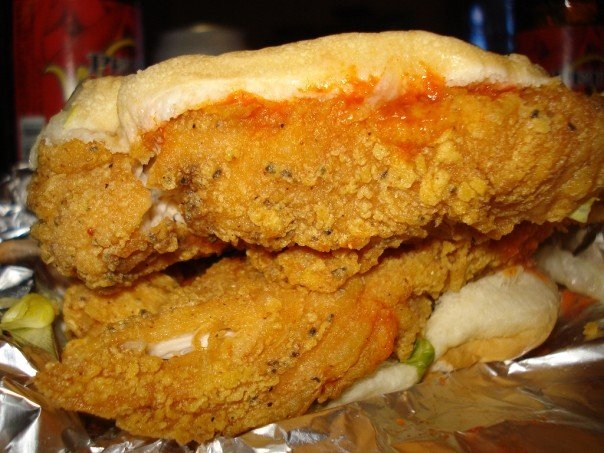 The glory that is Jin's.

To this very day, I have no idea why Jin's was so fucking good.  It was literally chicken tenders on bun with lettuce and hot sauce.  But it tasted like the fucking rainbow.  I have since determined that these are the leading contributors to its massive appeal: Can't forget that last part: No meal could possibly make my list if it didn't taste amazing, and those tenders are absolutely fantastic.  Would ranch have put this sandwich over the top?  Of course.  But that's not how Cornelius rolls.  Occasionally I dabbled in the Mayo (read: When I was too hammered to order it without mayo), but for me it was always better drenched in hot sauce.  Plus, mayo is unhealthy. The VIP line was always something that intrigued me.  I usually didn't spring for it because I was poor and liked watching the fights in line*.  But my roommate was a HUGE VIP fan.  On more than one occasion he would come home with something like this: 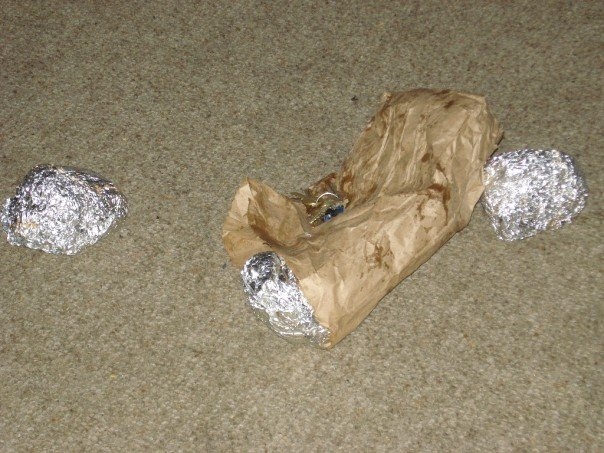 That's at least 4 sandwiches right there, for no more than 2 people.  $40, easy.  Now that I think about it, the VIP line is the greatest business idea in food truck history.  Two windows: a regular one on the front and a VIP one on the back.  Don't feel like waiting in line?  You pay double and you're outta there in 3 minutes.  All business should adopt this program.  Screw the 'buy 10 get 1 free' cards -- let drunk people pay to jump the line legally. Genius.  Cornelius.  One in the same. *Not gonna lie, the closest I've ever been to being in a fight has been at Jin's.  I have a serious problem when people just walk to the fronts of lines like they don't give a shit.  I've been known to box out, call out, and do anything else in my power to maintain the integrity of the line.  Well-aware that I can come across as an asshole when I'm yelling things like, 'Yeah, don't mind us.  We don't really want food.  We're just standing here because we have nothing else to do.  No, seriously, GAH 'HEAD.'  Lay that sarcasm on real thick.  And I always know the people behind me in line are secretly praising me for standing up for them.  Getting skipped sucks.  Watching people pull the drunken chat and cut at Jin's at 3 am on a Friday?  UNACCEPTABLE. 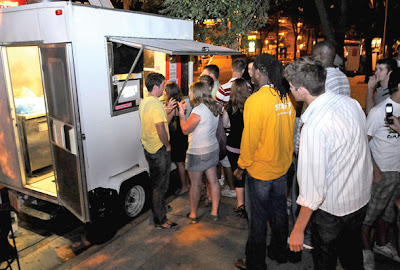 Can't believe this list is almost over.  I'm pretty sure I came up with it last week.  I also wish #1 wasn't so blatantly obvious.  BUT MAYBE IT ISN'T. MATCH-UPS TO WATCH Illinois Defensive Line vs. Black Jesus I keep hearing all this talk about how hot U of I's D-Line is.  You know what else is hot?  Shattering the NCAA record for pass efficiency while saving kittens from trees and helping old ladies cross the street.  Because that's just a standard day in the life of Black Jesus.  So yeah, here's what the JS has to say about their ends:

Illinois junior Whitney Mercilus shows no mercy to opposing quarterbacks.
The 6-foot-4, 265-pound defensive end leads the nation in sacks (12 ½) and forced fumbles (seven) and has a team high 17 ½ tackles for loss.
With 6-6, 240-pound junior Michael Buchanan (six sacks, 11 tackles for loss) manning the opposite end, the Illini lead the Big Ten in sacks with 32.

Whenever you see me quoting a big block of text, it 100% means I'm tired and would rather let someone else do the typing for me.
RANDOM MUSIC THAT I'M DIGGING HARD THIS WEEK HIPSTER EDITION! Edward Sharpe & The Magnetic Zeroes - Home Ohhhh, a commercial song.  I bet hipsters absolutely HATE it when a song on their Zune ends up in a commercial.  Way, WAY too mainstream for the tastes of a true hipster.  Also, After hearing this song I was very curious to see what these guys looked like.  I checked out a live version of the song, and I was not disappointed: 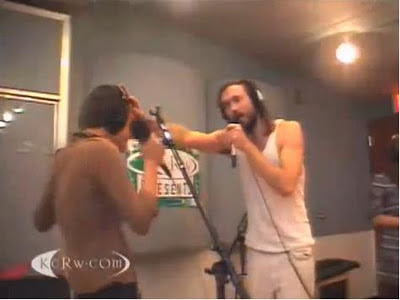 What year is this from?  I'd believe anything between 1960 and 2011.  Are these some OH's?  Original Hipsters.  More importantly: What kind of awesome drugs are these people on?  You could get away with so much cool shit back in the day.  Disregard that last sentence if this is from the last 15 years.  I'm not looking it up. 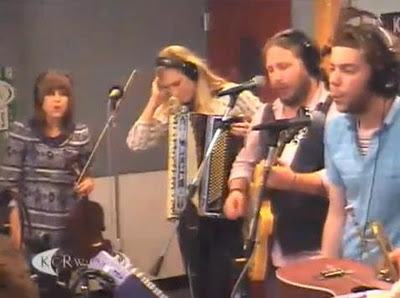 If you gave me $1,000, I still wouldn't take an accordion lesson.  That instrument only belongs in the poor deck of a cruise ship from the 1920's. PS - I still refuse to believe that the female voice in this song comes from that little short-haired chick.  I also think this is the singer: 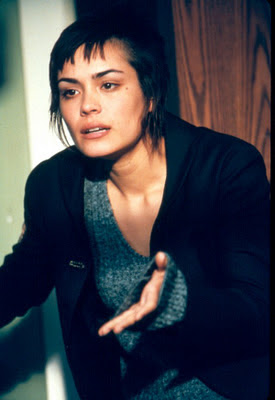 Florence + The Machine - What The Water Gave Me Plus sign in the name of the band, total hipster move.  Does @TotalHipsterMove exist?  I'm DYING to create a novelty twitter account that amasses millions of followers.  I'll start selling ad space like the Lord Voldemort account and can pretty much retire forever.  This plan is ironclad and foolproof. Death Cab for Cutie - Meet Me On The Equinox Blah blah, the song was in Twilight.  It's still a pretty sweet song, and Death Cab for Cutie is a stupidly hipsterrific band name. THIS WEEK'S GAME IN HAIKU In the driver's seat So... Penn State is riding bitch? Too soon?  Yeah, too soon. YOUTUBE The Astros are moving to the AL, and Cicero wisely linked to this video on THG.  I'm mad I didn't think of it first. This is the fastest I've seen a person bruise up in a long time.  Also, are they hanging out at school?  WTF? 2pac, resurrected.  Thug Passion.
FOOD PORN 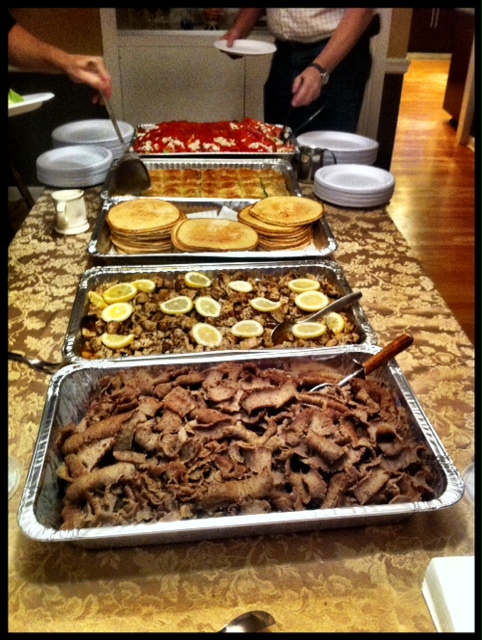 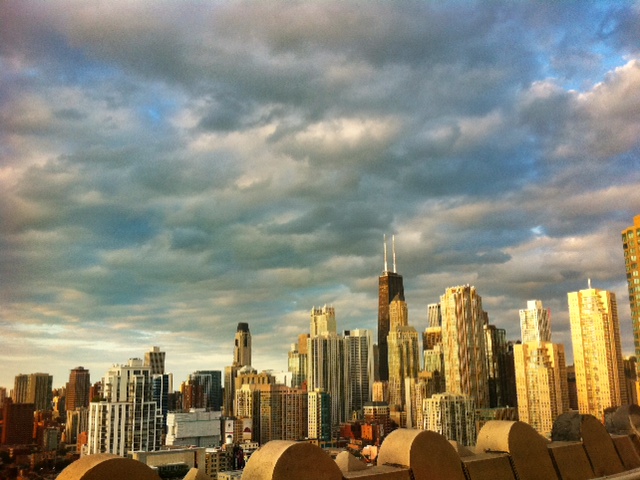 This is my view from the Mart.  I know it sucks that the sun sets before 5 now, but the flip side is that I get to see a nice little view like this with the buildings getting lit up by the setting sun.  Maybe I enjoy it more than most, but that's just me.
PREDICTION CITY We gon' do this shit.  Fo' Madden. Not really sure why that just popped into my head, but it does that quite often.  Anyway, we're not losing to these morons.  Urbana-Champaign don't scare me.  The Pick: WISCONSIN 42, ILLINOIS 14 ON WISCONSIN
Posted by Schwa at 9:48 PM