This is supposed to be a slightly abbreviated version considering there's just one meaningless game and I've been stretched thin this week.  Whether or not that holds true remains to be seen.  We're gettin' right into it this week because there are FUN things to talk about.


THINGS THAT NEVER GET OLD

There are 4 different links in the OSU line.  YOU SHOULD CLICK ON ALL OF THEM.  Seriously, it's just a great feeling.  I spent my Sunday morning eagerly looking forward to the OSU game, but with ZERO expectations.  Could we win?  Sure.  But it just didn't seem likely given how up and down this team has been this season.  Hell, we got swept by IOWA.  They haven't been relevant in decades. But once the game was underway, it was clear that the Badgers were not going to get smokeshowed like they did a year ago in Columbus.  The team came out aggressive, played unbelievable defense, and hung around long enough to deliver one final blow to win it.  We were on the ropes 2 separate times in the second half, and you know what happened each time?  We fought back:

OSU goes on an 8-2 run early in the second half to take a 6 point lead, planting that first seed of fear that things could get ugly.  Fortunately, UW responded with a 9-2 run of their own to take a 1 point lead. After the Buckeyes countered with a 9-0 spurt, the Badgers found themselves down 8, on the road, with 8 minutes to play.  THIS is how you quiet an arena: 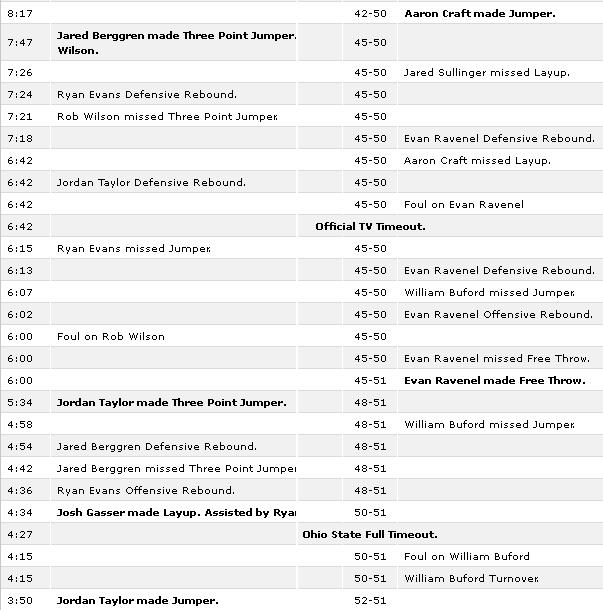 At this point, you knew the game was coming down to the wire.  Such TENACITY. Stray observations from the final 4 minutes: Like I said at the time: TASTE IT, BUCKEYES.
WHO/WHERE/WHEN 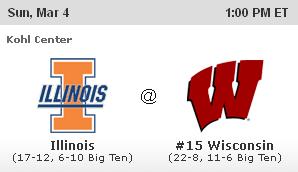 TV: BTN #realtalk, I love the Sunday noon tipoff.  Not too early that it prevents you from sleeping in... yet early enough to make you wake up and get on with your day before the dreary monotony of the work week settles in.  Plus, now that Sundays have the Walking Dead and Eastbound back, you have something to look forward to after the game.  If only the day after Sunday was like a bonus day without work.  I think I'm advocating a 3 day weekend - another in a long list of my billion dollar ideas. B1G STANDINGS (THROUGH 2/29/12) 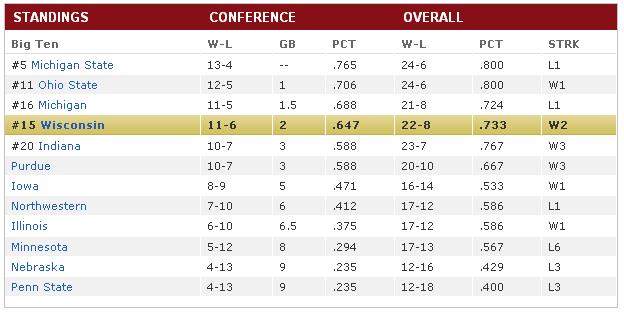 NOTES: The Badgers are guaranteed a top 4 finish in the conference for the 357th consecutive year.  Maybe it only feels like that - but since Bo took over, they've never finished lower.  That's amazing. Since we're a lock, this will also be the 14th consecutive NCAA tournament appearance for Wisconsin.  Tied for the 5th best streak in the nation.  Hopefully Texas plays themselves off the bubble so we have one less team to fight with.  Again, amazing.  I LOVE THIS SCHOOL.
PLAYERS TO WATCH WISCONSIN: ROB WILSON, ILLINOIS: BRUCE WEBER Rob Wilson, last 3 games:

THOSE NUMBERS ARE NOT SUPREMELY TERRIBLE.  In fact, they're quite good.  On a team that struggles to score and lacks guys who can attack the rim, this late season surge by Wilson makes me all warm and tingly.  I WANNA buybuybuy Rob Wilson stock, but there's still a festering pile of fear in the back of my mind that he's one terrible turnover and a foul 30' from the hoop away from getting benched.  Out of all the players I've ever watched under Bo, NONE has had a leash as short as Wilson's.  With Bruiser disappearing and Brust still trying to find his stroke, Wisco's gonna need Wilson to keep contributing. Sure, technically Bruce Weber is not a player.  But I wanted to wish him fare thee well, since without QUESTION he will be fired within 10 seconds of Illinois' final NIT game.  Since losing to UNC in the title game with Bell Self's recruits, Weber's tenure in Champaign has been nothing short of a bucket of failure.  Coaching the state school a few hours from Chicago, it's inexcusable that he could not land hot recruit after hot recruit.  Illinois should be a force in the Big Ten every year considering how much talent comes from the state, yet Weber never truly capitalized on that. And even when he DID land a good recruit, they simply never developed under his tutelage like you'd hope they would.  Truthfully, I'm sad to see him go.  As long as he was coaching Illinois, I could (for the most part) not worry about them being a true threat.  But assuming Illinois doesn't botch this hire completely, they're gonna land a pretty good coach who will surely start taking advantage of the deep talent pool in Chicago.  Ugh. PS - Not sure what makes me want to puke more: The whiny voice or the orange blazer.  DO NOT WANT. RANDOM MUSIC I'M DIGGING HARD THIS WEEK At The Drive-In - One Armed Scissor 1) You're not allowed to listen to this song unless it's turned way the fuck up. 2) Apparently they broke up, but now they're getting back together, and they're gonna play Coachella? 3) Admittedly, I don't like anything else by them. The Gaslight Anthem - The Diamond Church Street Choir I have a really hard time defining their sound, but I think I like it and this song works for me.  Part of the problem is definitely that when I hear the name of the band, all I can think of is this: 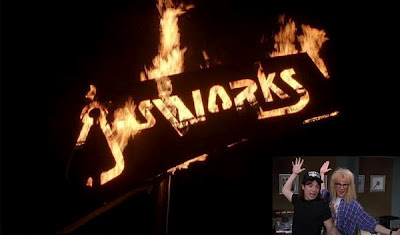 And needless to say, The Gaslight Anthem would have a TOUGH time getting a gig at Gasworks. The Offspring - Americana The Offspring is one of those bands that I think I like, but I'm pretty sure I don't care enough to call myself a fan.  Don't matter, I enjoy this song.
THIS WEEK'S GAME IN HAIKU No excuse to lose Weber's seat is pretty hot This won't help his case YOUTUBE Score one for the internet: Pulp Fiction - SHAKESPEARE STYLE.  Iambic pentameter.  1500's.  Genius. PS -

Behold the mighty mind of Brentanius!

Killed me.
Not sure what's going on here, but I do know that it's super nerdy... and I'm strangely entertained. Have I ever posted this before?  This NEEDS to be my Halloween costume.  I will pay millions for it. PS - First thing I thought of when I checked the comments: 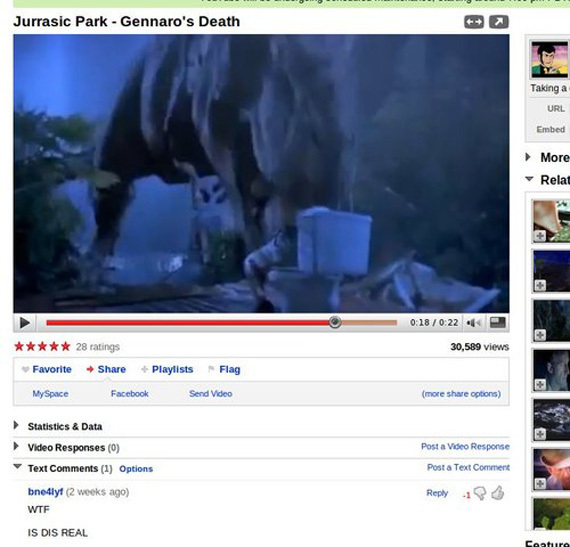 IAN'S WRIGLEYVILLE IS NO MORE... AND I'M GONNA GET TO THE BOTTOM OF THIS Sitting at home Monday night, I noticed a strange tweet pop up.  It was from an account called @DimosWrigley - odd, considering I don't recall following any place named Dimo's.  They were talking about changing their name.  Oh well.  But then I realized it was in my 'Friends' group... and there's only ONE pizza place I consider a true friend of mine.  I nervously clicked on the picture in their tweet to get the story behind this bizarre news: 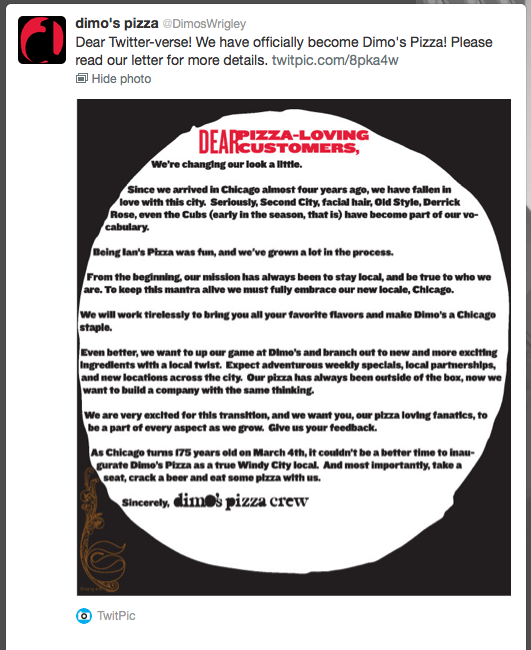 WTF?  So... Ian's is just vanishing overnight?  Does this make any sense?  Obviously they're doing fine financially - the place is always packed at night.  So what gives?  I was quickly assured that the pizza (and ranch) were not changing at all, but they were no longer going to be called Ian's. So.  Confusing. And should I be bothered by this?  Once they told me the pizza (and ranch) weren't changing, I didn't really care.  But then I started thinking about it, and it really doesn't sit right.  Since I'm such an intrepid investigator, I put in a few calls to my sources*.  Here's what I've learned: Unfortunately, I was not privy to ALL of the details, but this is the gist of it.  Gonna take some time to process all of this. Meanwhile, is this now a collector's item? 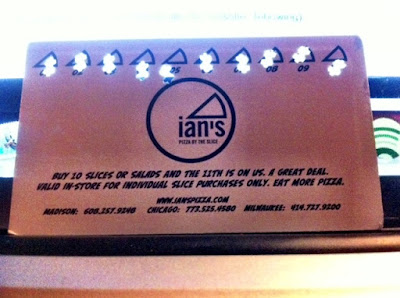 I can't use it, right?  It's definitely worth more than $3.75.  These are dark days in my life. *You're damn right I have Ian's sources.  I AM THE REAL MR. OCTOBER. ONE OF MY IDIOTIC PREDICTIONS CAME TRUE AND I WANT YOU TO APPRECIATE THIS It was big news the other day that some nerdbox proposed to his girlfriend via the internet.  Essentially, it started with a bunch of goofy pictures and then grew into a widespread hashtag on Twitter: #SayYesKatie.  First ever hashtag proposal?  I think so.  BUT THIS CAT SAW IT COMIN' MONTHS AGO:

I've seen a lot of people say stuff like, 'If you're hashtagging on Facebook, you're an idiot.'  That's ridiculous.  I LOVE hashtaggin', and do it very frequently in my tweets.  I've also begun incorporating it into gchat and text messages.  I'm about to hashtag the shit out of this mailbag.  #justwentthere.  What's so wrong with that?  It's just a matter of time until a guy proposes via hashtag, or the Pope gives a speech with hashtags, or an NCAA coach molests a child via hashtag.

The bottom line is that I'm clearly on the forefront of both technology and romance.  And those two disciplines are RARELY combined.  If my YouTube app comes out in the next 6 months, I will safely assume my ideas are actually amazing and I need to start PROFITING from them. 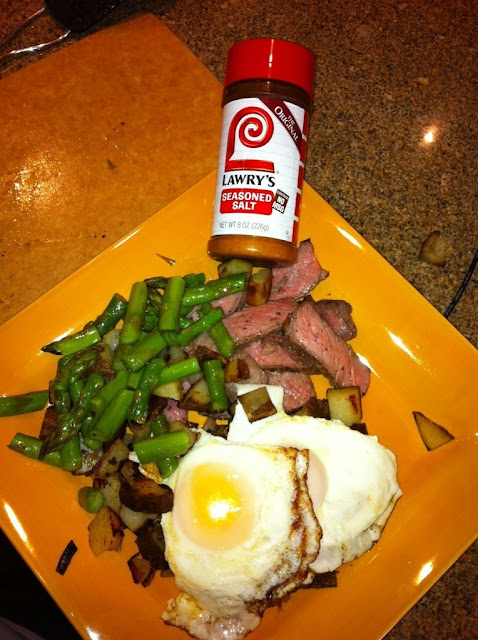 Steak, eggs and LAWRY'S.  I've written about it before, so I won't bore you with the details.  But Lawry's is everything I love in life.  It goes well on litrally anything - including both steak AND eggs.  Also, I guess my dad decided to start eating like a king for breakfast.  Seems unfair.

THE RIFKINS GOT A NEW PUPPY.  INTRODUCING: STELLA 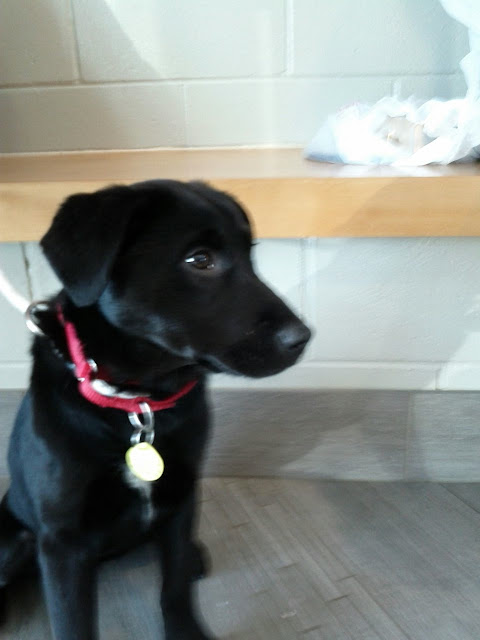 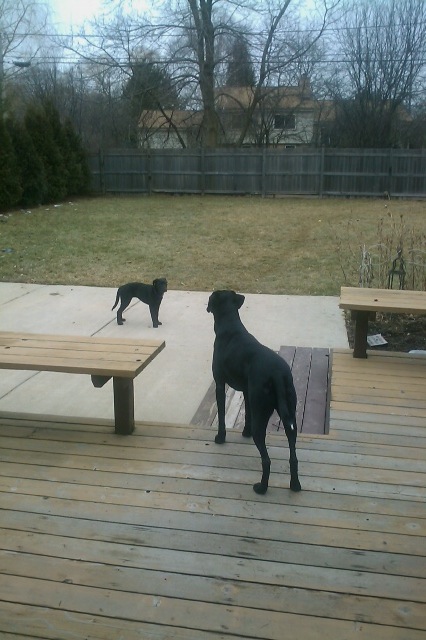 All together now: AWWWWWWWWWW.  She is ADORABLE and it kills me that I'm sitting here in Chicago while she's running around my house in Milwaukee.

And yes, the name was inspired by this.  We're huge Seinfeld fans.

Senior day against a team with a lame duck coach and nothing to play for?  I'MA GO OUT ON A LIMB WITH THIS ONE.  The Pick:


ON WISCONSIN
Posted by Schwa at 8:54 PM