MADISON, WE HAVE A PROBLEM:

MONTEE BALL BLOCKED ME ON TWITTER! I am fucking DEVASTATED. If you can't tell from the amount of caps lock I'm throwing in you grill right off the bat, this is a big deal. Might be time for another BADGER PREVIEW INVESTIGATION:

Sunday night I was watching that traveshamockery of a football game when I saw someone retweet Monteé. Odd, I thought, since I didn't see his original tweet in my feed. So I clicked on his profile, hit the 'follow' button, and was slapped with the cold, hard reality up above. Monteé Ball - one of my favorite Badgers - personally blocked me on Twitter.

As cool as I am, Monteé never followed me on Twitter. So what led him to block me?

Maybe I tweeted something negative about him. To test out that possibility, I used the ever-handy All My Tweets to check out my last 3,000ish tweets (insert your own joke about how that should cover the last 2 weeks). Here are all the mentions I've made of @M_Ball28:


So there ya go. Calling him one of my favorite Badgers, defending him when he was getting slammed for the fight, and heaping praise. I think we can safely rule out any form of Twitter bashing as the cause of him blocking me. That really leaves only one other possibility:

Or one of his friends did and let him know about it. Yeah, I poked fun at him adding the accent to his name and aired my frustration over our lack of success running the ball. But I can guarantee he's heard a thousand worse things said about him after games. So I'm not sure if I should feel awesome because Monteé Ball may have read my Preview... or crushed because he hates me as a result of it.

Regardless, I'll continue to root for Monteé because I still think he's an awesome Badger. I just wish we could sit down over a couple Gatorades and clear the air. Womp womp.

PS - Is it bad that I actually was a legit little sad over this? Stung my Badger pride.

CHICAGO BADGERS: Will's is still the best place to watch a Badger game as far as I'm concerned, so might as well go for a 5th week in a row.

SHAMELESS SELF-PROMOTION: I lied last week. I will actually be doing a HuffPo Live college football roundtable discussion thingy TONIGHT at 8:40 pm CST. Head over to HuffPo Live as I do everything in my power not to act a fool.

SHAMELESS PLUG #2: The better half of Statesider 302A will be taking control of ESPN980 this Saturday from 11 am - 3 pm CST. Give it a listen at ESPN980.com. He knows more about sports and less about cheese than you could ever imagine. You just might learn something. 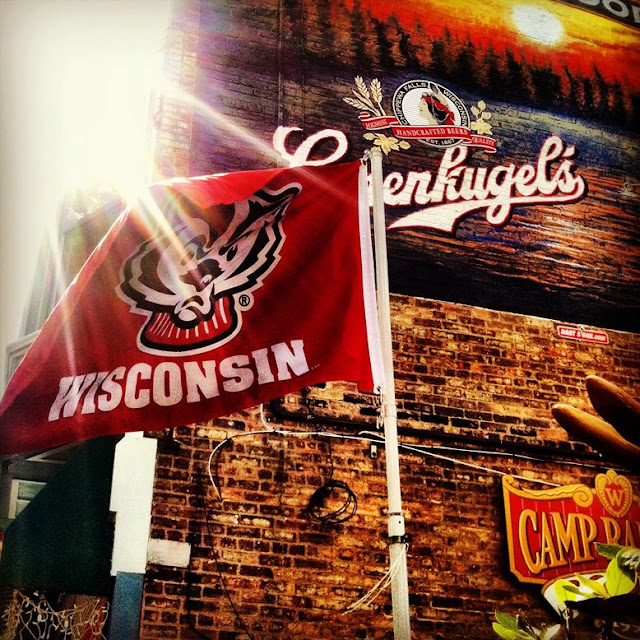 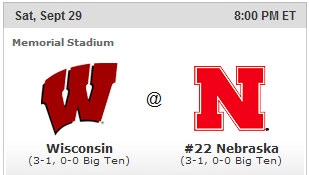 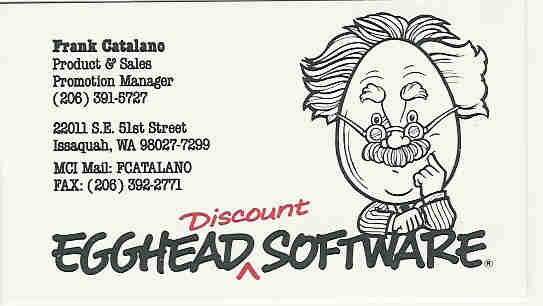 You don't understand: I was genuinely terrified of Mr. Egghead when I was a kid. If I had to choose between a million clowns or Mr. Egghead, I'd take the clowns a thousand times out of a thousand. I bet my parents are reading this and laughing their asses off because not only do they know how true this is, but they used to TORTURE me with Mr. Egghead. Fuck that egg. 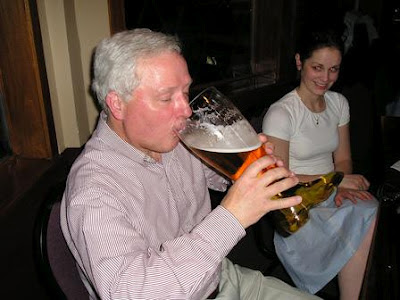 DAS BOOT! Old guy doing a boot! For some reason, drinking beer out of a giant glass boot just makes so much sense. Like, why wouldn't you be passing a giant glass boot full of beer around in a circle until it's gone? Added bonus: Essen Haus has some absolutely delicious beers - making it a nice change of pace from the incessant Natty Light consumption that takes place every other night. For my group, a trip to Essen Haus was like a field trip: once or twice a year, we'd all mount up and make our way out there (always felt like it was in Verona, I guess it's actually not that far) to smash boots for hours.

While Essen Haus is the Mecca of booting, doing it at home is just as fun. Especially considering you can really spice it up and do boots with whatever you want. Like wop. That's one of those ideas where before you pour it, it's all 'YEAH LET'S TOTALLY DO A BOOT OF WOP THIS WILL BE AMAZING'. And then 3 seconds into your first turn you quickly realize: 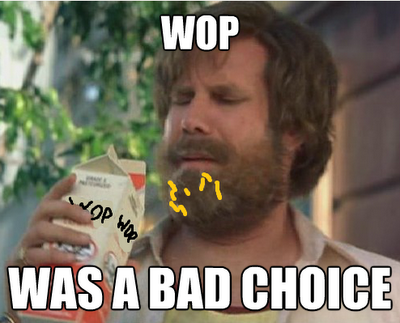 But I swear it was a good idea at the time.

PS - What were the odds that I got through this entire section without linking this video? 3%? 2%?

PPPS - Laughing a little too hard at my desk to that clip. No biggie.

9) I Think It's A Long Island, But Whatever Comes In The Mason Jar at Red Shed
10) Orange Halloween Wop
11) Three Story Beer Bongs On Dayton Street
12) Mountain Creek Power Hour

My Lifelong Defeat In Raffles vs. The Will's Halftime Raffle

I have never won a damn thing in a raffle. Or a lottery. Or anything like that. The worst part? I continually participate in these things thinking, 'I am FOR SURE gonna win a Wisconsin dog leash today, lock it up, championship!' And then, of course, the Wisconsin dog leash comes and I don't win and I JUST DON'T GET IT. I was supposed to win it today! I actually hate anyone who's ever won anything in a raffle. It must be the best feeling getting your number called, and the announcer keeps saying, '3-4-8, does anyone have ticket # 3-4-8?' and you start shoving women and children over to get to the bar in time and then you hear the magical words, 'Looks like we have a winner from upstairs!' YOU'RE DAMN RIGHT WE HAVE A WINNER FROM UPSTAIRS, WHERE'S MY DOG LEASH?* I'm not 100% sure, but I'm pretty damn sure this is the week where I finally chalk one up in the 'W' column. I'm winning a raffle item at halftime at Will's. Believe that.

*Don't even have a dog right now.

I don't trust Nebraska fans. They have literally nothing else to do but drink, eat and root for Nebraska football. They don't have pro sports teams. They don't have rugged terrain to traverse. They don't have minorities. It's litrally just a bunch of white people drinking beer with too much corn syrup in it while revolving their lives around their 6-7 'Husker home games every year. That's it. I've been to Omaha, and let me tell you: Good steaks, homogenous population, LITTLE TO DO. Once you factor in that we embarrassed them in their first Big Ten game last year, it's pretty damn clear that the fans will be fired up Saturday night. And that's where Stave will be making his first collegiate road start. Ideal? Not by any means. But it's an exciting challenge for the freshman to take on, and I'm pretty stoked to see how he does. He'll probably get sacked 14 times and throw 9 interceptions, but the kid's gotta learn sometime. All eyes on you, Sunshine.

Mumford & Sons - Below My Feet

I heard this song for the first time when they played it on SNL and immediately liked it. Big part of that? They used an electric guitar! Have they ever done that before? I really don't think so. And it may be a little risky for them, but in no ways was it overpowering. So, good job evolving your sound a little... because the rest of the album is pretty much exactly the same as your older stuff.  That's not necessarily a bad thing, it just doesn't have any tracks as good as White Blank Page or The Cave. I'd give Babel a solid B. #pitchforked

I guess Monday was the 21st anniversary of Nevermind, which is a little insane. I was watching Back and Forth (Foo Fighters documentary) the other day and it starts off with a brief history of Nirvana. Man, it's a fucking crime that we lost Cobain when he was 27 years old. Suicide's a bitch.

(The transition from Mumford to Nirvana is like when the bobsled team in Cool Runnings flies from Jamaica to Canada and they step outside for the first time. COULD BE SMOOTHER.)

Just to make sure we cover just about every end of the spectrum (wait, are there only 2 ends to a spectrum? Can my music spectrum have three ends?). My perception of my boss changed the day she walked by and heard me listening to some Bob and said, 'Brandon! I didn't know you liked Bob Marley! This changes EVERYTHING!'

Done with the cupcakes

Buckle up, it's Big Ten time


Following up from last week, and more relevant than ever... I WANT TO BE ED HOCHULI.

I think at some point in life I'm supposed to not be impressed with these videos anymore. I just haven't reached that point. Four things:
PS - Burn notice:

I'm far too much of a coward to do real drugs like LSD, but this guy apparently gets paid to try drugs on a Dutch TV show. I kinda lost my shit when he was playing with the PS3 controller and just endlessly scrolling through the menu because he thought he was controlling the wall. 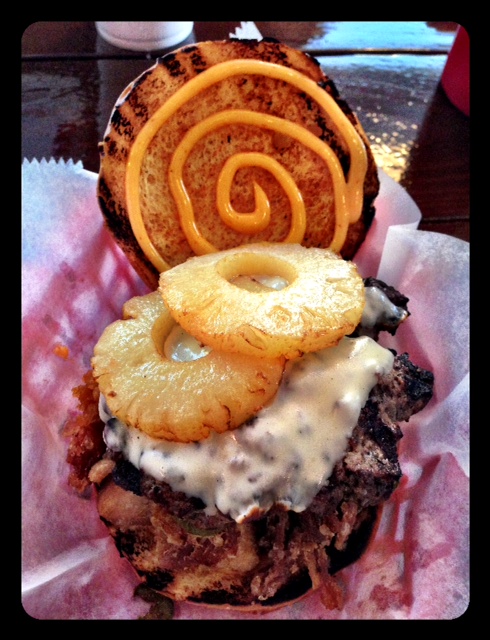 Finally got a chance to try Big & Little's (of Guy Fieri DDD fame). Holy shit, that place does not disappoint. I got the Pastor Burger: A fantastic piece of meat sandwiched between fried pork belly/jalapeños on the bottom, and two types of cheese/PINEAPPLE on the top. I interpreted it like the pork and pineapple were in this struggle competing for taste supremacy, but the burger was playing Switzerland and staying neutral. In the end, the pork and pineapple didn't realize that their struggle was just making the perfect mixture of savory and sweet flavors. I'm talking about a burger, right?

Their fries are dank as well, and I'm happy to report that they proudly serve Merkt's cheddar cheese for dipping. These guys might contend for my top 5 cheese fry list in the near future. All in all, an AWESOME meal. 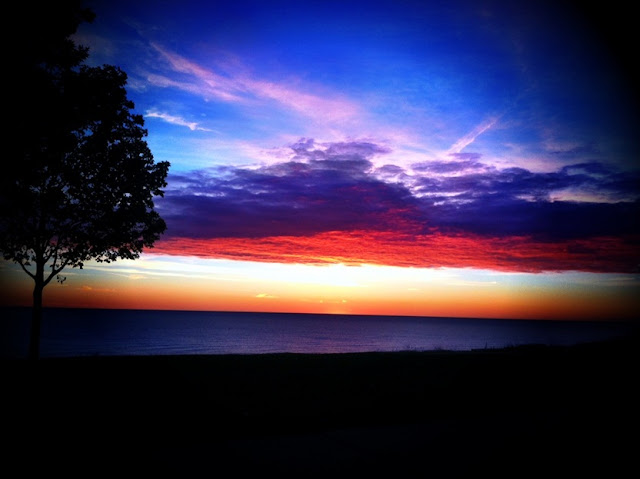 My boy took this pic and sent it to me, but I had to touch it up a bit first. Gotta bring out those true pinks and blues in a sunset shot.

Sunset over Chicago, looking North from the Mart. I have to say: the panorama feature they added to iOS 6 is fantastic. I've been taking panoramas with an app I bought for a few years now, but it's a bit of a pain in the ass, and it's too easy for there to be blurry/ghosting issues. But Apple's take on it is super smooth and very impressive.

LOOK AT THIS FUCKING HIPSTER/FASHION TALK 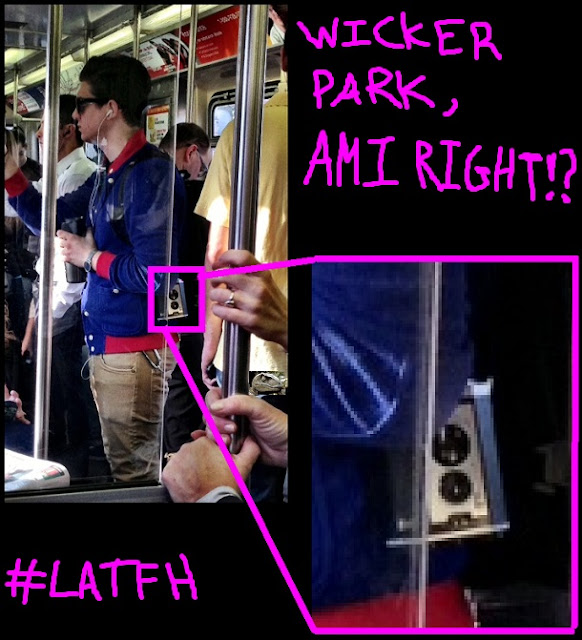 I probably wouldn't have iPhone Ninja'd just for the jacket he was wearing, but then I saw the old school camera he was toting around and my Hipster Alarm started going off full blast. I can guarantee right now that at some point in his life he's said to a person 'Yeah, I mean, I take Instagram pictures without even using the Instagram app. That shit's gone mainstream.' Instead, he just lugs around his grandpa's camera to try and pick up chicks at Big Star. I'm on to your bullshit, you fucking hipster. 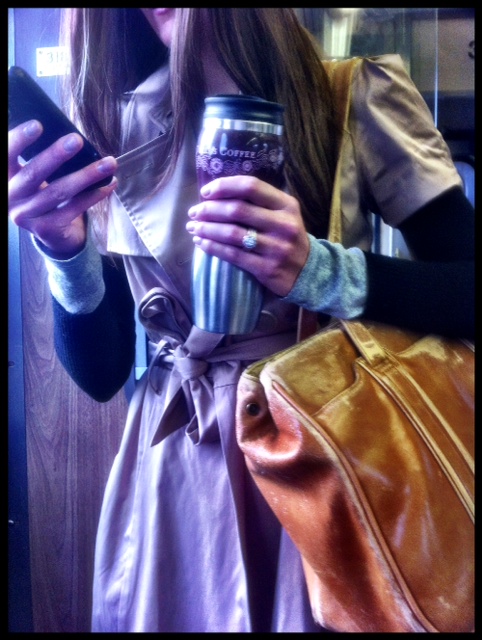 I'm always taking a bit of a risk when I criticize a girl's outfit here because there's a decent chance one of the girls reading this has something similar. If so, please clarify: What the fuck am I looking at? Is that a short-sleeve Mafiosa Trench Coat? Because from where I was standing (TWO FEET IN FRONT OF HER), it sure as hell looked like a short-sleeve trench coat. Maybe she only busts it out in pseudo-Fall, still kinda Summery weather. I can't imagine it offers much protection and warmth once shit gets REAL out here.

We're not winning this game. THE PICK:

ON WISCONSIN
Posted by Schwa at 4:44 PM