I'm a little offended at how possible it still is for UW to make the B1G Championship game. This team has been nothing short of HORRENDOUS all year, and yet, as we enter October, a trip to Indy really wouldn't be all that surprising. True - that loss to Nebraska really sucked given how perfect of a start we got off to. But they're not in our division. And that's why these next few weeks are so important. Illinois has looked absolutely terrible this year, and with the game being played at Camp Randall, you can officially dub this one a MUST WIN SITUATION*. I'll promise you right now that if we lose this week, there's no way this team finishes over .500. It's just not possible. Wait, have I mentioned how bad Illinois is? They gave up 52 points... at home... to Louisiana Tech! Things didn't get any better last week when Penn State rolled into Champaign and completely handled the Illini. I guess what I'm trying to say is that if a B1G team comes into Madison as a two touchdown underdog given how abysmal the season has gone so far for Wisconsin, then you know they're really fucking bad.

*Calling a game a 'must-win' is among the dumber things in life that I fully endorse. I can't even begin to tell you how many must-win games my teams have lost and still recovered from. 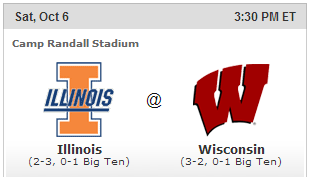 TV: ABC OR ESPN2, WHO KNOWS, WHO CARES
WEATHER: HOPEFULLY A HURRICANE TO PUT US ALL OUT OF OUR MISERY (JK, 40'S AND SUNNY, SPLENDID)

I CAN'T BELIEVE I ALMOST WENT TO ILLINOIS. THIS SCHOOL SUCKS.

I know usually I point out how many awesome famous alumni our opponents have. But that's a tall order with Illinois. TAKE A LOOK:

Whenever I'm looking over those final bills, I fully expect to see rust proofing and an additional overcharge on there for good measure. Gross.

It's obvious the person who wrote the wiki on pimping has never actually done any pimpin'. Also, I like to think that having an MBA as a pimp is a little like having a culinary degree while working the deep fryer at McDonald's. Maybe you could do a little better given your qualifications?

*Some people at work were talking about a girl who used to work here, and they mentioned that it looked like she had a Bumpit in her hair all the time. SO TRUE. And I forgot all about Bumpits! What a remarkably terrible idea. Do the girls really look better in the 'after' shots? 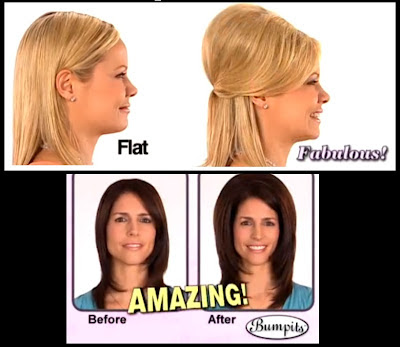 Hmmm. I suppose it's a bit closer of a call than I realized. Let's consult the only true expert... 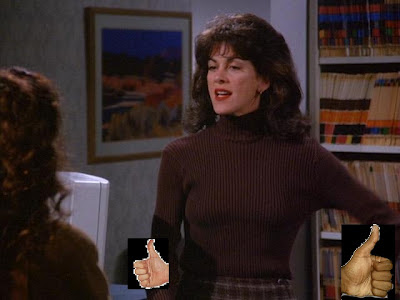 DELICATE GENIUS APPROVES. This is the point where anyone who doesn't watch Seinfeld is thinking, 'is he on drugs?'  MAYBE.
(I'm actually rather curious if any of the girls reading this have used Bumpits before. Stories/emails would be appreciated.)

7) Literally Anything from Monday's.

If you're gonna do only one thing, you better do it damn well. And Monday's has totally embraced that mindset. It simply does not matter what you order there: it's going to have a lot of alcohol in it, and it's going to be cheap. If you can disregard for a moment that the place smells like fresh vomit and is somehow either completely empty or absolutely swamped, then you're for sure gonna have a good, soon-to-be-blacked out time. It's really a below-average bar that figured out the key to longevity* in the crowded Madison bar scene. Students wanna get wasted as quickly as they can, and they wanna do so for as little money as humanly possible. This is the ONLY reason Monday's is still open for business, and you gotta respect the hell out of that.

But don't just take it from me. Here's what the #YelpMachine has to say about Monday's: 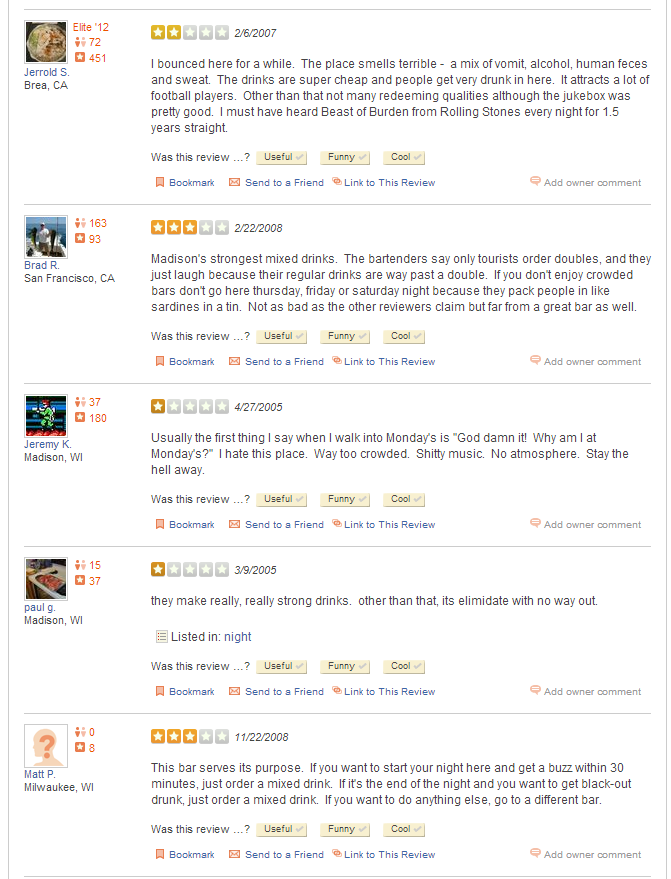 That's a wonderfully accurate group of reviews. I don't think I found a single thing I disagreed with. Isn't Yelp just the greatest when they're not shaking down local businesses and shadily hiding/promoting specific reviews?

*I'm not the only one who thinks 'longetivity' is a word, am I? Flabbergasted at my desk to learn that I'm really looking for 'longevity'. And I don't flabbergast very easily.

I sense dissension in the ranks. Based on the whispers I'm hearing, Bielema is firmly pro-DOB, while Canada is Stave's biggest fan. THAT IS NOT GOOD. If the head coach and the offensive coordinator aren't on the same page, do you know what you get? You get a team bringing in a quarterback to run the 2 minute drill on the road down 3 after sitting on the bench all day. That's what you get. And that is NO BUENO.  Listen, you know I love Wisconsin. And I like Bielema. But the Canada hiring is really starting to worry me. I never understood why they went with a guy with a spread background, but if he was able to score points in bunches at Indiana and Northern Illinois, it was only safe to assume he could do it with the horses we have at UW. 5 games in, however, and things are still not even close to clicking. There IS talent on the offensive side of the ball, but terrible play calling and indecisiveness at the top are really capping this team's potential. FIGURE IT OUT.

This is a lot closer than most people realize. A big part of that is that there are so many factors involved. The only way I know how to decide? PROS AND CONS:

VERDICT: In a shocker, I'm going with SQUARES as the ultimate pizza slice. It's possible I'm biased because two of my favorite pizzas (Calderone Club in Milwaukee and Barnaby's in Chicago) have mind-blowingly good thin crust pizza that's cut into squares.

DISCLAIMER: Deep dish pizza kinda throws off this entire game. Has anyone EVER had deep dish cut into squares? I feel like those will be served with toothpicks in them at my wedding. Act like you wouldn't assault the server out of sheer excitement if they came out of the kitchen with a tray of Lou Mal's cut into toothpicked squares. Is this a thing? Can I trademark it and slap a #MillionDollarIdea label on it?

Speaking of which, I had a #BillionDollarIdea yesterday: Customized yoga mats with Instagram pictures on them. You will NEVER guess what the target audience is here. But I don't see yoga going anywhere anytime soon, and Instagram, well, I'll get to them later. I'm in my first round of financing for this project and I really think it's got some LEGS. Potential name: Yogagram. Oooo, I'm not the first to coin that term, and of course it comes from Pinterest. Don't you think my #skyporn collection would make for unreal yoga mats? This is by far the most logical of my many ideas.

Newest single from them and I really like it. Unfortunately, the rest of their album came out and it's HORRIBLE. They're coming to Chicago next month and I can't wait to see them because they're so much damn fun live. But this new album has somewhat tempered my expectations. Didn't enjoy a single song after 'Let's Go'.

I guess the fact that I enjoy this song is really proof positive that I can ignore the lyrics of a song and still really like it:

Morbid much? Unless there's some deeper meaning here that completely escapes me because interpreting song lyrics is something I do not do at an above average level. Like catching tater tots in my mouth. So, so good at that.

Always appreciate a black jew that can shred a guitar. I know I'm supposed to capitalize 'jew' there, but I feel like that would be disrespectful to the black part of him since that is NOT capitalized. I respect all races and religions. Except Mormonism and Scientology.

This team has broken my heart

Is it next year yet?

This 5 year old kid doing commentary while mountain biking with his dad is fucking ADORABLE. And what an awesome dad he is.

I just got so nostalgic about Land Before Time that it's a little unsettling. WHY DID I JUST WATCH THE SCENE WHERE LITTLEFOOT'S MOM DIES. I refuse to link to it because no one should watch something so sad.

On the complete opposite end of the spectrum, this might be my favorite COPS video ever. Legitimate tears of joy while watching it.

OK, fine, one more: This can be the runner-up for best COPS video. Also:

Finally, in light of butt chugging somehow working its way into my Twitter feed all the damn time these last few weeks, I feel compelled to link to the original butt chug. The camera guy geeking out and Bam butt plunging him make the video. 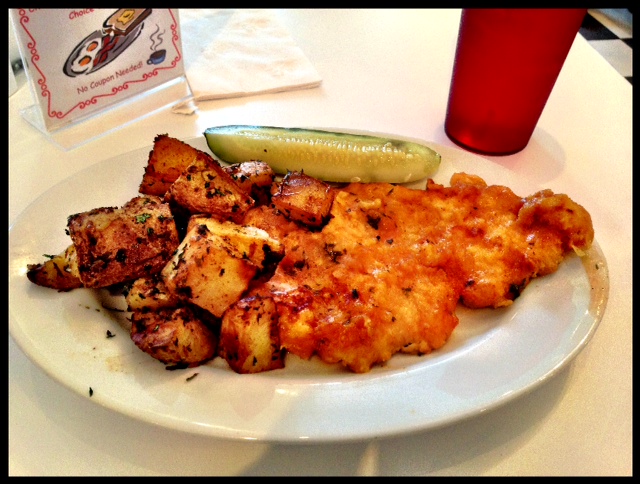 Lemon chicken and roasted potatoes from Steve's Deli. That place doesn't fuck around. How do you find such big breasted chickens? Do they just pound the breast so it gets real thin like that? Either way, delicious and I want more.

My roommate sent me this pano he took of a sunset in Atlanta. My initial thoughts were that it was pretty badass, and it would look SIGNIFICANTLY better if taken with an iPhone instead of some bogus Android phone. #iphoneelitist

PS - You really wanna tell me you wouldn't love practicing your Downward Dog at Core Power Yoga with this on your mat? Bullshit. You and I BOTH know you'd buy that yoga mat in a heartbeat. I'll sell them exclusively at LuLu Lemon outlets. This is the best fucking idea ever in the history of the world since stuffed crust pizza.

I CAVED AND JOINED INSTAGRAM. LET'S TALK ABOUT IT.

Let me start by saying this: I think Instagram is pretty cool. The idea makes a lot of sense. I just think the execution is pretty poor. It's possible that I'm in the minority on that view, since it's a shockingly popular service and Facebook paid more than the Middle East's GNP to buy it. But a few things really bother me:
So there ya go. It's cool, and I'll keep playing around with it, but it could be a lot better.

PS - Step aside grocery store, out of the way Borders, I think we've found the new #1 place to meet girls: 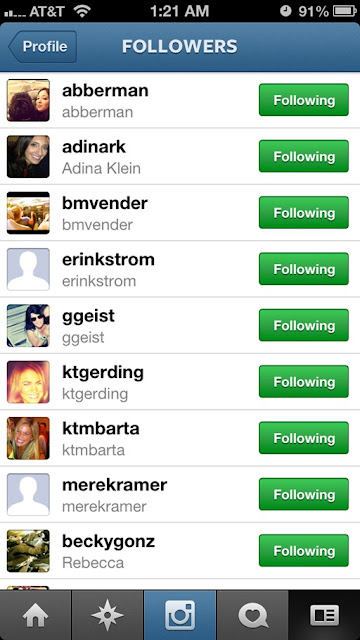 Took me a week to get ONE male follower. Not that I'm complaining.