That's about all I can say about this team and what they've been doing all season. The UNC game was a blast - Will's was bumpin', UNC gave us their best shot, and we still rolled out of there on top.

The Arizona game was something truly fantastic. I watched it at a tiny Badger bar in San Francisco and you could not move in there. Just a little pocket of Badger freaks surrounded in all directions by hipsters and venture capitalists. Didn't stop us from guzzling Miller Lites and freaking out after every Dekker bomb. That last one? The dagger?

Brought me so much joy. Like a lot of people, I've had sky high expectations for Dekker since he committed. There have been some ups and downs, and he's had the shortest Bo leash I've ever seen, but it all pays off with performances like this. The kid has been CRUSHING it in the tournament. Anytime Frank drops 29 and 6 and isn't the best player on the floor is a good time to be alive.

With that win, the matchup the world has been waiting for finally arrives: Wisconsin vs. Kentucky. Revenge vs. The Streak (I'm making these names up). Can UW avenge last year's crushing defeat? Will Kentucky go 40-0? I think you know what I'm rooting for, but how about the entire country? 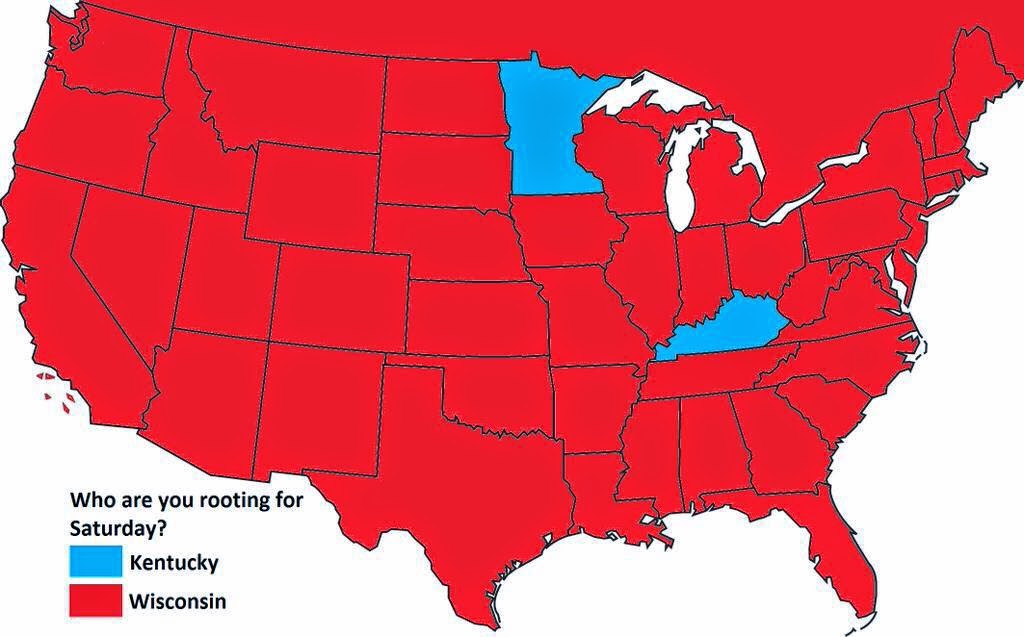 I love you, Minnesota. Don't ever change.

PS - No need to dig into UK - we covered them extensively last year. Let's skip all the cute stuff and move on.


Big things happening in Madison these days. And in a BADGER PREVIEW EXCLUSIVE, I have footage from the incident:


CHICAGO BADGERS: Get to Will's early. Don't show up an hour before tip and wonder why there's a line. The bar is going to be absolutely packed to the brim. It's going to be bananas in there. 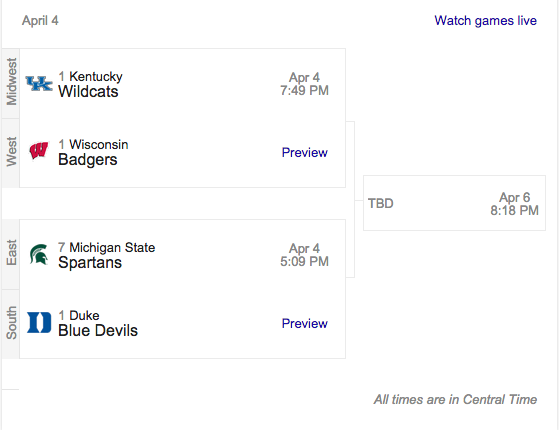 (1) Wisconsin
Opponents: Kentucky, Duke/Michigan State
Undefeated Chances: 20%
All they care about is their #SuckOffs:

STOP BEING SO AMAZING AND LIKABLE. Why must this season ever end? If IF it ends with magic, I'll still be depressed knowing that we will never see a more fun and talented and incredible group of guys repping UW.

PS - A #SuckOff is either when the two worst players battle or when one player picks Kirby and inhales a player and throws him off the edge. I'm afraid to do any further googling. Playing as Kirby sounds like dumping proximity mines everywhere in GoldenEye and just waiting for people to walk into them. No one likes that person.

(7) Michigan State
Opponents: Duke, Kentucky/Wisconsin
Undefeated Chances: 15%
Another Final Four for Izzo: the man is a freak. I hate how much I respect him.

(4) Maryland
Death via: (5) West Virginia
Wrastlemania was fucking awesome: seriously. The day started with an all you can eat and drink dim sum brunch (I wasn't aware this was a thing). I'm moderately embarrassed at the amount of food I ate. After that, I mixed up a fresh batch of Gatorage and we hopped in an SUV to drive to Santa Clara. 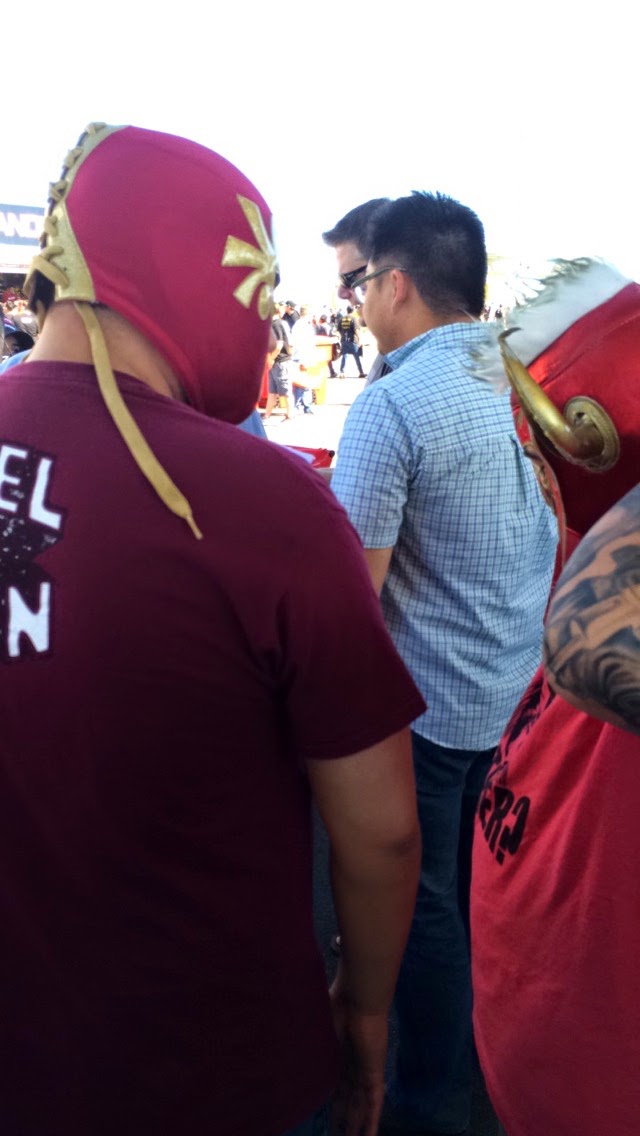 When they finally got up to the security people, they were asked to take their masks off. The one on the left just screams 'I WILL NEVER REVEAL MY IDENTITY!!!!'

This was my first hint that wrestling fans are WEIRD.

(9) Purdue
Death via: (8) Cincinnati
I should mention that it was 80 degrees and sunny: kinda reminded me of those fall football games in Madison when it's hot as balls and there's nowhere to hide from the sun. I borrowed sunscreen from a nice Mexican family that found me hilarious. It is possible I was quite drunk when I approached them.

(10) Ohio State
Death via: (2) Arizona
I got to see the Undertaker win a match at Wrestlemania with my real eyes: that alone was probably worth the price of admission. He's been one of my top 3 favorite wrastlers forever (Stone Cold is up there, and the third varies depending on how I feel). His Wrastlemania dominance is second to none. So yeah, I was very, very happy.

PS - Only thing that sucked about the whole thing was that it happened during the daytime in an outdoor stadium. WWE is all about pyrotechnics and controlling the lighting/lightning. That shit is SO much cooler when you're indoors and the lights go down. The Undertaker isn't a vampire, but he definitely shouldn't be seen in the sunlight. That's just wrong. 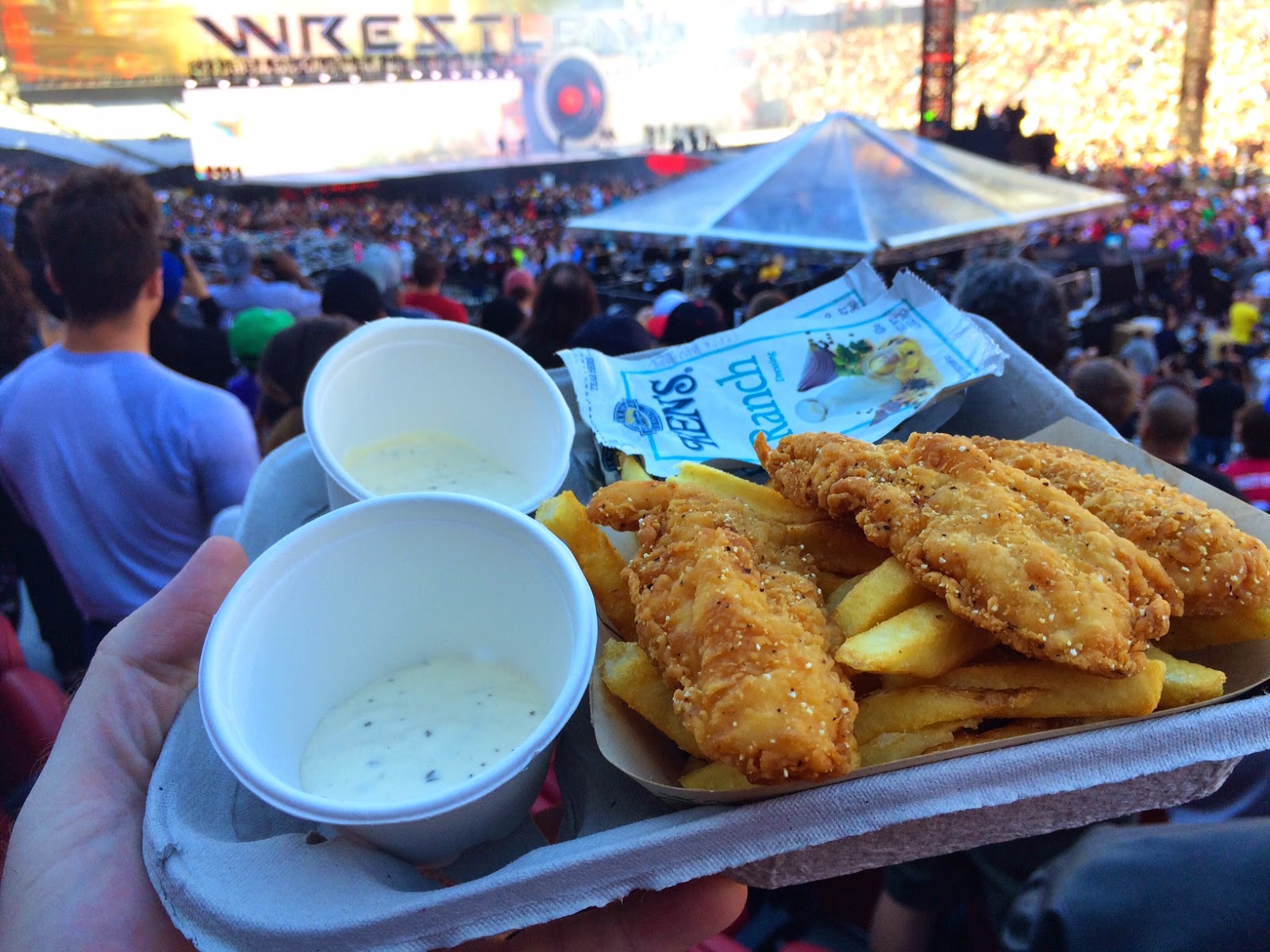 (3) Illinois
Death via: (6) Alabama
I imagine it's insanely frustrating being an Illinois fan these days: it's been TEN YEARS since this happened. And since then, Illinois has... done nothing? Maybe they have. I don't know. I just know that a giant state school with a rich hoops tradition in a talent-filled state should not be as crappy as these guys are.

Michigan
Postseason Status: Still dead
My laptop is EXTREMELY hot in my lap right now: I am making a sacrifice for you.

Northwestern
Postseason Status: Still dead
My co-worker went to Northwestern for undergrad AND his MBA: so for April Fool's I unplugged his mouse and then put a piece of scotch tape over the sensor on the bottom. When I came into work today, I found him like this: 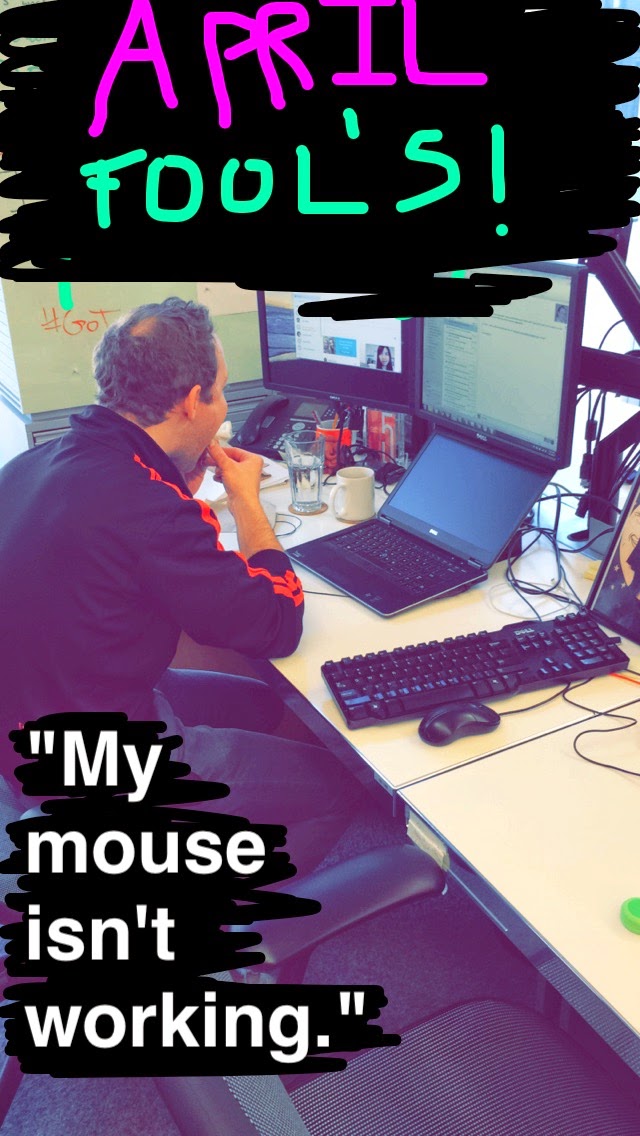 PS - If you're into jazz you should check him out. He rips a wicked sax.

PPS - April Fool's sucks. That's why I stick to something simple. The people that do elaborate hoaxes or fake news announcements are terrible and should be locked up.

Nebraska
Postseason Status: Still dead
Better Call Saul is fantastic: if you're not watching it, you should fix that part of your life. Thoroughly enjoyable, and I'm guessing even the non-Breaking Bad watchers could enjoy it. But if you didn't watch Breaking Bad and you're watching Saul then you need your soul examined. 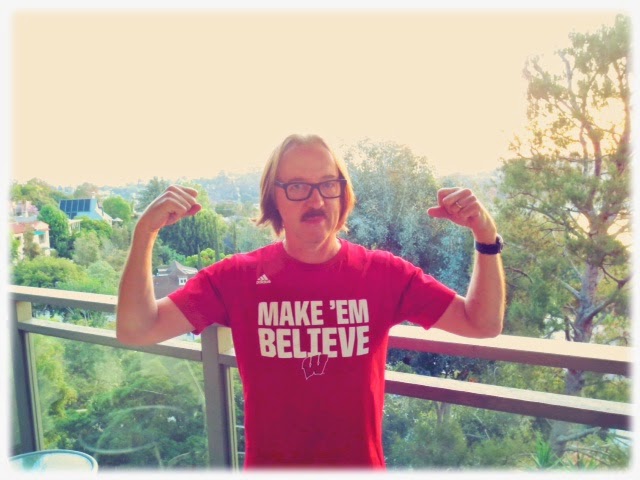 Minnesota
Postseason Status: Still dead
No site has more EARTH SHATTERING redesigns than ESPN: every single time they change up ESPN.com my world turns upside down. But you know what? You ALWAYS get used to it after a few days. And this time, I actually happen to like the new look.

Penn State
Postseason Status: Still dead
The Kuma's Too Burger of the Month for April is a world ender:

In honor of a new Modest Mouse album being released we play an old MM deeeeeep cut. If the badgers lose put this on repeat but no jumping off the Golden Gate. I don't want to see you in our daily blotter. If they win get shit nasty drunk and ride off in the sunset, genitalia in hand. (JQW)


I've never heard of Bankroll Fresh, but T.I. goes in on this hot beat, so feel free to fast forward to 1:40 and bump it. (@DannyGoldin)


Busting out the big guns. No matter what happens this weekend, this was the most fun team I've ever rooted for at Wisconsin. And maybe in any sport. Belt it out, Whitney. The love is real.

Revenge on the brain

Still one more trophy to grab

LET'S FUCKING DO THIS

This is a monkey playing with puppies. How the fuck does a monkey have multiple puppies and I can't even have ONE.

PS - That monkey has the hairline of a 35 year old man with unfortunate genetics.

I may need to add messing up on live TV to my scary list fear rankings. There's nowhere to hide. There's no redo. You just pull a hangar out of your suit and feel like an idiot.


I feel like grandma was about to get all 'JACK YOU DINGALING' on the kid here and the video just abruptly cuts off. Hmph.

PS - My little brother actually did the exact same thing when he was younger and my dad had to sit there and stare at monitors with gunshot wounds permanently embedded on the screens. My dad did not enjoy this. 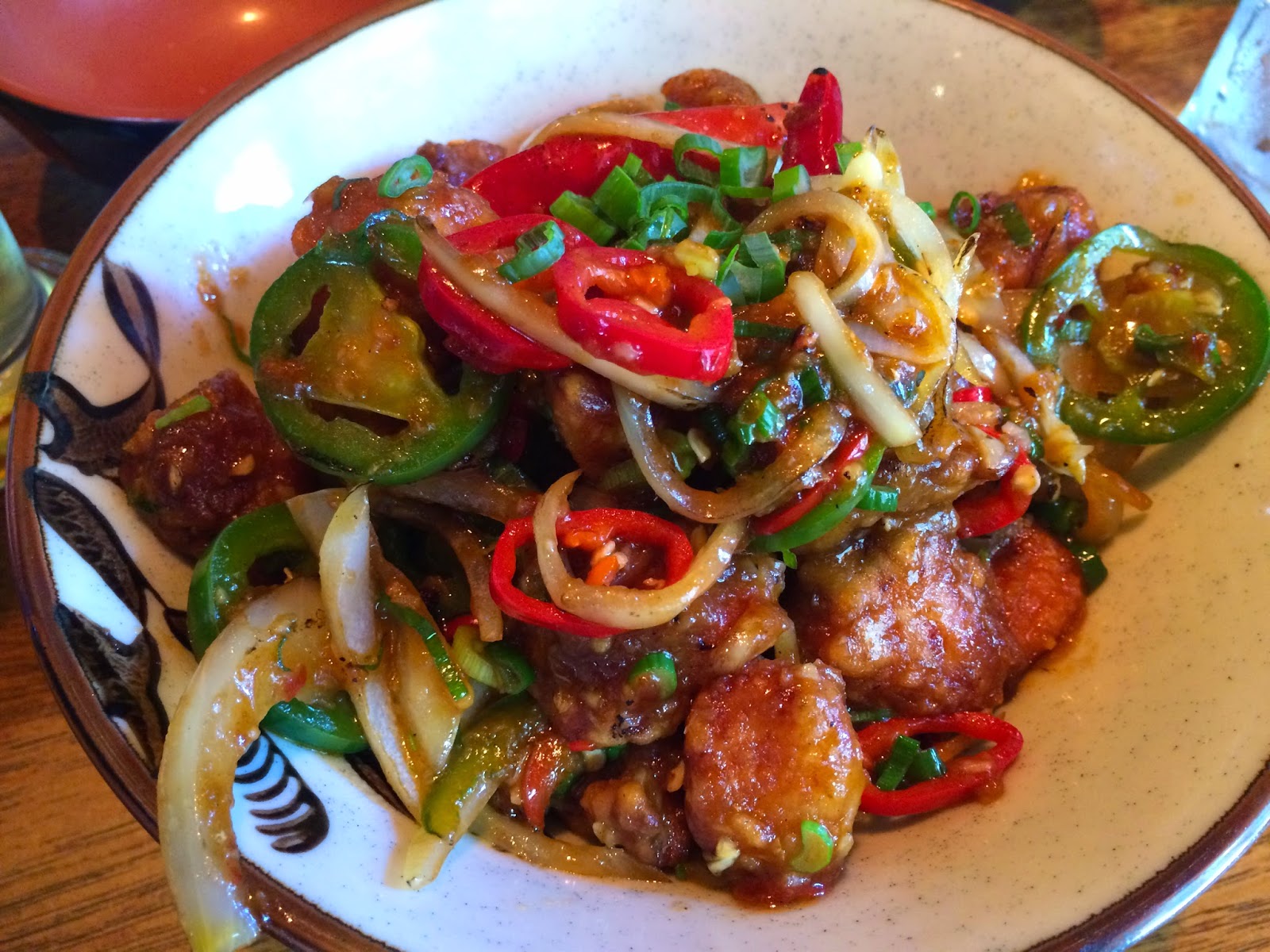 FIVE CHILI CHICKEN from Betelnut in San Francisco. It's basically Asian popcorn chicken with a million peppers, ginger, garlic, and a bomber sauce. Also, the restaurant was actually called BETELNUT. There isn't a shred of doubt in my mind that I'm pronouncing it wrong. I wanna just whisper betelnut, betelnut, betelnut and see if the mysterious BETELNUT will appear before me and be my creepy friend. Was that the plot to Beetlejuice? Close enough, betelnut. APPROXIMATE NUT RHYME 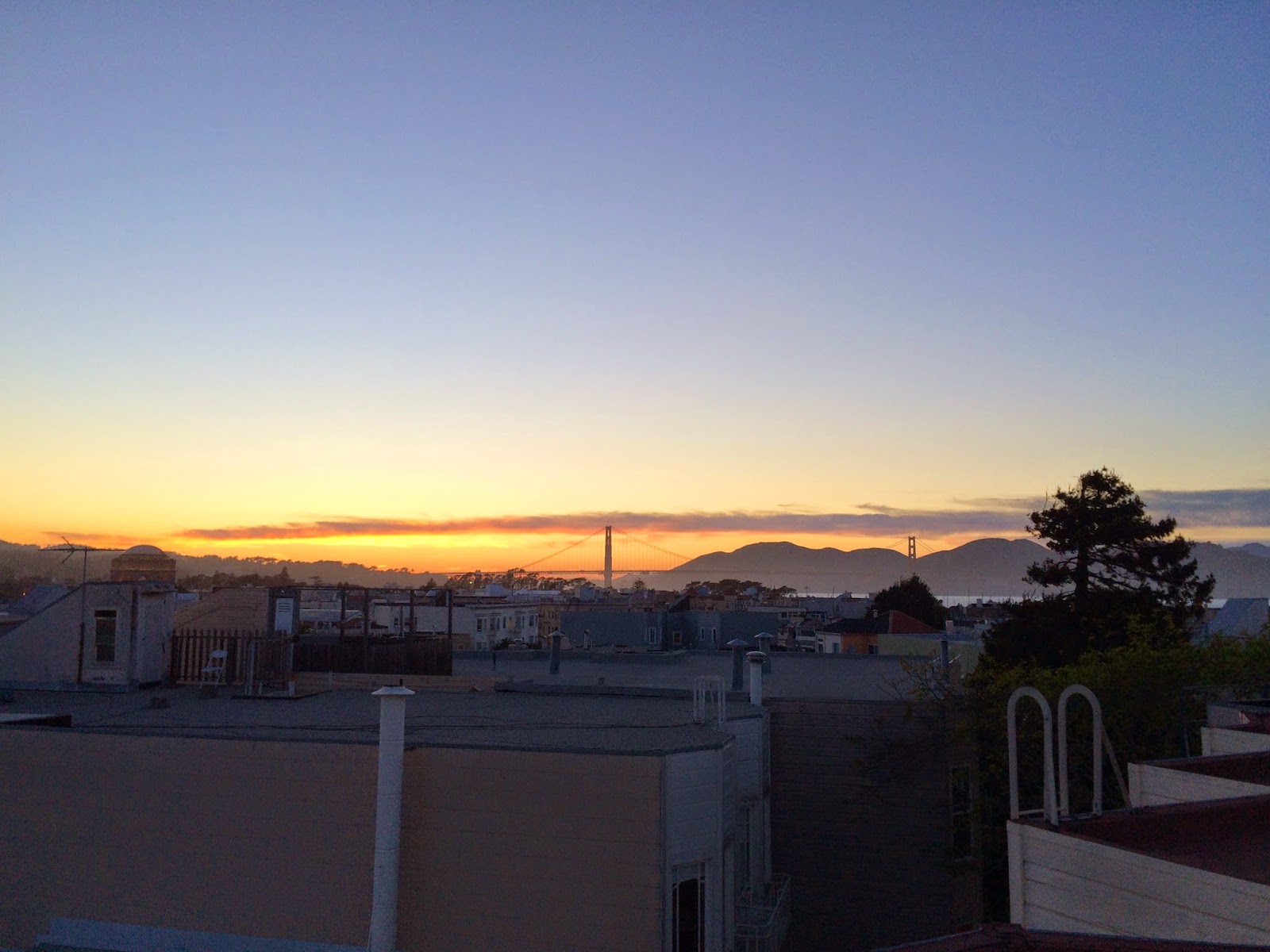 That's about the best I could do. This was more of a party weekend (Elite 8 UW game and Wrastlemania will do that), not a 'go hiking by the Golden Gate Bridge' weekend. Plus, San Francisco NEVER has clouds. It's either boring empty sky or fog. What's the difference between fog and clouds? Are fogs just low clouds? MIDGET CLOUDS?

WE ARE THE UNITED STATES OF WISCONSIN

ON WISCONSIN
Posted by Schwa at 6:16 PM