I think Corey Clement just made a loud statement about his value to this team. We kinda spent most of the year wondering if the running game sucked because of the O-Line, the backs, or both. Without jumping to conclusions (because Rutgers), I think we can safely say the issue was squarely on the back up running backs. I don't mean this as a slight to Dare and Deal, but they were back ups for a reason.

So here we are. 7-2 (4-1) in a season where we've had injuries at literally every position on the roster. A transition year with a new coach (albeit a familiar coach) and a young team... and yet, 7-2. That's actually pretty damn impressive when you consider everything that's gone wrong so far.

My excitement for this team is increasing. Something about them gutting out wins despite being in shambles is kinda fun. Like the German sub in U-571 that was all messed up, but the Americans took it over and kept battling on it and eventually sank a giant German destroyer with it after Trigger drowned while fixing the leak in the torpedo system. Out with the Remember The Titans season metaphor, in with the U-571 season metaphor. WHAT MOVIE THAT'S ON HBO EVERY WEEK IS NEXT?

PS - OMG, Trigger from U-571 was SMALLS from The Sandlot? That's amazing. And a few years ago he was arrested because he headbutted a cop after he was told he was too drunk to get on an airplane? You just never know where the internet is gonna take you.


CHICAGO BADGERS: Afternoon game, and don't look now but we're running out of gamedays. I'll preach now what I preach often: take advantage because while a game against Maryland might not be very exciting now, you'd murder for a 2:30 gameday party come January.

1) Ohio State, 8-0 (4-0). I feel like Minnesota/OSU SEEMED like a huge game before the season. I can see that. But it's gonna be a rough one on Saturday night for the Gophers. Primetime, woof.

2) Michigan State, 8-0 (4-0). And your other primetime game in the B1G this week? 3-6 Nebraska fresh off a loss to Purdue hosting MSU. It's a good night to be drunk and not care about football.

3) Iowa, 8-0 (4-0). As I'm writing this, "The Voice" episode of "Seinfeld" is on - hands down my #1 episode. I say that as someone who is probably as good at Seinfeld trivia as anyone you know. But it's a perfect episode: vintage Costanza (scooping water from Jerry's glass/Play Now rebellion), Jerry actually funny (HELLLLOOOOOO LA LA LAAAA), Kramerica/Darren the intern, PUDDY. It's got it ALL.

PS - The dean at Darren's school has the most outrageous hair: 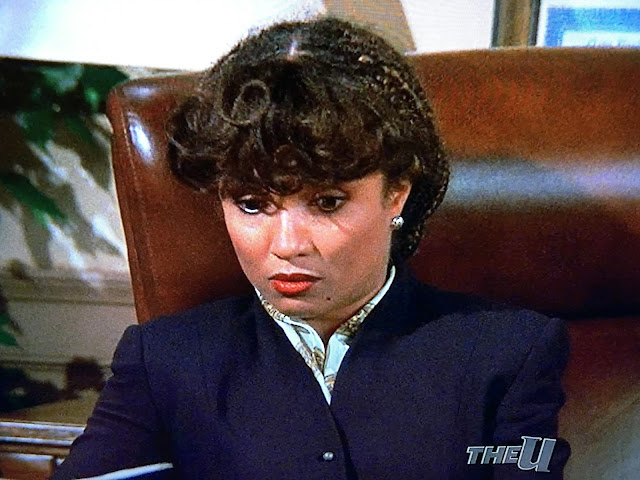 That's like two heads mashed together into one. Horrendous. Egregious. Preposterous. Capricious. Arbitrary.

PPS - "Mr. Thomassulo picked the WRONG MAN to hire because he was fake-handicapped!" George once again proving he is the core of this show.

5) Wisconsin, 7-2 (4-1). Alright, hoops quickie: if you don't know Ethan Happ by now, you need to. He redshirted last year, so he's got a year in the program battling Frank, Sam, and Nigel. He only redshirted last year because... we had Frank, Sam, and Nigel. There simply wasn't enough playing time to go around. This year, he will be UNLEASHED. I fully expect him to content for the Big Ten Freshman of the Year award, and he will be our third option after Nigel and Bronson.

Beast in the post, good size, good footwork... only going to get better and better as he gets more experience. Remember the name. #HappForHeisman

6) Michigan, 6-2 (3-1). I didn't watch the game, but apparently Minnesota's interim coach had an ominous debut. I don't blame him - clock management is HARD. Ignore everyone on Twitter ripping coaches for not using their timeouts correctly (I do this too): it's WAY different to be on the sidelines while all of that shit is happening and every second counts. Not easy.

7) Northwestern, 6-2 (2-2). A co-worker went to a Northwestern volleyball game this week and we were talking about places to eat in Evanston. We discussed the standard go-to's (Buff's, Edzo's, Mustard's Last Stand), but she heard about one I've never heard of named Bat 17. Two things we need to know: 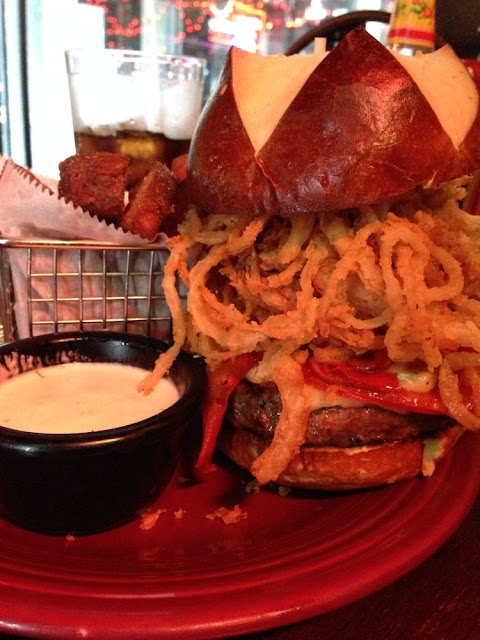 The pretzel bun on this burger looks like a crown and they HEAVILY endorse onion strings (the best shit in the world). And: 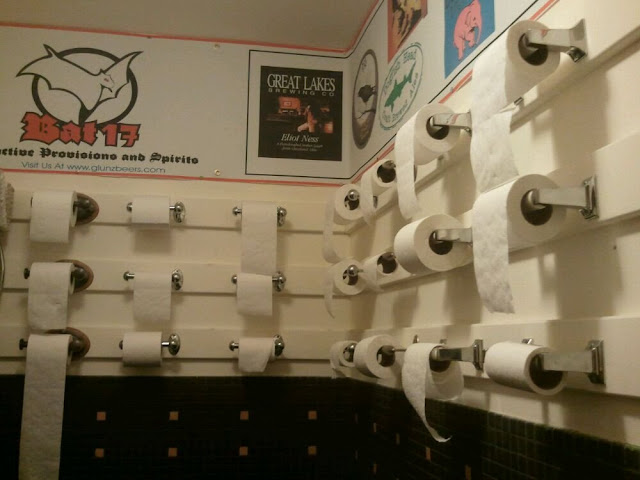 Toilet paper for DAYS. Every bar gotta have that one thing that makes you different than the other 3 bars on the street, and I like to think they held a brainstorming session one day to come up with their differentiating factor. I don't even wanna KNOW how bad every other idea was if their winner was having 50 rolls of TP in the bathrooms. "We can be... that bar with all the toilet paper!" POOP 17timesitsoktheresenoughtptogoaround

9) Minnesota, 4-4 (1-3). Michigan catches a huge break getting Minnesota on their interim coach. So annoying.

10) Illinois, 4-4 (1-3). The Wisconsin Hangover: had nothing in the tank after giving us their best shot. We buttered them up for Penn State like Bania riding Jerry's coattails.

11) Maryland, 2-6 (0-4). The other night I ate one of those Midnight Milky Ways and I legitimately convinced myself it was healthy because it had dark chocolate in it. Red meat gives you butt cancer, but dark chocolate probably balances it out. Gotta start eating dessert after every burger so I can live forever.

I like good buildups and intros, so this is right in my wheelhouse. No lyrics for the first 40 seconds. Perfect. I'm not even sure if this song ever gets to a chorus; it's just awesome the whole time doing its own thing.

Brandon's Undivided Attention To Football vs. Brandon's Unrelenting Desire To Shift To Hoops Season. I'm not being fair to the football team. As I mentioned, they've been pleasantly good at winning games despite a multitude of injuries. And now they're getting their horse back for the home stretch - so things are really trending up. But... all of this uncertainty about Bo Ryan's future has me soaking up every drop of UW hoops. Every. Single. Drop. And it's not like I wasn't already a freak who was a little too obsessed with Bo's teams - it's just in overdrive now. Any season could be his last, and there's zero guarantee that we'll be a great/elite program once he's gone.

I'm going to live in the now and be grateful for what he's done. No matter when he leaves, he's been a goddamn wizard.

Shh. Did you hear that?

Squeaking shoes on the hardwood

Bo Ryan is back


Everyone knows take one means take three. That's accepted loss in the trick or treat industry, like Potbelly writing off a million free cookies every year that the employees give to customers after fucking up their sandwiches. But for this monstrous witch to come in and just clean them out? Gimme a freaking break, and while you're at it find a new costume, preferably one that involves a large brown sack being thrown over every inch of your body.

Hey Shin Lim, don't know how to break it to you but you might be a witch. There's no other way to explain all the voodoo he just displayed. I have very little idea how he did pretty much anything in this trick. By 'very little idea', I mean I'm absolutely befuddled.

Why don't I watch this show? I loved magic as a kid, and apparently I still love getting my brain jimmies twisted by ungodly slight of hand. In fact, let's do another one:

I studied this one for an hour and was able to figure out how he swaps in the 'sealed' deck in Penn's hands (is that Penn or Teller?). But I will never in a million years figure out how he got that 7 of diamonds back in there. That's absurd.

Magic is so awesome. 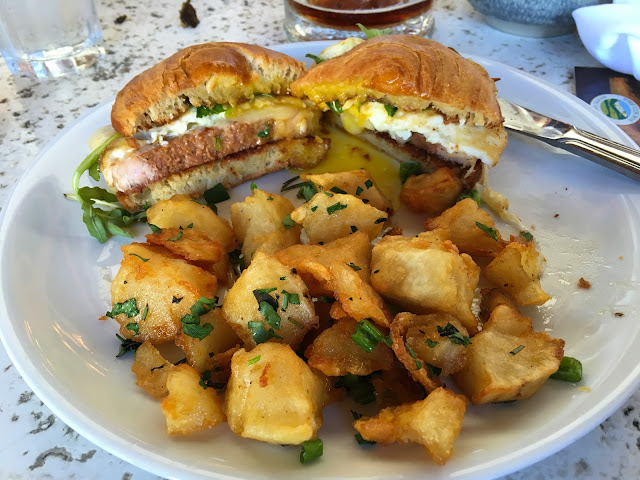 I'm going to level with you: I can't tell you with any certainty what was on that sandwich. I know it was on a croissant, and I know there was an egg in there, but the meat thing is a bit of a mystery to me. It may have been breakfast sausage stuffed in a piece of pork. I think that's what it was. I DO know that it was absolutely delicious, and it was exactly what the body needed after shooting 18 at the Course at Wente Vineyards.

Why do golf courses always serve the best food? Is it just because you're tired and hungry (and probably drunk) and you just wanna sit down and CHEW? Not sure, but I'm going to open a chain of golf course clubhouse style restaurants with a fake 18th hole to look out over while you eat, and I'm going to be a BILLIONAIRE. Golf attire REQUIRED. 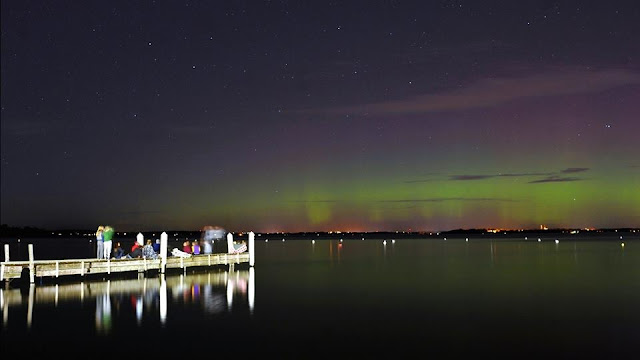 The Northern Lights are always spooky and always awesome. I wonder how many of the people on the dock there (I'm not telling you where this was taken because if you don't recognize it then you don't belong on this blog) were trying to take pics with iPhones. There's no way those pics turn out. I don't care how much better these cameras keep getting, they cannot match a real camera at night. Trust me, I've tried. SUPERMOON had me out there shooting like I was Ansel Adams. The Blood Moon a month or two ago? I was out there on the balcony trying to catch a hot shot.

They simply do not work. Don't waste your time.

ON WISCONSIN
Posted by Schwa at 5:12 PM