As I sit here drinking a Staghorn while watching National Treasure, I want you all to do something: come to terms with it now. Make your peace. Accept the reality that we are on the cusp of living: Wisconsin football is going to lose some games this year. As in, multiple games. MANY GAMES OF DEFEAT. This isn't even a knock on Chryst, his staff, or the team itself. This is simply a perfect storm of replacing a legend at the most important position on the field, coping with the loss of the best defensive coordinator in the land, and getting slapped with the hardest schedule I can possibly recall.

And I can assure you that I am not complaining. We've skated by on the softest B1G schedules you could construct for a few years now. Sure, we spiced it up with the LSU and Bama games. But let's not ignore all the feasting we've done on the Illinois/Purdue/Indiana/Maryland/Rutgers conglomeration of SUCK. It's kinda been our SOP the last 5 or so years: absolutely dominate all the sucky/decent teams in the conference, struggle mightily with the top shelf talent. I'm not even sure that's very surprising (I'd assume most teams do well against Rutgers and struggle with OSU). But now the tables are turning and the day is about to be darkest before the dawn.

So let's all enjoy this season as 12 weeks in the fall to drink before noon without consequence. Savor the victories, let the defeats drown directly into your beer, and remember that the hoops team is going undefeated and winning a national championship.


STILL ALWAYS LOOKING FOR REFERRALS: Another year, another time to get your peoples on the list. Alex Hornibrook, QB, Redshirt Freshman. A LEFTY gunslinger without a ton of recruiting pedigree that has been slowly chipping away at the upperclassman in the fall camp QB battle? SIGN ME UP WHERE'S THAT BANDWAGON CHOO CHOO. Yup, I'm officially going #AllInOnHornibrook this year. And that means you'll see nothing but the #HornDawg under center for the next four years. LOVE IT.

Quintez Cephus and A.J. Taylor, WR, Freshmen. Hey hotshot WR recruits: wanna play your freshman year? Come to Wisconsin, where if you've got talent you're gonna get on the field. There is NOTHING ahead of these guys keeping them off the field. All the reports from camp this year indicate they're taking advantage of the opportunities. I'm kinda over the whole Wheelwright/Love/Peavy/Rushing group. Gimme the kids and let's see if they got some game.

Not gon' be easy

Gonna have to earn them all

Opponent: #5 LSU (in Grenn Bay)
Date: 9/3
This is the game most likely to... have the most obnoxiously fun, drunk, and gluttonous tailgate the North has ever seen.
We will win if... Fournette's ankle does heal and Clement finishes what MGIII started and UW fans buy up the remaining tickets and turn this into a home game and like 8 other little things go our way.
What's for sure actually going to happen: Aranda will feel bad for a split second before realizing how much more money he now makes AND he has the SEC horses to ride. Life ain't fair.

Opponent: AKRON
Date: 9/10
This is the game most likely to... make the outdoor patio at Will's the most glorious place in the world as we coast to a victory on a sunny afternoon day in early September.
We will win if... the sun rises in the east and sets in the west.
What's for sure actually going to happen: Hornibrook rebounds from a tough LSU opener and tosses a few touchdowns with that lefty saucer tosser.

Opponent: GEORGIA STATE
Date: 9/17
This is the game most likely to... have us looking back fondly upon better times, before we entered the B1G meat grinder.
We will win if... screw it if we lose this one then we can officially start counting down the days until hoops.
What's for sure actually going to happen: Four different UW running backs rush for touchdowns. Jamo flows. Life is good.

Opponent: at #12 Michigan State
Date: 9/24
This is the game most likely to... set the tone for Murderer's Row
We will win if... forget winning the game, let's call this day a victory if we can make it to halftime without a replay or mention of the stupid hail mary years ago.
What's for sure actually going to happen: Russell Wilson, Montee Ball, and Jared Abbrederis couldn't win in East Lansing. I'm not sure Hornibrook, Clement, and Wheelwright will have better luck.

Opponent: at #7 Michigan
Date: 10/1
This is the game most likely to... confirm our utter hatred of the entire state of Michigan.
We will win if... Michigan somehow turns out to be WILDLY overrated and we return the opening kickoff for a touchdown and then hold on to the ball for 51 minutes.
What's for sure actually going to happen: That STUPID FREAKING FIGHT SONG will be blaring all over the stadium nonstop and it won't be because we're doing good things.

Opponent: at #17 Iowa
Date: 10/22
This is the game most likely to... feel like the light at the end of the tunnel.
We will win if... we channel a little previous magic and remind them of their pecking order in the B1G.
What's for sure actually going to happen: You know what, I'm kinda talking myself into this upset. Why not.

Opponent: NEBRASKA
Date: 10/29
This is the game most likely to... result in an obnoxious Wisconsin blowout because we seem to have Nebraska's number and look out it's another NIGHT GAME in Madison.
We will win if... the offensive line has figured it out by now and Clement is healthy and running like he wants to get drafted.
What's for sure actually going to happen: Rain points on them like fire from the sky.

Opponent: at Northwestern
Date: 11/5
This is the game most likely to... seem like it should finally be a breather on the schedule because nerds but still probably end in heartbreak because in Evanston.
We will win if... a natural disaster relocates the game to anywhere but Evanston.
What's for sure actually going to happen: We will lose because Evanston.

Opponent: ILLINOIS
Date: 11/12
This is the game most likely to... THANK YOU ILLINOIS FOR BEING YOU AND STILL EXISTING YOU MAGNIFICENT BAD-AT-FOOTBALL BASTARDS
We will win if... we want to have any chance at going bowling.
What's for sure actually going to happen: W.

Opponent: at Purdue
Date: 11/19
This is the game most likely to... oh hell yes my birthday is on a Saturday this year? Can't wait to not make it to midnight!
We will win if... Purdue continues to be chasing a real quarterback, which I'm pretty sure they are. NO CURTIS PAINTER TO SAVE THE DAY FOR YOU.
What's for sure actually going to happen: #BoilerDown

Opponent: MINNESOTA
Date: 11/26
This is the game most likely to... make me take screenshots of Minnesota players saying how THEY GON' TAKE THAT AXE in the week leading up to the game.
We will win if... we remember who we are and who they are.
What's for sure actually going to happen:

I can't get over how awful these people are and how satisfying it was to see the 'spokesperson' keep looking at the fake lawyer and neither of them have any good response. It's also great seeing one of these ABC15 LOCAL NEWS SPECIAL INVESTIGATION UNIT types of reports actually do something interesting.


This guy is a wizard. Who gets a ticket and just gets caught up in how charming and sweet the cop was? None of this makes any fucking sense. You know in Pulp Fiction when Samuel L. Jackson is talking about how he doesn't eat bacon because pigs are dumb animals and Travolta is like 'well what if there was a smart pig, would you eat it?' and Jackson says 'we'd have to be talking about one charming motherfucking pig'? This cop is that charming motherfucking pig.

You know, after moving out of a third floor walk up, throwing it all into a U-Haul, and then getting an ADDITIONAL U-Haul the next week to get a couch, let me just say that I'd pay one billion American dollars for this kind of Japanese moving treatment.

In other news, I'd turn down a salary of one billion American dollars a year to pack, move, and unpack people for a living. What on earth are these people thinking. 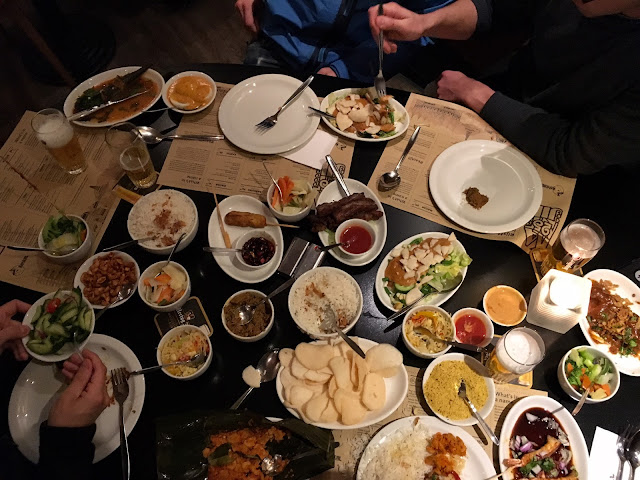 A massive Indonesian FEAST from Kantjil & De Tijger in Amsterdam. Amsterdam was the first leg of a multi-city Eurotrip I did in April and this meal was one of the absolute highlights. I have literally no idea what anything is, I just know that it was all incredible and there was more than enough food to satisfy 4 hungry, drunk dudes. If Amsterdam having great Indonesian food is somehow the result of the Dutch East India Company, then the Boston Tea Party was totally worth it.

Not sure the next time you'll see something like this... #chicago #skyporn #🌈 #🌈🌈


Still all amped up from that double rainbow in Chicago last month. Goddamn that was beautiful.

Expectations have been properly calibrated. This team wins 10 games with last year's schedule, but we don't have last year's schedule. Instead, we're breaking in a new QB with a new defensive coordinator in a year where 5 of our first 7 games are against teams ranked in the top 17. It sucks, but beating up on Rutgers and Maryland for 10 cheap wins isn't that special either. Plus, if we beat any of those ranked teams, it'll have a two-pronged effect of simultaneously locking up a bowl bid for us and ruining some magical season for them.

It's alright to play spoiler every once in a while. Our turn to watch the world burn.

7-5 and we beat a 'better' team on paper in a bowl game. Pack it up and get better for next year.

ON WISCONSIN
Posted by Schwa at 5:36 PM