The #Badgers have their starting QB.

Now THAT is how you start the season with a bang. Completely whiffed on the QB race. Looking real smart over here.

But whatever. Neither of them are world-beaters, and Chryst is as much of a QB guru as we're ever going to have. I just liked the thought of a lefty with a sweet name. Will have to settle for a righty with an almost as cool name.

We all know what's gonna happen, right? Houston comes out and picks apart Aranda's D and I start tweeting about how I've been #AllInOnHouston since day one. JUST AS I FORETOLD.

Three days until kickoff. Three days of continued nonsense like this until football actually happens and we can shed that false facade of not caring because the schedule is super duper stacked. Just beam me up to Lambeau now and let's see what happens when LSU and UW fans get together for the greatest tailgate the north has ever seen.


CHICAGO BADGERS: Don't have too much fun at Will's without me and if you win the scarf in the raffle I got dibs.

3) Michigan, 0-0 (0-0). Last year: "Yeah I'm sure this Harbaugh situation will not get increasingly annoying as they start winning. Nope, not one bit."

...and now they're top 10 preseason and some people are predicting they'll go undefeated. I like to imagine a world where they choke away a game as horribly as that MSU punt debacle last year. That's my kinda world!

PS - A bunch of us were at a bar after a rehearsal dinner last month and they happened to have that Michigan/MSU game on TV and I was NOT kind to the Michigan kid in attendance. Not sure how many times I asked him if they REALLY ended up losing this game and how that was possible, but let's just say I was not being very nice. DON'T CAREEEE

5) Wisconsin, 0-0 (0-0). I honestly don't feel crazy saying we're the fifth best team in the conference. The problem is just that we play the top 4 in four consecutive weeks, and three of them are on the road. The schedule gods giveth, and the schedule gods taketh away. For the schedule is dark and full of terrors.

6) Minnesota, 0-0 (0-0). If you were born the day after Minnesota's last victory over UW, you'd be 13 years old by the time this year's game rolls around. Imagine being a Minnesota-bred fan that hit puberty before seeing them beat Wisconsin. Wait did this just get weird, should I just recycle my fact that YouTube didn't exist the last time we lost to Minnesota? OK that feels a little healthier.

7) Nebraska, 0-0 (0-0). We've reached the "these teams are all so mediocre I don't think it really matters what order they're in" portion of the rankings. What a fun group!

8) Penn State, 0-0 (0-0). Paterno truthers are beyond comprehension. Is there any type of truther that isn't completely insane? Do truthers ever end up actually being right, or is that why they're mockingly called truthers in the first place?

9) Northwestern, 0-0 (0-0). I know I'm getting smarter as I get older because this year was the first time I saw we were playing in Evanston and I didn't even have the TINIEST shred of desire to go to that game. We will lose in a cold, rainy game where Northwestern scores on an end of half 15 lateral trick play. No thanks. I'll stay warm and dry and drunk and content.

10) Maryland, 0-0 (0-0). I have absolutely nothing to say about Maryland football so here's a cute dog in a beer koozie: 11) Indiana, 0-0 (0-0). Some people who understand football better than I do claim they're on the way up. I'm of the 'believe it when I see it' school with regards to IU football. Yeah, they hung with Michigan, OSU, and Iowa last year... but they blew a 25 point lead late in the third quarter against Rutgers. People don't forget and people CAN'T forget that.

13) Illinois, 0-0 (0-0). Do they even have a football team this year? Are they on probation? Juice Williams ain't walking through that door anytime soon.

14) Rutgers, 0-0 (0-0). Worst major conference addition in all of the realignment nonsense. Bring SOMETHING to the table. ANYTHING.

The quality of this video makes absolutely zero sense given the equipment it was filmed with 25 years ago (!!!), but seeing a performance this intimate right as they were about to blow up is really cool. I believe this was days within the release of Nevermind, which makes it all the more awesome.

Dave Aranda vs. Paul Chryst. Well I mean this is kinda fun, isn't it? Former colleagues squaring off: one a defensive master, the other an offensive wizard. GOOD VS. EVIL. Who will recognize the other's moves more quickly? While I'm sure they'll each have some new wrinkles, you can damn well know a lot of what Aranda and Chryst did last year will still be in the fold. The mind games will be in full effect. We're in for a treat.

But there's nothing wrong with that

This isn't the first time we've been awed by hermit crabs, and god-willing it won't be the last. Endlessly fascinating creatures that are adorable and weird and almost gross but totally silly at the same time. Try and find something else like them.

PS - It brings me a never-ending bucket of joy to report that Harry the Hermit Crab is not only still alive, but he's THRIVING: 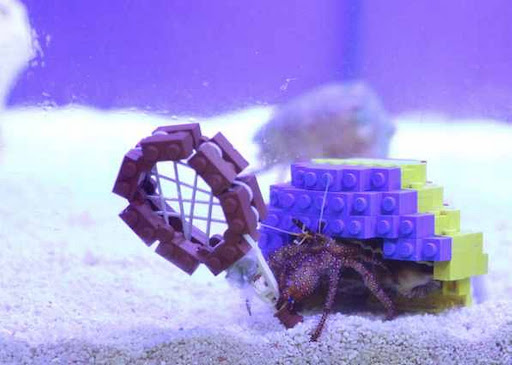 PPS - Actually I can't find a single thing about Harry so we can safely assume he's completely dead in a LEGO casket somewhere.

PPPS - Wait, hermit crabs live 10 years? Can't let a mystery remain. I've reached out to a former aquarist at the Legoland in the UK where Harry lived and their customer support to find out how he's doing. Hopefully I hear back shortly. 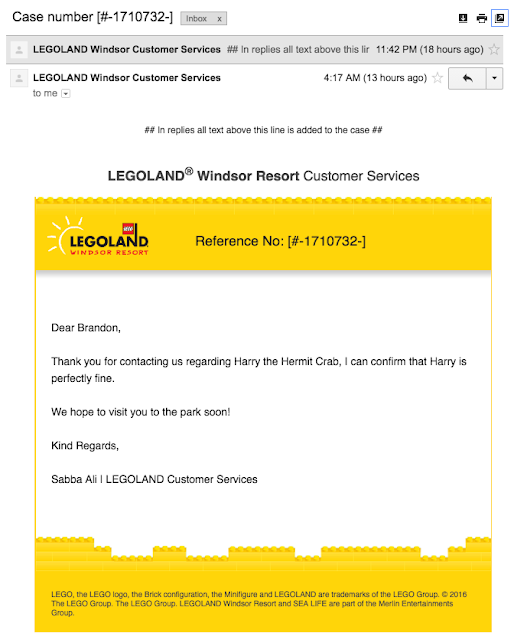 Not even a hermit crab but just feel like dancing

Apparently the hermit crab and the anemones are MUTUALISTS, since they just help each other out for the greater good of the both of them. Well, these dudes and these birds are ALSO mutualists, as the birds lead them to hives for honey, and then the humans leave some for the birds. Just a matter of time before some greedy mutualist breaks the mutualist code.

Okay remind me to never have a funeral or go to a funeral or just avoid death in all respects at all costs. This was some morbid, depressing #realtalk. 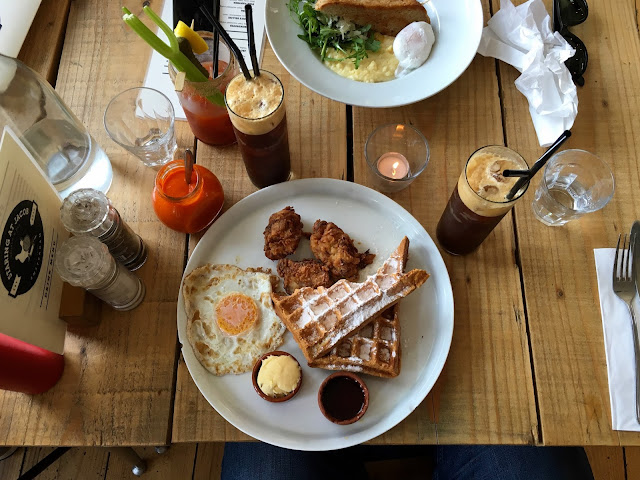 A Dutch take on American chicken and waffles from Staring at Jacob in Amsterdam. I'm currently starving and everything about that plate looks amazing all over again. Amsterdam was cool.


The sneaky thing with that Double Rainbow we had in Chicago was that there was a perfect post-storm sunset directly on its heels. As in, right when the rainbows were gone, you just turned around and saw this sky. My kinda night.

If you haven't noticed yet, I'm feeling extremely grounded in my excitement about this season. Well, it's not the excitement that I'm dampening. It's really my unrelenting quench for VICTORY that I'm finding ways to suppress. And that's why I know we're going to lose, but I'm sure something will happen to give me that glimmer of hope again... all before tearing it down and watching LSU still cover that 10 point spread. THE PICK: