It's exhale time. Let it out. All that obnoxious pressure of going unbeaten is out the window. And if we the internet nerd fans feel that pressure release, one can only imagine the tension dropping in the locker room as well. So let's address some facts:


BELIEVE that. Run the table, beat an undefeated Ohio State on a neutral field, and anything is damn well possible.

For that to happen, however, UW needs to go into Iowa City on a Saturday night and stuff the Hawkeyes into a barrel and bury them in a cornfield. This was a huge game 3 weeks ago; it's an ENORMOUS game now. I like to think Chryst's pregame speech goes beyond his usual 2 sentences and gets the guys fired up like we haven't seen before.

Last week was rough. But there's all sorts of opportunity and season left. I don't plan on letting that game ruin my enjoyment of this season, and you better not either. Back on the horse. Bury the Hawkeyes. LET'S go!

There's a little something here I'm digging. Can't put my finger on it but in a week where I don't have a lot of new music I'm enjoying, this will have to suffice.

PS - this song is one of many I've swindled from this Spotify playlist of songs with fewer than 2,000 listens. Some guy that works at a radio station curates it and shared it on reddit a while ago. Hidden gems galore in there.

Handing over a phone with ZERO texts on them! Amazing! He 'routinely deletes all texts after sending or receiving them'. Now, I don't mean to judge, but that seems kind of fishy! Here you go - I have nothing to hide! *winky face*

PS - boy I hope I never get in trouble because I delete NOTHINGGGGG. I still have texts on my phone from 2009. I graduated college that year! Texts take up just a bit too much of my phone's hard drive: 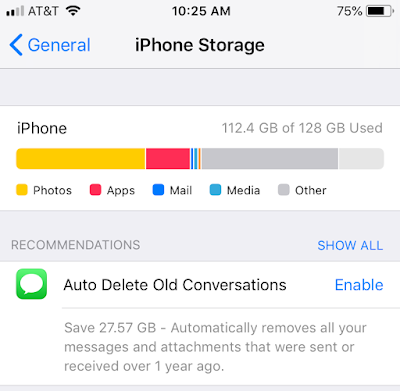 I know what you're thinking: DELETE THEM YOU PSYCHO. But I can't. I can't do it. For those 2 opportunities a year where I get to call someone out based on something said in a text four years ago, I NEED my archives. Being a digital hoarder is nearly as dangerous as being a physical hoarder.

3. Wisconsin, 2-1 (0-0). Let's pause for a second to marvel at the latest round of political correctness stupidity:


Student council members at The University of Wisconsin-Madison are demanding the school change the ingredients in the official university ice cream, claiming that the current ingredients are discriminatory toward some minority students.

UW-M’s official ice cream, the Babcock, contains a beef gelatin additive, which according to the legislation, “renders certain communities such as the Jewish, Hindu, Buddhist, and vegetarian unable to enjoy it without violating their beliefs.”

The legislation, titled “Ice Cream for All,” is already has eight sponsors, including the Chair, Vice Chair, and Secretary of the Associated Students of Madison Student Council. The ASM student council is comparable to a student government senate. The “Ice Cream for All” legislation will be voted on next Wednesday.

The legislation states that the Babcock Ice Cream is an important tradition at UW-M, and “it would be a gross act of discrimination to continue to deprive some minority students” from eating the ice cream because of their religious beliefs. Sponsors of the legislation also added that issues like this play a part in the marginalization of students.

“Symbolic issues like these have always and will always play a critical role in whether marginalized students and people feel welcome, included, and connected to their community,” reads the legislation.

Oh you have GOT to be kidding me. First of all, and perhaps LAST of all, who the hell cares this much about the official ice cream of UW? This is the biggest waste of anyone's time. And if you want student 'government' to be taken seriously, I don't think this is the hill you want to die on.

It's freaking ice cream. Get out of here trying to turn the world into a pack of mindless vegans.

PS - do I love that beef gelatin is involved in the ice cream making process? Of course I do! It's like finding out that McDonald's fries are laced with beef fat. Some vegetarians were probably appalled by that, but if you're the kind of vegetarian that goes to McDonald's then who do you really have a problem with? Can I get more foods cooked with beef fat? I'll dip a goddamn chicken tender if beef fat if I have to.

4. Iowa, 3-0, (0-0). I'm sure after that beef fat riddled rant you're thinking I'm not a very healthy person. KEEN BRAIN ON YOU, GENIUS FACE. But we live in a world where one day you hear drinking red wine and coffee and eating chocolate every day decreases your risk of getting heart disease and cancer. And the next day there's ANOTHER study saying red wine, coffee, and chocolate will send you to an early grave. BPA in your water bottle is going to give you butt cancer, right? Well guess what: non-BPA water bottles are gonna give you toe cancer.

Everything is going to kill you at some point. Unless you want to eat grass, drink water, and live in bubble you have to accept that life is too short to be afraid of everything. As far as I can tell, there's no better way to do this whole life thing than enjoy the risky things in moderation, keep the carbs low during the week, mix in a little exercise, and laugh at the people who get irrationally mad about ice cream.

5. Minnesota, 3-0, (0-0). I've been battling through an annoying cold the last few days and nothing has ever resonated more closely with me: 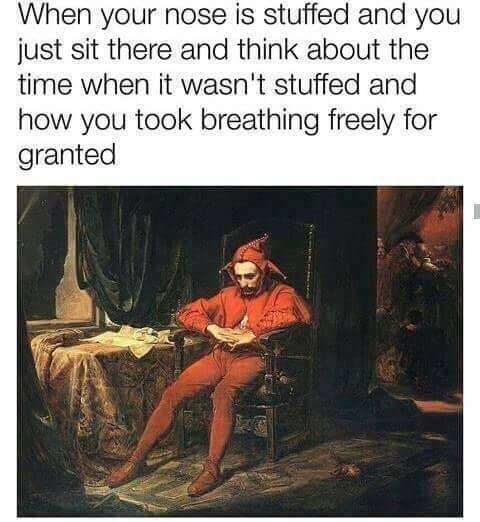 I love memes that are so low quality the text has all that pixelated noise around it. That's good, blue-collar meme action.

PS - had to google the difference between white-collar and blue-collar because I couldn't remember which one was which. And I think that officially labels me white-collar to the bone.

6. Michigan, 2-1 (0-0). If this season DOES tailspin out of control, then I can just say I hope we curb stomp Michigan as the lone bright spot?

8. Indiana, 3-0 (0-0). Let me tell you how excited I am to drop hundreds of dollars on a vacuum cleaner this weekend. So excited.

PS - Bed Bath & Beyond would do us all a huge favor and just permanently have everything on sale for 20% off instead of making us remember to bring those damn coupons with. 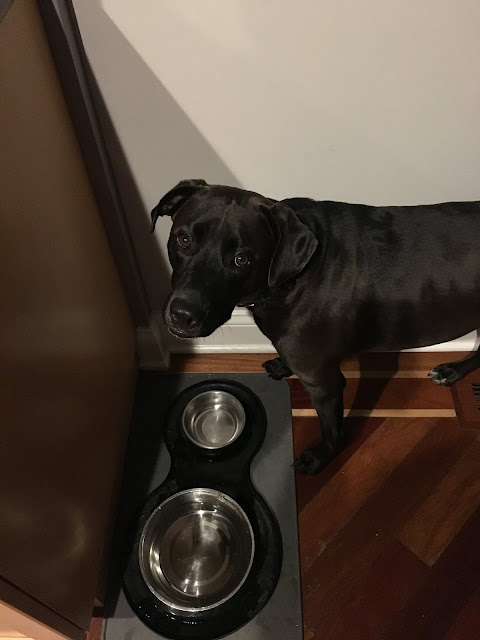 How can you resist that begging face?

14. Rutgers, 1-2 (0-1). If ANYTHING should be the final nail in the coffin for Rutgers in the B1G, it has to be getting smokeponied by Kansas... in football. That is embarrassing in 15 different directions.

Time for a night game

And time to get back on track

The Tom Green Show was ahead of its time. There's a real subtle beauty to this clip, and by subtle beauty I mean the customer's reaction is absolutely bizarre and hilarious.

Kinda long (welcome to the internet in 2018 where 4 minutes is long for a video), but sweet lord did this have me in tears. The side view of his created character killed me. 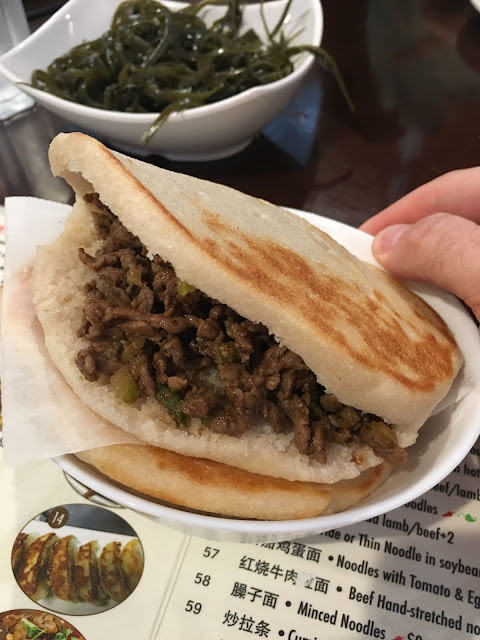 Chinese street food from Xi'an Cuisine in Chinatown. Specifically, this would be North Chinese cuisine. Small BYOB place and I highly recommend you go and get every time of little meat-filled bun thing they have. So good, so cheap, and further proof that every cuisine has their own version of pita/naan. As they should. It's delicious. 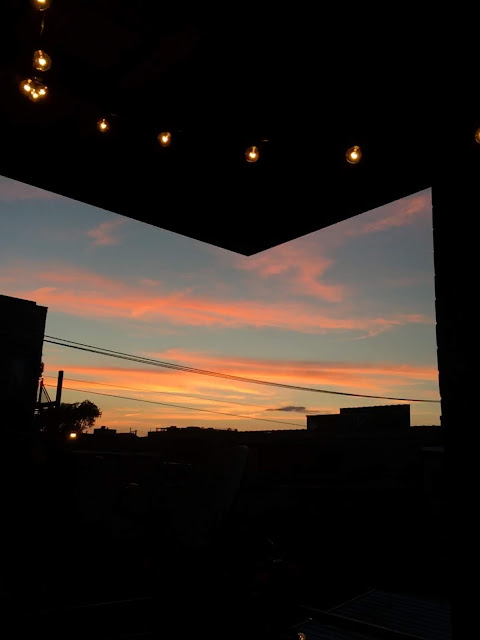 Me trying to take a cool pic of the sunset while simultaneously showcasing the string lights I nearly died hanging. ART.

Bounce back season has arrived. THE PICK:

ON WISCONSIN
Posted by Schwa at 2:58 PM