At this point it's clear the Badgers and the Packers are in a race to see who can disappoint their fans more, and we are all losing in this competition. I don't know what else to say. There are some great individual players on both teams, but combined the teams themselves are just mediocre. Greatly frustrating in all directions.

So let's not dig any deeper. Instead, SANDWICH POWER RANKINGS:

1) French Dip. Warm, sliced prime rib on a perfect roll with a bucket of au jus for dipping. Sop that juice up. Dip the fries in there too. Go wild. This is what heaven looks like.

2) Pastrami & corned beef with swiss on toasted rye. The sandwich has to be hot. And if you get some pastrami and corned beef warmed up and working together, nothing is impossible.

3) Breakfast meat, egg, & cheese. It doesn't even matter what bread you go with (bagel, croissant, MCGRIDDLE PATTIES). Nor does it REALLY matter which meat you use (anything from bacon to sausage to chorizo plays just fine). All that matters is that the yolk is runny, there's good hot sauce available, and you have additional breakfast meat and taters on the side to sop up all the overflow yolk.

4) Hot chicken with pickles and some slaw. The Hot Chicken Revolution has been welcomed with open arms. All bout that life. Biscuit or brioche. Hot as possible. I want that chicken coated in whatever the hell is in that dark spice rub that you can tell is really freaking hot because it's in the seasoning more than in the sauce. Roost, you complete me.

5) Bahn mi. Spicy peppers, sweetness in the marinated meat, perfect crusty bread and the right amount of crunchiness from the rest of the veggies. Can I dunk a bahn mi in some au jus and call it VIETNAMESE AMERICAN FUSION? I have a theory that all of the best fusion restaurants use an Asian cuisine as one of the molecules.

Now please roast me alive about the obvious mistakes I've made and how deeply offended you are by my fickle sandwich preferences.

PPS - no a hot dog is not a sandwich, and including burgers here felt weird. Burgers are their own category of food.

PPPS - never been a big grilled cheese fan. In my eyes it's the Beatles of the sandwich world: I understand everyone loves it and looks at it like it's the best thing ever, but I don't dig it myself.

TV: BTN
WEATHER: CHILLY, RAINY, COULDN'T PAY ME ENOUGH MONEY TO SIT IN THE STAND AT THIS ONE

I still look back fondly on the time when Walk The Moon was a slightly less famous band that had some bangers. I know that's typical grump old man, but I think I just aged out of their target demo very quickly.

It appears I do not give off an aura of confidence when it comes to running a fireplace.

2. Ohio State, 9-1 (6-1). Every week at work we have a team meeting where each person updates the rest of the group on what they're working on, and then shares one item of personal news. Was it weird that my personal tidbit was 7 minutes of explaining how I'm going to cook a giant prime rib roast for Thanksgiving?

PS - this is all you need to know

3. Northwestern, 6-4, (6-1). I love how Northwestern is PROUDLY TELLING THE WORLD that they have to pay their students to go root on their football team in their first and only B1G Championship appearance. If it's possible for them to break our record for most losses for a B1G West champion, then I'm sure they'll find a way. FRAUDS.

4. Penn State, 7-3 (4-3). I didn't really get all the called runs for a quarterback with a busted knee, but then again I'm an idiot on a couch and not a multi-million dollar a year college football coach.

5. Michigan State, 6-4, (4-3). Watching the Packers/Seahawks game and it's completely clear that the world (NFL) has gone insane when it comes to what is/is not a catch. I know this is not a fresh nor hot take. But it needs repeating: there's not a single logical aspect of defining a catch in modern football. BITTER.


This girl in the background is ready to risk it all for Ethan Happ pic.twitter.com/V24EGuhnXZ
— Bailey Carlin (@BaileyCarlin) November 14, 2018 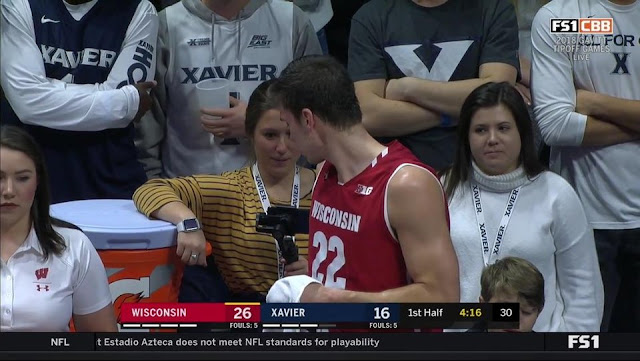 Can't blame 'em for looking. Everybody know a stud when they see one.

8. Minnesota, 5-5, (2-5). The worst part about being a dog owner is accidentally waking a dog from a nap and watching those terrifying dinosaur sideways eyelids slither back as its eyeballs roll around to consciousness. I am so sorry. Eyeballs rolled back into your head sleep is sleep you don't want to get pulled out of.

9. Purdue, 5-5 (4-3). Is this a big game for Purdue? What's on the line? Something tells me they'll do a COPPER OUT and have a live locomotive train re-route through the stadium instead of a flyover.

PS - why doesn't Purdue have a giant train set that goes in circles around the top of the stadium? Who doesn't get amped up when they go to a bar that's got a toy train set working overtime around the perimeter? People flip their shit at Augie's when that beer train goes zooming by. CHOO CHOOOOOO

10. Indiana, 5-5 (2-5). Would Kramer's garbage disposal in his shower prevent hair from clogging the drain? If so this is not nearly as stupid of an idea as everyone treated it as. 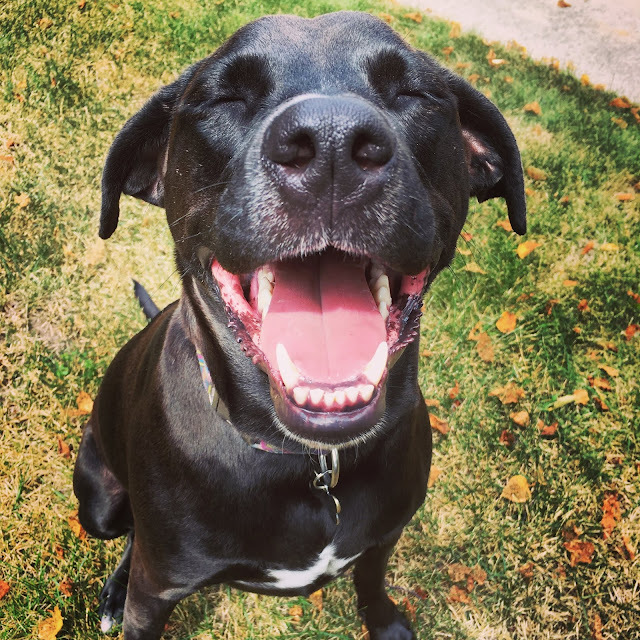 12. Nebraska, 3-7, (2-5). I got halfway through a stupid story about why Patagonia is amazing and North Face sucks before literally saying 'no one cares about this' and deleting it. Let's move on!

One thing is for sure:

Ethan Happ is a bad man

Back to the tourney

Nothing crazy - just quality footage of Freddie Mercury dancing his way through Hungary. These band movies are always weird, especially when there's actual footage of them living and performing like this.


Embarrassing your children has to be one of the absolute joys of parenthood. Bonus points if you're rocking that mustache/sunglasses combo, which screams out DAD more than anything else in the world. Pump up those subscriber numbers, dad. 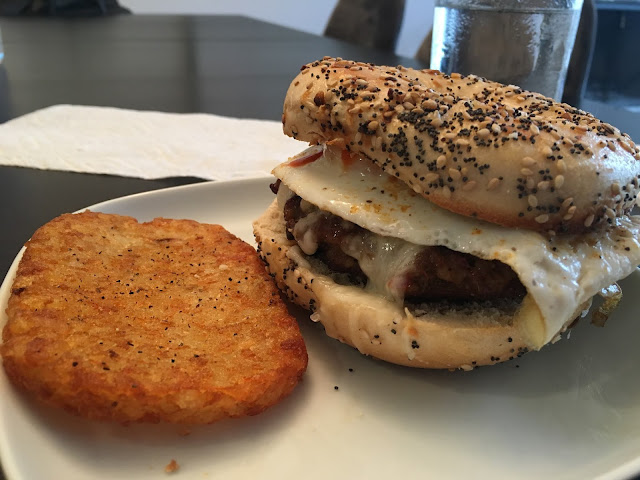 As I said above. very few things can beat a perfect breakfast sandwich. Especially when you cook up the sausage and eggs fresh and toss onto a toasted everything bagel with two slices of cheese. And obligatory side hasher. This is how you Saturday morning. 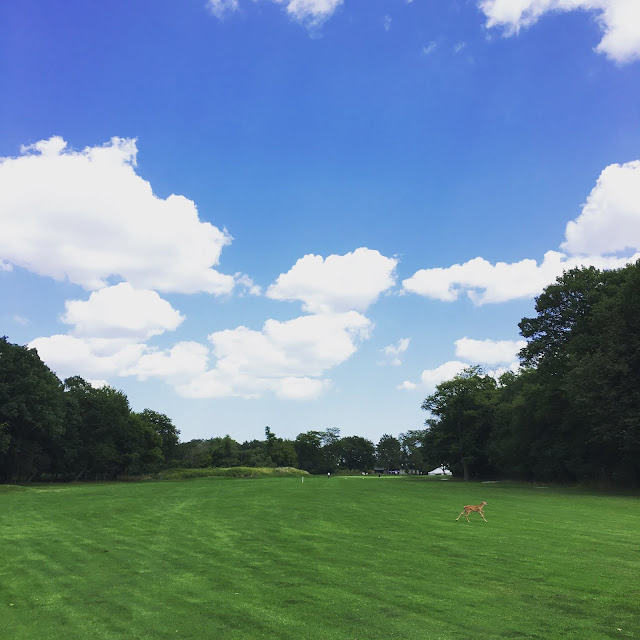 For the first time in my life, I went golfing by myself. Just me, some beer, wild inconsistency, and this little baby deer. Perfect summer weekday. And now we haven't cracked 40 in a week. Time f l i e s.

Dare I say, we aren't good at football this year. THE PICK:

ON WISCONSIN
Posted by Schwa at 10:55 AM