YAWN.  Quick thoughts on the drubbing of whichever Dakota we abused:So there you have it.  The cupcake portion of the schedule is over (and please don't get me started on the strength of the non-conf schedule.  I know a lot more about it and what goes into it than you do, and I'll just preemptively tell you that you're wrong).  Big, bad Nebraska comes to town this weekend, along with an undefeated record, 20,000 fans, and a quarterback that has a worse arm than I do.  So exciting. CHICAGO BADGERS: You are on your own.  If you're not going to Madison, I hereby declare that you're freaking crazy.  #MADTOWNBOUND**Official hashtag for Friday.  Me encanta los hashtags. SHAMELESS PLUGS:Links to the things I do.  Link to the Badger Roundtable.  Link to a picture of a velociraptor to see if you're paying attention.  READ MY WORDS.  I even copy/pasted this part from last week!  ARE YOU NOT ENTERTAINED? WHO/WHERE/WHEN 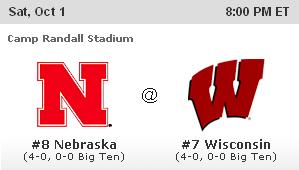 TV: ABC WEATHER: SOMEWHERE BETWEEN 38-58 DEGREES, WHEN YOU FACTOR IN THE ALCOHOL THAT'S LIKE 90, SUMMER FOOTBALL!THE BEST MEALS IN MADISON 8) Buffalo Bites - The City WILDCARD.  I feel like very few people will agree with me on this (shocker), but have you TRIED the Buffalo Bites from The City?  I'm gonna guess that no, you haven't.  For starters, they're grilled, not fried.  Therefore I can reasonably justify this as the healthiest meal on the list.  Once the chicken is grilled, they just coat 'em up with their kickass buffalo sauce - which is a damn near perfect mix of heat and flavor (not an easy thing to do.  Most places just go straight up Frank's).  Grab a couple sides of their divine ranch, and you've got one of the better appetizers around, which easily doubles as a meal.  The only downside to this?  You have to go into the dungeon that is The City.  Not my favorite bar in Madison, but they did have the NFL Network at a time when no one else did.  That was totally clutch that one Thursday night that the Packers played the Cowboys and you couldn't watch it anywhere else. The Pack lost.  Favre got hurt.  It was NOT the most glorious of nights.But still, The City very quietly has some of the best bar food on State Street.  And one of the waitresses there looked EXACTLY like a friend of mine from elementary school, just with more tattoos.  I'm not sure how this is relevant or how it helps, but it just does. PS - They make their own frips.  What do people think about frips?  Warm potato chips?  Rather have fries?  I think they're pretty hit or miss. I will tell you this, however - Chicago Q has fantastic frip thingies.  And they're on the table like bread would be at most other restaurants.  I didn't even feel like eating my brisket sandwich by the time it came out, those things were incredible. Previously: 9) Wings - Quaker Steak & Lube10) Qdoba Queso Burrito/Henry11) TBCGC12) Pizza di Roma Chicken Parm & Pepperoni/Sausage Pizza Honorable Mentions: Casa B's Slice/Breadsticks, Falbo Bro's Chicken Parm Sub, Za's Cajun Alfredo Pasta with Pepperoni and Garlic, Jamie's Cookie Cakes MATCHUPS TO WATCHNebraska QB Taylor Martinez vs. UW Defense

Here's the lowdown on Martinez:
So clearly, UW will try and load up the box, contain Martinez, and force him into throwing situations.  BECAUSE OF THAT, I am confident in predicting that he commits at least 2 turnovers.  The guy just can't zing it in there, has poor pocket presence, and his tosses on options are nightmare-inducing.  Fenelus has been awesome all season, so I'm gonna bank on him to pick off Martinez.  And in less surprising news, I expect Borland to force a fumble, recover a fumble, both, or rip off Martinez's arms and beat him in the head with them while saying, 'Quit hittin' yourself!  Quit hittin' yourself!'  That would be so badass.
UW Special Teams vs. Nebraska Special TeamsI feel so trendy naming the special teams matchup here.  It's like the organic free-range chicken of football.  But it's vital because Nebraska boasts one of the nation's most dangerous returnmen.  And we all saw what happened last year against Arizona State when you're not honest on your kickoff coverage.  Any sort of repeat performance will give Nebraska a HUGE bump in a game where we can't afford to make things easier for them.  Ameer Abdullah is averaging something like 40 yards per return, including a 100 yard explosion.  Has Lerner been working on those directional kickoffs just to help slow Abdullah down?  Possibly. Speaking of Lerner, he cannot, I repeat, CANNOT kick the damn ball out of bounds on kickoffs.  We're playing a one dimensional offense - there's no reason to make things easier for them by giving them a short field.  All reports out of practice are that he has a great leg and absolutely booms it.  But that hasn't translated into success on Saturdays yet.  Hopefully that starts this weekend.  And hopefully French can drill some field goals if he's needed.  Obviously you'd like to just punch it in for a TD every time you start getting down towards the red zone, but what if you get the ball with a minute left in a tie game at your own 20?  Most teams would just try to get in field goal range.  Are we confident French can drill a 43 yarder on national television to win the game?  I'd rather not have it come down to that.
RANDOM MUSIC THAT I'M DIGGING HARD THIS WEEKMuse - StarlightOne of my go-to 'playing the air drums on my leg with an umbrella while walking down the street' songs.  I just really, really wish their songs were easier to cover.  I would have mastered all of them by now.  But their sound is extremely difficult to duplicate.  I guess that's just a sign of a truly talented group. The Offspring - The Kids Aren't AlrightI love everything about this song, except this one little part...

Jenny had a chance, well she really did
Instead she dropped out and had a couple of kids
Mark still lives at home cause he's got no job
He just plays guitar and smokes a lot of pot

WTF?  I would rather do all of those other things.  Except the suicide thing, I guess.  Sorry about that, Jay.  But having some kids?  Chillin' at home, blazing and playing guitar?  Am I supposed to feel bad for these people?  No way.  I had to go OD and die.  Probably on heroin.  In the white house on Langdon with the red door.  It all comes full circle. Lynyrd Skynyrd - FreebirdCONFESSION: When I was a little Badger just getting started on the guitar, I printed out the tab for the Freebird solo, put it in a folder, and wrote 'LIFE GOAL' on the front of it.  I've since learned how to play zero % of the solo.  Wait, this is kinda sad.  Young Brandon was so ambitious!  What happened?  God that solo fucking wails.  Just like Crucial Taunt: 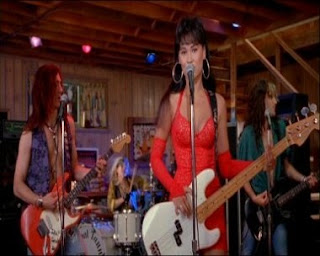 I'm gonna be perfectly honest with you, I think more girls should dress like that.  Or at least go as Cassandra for Halloween.  It's a hot look. THIS WEEK'S GAME IN HAIKU Nebraska likes cornI fucking love corn as wellQuite the dilemmaHold on - fuck that noiseNebraska can eat a dickBucky's gonna roll(Bonus haiku.  I'm feeling very inspired today.) YOUTUBELast night's MLB games were ridiculous.  Deadspin put the Red Sox/O's game and Rays/Yankees game next to each other.  Love it. OK, I'm ready to mail this part in because it's 5:07 pm, I'm still at work, I'm going to Madison tomorrow, and I wanna get drunk tonight.  Damn, I didn't even eat lunch today.  DAMN IT ALL.  BODY MASSAGE. GIVE HIM THE STICK.  something something something something DA BUS RIDAH. WEEKLY 'MADISON THE PUPPY' UPDATE 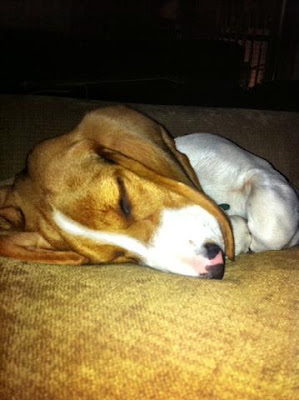 AWWWWWWWWWWWWWWWWWWWWW.  It's remarkable how adorable she is when she's not eating everything and barking at you for no apparent reason.  I've also discovered that she is beyond terrified of the volleyball we kick around the apartment.  That thing makes her go straight into Psycho Pup mode.  Unfortunately, we have not yet discovered an item with the reverse effect. THE BEST OF @SHITGROTHSAYS

The mental imagery here is nothing short of amazing.  Truthfully, I'm struggling to understand the context of this, but it's wildly fun to speculate.

I'm pretty sure he was a jockey in his previous life.  The very first SGS tweet was also about horses: 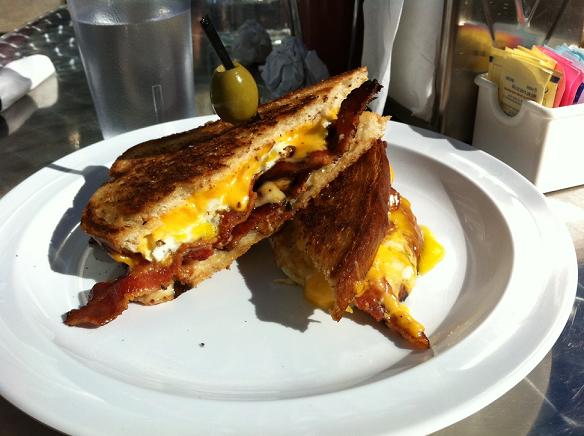 Special Grilled Cheese from Sarks in the Park

Here's something that always kinda bugs me: Once you start adding stuff to a grilled cheese sandwich, doesn't it just become a 'whatever you added with cheese' sandwich?  Like what separates a bacon and egg sandwich with cheese from a grilled cheese with bacon and egg?  I might be nitpicking here, but I think my point is perfectly clear and valid.

Anyway, the special grilled cheese from Sarks is every key ingredient from a dank breakfast, all tossed onto some toast and speared for aesthetic (and awesomeness) purposes.  Personally, I like to open it up and add a little of their hot sauce to it.  No, I've never played around with ranch here - but that's just because I'm usually too hungover to ask.  But Sarks is the ideal place to be when you're trying to fight off the hangover - it's not very pricey, the food is appropriately greasy, and the portions are more than big enough.  I'm a big fan. 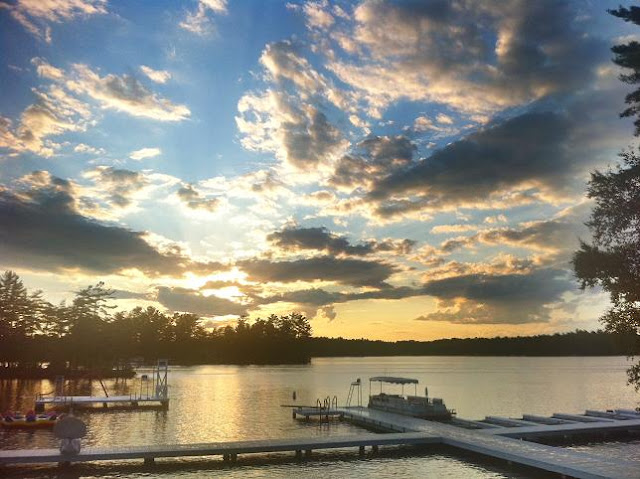 Sun going down over Catfish Lake.

Panorama of the main campus.  I'm pretty sure the sky doesn't get any bluer, the grass any greener.

Pano of the far fields, including the Goldin brothers.  I'm pretty sure their mom should buy this picture and frame it and put it in every room.  I also made them stand still for 2 minutes while I took that pic.