Thinking about a business trip to East Lansing, can't decide if I wanna pull the trigger.  Let's make some pros and cons:

PROS
CONSSuch a touch decision.  BTW, a business trip for a football game means driving there, going to the game, and immediately driving back.  No crashing on couches or grabbing hotel rooms.  Get in, win, get out, boom, done.  Plus, who the fuck do I know that goes to Michigan State? CHICAGO BADGERS:So many options.  You could go to Will's.  You could go to Redmond's.  You could even check out Sully's, which is apparently a new Badger bar and is having some $20 all you can eat/drink special.  Wherever you go, go hard. SHAMELESS PLUGS:Do any of the following interest you?If so, then you should know that I write things.  And multiple readers here write things.  Go and enjoy. WHO/WHERE/WHEN 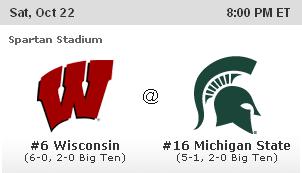 TV: ESPN
WEATHER: LOW 40'S, CLEAR, BLACK JESUS WEATHER SAY SOMETHING NICE ABOUT MICHIGAN STATEWell, for starters, they beat Michigan last week.  So it's that whole 'enemy of my enemy is my friend' situation, except that fuck them they're not my friend.  They're a bunch of assholes who twist facemasks and punch people in the mouth and brag about getting unnecessary roughness penalties.  If you've ever seen the movie Sleepers*, they play exactly like the guards do when they played the kids.  And when they play Wisconsin, it will be just like that game: the kids will win.  Wilson is Rizzo.  Except that Wilson doesn't die.  Poor Rizzo. *Never heard of Sleepers?  How about this for a cast:
Is that the best cast ever in a movie that most people don't know about?  I feel like because the movie involves SPOILER ALERT little boys getting butt-raped, it didn't catch on with the mainstream crew.  Conformists. THE BEST MEALS IN MADISON6) Plaza Burger and Cheesey Potato Things - PlazaIn a city full of great burgers, none fly under the radar quite like a good Plaza Burger.  I feel like people always talk about it, or their parents lived on them when they went to UW, but no one actually GOES to Plaza anymore except to buy Ratatat on the jukebox while talking about their philosophy class.  Well I'm proud to say that I did NEITHER of those things.  Fortunately, I lived close by and was not afraid to indulge.  The burger itself would be pretty good without the sauce, but that liquid crack they pour on the burgers does the trick.  So good.  Always gotta get a side of it for dipping purposes as well. The cheesy potato things really put this meal over the edge, though.  Imagine unreal tater tots laced with cheese.  Because that's exactly what these bad boys were.  After a quick dunk in the plaza sauce, they're perfection in cheesy potato form.  Mmmmm. And speaking of the plaza sauce, they deserve a million points for having 'their' sauce not just be some generic 1000 island ripoff.  Every place's special sauce is the same, but Plaza decided to mix it up.  Can't give them enough credit for that, especially considering how bomber the Plaza sauce is.  The only reason I didn't go there when I was in Madison for the Nebraska game is because they don't serve food late at night on account of all the LCD Soundsystem and Broken Social Scene fawning going on. Previously: 7) Sweet & Sour Chicken (SAUCE ON THE SIDE) - Asian Kitchen8) Buffalo Bites - The City9) Wings - Quaker Steak & Lube10) Qdoba Queso Burrito/Henry11) TBCGC12) Pizza di Roma Chicken Parm & Pepperoni/Sausage Pizza Honorable Mentions: Casa B's Slice/Breadsticks, Falbo Bro's Chicken Parm Sub, Za's Cajun Alfredo Pasta with Pepperoni and Garlic, Jamie's Cookie Cakes MATCH-UPS TO WATCHMSU DE William Gholston vs. UW Offensive Line

So I alluded to it before, but here's the video of what I'm talking about: FACEMASK TWIST (& shout).  PUNCH.  Ridiculous stuff.  And there's no reason to expect it to stop, either.  Here's a choice quote from MSU safety Isaiah Lewis:

"Wisconsin should know we're coming," said Lewis, who clinched the victory over Michigan with a 39-yard interception return for a touchdown. "They have a good offense, and that quarterback (Russell Wilson).

Someone tell this idiot that no one fucks with the (black) Jesus.  To be honest, I'm terrified of Gholston because he has clearly shown that he will do whatever the hell he wants, and his coaches have done NOTHING to stop him.  The worst part?  We recruited this monster.  I don't care how good he is, I'm glad he ended up in that dump of a town.

With their defense gunning for Wilson and trying to hurt him, it's imperative that the UW O-line (and the tight ends, and the backs) play their best game of the year.  Wilson needs to stay healthy, because we've seen enough of the Joe Brennan show to know that he's not really ready to lead this team and make some plays.  If the Big Nasties up front can keep Wilson upright, UW's offense should roll as usual.  We so good.

THURSDAY AFTERNOON UPDATE: Gholston has been suspended for the UW game.  I'm not redoing this section because that requires time and energy, neither of which is in good supply right now.

On the road against a tough defense, it's vital that UW controls the clock a little and runs the ball.  That may seem obvious, but to win this game we will NEED to pound the rock.  Doing so will tire out the D (especially the line) and open up the passing game for Black Jesus to terrorize them.  MBS is quietly performing at a Heisman-level, and after being a non-factor in East Lansing a year ago, there's little doubt that he's itching to get out there and run someone over.  Or run around someone.  Or jump over someone.  I don't know how you stop the kid - he's performing at a stupidly high level.  Look for the O-Line to come out on a mission to open up holes for Badger running backs to power through.  Let's get it in.

RANDOM MUSIC THAT I'M DIGGING HARD THIS WEEKThe Outlaws - Green Grass & High Tides I only know about this song from playing Rock Band, and fuck this song.  It's 30 minutes long and extremely difficult on guitar and drums.  I actually enjoy listening to it, and it was in heavy rotation when I was playing the game, but I got real sick of failing out all the time.  It doesn't help that I'm just not very good at Rock Band.  Womp womp. Jimmy Eat World - Lucky Denver MintI'm eternally fascinated by the drum beat at the beginning because I think it's awesome, but I know I would butcher the shit out of it over and over if I tried learning it on the actual drums.  Or maybe even on the Rock Band drums. OutKast - Rosa ParksEven though I'm white, I'm still allowed to like this song, right?  I hope so, because it's one of my favorite OutKast songs (up there with Whole World, Roses, Ms. Jackson and Hey Ya!).  OutKast is kinda the shit. Mr. Big - To Be With YouBecause I said so.PS - That music video is so music video-y it hurts. THIS WEEK'S GAME IN HAIKU Revenge for last yearYou will not stop this offenseCan't stop destinyYOUTUBEIt's safe to say that I didn't do anything nearly as cool as this with my Hot Wheels.  What's wrong with just rocking that 'map on a carpet' world? 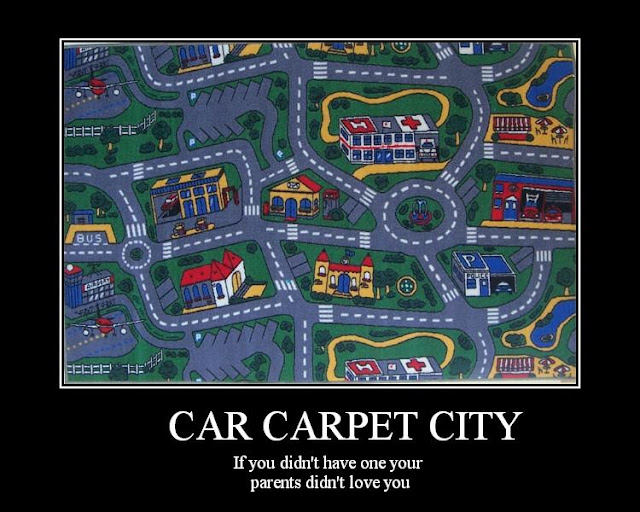 
And I don't care what anyone says, but that is going on YouTube

You got that right.
Old video, but apparently everyone in the world hasn't seen it yet.  I'd like to remedy that.  Gotta watch all the way through to the end. 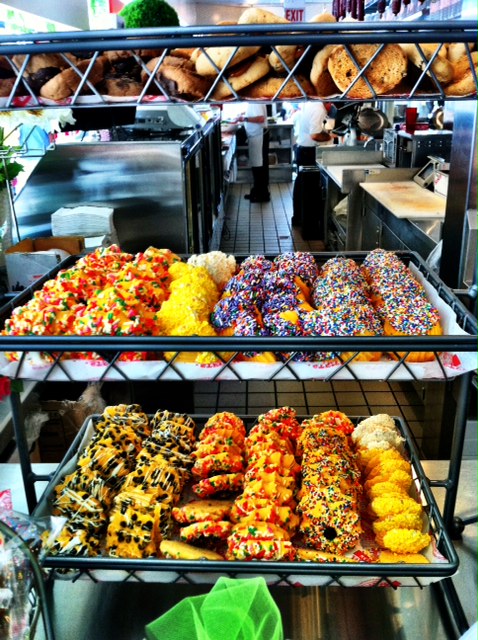 CHANGE OF PACE.  This is the cookie rack* from Steve's Deli in River North.  Amazing stuff here.  I don't know what these types of cookies are called, I just know that I fucking LOVE them and could eat them by the bucket.  Cookies would do really well if they were served in a bucket. *What comes in a rack and ISN'T great?  Off the top of my head, I love racks of:Well, that was fun. 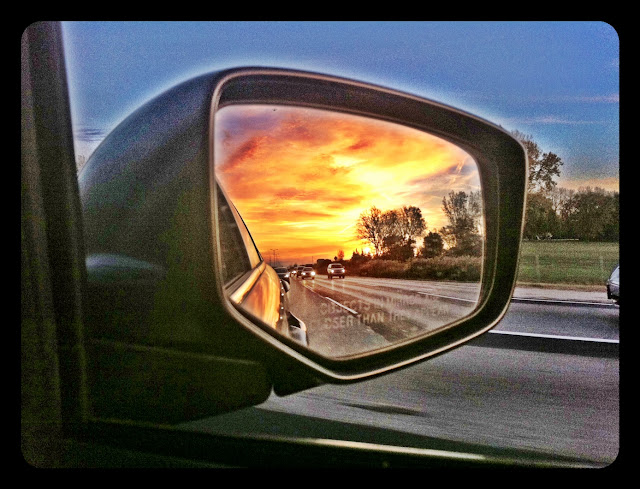 Man, I'm a fucking artist.  There's no reason I don't have my own exhibit at any of the splendid museums in Chicago.  I took this one on the way back from the OSU game last year, which is great because it just wasn't enough that I went to Madison, beat the #1 team in the country, rushed the field and got hammered.  Nope.  I had to catch a phenomenal sunset on the way home.  To quote GLC, I was busting, Jerry.  BUSTING! MY FAVORITE HIPSTER 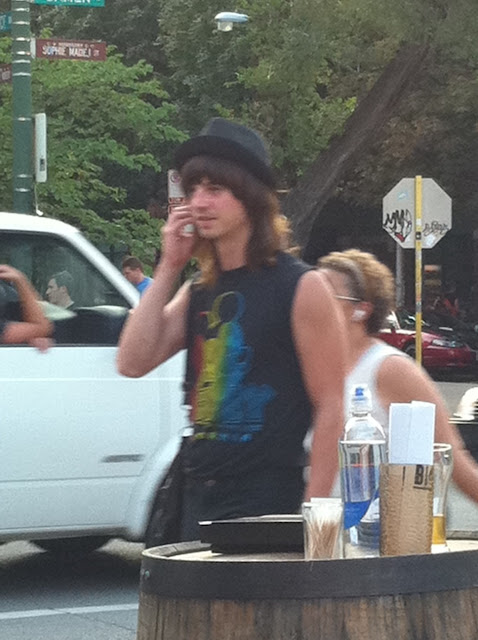 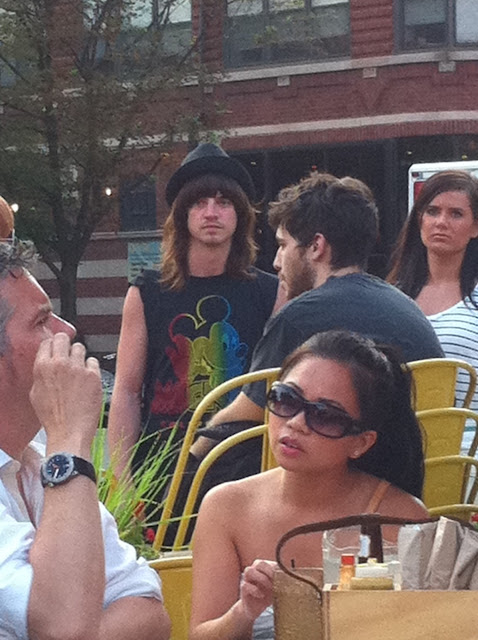 Friends don't let friends be hipsters.  Seriously, the hair, the hat, the shirt... it's all just so hipster that I feel like listening to some Ra Ra Riot and Scenic Square while browsing the frames section at the organic free-range eyewear store in Wicker Park. PREDICTION CITY I'll be perfectly honest here: I started to let doubt creep in.  Monday night into Tuesday I was seriously thinking that we might lose this game.  Then I watched the amazing, must-watch ESPN Depth Chart show on UW.  ALL DOUBTS ARE FOREVER ERASED.  This is a team of destiny (you might say the haiku this week was FORESHADOWING to my prediction).  If you listen to everything the coaches and players are saying, it's clear they know this is the year to make it happen.  The pieces are falling in place.  And LEST WE FORGET, we lost in East Lansing last year.  The seniors have NEVER won there.  Trust me when I tell you, the underclassmen are more than aware.  As is Black Jesus, and in Black Jesus I Trust.  Lock it up, championship, LET'S go!  The pick: WISCONSIN 38, MICHIGAN STATE 23ON WISCONSIN
Posted by Schwa at 7:27 PM