I spent a good portion of the drive back from East Lansing trying to decide how I was gonna write about that debacle.  I had a lot of ideas: A giant paint cartoon breaking down the trip, homemade animated GIF's of the word 'fuck', recording a video of myself crying and sending it out to everyone... you name it, I thought of it.  But in the end, it's not worth the time.  We lost.  That ain't changing.  Whether or not there was a missed false start, indisputable evidence to overturn the last play, or anything else of the sort doesn't really matter.  The ultimate goal for this team - the lofty expectations - will not be met.  And there are two ways to look at that:

Personally, I'm trying my absolute hardest to embrace the latter.  All those great recruits aren't de-committing because we lost on a last second hail mary to a top 15 team on the road.  We still control our own destiny for winning our division and winning the first ever Big 10 Championship Game.  These are good things.  Back to back conference championships and Rose Bowl appearances is a DAMN good achievement.  But the dream of winning a National Championship will have to be put on hold for now.  Just hopefully not for too long. FUCK.PS - Last four possessions of the first half:

Interception, safety, blocked field goal, blocked punt recovered for a touchdown.  That, my friends, is no recipe for success on the road.CHICAGO BADGERS: I heard Sully's was a good time last week - I'm sure they're doing something again this weekend.  This is also the only Badger game where I'll approve of people not wearing red.  I encourage you to wake up and put your Halloween costume on Friday morning and not take it off until Sunday night.  That's good hustle. SHAMELESS PLUGS: I tumble for you.(You should have that scene in Billy Madison playing in your head right now.  Or you didn't have a childhood.) WHO/WHERE/WHEN 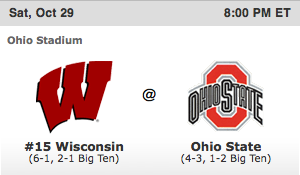 TV: ESPN
WEATHER: 40'S AND SOME RAIN, MEH. SAY SOMETHING NICE ABOUT OHIO STATEStay with me here, but they are really, REALLY bad at cheating.  Why is that a good thing?  Because if you suck at cheating, you get caught.  And then we all get to spend forever and ever making fun of them for all the shady tattoo and car deals that went down.  Plus, we get gems like this from the OSU president:


We are the poster child for compliance, and whenever we discover a possible infraction, we resolve and report it to the NCAA, no matter how minor the violation.

I spent a good 4-5 minutes just sitting and laughing after I heard that quote.  That's like saying I'm the poster child for hating chocolate milk.  ABSURD.

So, on behalf of everyone with at least half of a brain, thank you Ohio State for just doing you.  You bring us more unintentional joy than you can possibly imagine, and for that, we are eternally grateful.

PS - You suck balls and deserved the death penalty.

PPS - For those of you that don't know what I'm referring to when I say 'death penalty', just know that I'm not a murderous monster.  Read this and feel better.

PPPS - This Wikipedia page needs much more information added, including an 'Appearances in Popular Culture' section.

THE BEST MEALS IN MADISON
5) Cripple Creek - NO FUCKING TOMATO - Silver Mine Subs
LOVE.  And before I even begin describing everything that is amazing about the Cripple Creek, I have to quote Mr. Magary one more time, because he recently addressed something that I've been thinking for a LONG time:

They always fall out of the sandwich, which is annoying. I don't know why tomatoes are always given an automatic berth in any sandwich I order. I shouldn't have to ask for my sandwich to NOT have tomato and mayo. They are interlopers. I'll decide what toppings I deem worthy, fuck you very much.

Amen.  I'm also extremely weird with tomatoes:Love:Tolerate:Despise:Is there any logic to that?  On the way to Michigan, we stopped at a Wendy's real quick and I CLEARLY specified that I wanted a PLAIN JBC (junior bacon cheeseburger).  I took one bite when we got on the road and just let out a big 'ol 'WHAT THE FUCK IS THIS NOISE.'  Inside was a huge slice of tomato and a metric shit ton of mayo.  You might think, based on my endless love for ranch, that I'm a mayo fan as well.  HELL NO.  Mayo grosses me out, and since it's unhealthy, I feel like I'm taking the high road when I decline.  'No, no mayo for me, trying to watch what I eat... but can I get 2 sides of ranch for the fries please?'  Sometimes I think I'm considerably smarter than most people. But back to the Cripple Creek.  If you step back and look at it, it really violates two of my Fast Food Sandwich Principles: Chicken and not toasted.  Ever get chicken on a sub from Subway or Quizno's?  There's no question that's grade F quality meat.  I have no idea why Taco Bell gets assaulted for its beef when the sub shops are peddling mashed up chicken uterus to us.  Yet, I find myself thoroughly enjoying the chicken at Silver Mine.  I assume because they're from Colorado, and Colorado is really health-conscious, that they put a little effort into finding the ride balance of quality/cost for the chicken.  So I'm OK with it. The fact that it's not toasted is also overlooked due to the chicken being warm.  This trickles down to everything else once the sub is wrapped up, creating wholly satisfactory experience.  Chicken, bacon, ranch and lettuce all working together to make me one happy Badger.  Mmmmmm. PS - Unbelievable chocolate chunk cookies.  What's up with sub places having the dankest cookies?  Subway, Quizno's, Silver Mine - I could just go to town on the cookies at all of these places.
Previously: 6) Plaza Burger and Cheddar Munchers - The Plaza7) Sweet & Sour Chicken (SAUCE ON THE SIDE) - Asian Kitchen8) Buffalo Bites - The City9) Wings - Quaker Steak & Lube10) Qdoba Queso Burrito/Henry 11) TBCGC12) Pizza di Roma Chicken Parm & Pepperoni/Sausage Pizza Honorable Mentions: Casa B's Slice/Breadsticks, Falbo Bro's Chicken Parm Sub, Za's Cajun Alfredo Pasta with Pepperoni and Garlic, Jamie's Cookie Cakes MATCH-UP TO WATCHOSU RB Boom Herron vs. UW Defense

Before Herron's return from suspension, OSU's offense was... terrible.  Zero dimensional.  No passing game, no rushing game, just not very good.  But with Herron back in the mix, the Buckeyes finally have a weapon to lean on when they have the ball.  Because they sure as shit can't pass: When they beat Illinois, they completed ONE pass the entire game.  So it should go without saying that UW will need to focus on shutting Herron down while forcing OSU to throw the ball.  Do that, and I have a difficult time envisioning the Buckeyes moving the ball effectively against Wisconsin's defense.


RANDOM MUSIC THAT I'M DIGGING HARD THIS WEEKThe White Stripes - Seven Nation Army Creating a sound with a lot of depth despite only using minimal instruments is not an easy feat - but they do a damn good job of it.  Plus, HUGE fan of female drummers: 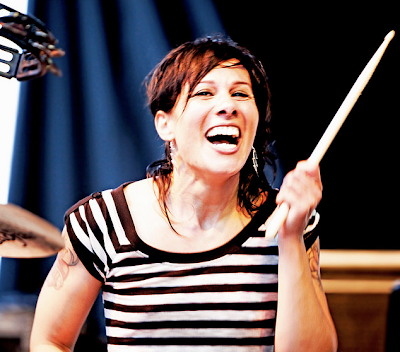 Kim, I freaking love you.
Dexie's Midnight Runners - Come On Eileen So mad I can't find the Tommy Boy car montage scene.  That scene is CLASSIC.  Ugh.Ludacris - Blueberry Yum YumI don't condone illicit materials.  But if I did, I would absolutely watch this video while partaking in such activities. THIS WEEK'S GAME IN HAIKU Still devastatedBut it is time to move onFuck up OSUYOUTUBEThis is one of the most impressive photographic achievements I've ever seen.  I don't even know what devices and techniques are involved in making it, I just know that it looks incredible and I'm extremely jealous. How have I never thought of this?This 9 year old kid is KILLING it at his school dance.  And his costume is amazing.PS - Since when did 9 year olds have school dances? PPS - Since when did 9 year olds have ravers? 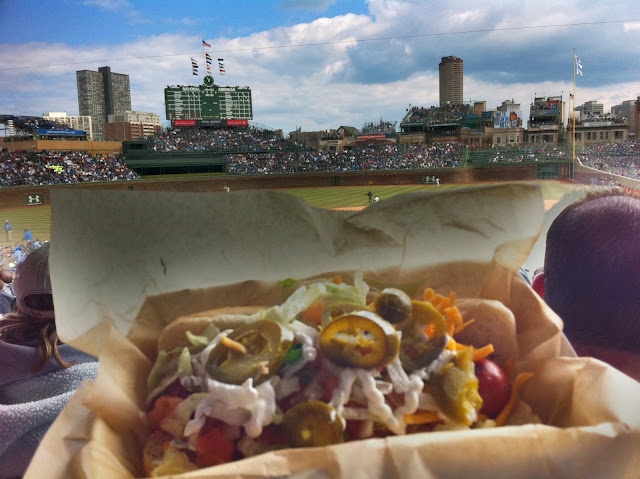 Taco dog from Wrigley.  For those of you keeping score at home, that's a hot dog with ground beef, cheese, lettuce, sour cream, pico and jalapenos (which I had to request, obvs).  Just an incredible conglomeration of taste, and surprisingly not that messy.  Ultimate ballpark food. Did it help that it was a gorgeous day?  Yes.Did it help that the Cubs won?  Nah, not really.  The Cubs were TERRIBLE last season.  Just embarrassingly bad.  Bleh. PREDICTION CITY Bounce back.  Beat Ohio State.  The pick:WISCONSIN 35, OHIO STATE 17ON WISCONSIN
Posted by Schwa at 1:29 AM