Well, the end of that Minnesota game was FUN, wasn't it?  With 7:41 left in the game, Jared Berggren hit a jumper to make it 51-41 UW.  Here's the rest of regulation for the Badgers:

That's absolutely atrocious.  Fortunately, we made a bajillion free throws in the extra period and held on for a HUGE road victory.  Ready for something that still bottles the mind?  The Badgers control their own destiny in the Big Ten.  That's right.  Win out and UW is guaranteed at least a share of the title.  Of course, the odds of that happening are pretty freaking slim considering we travel to East Lansing this week and Columbus a little later on this month.  But still, it's pretty damn incredible that we're still in this title hunt considering:

UGH.  At least MSU is a good team.  But losing at home to Iowa is one of those things that just makes you wanna put your fist through a wall.*  Much worse than the year we lost to One Of The Directional Dakota States at home.  GROSS.


PS - As a result of our incredible ability to win on the road this year, my new favorite tag is definitely #roadwarriors


*One of my favorite episodes, and possibly Jim's best prank.  Although I still don't really get what Pam was supposed to be doing when she was drinking water in front of the door.  Would people be so shocked by her beauty that they wouldn't notice the 6-foot-4 guy standing on a counter digging around in the ceiling behind her?  TWEEDLEY DEE, DEE DEE DEE DEEEEE 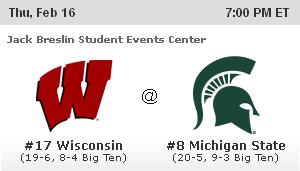 This is a big one.

Is Ryan Evans actually good?  Is it time to start accepting that?  I feel like I was very ready to write him off last year.  The guy has absolutely ZERO natural basketball instinct.  Basketball IQ?  I imagine Evans' mom having to 'convince' Bo Ryan to let him come to Wisconsin a la Forrest Gump's mom with the principal.  Jumper?  Flat and disgusting.  But something weird happened this year... Evans started making not-terrible plays.  He kinda-started finishing around the hoop.  A few of those ugly jumpers went down.  Most importantly, he's been AGGRESSIVE on the offensive end during a season in which anyone not named 'Taylor' has been beyond passive.  Not to mention, Ryan has played some of the best defense on the entire team.  He will most likely draw the assignment of slowing down...

Draymond Green.  Monster.  The Big Ten POY race is essentially down to him and Sullinger (more on him later).  And stop me if you've heard this one before: DRAYMOND GREEN IS A GREAT LEADER AND SUCH A GOOD INTERVIEW, I WISH ALL COLLEGE HOOPERS WERE MORE LIKE DRAYMOND GREEN.  I think everyone gets the point by now.  Unfortunately for the rest of the B1G, he's also one hell of a player.  15/10 a game with respectable percentages everywhere.  And he dropped a cool 18 and 14 on UW in the Kohl Center.  A big emphasis for the Badgers will be competing on the glass with the Spartans, and that starts and ends with Dray-Dray.  Unrelated: I think Draymond is a terrible name.

So I ended up getting a ticket to see The Darkness last Saturday, and these guys opened for them.  If the goal was to find an opener just made all sorts of sense based on the headliner, then the tour organizer absolutely NAILED it.  They also provided one of the highlights of the show:

Random Guy Behind Us: Play a fucking song!


Foxy Shazam Lead Singer: Who said that?  Raise your hand!

Random Guy Behind Us raises his hand
Foxy Shazam Lead Singer: You know the difference between you and me?  You're looking up at me, and I'm looking down at you!

The place went wild, they finished the song, and the guy most likely felt like a jackass.


The Darkness - Get Your Hands Off My Woman

In unsurprising news, The Darkness absolutely KILLED it.  They played EVERY song from their first album, and they did it while the lead singer was diving into the crowd from 30 feet up and doing extended guitar solos while meandering through the crowd on the shoulders of a security guard: That is the very definition of rock and roll.  I guess they're doing another tour in the summer, and this is me guaranteeing I'll be seeing them if they come to Milwaukee or Chicago.

PS - I take it back, this is the very definition of rock and roll: 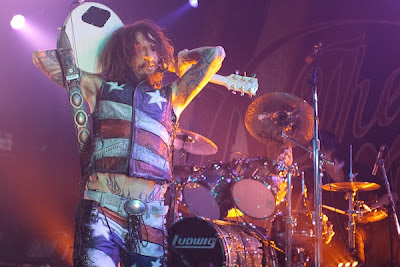 I remember playing 'Ode To Joy' behind my head when I was a kid and thinking I was on my way to STARDOM.  Didn't quite work out like that.

I have a serious love/hate relationship with this song.  Love: It's an amazing song, and I had one of the lyrics in my AIM profile for YEARS (old school).  Hate: To play it, you have to tune your guitar in 9 different directions, making me snap a string last week.  #firstworldproblems

We are the road warriors...

Both on the court and off it

And also in it?

It might just be the nerd in me talking, but I found this video of the flights in/out of Indy Super Bowl weekend FASCINATING.  It looks like something out of an 80's action movie.  I think it's the same system they used to hack into the vault in Die Hard.


I have a new rule: Every time* I find someone* that hasn't seen this video, I will post it here under the belief that there are still some of you out there that are missing out on one of my all-time favorites.  This also doubles as an excuse to use an old video when I don't have a lot of new hotness to throw out here.

PS - Only 815,000 views?  Is everyone else on the internet intentionally avoiding this masterpiece?  ALL MUST KNOW ABOUT JOBY.


I don't think I ever really thought about how cool normal (and non-normal) things could look when you just reverse them.  There's really one glaring omission.  351!  351!  ROVER SIT!  HUT!  HUT!

*A few people have mentioned it to me randomly, but I have a hard time knowing which words are really one word vs. two words.  'Everytime' sounded perfectly reasonable to me until Google gave it the red squiggly line treatment.  Like, you're gonna tell me that 'everytime' isn't a word, but 'squiggly' is?  Also, whoever invented the red squiggly line was clearly a dick.  There has to be a nicer, less offensive way to tell you that you suck at spelling.  Might be time for a new billion dollar business idea for me.

SO I CAUGHT THE END OF THE WESTMINSTER DOG SHOW

And let me tell you: There needs to be a formal investigation into this system.  Because in no way, shape or form should this thing be deemed Best In Show: 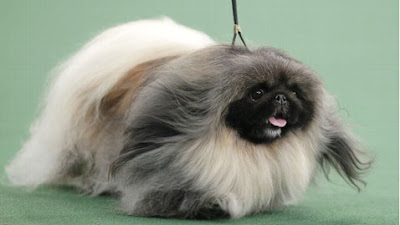 Are you kidding me?  That's not even a dog.  That's a cat with a wig and a perm.  I actually don't know what a perm is, but I think it's the one that poofs your hair up?  Right?  Regardless, this was an abomination.  Remember when that judge at the Olympics was all corrupt and screwed over the hot Canadian chick?*  This is like that, times a million, and a whole lot worse.  For my money, it didn't get better than the dalmatian: 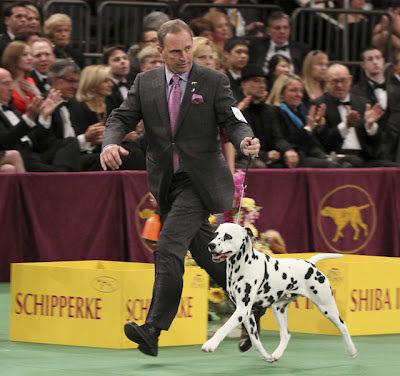 Full disclaimer: I don't really care for dalmatians.  You always hear how they're terrible with kids, Cruella Deville, all that terrible stuff.  BUT THIS DALMATIAN WAS IMMACULATE.  Ugh.

My pick for second place/runner-up: 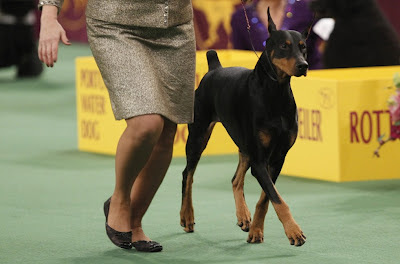 THE DOBERMAN.  I just think this looks like a champion of a dog.  The type of dog you could go to WAR with.

Finally, what's the deal with terriers?  Are they all this bizarre looking? 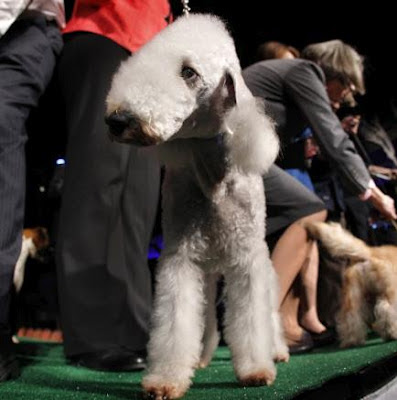 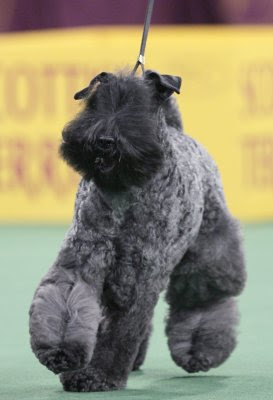 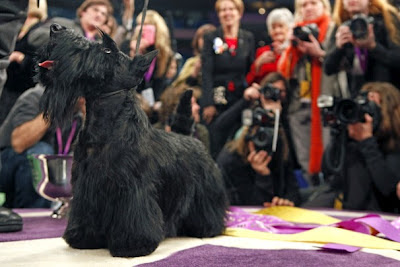 I didn't know dogs had facial hair.  Like, yeah, they get whiskers, but weirdo terrier #1 up there has a full on SNOUT BEARD.  And WTF, does that second dog even have a face?  How does it see?  The third one there could give the dad from The OC a run for his money in the 'Good Lord Look At Those Eyebrows' category: 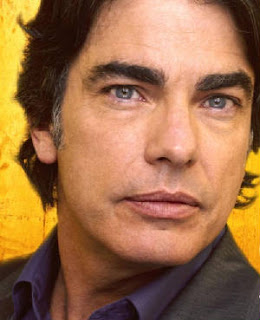 I'm so confused, and I will definitely never be getting a terrier.

PS - I feel like I've said some questionably offensive things writing these previews over the last few years, but I just get the feeling that I deeply offended someone by going hard at terriers. 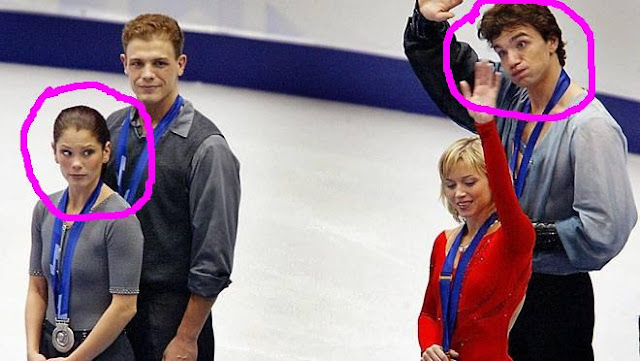 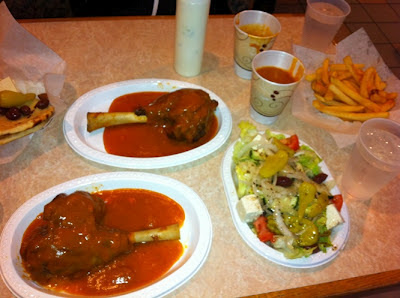 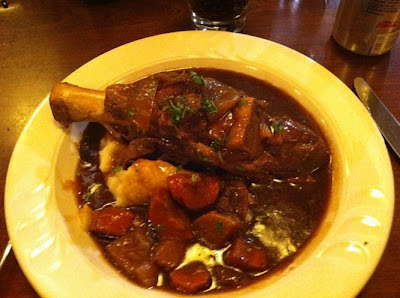 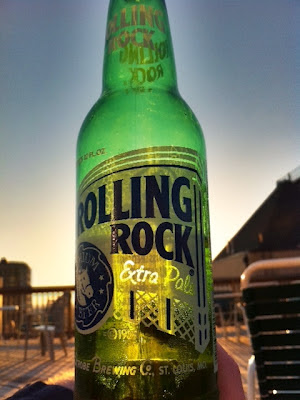 RANDOM PICTURES I ENJOYED THIS WEEK 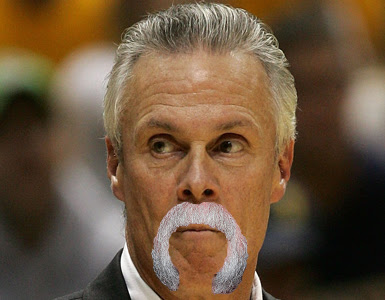 There's litrally no doubt in my mind right now that Bo needs to grow out this 'stache.  It couldn't be more 'Bo' if it tried.  I feel like it kinda accentuates his standard sideline crouch?  That makes perfect sense in my head. 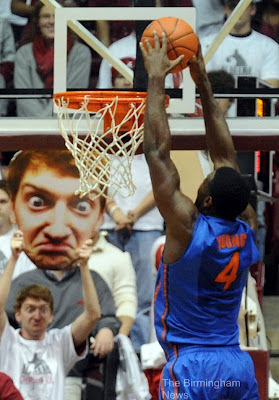 Genius.  Teams should hire that kid to sit under the opposing team's basket in every big game.  Nevermind the fact that the other team is dunking in his grill piece in the pic.  It's still awesome.

IDK.  I'm just not feelin' this one.  I think Izzo will have his guys fired up at the idea of sweeping us for probably the first time in the history of the world.  And they're probably still riding high after knocking off the Buckeyes in Columbus.  If this is one of those games where we struggle to break 40, I really won't be surprised.  Prove me wrong, Road Warriors.  The Pick:


And what's the best way to get over a frustrating road loss?  Come home to play Penn State!  I know it was a tough, hard-fought win in the first meeting, but I'm having a very difficult time envisioning a Bo Ryan coached team struggle twice in one season with a team this bad.  They'll study the film, learn from their mistakes, and take care of business.  The Pick: