Well.  That game sucked.  Here's what I saw:

THE GOOD
THE BAD
THE UGLY
I have no idea why I'm still talking about this game.  Any outside chance at winning the B1G died with the final buzzer in Madison on Saturday.  Now it's about finishing top 4 in the conference and making a run in March.  Both of which are very possible and very doable.  Somehow, this team has done it's best damage away from home.  Maybe this is the Bo Ryan team that just catches fire at the exact right time.  Impossible to know right now, but here's to hoping it is. 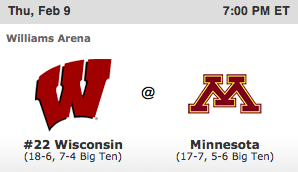 What happened to Brust's stroke?  I know he wasn't feeling well before the Penn State game, and the results would seem to indicate that there's no fluke here: 0-8 in the last two games from downtown.  But you could go back even further: 5 for his last 23.  That's just not gonna get it done for a guy that is really only out there BECAUSE he can shoot.  Shooting, in general, has been this team's biggest issue all season.  When the shots have been falling, they've been very, very hard to beat.  But as you saw on Saturday, when this team isn't draining 'em, not only are they a pain in the ass to watch as a fan, but they have very slim chances of pulling out a tough win.  Early on this year, I really thought Brust was gonna be that kid that could step in off the bench and knock a few down to get the rest of the team going.  So far, that hasn't really panned out.  And it's not like he can make up that value on the defensive end.  Oh yeah, have you ever seen a fadeaway jumper get blocked so easily?  Terrifying.  Need him to put some down going forward - and Minnesota would be a LOVELY place to start.

What goes on in this program?  I can't even keep track of who's on the Minnesota roster with all the transfers, suspensions, and injuries they've accumulated in the last few years.  Their best player (Trevor Mbakwe) is out with a torn ACL (he was also suspended an entire year after transferring form Marquette because of a felony assault charge).  And then there's all of this:


In-season drama has become the norm for Tubby Smith's program. In his third season with the Gophers, star recruit Royce White transferred to Iowa State before he ever competed for the Gophers.
Al Nolen, his starting point guard the last two seasons, missed most of the 2009-10 campaign due to academic issues and the bulk of last year with a foot injury. And standout combo guard Devoe Joseph transferred to Oregon in January.

I'm always on the prowl for fresh new dance moves to bust out on the weekends... and I think I've just stumbled upon a GOLD MINE.  This video is highly entertaining.  Oh, I suppose the song isn't half-bad either.

PS - My suite-mate freshman year convinced me to download a bunch of their music.  I've had it in my iTunes library for about 7 years now.  Have NEVER listened to it.  Maybe it's time to get on that?  Am I missing out here?

PPS - I like any song that reminds me of Jock Jams.


Gotye (ft. Kimbra) - Sombody That I Used To Know

This song inspired my latest billion dollar app idea - I want an app that automatically notifies me of ANY video on YouTube that amasses 10 million views.  My thinking is that anything with 10 million views is at LEAST worth watching once.  I know that there are a lot of idiots out there in the world, and internet access isn't quite as hard to come across as it used to be.  But 10 MILLION views is serious business.  The music video for this song has 63 million views.


The Darkness - Nothing's Gonna Stop Us

Ohhhhhhh yeahhhhhhhhh!  SO happy to see the Darkness are back and shredding.  It's tough to pin down the exact reason I love them so much: They seem like a living anachronism, wailing/shredding guitars, catchy hooks, one of the most gifted singers in the world, etc.  So many good things going on here.  As a result, I was more than ecstatic to hear that they have a new album coming out.

They're playing a show 3 blocks from my apartment THIS Saturday... and I'm just finding out about this now?  And it's sold out?  OF COURSE it's sold out.  UGH.  Someone be my hero and find me a ticket.  PLEASE.

Another band that I feel like I should like, but for one reason or another it just hasn't transpired yet.  Didn't stop me from enjoying this song when we were jamming last week.  Few things can stop me from having a good time while jamming.

Almost for sure have used this song before, but I don't care.  It's one of the RARE Weezer songs written after 1996 that I absolutely love.  I've been known to call it a modern day Say It Ain't So simply because the structure of the song reminds me of SIAS in many ways.  Also, Rivers just belts it out on this track.

Dumbest court in the Big Ten

YOU SUCK AT ALL SPORTS


(I think I was dangerously close to attending Minnesota.  Good thing someone in the UW admissions office recognized my POTENTIAL.)

The first time I saw this monster 7-foot-5 kid in high school dunking in everyone's grill-piece, I couldn't help but think that we need someone to shut him DOWN.  Fortunately, I know just the kid: 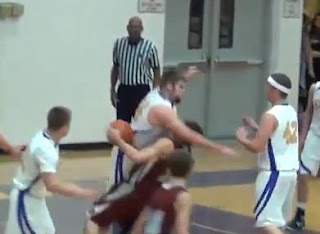 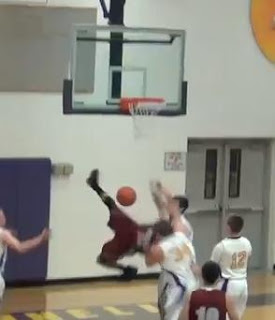 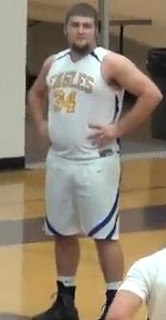 I'd love to see Mamadou Ndiaye try and put one down when Combat Boots is patrolling the paint.  This would be a high school game I would pay to see.


I don't think there's anything quite as satisfying as a well-thrown snowball.  This was also much better after I re-watched it with the sound on.  BROKEN GLASS.


I thoroughly enjoy these Jimmy Kimmel 'challenge' videos.  The latest one?  'Unplug The TV During The Super Bowl'.  Downright cruel, but pretty hilarious.

PS - I got an email right when one of the guys was dropping an f-bomb.  I have since concluded that the default Outlook 'message received' noise is a PERFECT substitute for the standard 'bleep' noise. 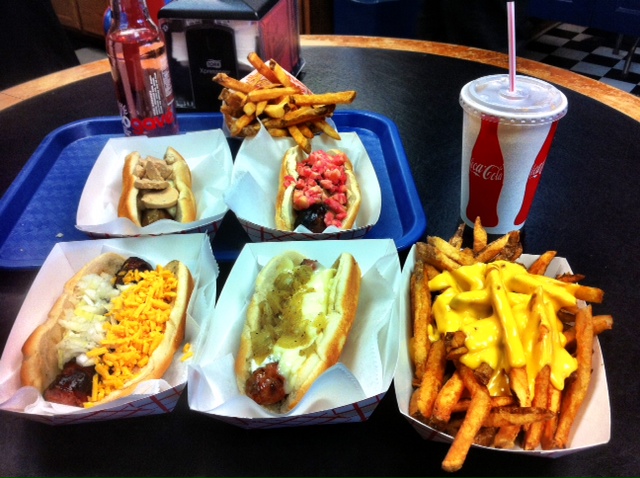 I took the day after the Super Bowl off from work, anticipating a raging hangover from celebrating a Packers victory.  Since that didn't really pan out, I decided to use my day to hit up Hot Doug's, which is usually a difficult task considering its limited hours and long lines.  But there were no issues Monday, however, as we encountered ZERO line.  I opted for the bacon sausage with creme fraiche, caramelized onions and St. Paulin cheese off the specials menu (in the middle on the bottom).  Absolutely delicious.  I've really never had a bad experience there - one of my favorite places in the city for a special meal. 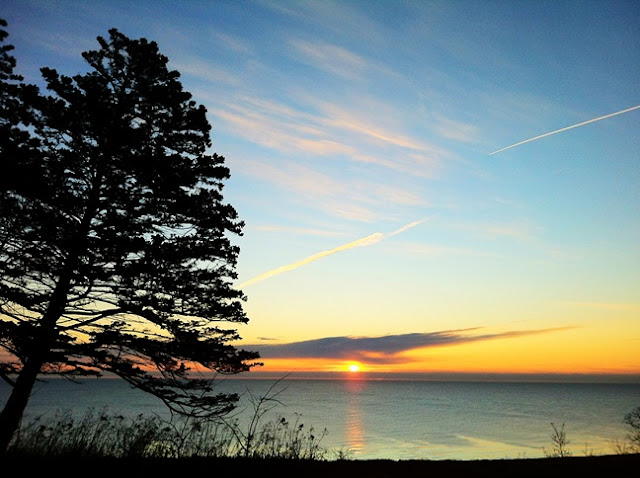 Another Flood Lake Michigan special.  I should also clarify that I never had to actually google which way Lake Michigan was.  That's crazy talk. 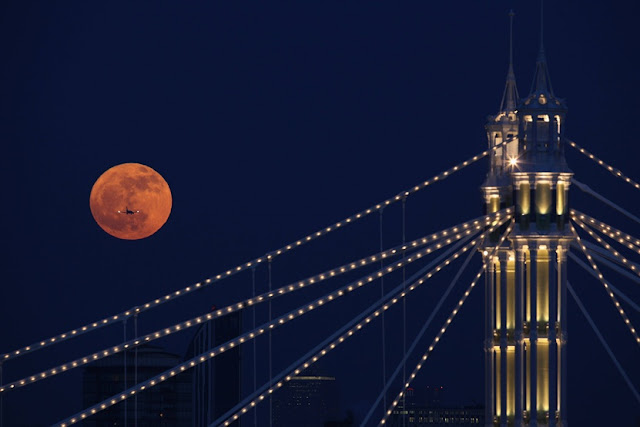 Full moon in London.  It kinda sucks knowing I'll never take a picture 1/1,000th as cool as this.  Unless encased meats and cheese fries are cooler than airplanes flying into blood-orange full moons above a badass London backdrop?  Yeah?  Yeah.  Nah.

RANDOM PICTURES THAT MADE ME LAUGH THIS WEEK 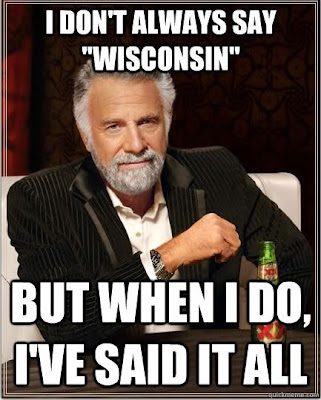 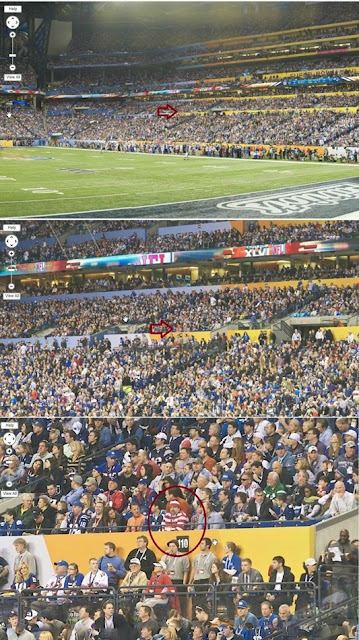 Someone used the FanCam thingy and found freaking WALDO at the Super Bowl.  That's amazing.  Is this a thing?  It should be.  Every major sporting event should have a FanCap and one designated Waldo hiding somewhere in the crowd.  Between this and my 10 million views on YouTube app, I'd say I'm churning out billion dollar ideas left and right these days.

Just impossible these days.  Does the team that barely got by Penn State and couldn't hit a shot to save their lives against Ohio State show up in Minnesota?  Or does the team that somehow won AT Purdue and AT Illinois make an appearance?  If you can sit here and confidently answer that question, then you might as well take your talents to Vegas.  I guess I'm just gonna hope that Taylor, Berggren and Bruiser all step up in their return to their homeland.  Maybe Brust finds his stroke.  Perhaps Gasser decides to be a factor offensively.  Who knows.  This team is frustrating, but I think they've got another big road win in them.  The Pick: