Why do I keep hearing that Indiana controls their own destiny to make the Rose Bowl? Don't we control their destiny? Last time I checked, losing to Indiana in football is-

Hold on. Scratch all of that. News just broke that Curt Phillips will be starting at quarterback for Wisconsin this weekend. Here's your up-to-the-minute primer on Curt Phillips:
That is literally everything you've ever need to know about him. I find it very difficult to believe that he'll be moving well enough to make up for average at best arm strength and a complete lack of game experience. But then again... he's not DOB. And DOB has looked miserable in just about every game he's played in this year. I'm well aware that the offensive line hasn't done him any favors, but when they break down for Stave, he takes a 2 yard sack. When they break down for DOB, he loses 30 yards. You can't have plays like that and expect to win, let alone keep your job.

And with that, enter: Curt Phillips. I should point out that I sincerely admire that he's battled back from 3 ACL injuries. That's incredibly impressive, and at the very least any questions about his work ethic or desire to play should be answered. But I have a hard time envisioning this team doing anything on the offensive side of the ball if we can't push around the other team's front 7. Can we do that against IU? Jesus Christ I hope so. But with OSU and PSU looming (and a potential B1G Championship Game), a 1-3 finish to the season sounds about right. Depression level: MAXIMUM.

CHICAGO BADGERS: 11 am game. Come up with your list of excuses now, send them to me, and I'll promptly respond with reasons you're wrong. Get up, drink and enjoy the day. If you haven't noticed, the gamedays are disappearing RAPIDLY. We've hit basketball season, and that means time is running out on football. SAVOR THE FLAVOR

SHAMELESS PLUG: Once again, I'm gonna ask to please consider tossing a few bucks to my Movember efforts. I'd love to have a little more there before I try shaking down my company. You can make this a tax write-off, whatever an actual write-off even is. Any amount helps. Thanks.

Onward... to a football game involving Indiana with huge implications for both teams. Never thought that would be possible in our lifetimes. Seriously. Before this season I woulda put a lot of money on the US electing a lesbian president before Indiana sniffing the B1G Championship Game. I am a terrible gambler. 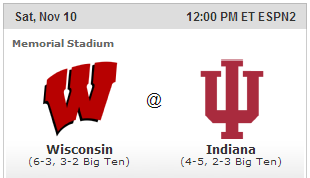 TV: ABC OR THE ESPNS, I HAVE NO IDEA WHY, THIS GAME SHOULDA BEEN SCHEDULED FOR FX YEARS AGO
WEATHER: 60'S AND SOME SUN, WHY DOES INDIANA ALWAYS SEEM LIKE A TROPICAL PARADISE COMPARED TO MADISON/MILWAUKEE/CHICAGO? I FEEL LIKE IT'S 20 MILES AWAY, SHOULDN'T WE HAVE THE SAME CLIMATE?

But I do wonder if anyone's ever burn noticed someone by saying Hoosier daddy? That's exceedingly clever. Trademark that shit.

Graduating from Indiana University in 1974, he is the only person known to hold a college degree in enigmatology, the study of puzzles. Shortz achieved this feat by designing his own curriculum through Indiana University's Individualized Major Program. He also earned a Juris Doctor degree from the University of Virginia School of Law (1977), though he forewent the bar exam and began a career in puzzles instead.

Shortz provided the puzzle clues which The Riddler (Jim Carrey) leaves for Batman (Val Kilmer) in the film Batman Forever.

He says that his favorite crossword of all time is the Election Day crossword of 5 November 1996, designed by Jeremiah Farrell. It had two correct solutions with the same set of clues, one saying that the "Lead story in tomorrow's newspaper (!)" would be "BOB DOLE ELECTED", and the other correct solution saying "CLINTON ELECTED". 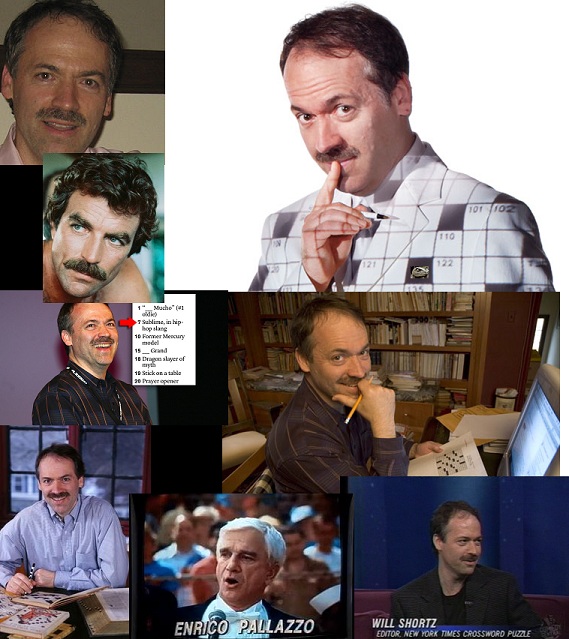 While in graduate school, he taught at two universities, but left before completing a PhD in order to take a job in finance and later worked as the research director of a Chicago futures and options firm. In 1996, he and two partners founded Bomis, a male-oriented web portal featuring entertainment and adult content. The company would provide the initial funding for the peer-reviewed free encyclopedia Nupedia (2000–2003) and its successor, Wikipedia. 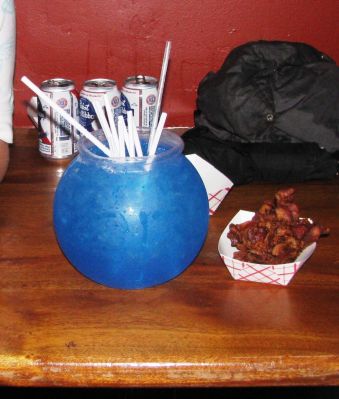 It may not be the best drink in Madison, but one could certainly make the argument that the Fishbowl is the most iconic drink in Madison. It's where people go when they turn 21*. It's what Scott Van Pelt talks about when he's singing UW's praises on his show. Quite simply, it is the quintessential Madison drink.

I know, I know. You might be expecting me to rank the colors, since yeah, I agree, that seems like something I'd do. But I honestly do not have much of a preference when it comes to Fishbowls. Red (obvious) and purple (twice as obvious, such a badass color) are my go-to's, but I'm pretty sure I would fail a blind taste test every single time. Those things are shot with enough booze and I'm usually hammered enough to not care what color my Fishbowl is.

You know what else is weird? It's very, VERY difficult to suck through a cluster of 9 straws at once. I have no idea what science is at play, but every time I get in front of a Fishbowl I'm all 'GIVE ME 14 STRAWS AND LOOK THE FUCK OUT'. After three seconds I'm wheezing for air. Maybe it's like how in middle school they made us breathe through a straw to simulate the wonders of living with emphysema. Or was that a science class on the principles of aerodynamics? IN CONCLUSION: 2-3 straws are probably your best bet; this is also guaranteed to lead to brainfreeze. Chug accordingly.

*Don't need to name names, but a friend of mine poured an entire Fishbowl on his own head on his 21st birthday. Looking back, total power move. Let Wando's know who's gonna run that shit going forward.

4) Beer and Shot at the KK
5) Rumplemintz During Flip Night at State Street Brats
6) One and Done from the Blue Velvet
7) Literally Anything from Monday's
8) Das Boot at Essen Haus
9) I Think It's A Long Island, But Whatever Comes In The Mason Jar at Red Shed
10) Orange Halloween Wop
11) Three Story Beer Bongs On Dayton Street
12) Mountain Creek Power Hour

Chicken vs. Pork vs. Beef

If you could eat only one for the rest of your life, which would it be? A quick refresher, in case you're a vegetarian or something weird like that:

CHICKEN
PORK
BEEF
I don't like this game anymore. I have to give up TWO of those for good? This might be a bit of a surprise, but I'm gonna eliminate pork first. As powerful as bacon is, I don't think it can handle the pressure of being pork's top dog. And in the battle of chicken and beef... I'm keeping CHICKEN. It's got my favorite food (tenders), healthy options (grill a chicken? HEALTHY. Grill a burger? NOT SO MUCH), and enough variety to keep things fresh in the protein world. Saying goodbye to steaks and burgers and CGC's would be a devastating pill to swallow, but something's gotta go, and fuck you you're not taking my chicken tenders away from me.

NOTE: Hot dogs were deemed INELIGIBLE because I think they're actually equal parts chicken, beef and pork. Also, I don't know what real pepperoni is made out of, so had to omit that as well. I'm now realizing that a world without beef or pork would make for some seriously difficult decisions in the pizza department. Dimo's would THRIVE.

Congratulations, Lustra. Anytime the name 'Scotty' is mentioned, I'll sing this song in my head. That's right, I associate the name 'Scotty' more with Eurotrip than I do with Scottie Pippen. I'm gonna attribute that to the spelling difference so I can still maintain my pride as a Bulls fan.

Fuck it, let's stick with the pop punk garbage.

Are these guys Canadian? I think they're Canadian. I always feel obligated to point out Canadian things because I find Canadia very fascinating. They should officially change their name to Canadia.

Yeah, add another log to the depression music fire I live with. Damn.

American Hi-Fi - Flavor of the Week

There was a time when I enjoyed these songs. That time is still going on, for the record. #noshame

If we lose this game

Seriously, if we lose...

(Not the most positive of haiku)

Eliminate from your mind the possibility that this is all fake, because I love this video and everything it stands for. If you've never gone out of your way to help a stranger, there's something wrong with you. By 'something', I mean 'a lot'.

If you've always wanted to see a guy with Tourettes do a karaoke version of 'Lady in Red', then consider today your lucky day. NSFW, language, if you can't figure that out on your own.

That's American Gladiator Malibu with fucking awesome hair talking about his injury. Such a bro. Seriously, look at that hair.

SIX TO MIDNIGHT OVER HERE. 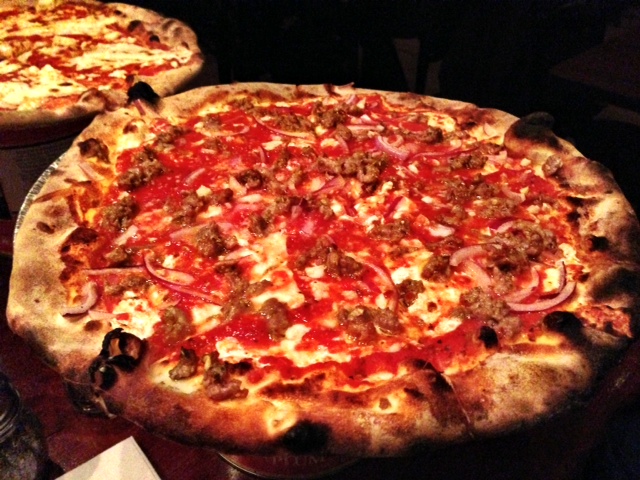 Sausage and red onion (foreground) and four cheese (background) pizza from Coalfire Pizza. Very, very good, and it's always refreshing to try a new non-deep dish joint in Chicago. The oven is firing at 1,000+ degrees, so the pizzas take about 5 minutes to cook. Kinda weird location, but not that far from the Loop and worth trying. 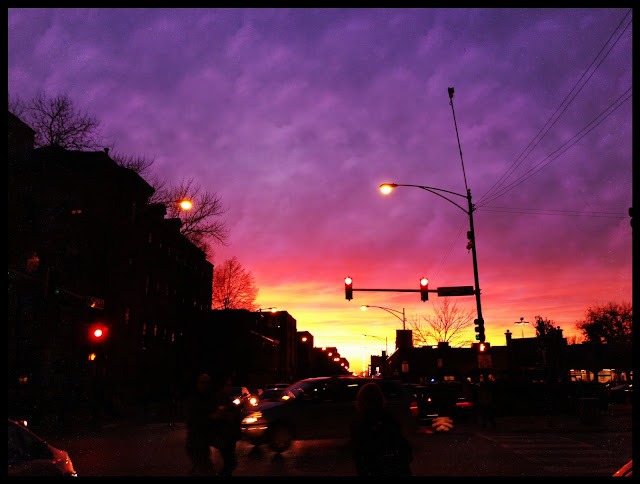 Obviously Sandy was a terrible catastrophe, but if you wanna pull a silver lining out of it, then here you go. This night had legitimately one of the greatest sunsets I've ever seen... but I was stuck on the train for the majority of it. These early sunsets are REALLY cramping my #skyporn style.

I was so good at predictions last year. I am so terrible at predictions this year. And I have a new rule: I'm only predicting Wisconsin to score in multiples of 7, since I assume we're going to miss every field goal we attempt. SAD STATE OF AFFAIRS. THE PICK:

ON WISCONSIN
Posted by Schwa at 8:04 PM