This really feels like a championship season, doesn't it? LET'S RECAP:

5 losses by a combined 19 points. And hang on, let's talk about that Penn State game for a hot minute. If you were paying close attention, you may have noticed the number '42' on PSU helmets and this guy on the sideline: 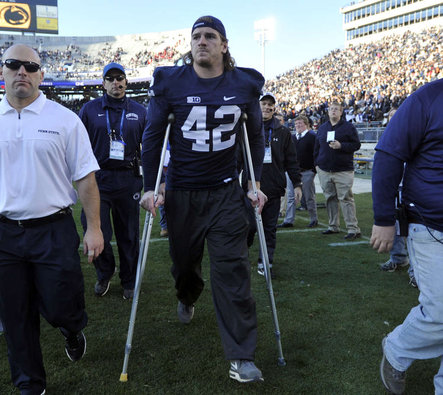 That's Penn State linebacker Michael Mauti. He recently injured his knee badly enough that he could not play against Wisconsin - Senior Day. I'll preface this by saying that it is quite sad for a kid to get hurt before his last collegiate game. I truly think it is. BUT GIVE ME A FUCKING BREAK ESPN.

You're supposed to give an independent broadcast lacking any bias or favor, yet your entire production was centered around Mauti and how brave and strong everything Penn State is. He hurt his knee. It sucks. But last I checked, HE DIDN'T DIE. This isn't a fucking Disney movie. Gerry Bertier getting smoked by a drunk driver in Remember the Titans is a MILLION times sadder and that's a goddamn MOVIE.

Do you know why teams put initials and numbers on their jerseys/gloves/bats/helmets? To honor people that have passed away. Former owners. Legendary players. Humanitarians. NOT for guys with busted knees. I wonder what's going through Curt Phillips' head seeing people fawning over Mauti and his busted knee when Phillips himself has had THREE freaking ACL surgeries.

I doubt I'd be this worked up over it if ESPN didn't cut to him jumping up and down on the sidelines (I'll spare you the 'he doesn't look very hurt...' observation... OR WILL I?) in his jeans after EVERY FUCKING PLAY. Combine that with the shots of brave Penn State fans standing up to adversity (VOM.COM/KILLME.jpg) and our sad, predictable demise, and you get one of the worst 3 hour broadcasts in ESPN history.

PS - Not going for two for the second consecutive week to prevent an overtime where you just KNEW we were gonna lose is beyond frustrating. Our ticket to Indy has been punched for weeks, GO FOR THE KILL BIELEMA.

PPS - The sooner this abomination of a football season is over, the better off we'll all be.

CHICAGO BADGERS: WILLSonWILLSonWILLS if you're not going to Indy. I'm not doing Indy. I don't wanna talk about it.

SHAMELESS PLUG: Last chance to donate to my Movember cause. Think of the countless hours I put into these just for YOUR enjoyment. To those of you who have donated, I thank you. I like you more than everyone else.

PS - Can't wait for 12/1, mustaches are terrible, and mine is such a pathetic attempt at one that I've brought shame and dishonor to my family's name. 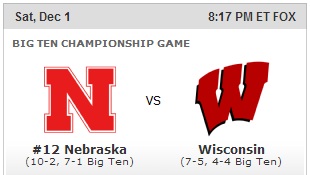 TV: FOX
WEATHER: INDY IS A TROPICAL PARADISE AND THIS GAME IS INDOORS, YOU PROBABLY DON'T EVEN NEED CLOTHES

THERE IS MUCH MORE TO NEBRASKA THAN MEETS THE EYE

How long would it take to get used to having just one eye? I covered my left eye just now and I'm pretty sure I'd walk into a bus or fall down a flight of stairs in about 30 seconds if I lost an eye. Things I never want getting fucked up:
I've never heard anything positive about spleens. If you're talking about your spleen, there's a good chance that you're in a whole world of hurt and I don't wanna play that game anytime soon. Or ever. And orbital bones. Fracturing my orbital bone makes me want to wear a helmet everywhere I go. There's no way that's a fun injury.

I am not making this up:

Hunter Spanjer says his name with a certain special hand gesture, but at just three and a half years old, he may have to change it.

"He's deaf, and his name sign, they say, is a violation of their weapons policy," explained Hunter's father, Brian Spanjer.

Grand Island's "Weapons in Schools" Board Policy 8470 forbids "any instrument...that looks like a weapon," But a three year-old's hands?

"Anybody that I have talked to thinks this is absolutely ridiculous. This is not threatening in any way," said Hunter's grandmother Janet Logue.


OK, first question on everyone's mind: Do you get to make up your own name sign? I used to think that deaf people would just sign the letters to spell out things like names and places... but this is much, much cooler. And more efficient! I've looked extremely white every time I've tried to pull off a complicated handshake, so there's a good chance that my name sign would be miserable. But based on the fact that Hunter's name sign involves weaponry, we can safely assume this kid is a fucking badass. If my name were Hunter I'd do the Shooter McGavin pistol move for sure.

PS - If I had it my way and I were deaf, I'd change my name to Marbles and just do this all day erryday: 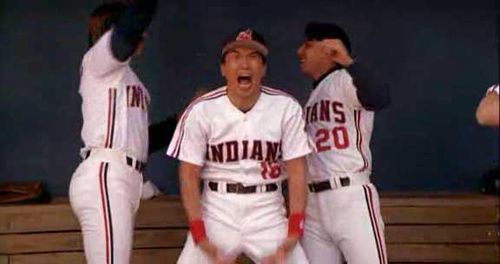 What, you got a problem with my name?


DID YOU KNOW... PEOPLE THINK YOU CAN GO MOUNTAIN BIKING IN NEBRASKA?

That is what we in the industry call a #burnnotice. By industry, I actually have absolutely no idea what I meant. USE YOUR IMAGINATION

DID YOU KNOW... IT IS ILLEGAL TO HAVE SEX WITH A TRUCKER INSIDE OF A TOLL BOOTH IN NEBRASKA?

I won't even bother citing my sources on this one since it somehow makes perfect sense and really nails the whole Nebraska motif.

DID YOU KNOW... IT IS ILLEGAL TO ASSAULT YOUR WIFE WITH A SANDWICH IN NEBRASKA? 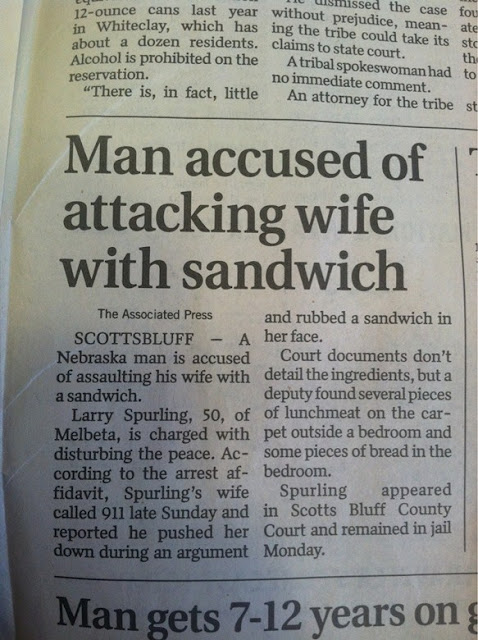 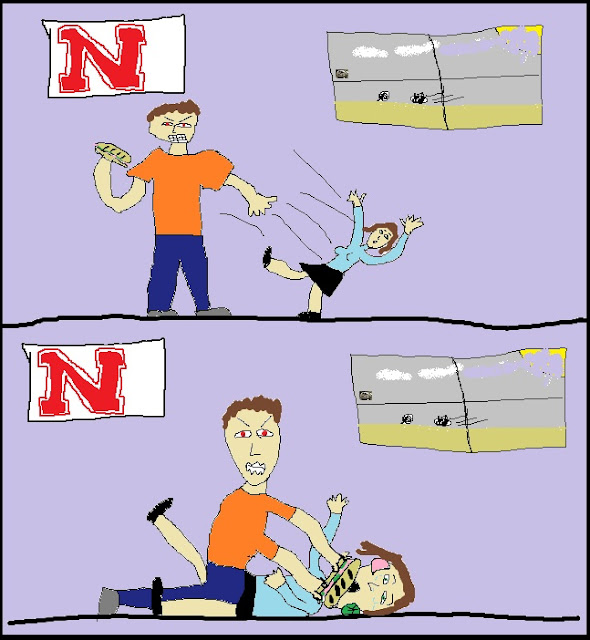 The answers to your inevitable questions:

TRUE, this would have been a billion times more relevant over the summer, but that doesn't matter.

SUMMER OLYMPICS
*I googled 'Important Native Americans' to get to that Battle of Little Bighorn. In case you were wondering.

One of my biggest weaknesses is that I'm TERRIBLE at understanding what bands are singing. I pretty much never understand the lyrics as they're being sung. That's why I love these videos that have the lyrics added in. I'll read along and be like 'Yup, yup, makes perfect sense, let me try a line without looking at the lyrics. Nope, no fucking clue what he's saying. Something about a trying mind? FUCK.' Every time. Every song. It sucks.

Does Ricky Martin get royalties for the 'she was livin' la vida locaaaa' line? He totally should. And for some reason, I'd really like to watch these guys hang out together: 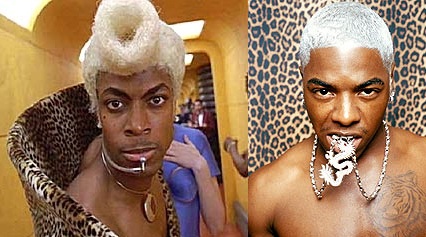 The video is worth watching simply because it splices scenes of jets attacking with a dude playing piano in a hanger and one guy shredding on top of an F-14. #badass

One win from Rose Bowl

We don't deserve it? So what

WIN IT FOR STAVE

When I tell people that cats suck and you're gonna turn into a crazy old catlady, this is exactly what I'm talking about. But fine, I'll admit that if you play heavy metal music and make them do a mosh pit, it's pretty funny.

I just pooped my pants watching this. Whales don't fuck around.

I'll bet you a billion dollars I don't have right here, right now, that Greg is an only child. 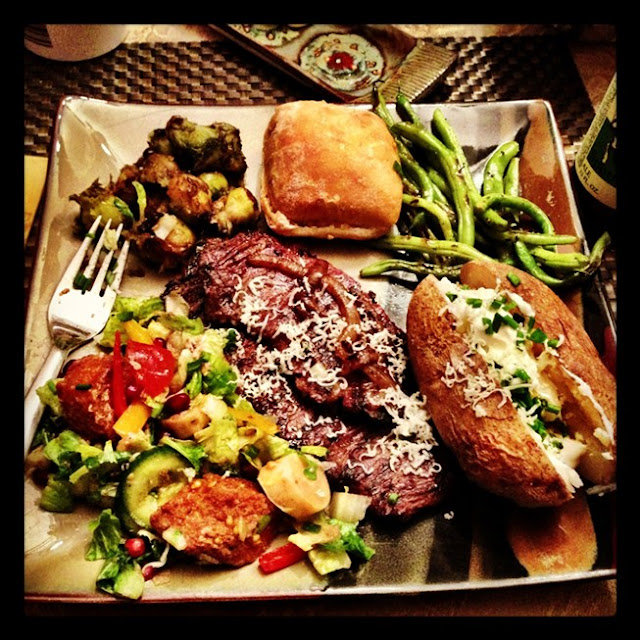 I HAD A DELICIOUS THANKSGIVING DINNER FOR THE FIRST TIME EVER. Brussels sprouts (first timer!), green beans, baked potato, salad, and of course, skirt steak. With a little cheese grated on top of everything, because, Wisconsin. Everything was amazing, but I won't lie - I still missed White Castle. It was INGRAINED in my family's Thanksgiving routine, and we had to cut it off cold turkey. This must be EXACTLY what quitting smoking is like. 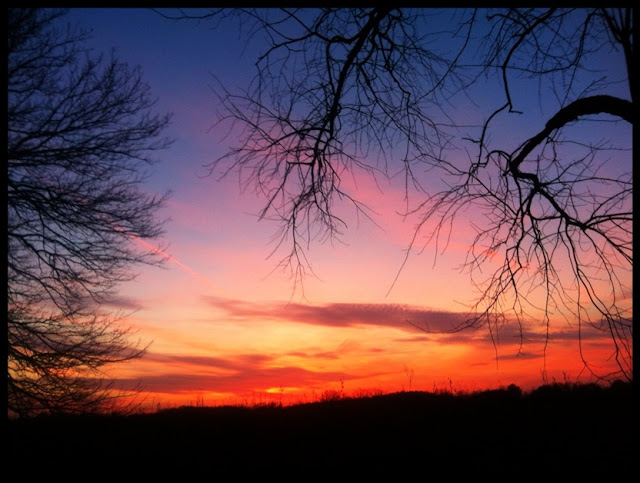 Awesome sunset tonight in Madison, courtesy of my sister. It kinda sucks that I wasn't really in the #skyporn game when I was a student. It's not fun unless you have a camera that can at least kinda sorta handle it. So now I have to pray that my 1-2 trips up to Madison each year yield SPECTACULAR sunsets. Or just let my sister take care of it for me while I sit in Chicago. Both work.

LOOK AT THIS FUCKING BABY WITH A SMARTPHONE 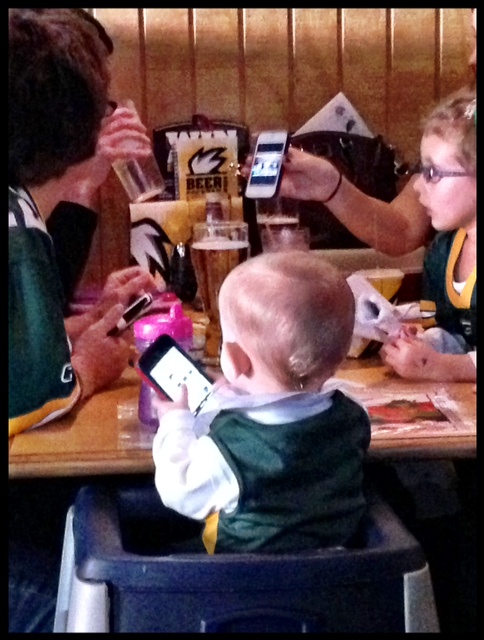 I was at BW3 for football a few weeks back and I looked over and saw a table full of children playing with smartphones. Including this fucking baby that don't give a shit what you think. It's hard to tell from the pic, but this fool has the phone upside down. Obviously this was my reaction: 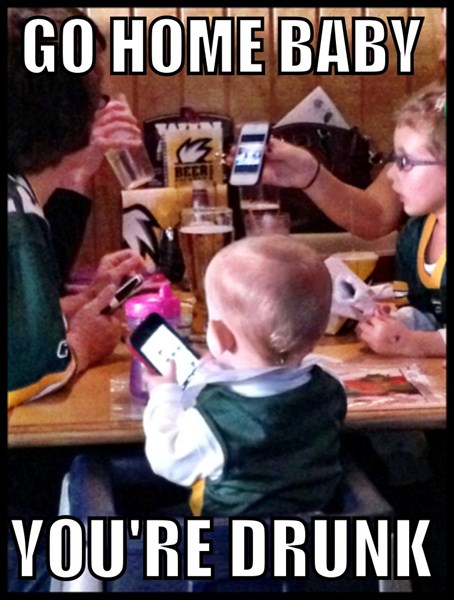 HOW TO SPOT A TOURIST ON THE TRAIN 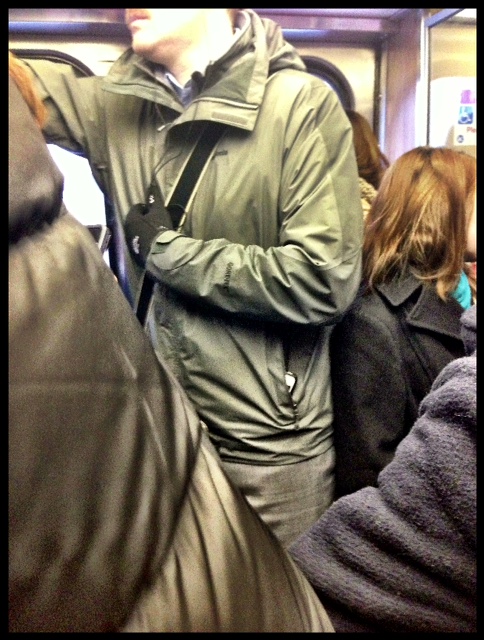 Yup, that's a brand new iPhone just poking out of his pocket. At first, I thought about saying something to him. Then I thought 'what if I just swindle it from him and then give it back, to really hammer the point home?' And THEN I thought 'that's a terrible idea, what if he grabs your arm and breaks it for trying to steal his iPhone?' Then I almost missed my stop and got Dunkin' Donuts. Someone's probably selling his iPhone on Craigslist right now. I kinda feel like Carrie in Homeland. I COULDA STOPPED IT, I CAN'T LET IT HAPPEN AGAIN, SAUL HAVE I TOLD YOU LATELY YOUR BEARD IS MAGNIFICENT?

PS - If you're not watching Homeland then I question why you even own a TV. However much Showtime costs a month is worth it for the 12 episodes of Homeland you'll get. Claire Danes isn't hot, right? I mean, just about any dude would bone her. But she's not really hot, is she? This is kinda like that episode of The Office where they can't decide if Hilary Swank is hot or not (I say NO). MAKE IT RELEVANT: Hilary Swank was born in... Lincoln, Nebraska! She's also missing an 'L' in her name, was a Junior Olympic swimmer, and believes in a higher power, but is not a member of any organized religion. And she's not hot.

You can immediately rule out the reverse-jinx. I'm not playing that game this year. Even as I'm typing these words, I have no idea what to make of this game. Nebraska should win. They really should. They've been better in all aspects of the game this year. They're not on their third starting quarterback. Pelini did not lose 6 coaches, the best quarterback in the history of the world, and various other important pieces. But I'm still, SOMEHOW, not ready to count this Badger team out yet. Phillips has done just enough to make me think he might have a run left in him. The team will be as healthy Saturday as they've been all season. That means Borland is back patrolling the field, which is as good a thing as there is. So, fuck it. Let's beat these corn-eating assholes and go to a third consecutive Rose Bowl. Let the rest of the nation cry that 8-5 Wisconsin has no business playing in Pasadena on January 1st. Good luck getting Bielema to agree. And I have a feeling his boys won't give a shit either. LET'S DO THIS. THE PICK:

WISCONSIN 27, NEBRASKA 21. FINAL. OVERTIME. LOCK IT THE FUCK UP.

ON WISCONSIN
Posted by Schwa at 8:48 PM