This is where I tell you that this is gonna be an abridged version due to Thanksgiving and all the other chaos associated with this week, but I'll probably still get carried away. Oh well. 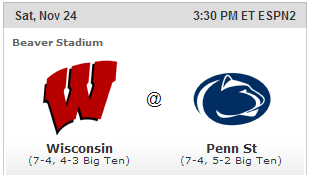 He is known for his long hair, love for metal, and strong dislike of mustard.

And on top of all that, he's a chemist specializing in synthetic materials. I almost feel like I'm getting punked because that's too good to be true.

PS - Which of these is unlike the others?

Love that he's sandwiched betwixt an astronaut and a quantum physicist. I wonder which condiments they hate more than AIDS?

1) Spotted Cow Pitchers at The Terrace 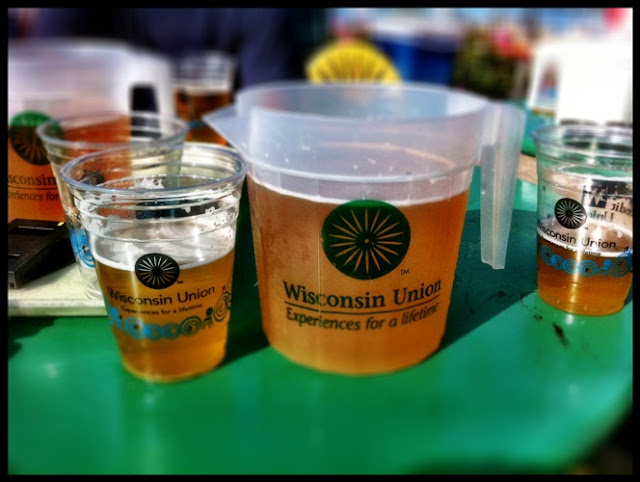 You know what I was depressed to discover over the summer when I visited Madison? They no longer do that 'bring a pitcher back for a dollar' thing. I used to LOVE battling the bums for spare pitchers. You don't really know what kinda person you are until you rip an empty plastic pitcher out of a ghoul's hands.

And yet, despite this egregious change, there's absolutely no way you can top a nice cold pitcher of Spotted Cow on a beautiful day at the Terrace. It is impossible. It's why people go there to get married. It's why no one has ever turned down an invitation to go grab a pitcher instead of going to class. All the superfluous words in the world don't do it justice.

Not only is it delicious, but I think a pitcher of Spotted Cow costs like $8. That's FREE in real life terms. SOMEWHAT RELATED THANKSGIVING TANGENT: It's widely known that my family has gone to the same terrible Thanksgiving meal every year since I can remember. The food is all bland and tasteless, there's ZERO alcohol, and people eventually huddle around a broke-ass old TV for football. It sucked. And inevitably, every year we'd end up going to White Castle on the way home to get our glutton on.

NO MORE. This year we're doing things Rifkin style from home. Skirt steaks, HDTV, and all the Spotted Cow I can drink. I can't even tell you how excited I am. I know NOTHING of getting hammered and full on tasty food. Isn't that ridiculous? I love America way too much to have to deal with that bullshit.

Are you supposed to eat lunch on Thanksgiving? Normally I'd think not, since you don't fill up a tank til you hit 'E'. But what if you're doing Black Wednesday and you wake up with that obnoxious, empty, hungover stomach? Do you fight through and hope dinner is served at 2:30 pm? PROPOSED SOLUTION: Start drinking when you wake up on Thursday. Tides the stomach over until it's grub time, fights off the hangover, and gets you a head start on being the drunkest person at the table later that night. I have no idea if this is common sense. Like I said, I'm still new to the NORMAL Thanksgiving game. I've spent enough years eating soy, organic 'dessert' and dry, kosher turkey that I'm only enrolling in Thanksgiving 101 this year. Gotta walk before you can crawl.

Is there such a thing as Thanksgiving Music? OH YES THERE IS

I still think the Hanukkah Song AND Lunch Lady Land are better, but it is neither Hanukkah nor Lunch Lady Time.

You should be thankful

That you went to Wisconsin

Could be a lot worse

Eat as much food as you want

(If this blogging for $0 a year gig doesn't pan out for me, I think I have a future in useless Haiku writing.)

This guy thinks his gobbling at turkeys is the funniest thing in the world. I know, it's probably lame to laugh like that at yourself. But you know what? I LOVE geeking out over stupid shit like this. I totally feel where he's coming from. If I were makin' all the turkeys go gobble gobble gobble I'd be crying sweet, sweet tears of joy. Laugh on, my man.

Absolutely nothing to do with Thanksgiving, but it makes me laugh and hopefully it will make you laugh as well. 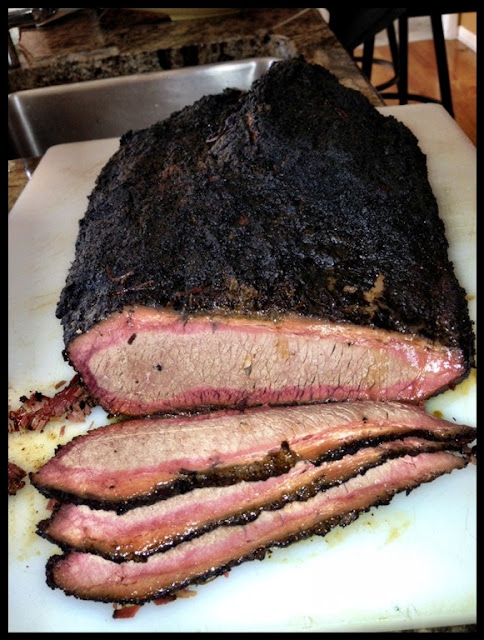 Homemade brisket courtesy of my dad and little brother. LOOK AT THAT SMOKE RING. That's how you know it's real, and it's spectacular. 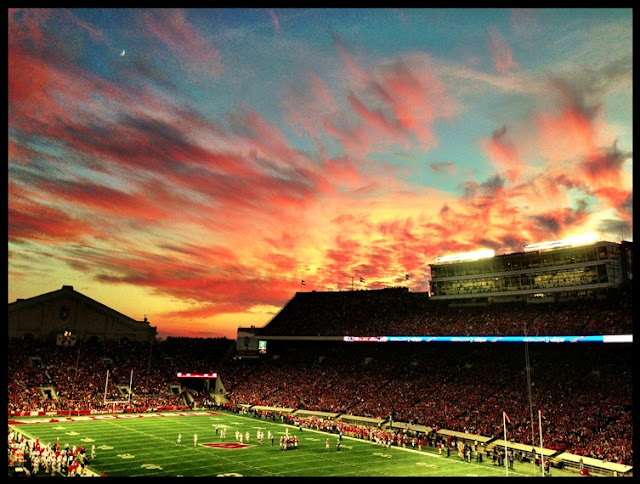 I've put this on every branch of social media that I have at my disposal, but I'm using it here again because I still really like it. The forecast for Saturday was calling for HEAVY #skyporn, and Madison did not disappoint. Look at the little moon up there just chillin'!

Montee Ball will set the record. Curt Phillips will look a little bit better. The defense will play as well as they have. And hopefully we will not shit the bed in special teams. Bounce-back, roll-to-Indy-with-some-momentum game, COMIN' ATCHA. THE PICK:

ON WISCONSIN
Posted by Schwa at 3:39 PM