I don’t know what to tell you.

Let’s just do a retro diary:

6:00 PM: Working until midnight. Reward? An extra day of PTO. Also, I’m a firm believer in staying in Fridays before gamedays. Even for a 9:30 pm kickoff, I still like to go in FRESH. Most responsible thing I do in life.

7:44 AM: Switch sides, back to sleep. How do you sleep? I’m an habitual side-sleeper. My routine is usually to start on the left side and ease into it like an old man into a nice warm bath. But then shortly after I FLIP THAT SHIT and I’m on my right side going straight to sleeptown. Then I wake up and my shoulder cracks in 4 different ways and I’m pretty sure I’m gonna pay for this later in life. But I can’t change! How the fuck do you sleep on your stomach? I feel like you either suffocate your face in your pillow, or sleep with your neck at a 90 degree angle. And no fucking way anyone sleeps on their back. That’s for dead people in caskets.

I’m coming to terms with the possibility that I suck at sleeping, which is frightening considering how good at it I was in high school.

1:45 PM: Finally up, check Twitter, see that Michigan is in a battle with… Akron? GLORY GLORY LET’S GO AKRON.

1:52 PM: Akron has 2nd and goal at the Michigan 2… and promptly throws an interception. DON’T TEASE ME, AKRON.

1:58 PM: After a few struggles running the ball, Akron punches in a TD. 24-21 good guys. 4 minutes to go. CAN YOU TASTE THE MUSTACHIOED TEARS? 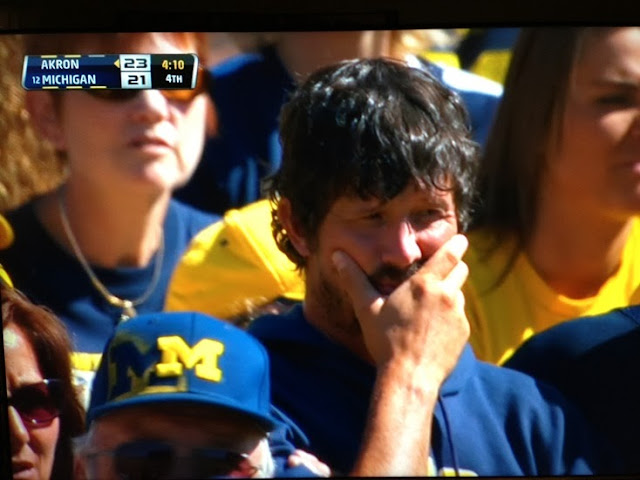 2:03 PM: Akron has the ball, down 4, a shade under 3 minutes to go. 3 MINUTE DRILL. Despite picking up two bad penalties, Akron has a 3rd and 1 on the 2 yard line. Two shots for the end zone to cause severe flooding in the general Ann Arbor area due to a torrential downpour of Michigan Tears.

2:04 PM: GODDAMNIT YOU ZIPS. Time to put some clothes on.

2:05 PM: OMG IT’S OVER 7 HOURS UNTIL KICKOFF? What am I supposed to do? I take back everything I ever said about loving night games. By the way, Potbelly has Nueske’s bacon now and it is FANTASTIC.

2:30 PM: Bama/TAMU kicks off. Manziel comes out balling, and I’m really digging his sleeve. But gun to my head in a sleeve-off, I’m taking Stave:

4:00 PM: I thought for sure Vegas would have a prop bet about the first time we’d see AJ McCarron’s girlfriend AND mom. Nothing yet. REMEDY THIS, PERVY CAMERAMEN.

5:30 PM: Bama holds on. Up next? WISCONSIN AND ARIZONA STATE OH WAIT NOT FOR ANOTHER 4 HOURS MIGHT AS WELL BE 14 YEARS

7:30 PM: Arrive at Will’s. Early observation: RETURN OF THE MEAT AND CHEESE TRAY. A FINE development.

9:25 PM: Eastern Carolina A&M Tech is down 12 with 45 seconds left and using all their timeouts, extending the game into the UW/ASU broadcast. This happens to UW ALL THE TIME. Just wait for hoops season – the game before the Wisconsin game will 100% end with 25 minutes of fouls and free throws despite it being a 32 point game.

9:55 PM: Bending so hard, breaking not at all. Down 3-0 after the first quarter and I consider this a minor miracle.

10:12 PM: BOOM, Badgers on the board with a nice play-call ending in a Stave touchdown pass. All we need now is a quick stop and we’ll have some momentOH MY GOD THE BALL IS LOSE FAT GUY TOUCHDOWN WISCONSIN.

10:13 PM: In these situations, I feel kinda, sorta bad for the punter because theyalways look so helpless when they don’t get a perfect snap… but at the same time touchdown UW we’ll take it and we roll.

11:00 PM: The first half winds down with a long ASU drive that eventually stalls out after a great goal line stand. ASU was helped by a defensive holding and two pass interference calls. Our secondary did NOT have a good game.

11:10 PM: Still waiting to hear my raffle number called, starting to think there’s a conspiracy from letting me win again. Also, cheese curds. Lots of them. There must have been a gallon of ranch on our table at one point. This is a good thing.

11:15 PM: All things considered, up 1 at the half on the road is a good place to be. Also, Melvin Gordon is currently taking a jet sweep for an 80 yard touchdown on the first play of the second half and #MGIII is all that needs to be said. He is good at football.

12:00 AM: After some boring punts, the Sun Devils punch in a touchdown to cut it to a 2 point game. Following a missed 2 point conversion, the third quarter concludes with a 35 yard #MGIII scamper and an 18 yard pass to Abby. These are our playmakers. Every ball should go to them.

12:05 AM: French is good from dead center, 34 yards out. I will not be typing this sentence again and that makes me want to hurt something.

12:45 AM: Sweet, we’re about to go three-and-out OH MY GOD NO WE’RE NOT. Perfectly executed fake punt featuring a Chris Borland (who else) throw to Pederson for a first down.

1:00 AM: #MGIII cashes in, but then inexplicably is taken out of the game for the crucial 2 point conversion. We try to throw it. It does not work. Why must we always throw on 2 point conversions? I gag thinking about the TCU Rose Bowl. RUN THE BALL.

1:15 AM: I love this: Up 2, 4 minutes to go, and ASU goes out of bounds, takes a timeout, picks up a penalty, and throws an incomplete pass. For the record, the coach behind this genius time management just got a contract extension.

1:26 AM: Clock is stopped with 18 seconds remaining. Ball is on the right hash at the 13 yard line. Stave takes the snap, centers it, takes an awkward knee, places the ball down.

And then the biggest clusterfuck I have ever seen on a football field happens.

You can say and think what you want, but here are the facts:


I don’t know what else to say. It’s been broken down and analyzed by just about everyone in the world. Wisconsin may not have handled the situation perfectly (there was an odd lack of urgency after the kneel-down, which I might attribute to confusion by the lack of urgency from the refs), but this is one of the rare times where I’ll say we most likely lost this game because of poor officiating. No guarantees that French hits that field goal, but I agree 100% with centering the ball before the attempt. A fucking shame we’ll never find out what would have happened if French got to kick.

Let’s move the fuck on.

CHICAGO BADGERS: 2:30 kickoff, perfect for day-drinking at Will’s. If you can’t figure this out by now, seek professional help. 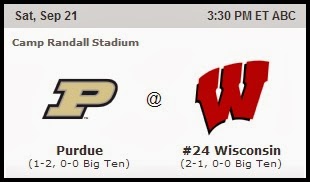 9) Hook up in the Memorial Library cages 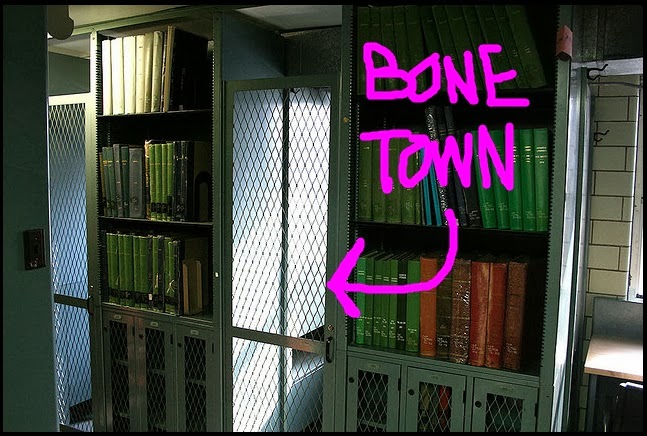 Full disclosure: I am a cage-fuck virgin. I was never lucky/smooth/WHATEVER enough to set up Nut City in one of those terrifying, claustrophobic little boxes. But I know people who have, and it’s one of those things that people talk about just often enough to make you believe that it’s actually a ‘thing’. And now that I sit here all old and graduated and fuck now I’m depressed and I lost my train of thought. Either way, if you were one of the lucky ones drinking bone juice in the stacks at Memorial, consider me impressed. Also know that I hate you out of pure jealousy, and if you’ve got a good story (DID YOU GET BUSTED?), feel free to pass it along. Anonymity guaranteed.

PS – Heroin is the scariest thing in the world and yet if there’s one place in the world that it should be legal it should be in the cages at Memorial. I have no idea if that makes sense, I just think it does. I’m so scared of real drugs.

Lord knows this was painful to watch last Saturday. It seems like the entire second half was nothing but our corners getting beat on back-shoulder passes when they weren’t busy picking up pass interference flags. I highlighted that matchup before the game, and it ended up killing us way too many times. Here’s an educated guess: Purdue coaches will have studied the shit out of that game film and will realize that they too can probably pick on Shelton, Hillary, and Jean in similar fashion to what ASU did to us. The million dollar question is can we adjust? Can the corners get their heads turned around in time to make a play on the ball? Can they keep their hands off the receivers and rely on their footwork and positioning to make plays without picking up penalties? This is the number one area I’m looking to see improvement in other than end-game kneel-down situations with terrible refs at the helm.

Notorious B.I.G. and Miley Cyrus – Party And Bullshit In The USA

THAT WAS SOME BULLSHIT IS WHAT I’M TRYING TO SAY.

PS – There’s a song called ‘Kill The Referees’on Spotify but I couldn’t find it on YouTube. Also pertinent.

THIS WEEK’S GAME IN HAIKU

What is done is done

Indy is still up for grabs

It starts with Purdue


I feel like people frequently say ‘eagle’ when asked what animal they would like to be. This does nothing but confirm that those people know what they’re talking about.


I love Wheel of Fortune… and this is absolutely brutal. Can I also point out that the guy who ‘won’ that round said ‘cabinets’ instead of ‘cabinet’? QUIT PLAYING FAVORITES, PAT.

Watching this woman dance on the street made me so inexplicably happy that I want to share it with you so you can be happy as well. Do yo’ thang, girl.

PS – Gonna have to start paying attention to my limbs as I listen to music on my commute. I know I do some of those moves and I’m very scared right now that people are out there laughing at meair drumming to Love Is Only A Feeling.

It’s a damn shame that this video game does not actually exist. It’s also bizarre seeing Luigi get his nut. Not sure how I feel about that. 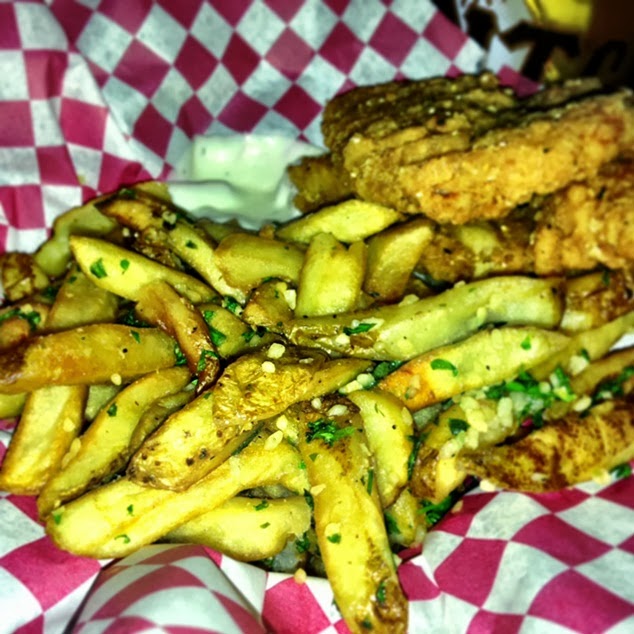 GARLIC FRIES from AT&T Park. This has been the one stadium concession item that I’ve craved my entire life despite having no idea if it actually lives up to the hype. And, well, these fries are fucking dank. Obviously if you love garlic they’ll be right up your alley, but I think anyone can appreciate them. I inhaled them. After a long day touristing around in San Francisco, I literally bought a $10 ticket in the 7th inning by myself just to a) see the stadium, and b) try these fries. That they came with an available tender upgrade? TAKE ALL MY MONEY. 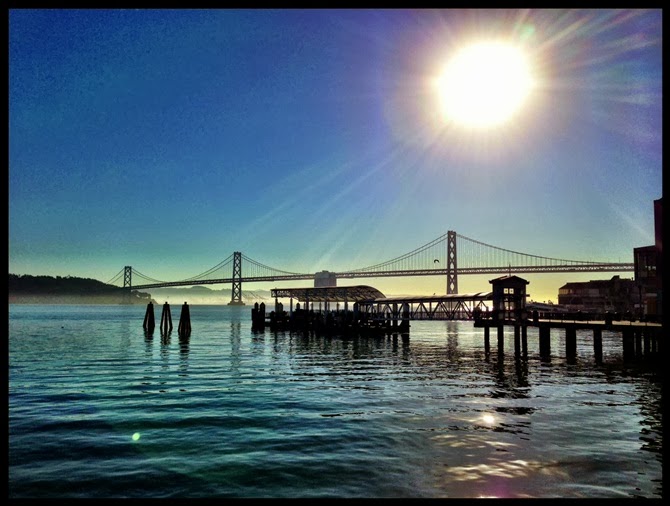 No, this is not the Golden Gate Bridge. Am I in the minority thinking the Bay Bridge might be cooler? It even lights up at night! If I have one gripe about San Francisco, it’s that instead of having clouds up in the sky for badass sunsets, it has fog on the water for creepy fog pics. Not nearly as cool. YOU CAN DO BETTER, PORT CITY.

I FOUND A REAL LIVE PROP FROM MRS. DOUBTFIRE 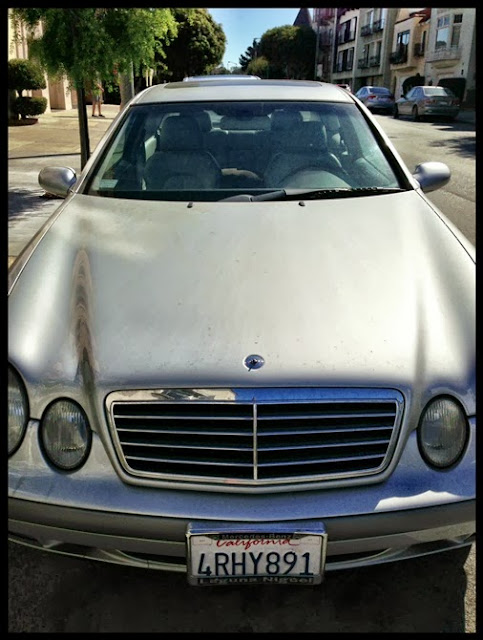 PS – The compensation line went right over my head times a million as a child.

PPPS – I literally stopped in my tracks on the street when I saw this car and giggled like a 12 year old while taking the picture. It’s just like the movies! MRS. DOUBTFIRE WAS REAL

This is coming, don’t doubt it. THE PICK:


ON WISCONSIN
Posted by Schwa at 7:23 PM