THIS FEELS LIKE IT IS ALL MY FAULT. That's how I'm taking it. That's how I'm processing Frank having a SNEAKY concussion, Traevon fracturing his foot, Dekker disappearing, Gasser missing free throws, and Wisconsin losing to RUTGERS. I am 100% dead serious when I say I didn't think we'd lose to Rutgers in hoops OR football for at least the next 14 years. I was stunned and ashamed and CULPABLE. This is what I get for talking about running the table and never believing we're going to lose. This is what I get for only knocking on wood a few times instead of finding a sledgehammer and destroying my nightstand. THIS IS WHAT I GET.

HOWEVER, with all of that dramatic crap said, I'm still TEEMING WITH OPTIMISM. Allow me to explain:
Losing to Rutgers sucked. Losing Trae for an extended period sucks even more. But I'm not gonna doubt this team. And you shouldn't either.


CHICAGO BADGERS: Hey, LAWYERS. Can you tell me the laws about who is responsible for shoveling sidewalks in front of buildings? Home owners? Businesses? The city? Shouldn't it be ILLEGAL to just let snow pile up in front of your house/business/building until it gets super compacted and becomes a DANGER ZONE to walk on? Yes, it should be. If my alderman is on Twitter, I'm gonna BLOW HIM UP. 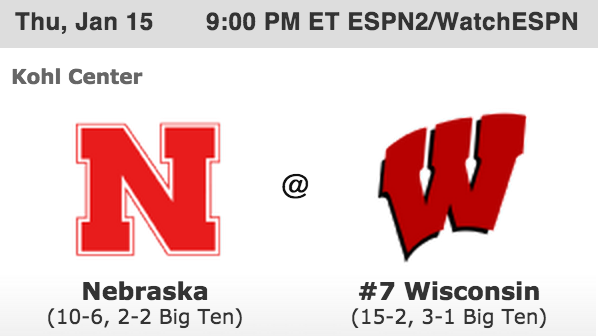 1) Wisconsin, 15-2 (3-1). COLOR ME CRAZY, but we're still the top dawgs. NO team wants to go against our frontcourt, and I'm still fully expecting us to win the conference. Oh god I have to stop fully expecting things.

2) Rutgers, 10-8 (2-3). I wanted them to beat Maryland SO BADLY. But the fact that they battled Maryland all the way to the bitter end means these bums might not be quite as bad as we thought they were. At least for the week, they get my respect and I still hate them and wish they weren't in the B1G.

3) Maryland, 16-2 (4-1). Maryland, on the other hand, is a welcome addition to the league. They've had a strong hoops program for a long time, and if we're gonna add teams to the conference then they better be good at at least one sport. YOU CAN STAY

4) Ohio State, 14-4 (3-2). Have you heard about Ship Your Enemies Glitter? It's literally just that: they'll ship an envelope full of glitter to someone you hate. In theory, this is fantastic. But do people really open envelopes like savages? I'm 90% confident I would get MINIMAL glitter all over the place if I opened one of these suckers. As I'm typing this I'm realizing that I'm basically daring someone to glitterbomb me. I also just thought 'man it would be so hilarious if I glitterbombed one of my roommates', but then I realized they'd probably open it in our kitchen and I'd be eating glitter steaks for WEEKS. Glitter is the worst. 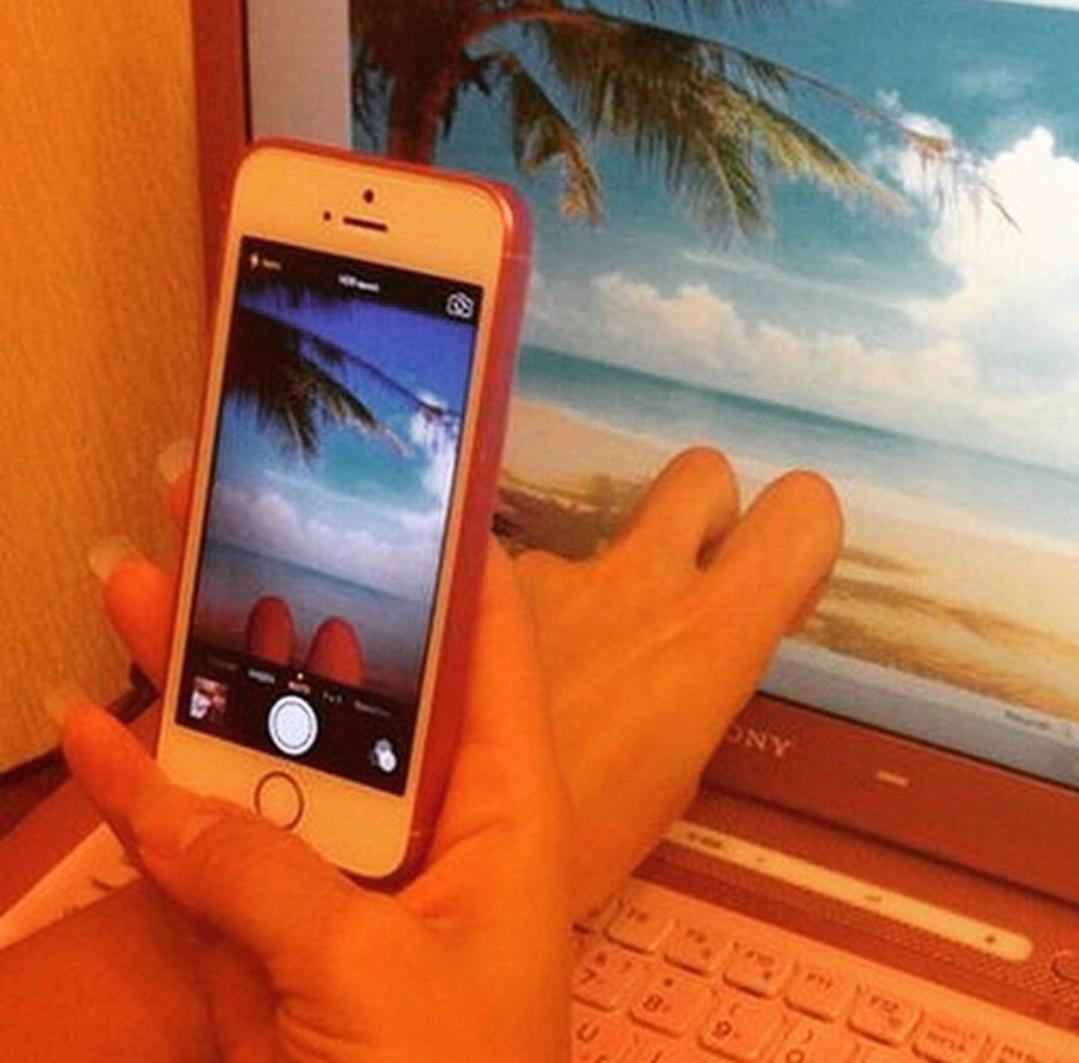 Would have been 100x funnier if she held a couple of hot dogs up in front of the picture, though.

7) Indiana, 13-4 (3-1). Hello my name is Brandon and I'm still refusing to give them any credit. IDK if you've heard, but they're gonna be showing the last 2 episodes of the 4th season of Game of Thrones at IMAX theaters in February. My co-workers were trying to plan an outing for us and the ONLY night that worked was the night that we play IU in hoops. It was difficult to convey how badly I wanted to watch that game live to I could tweet and vine and revel in Crean's misery. They just don't get me.

8) Purdue, 10-7 (2-2). Speaking of my office, we are DEEP in a NERF war right now. Someone got three little guns during our Yankee Swap, but ESCALATION HAS OCCURRED: 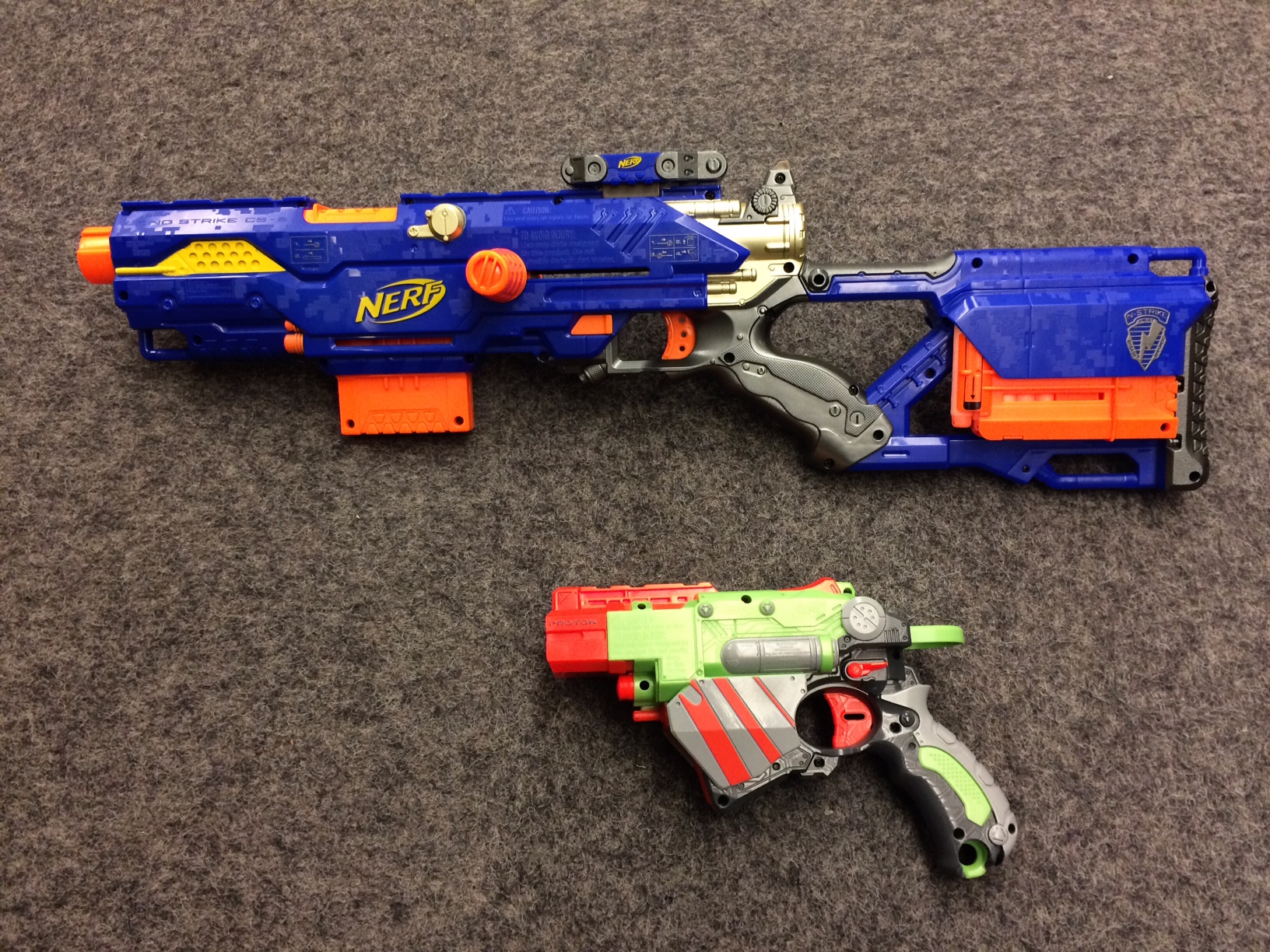 It's just like Gordon said in Batman Begins: We start using semi-automatic, they buy automatic. We start wearing Kevlar, they buy armor-piercing rounds. My co-workers had dinky little single shooters, I bring in the disc blaster. They find some chain-gun looking thing, I bust out my thisiswhyimbroke.com impulse purchase sniper rifle. ESCALATION.

PPS - Yeah I bought $25 worth of ammunition at work today.

9) Nebraska, 10-6 (2-2). #NEBRASKETBALL is coming to town! Oh how I've longed for the #NEBRASKETBALL hashtag. That's as good as hashtagging gets right there. But F them, they don't win on the road and they DEFINITELY don't beat a pissed off Wisconsin team in the Kohl Center. I AIN'T EVEN SCARED OF JINXES (kinda scared). 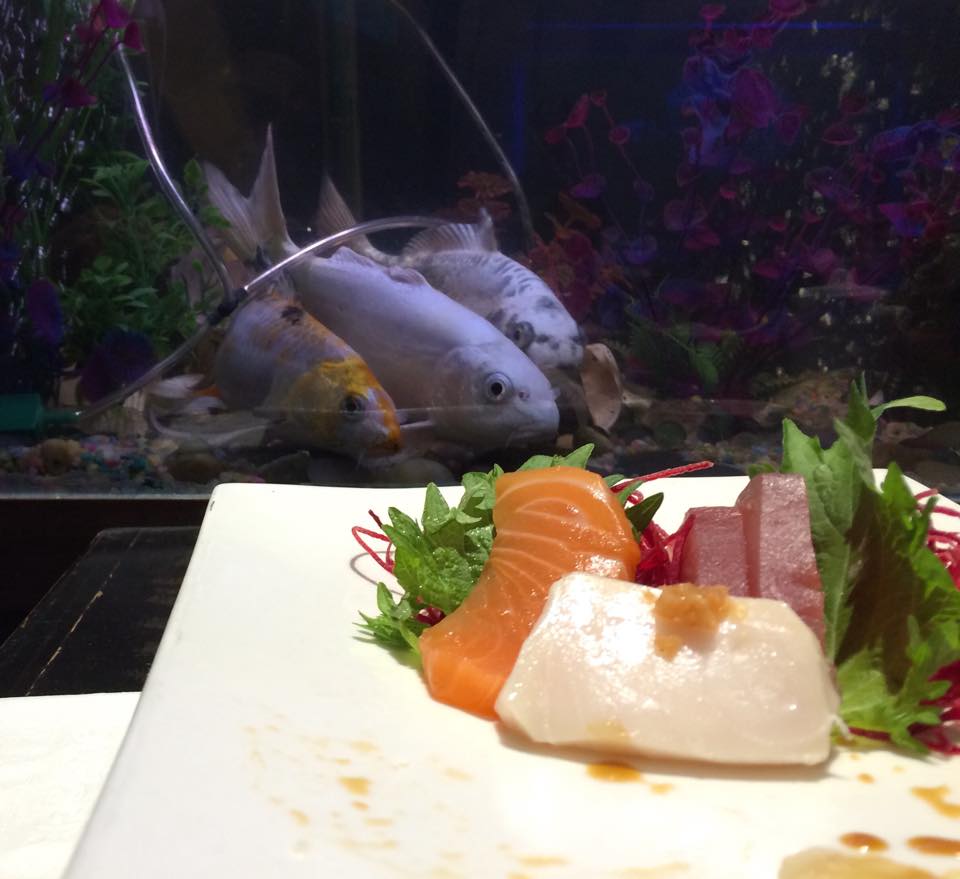 I've never really seen the Finding Nemo movies but this feels like a real life reenactment of a sad scene during one of those movies where Nemo and friends look on as a dirty HUMAN eats Nemo Sr. sushi.

12) Penn State, 12-5 (0-4). Had a flight during the Packers game on Sunday and I MIRACULOUSLY made it home without seeing a single play or hearing the score. Kept the phone in airplane mode the entire time, secluded myself on the train, grabbed food para llevar at a restaurant I knew didn't have TV's, warned the roommates to pause the TV and not look at me, and ran straight to my room to watch the recording. MASTERFUL. I ALMOST ruined everything when the Red Line station had a display that put a big pic of Aaron Rodgers up, and I was so scared I just saw something important, but it was just saying his calf was hurt. KNEW THAT. And then in line at Blazé the guy behind me had a Packers shirt on it and he seemed happy, but I didn't know for sure what he was happy about.


One of the best rock and roll bands of all time (and they're all woman. gasps!) recently got back together and are about to release their first album in a little less than a decade. I'm excited to hear the whole thing and see them kick cunt live again. Pray to Satan and dreams can come true. (JQW)

Born in Malaysia, Yuna taught herself guitar and began writing songs at the age of 14. She currently works and lives in Los Angeles. Her soothing voice gives her songs a unique sound that will relax you in any situation. Also, if you ever find yourself in Malaysia (you never know), check out her shop November Culture, where she sells clothing designed by her and even make your own little terrarium ! (Noör)

Why a Darkness song? Oh, I dunno, maybe because they now have a female drummer and a new album coming out in March. I LOVE FEMALE DRUMMERS. Easily in my top 5 of bands that I WILL see if they're in my city one way or another. Too good, too shreddy, too fun.

I'd say there's a 10% chance that Koenig comes out BALLING, a 10% chance that he falls flat on his face, and an 80% chance that he goes through some serious ups and downs as he is forced into a full-time starting role. BOLD HOT TAKES. But that's just the reality of the situation we're facing. Like I said before, this team should be able to ride the bigs straight to the title, but they're gonna need some good point guard play to facilitate things and make some moves in March - especially if Trae isn't back/100%.

I have a ton of faith in Bronson. The kid's got a beautiful stroke, tight handle, quick feet, and is one of the smoothest passers I've seen. However, whether it's the lack of playing time or the upperclassmen above him, he hasn't fully unleashed himself. That's going to change. Get ready for the Koenig Show. I think it's gonna be a good one.

All hope is not lost

It helps when the next man up

Is a freaking stud


Oh the joy this video brings me. Irish guy realizes there's fookin' SNOW outside and all he wants is for his roommate to see it. But his roommate will have NONE of it. Every inch of this is adorable. Strong hints of Double Rainbow Guy, and the relationship between them reminded me of these British guys visiting America:

Foreign slang is the BEST. Mates, this video is the BALLS. And apparently being the balls is a good thing. WHO KNEW.

PS - I don't think I can tell a British accent and an Australian accent apart. Is that because the British used to send all their criminals and crazies to Australia? As far as banishments go, Australia has to be one of the best ones out there. It's not like the British were sending their murderers to Ohio or anything inhumane like that.

PPS - Almost 5 years exactly since Double Rainbow Guy took the internet by storm. I just watched it for the first time in years. It's absolutely brilliant still. I forgot how amazing the entire thing was.

Dumb dogs are so awesome. Really smart dogs are pretty awesome too, but dumb dogs are hilarious and cute times a million. Stiff competition for DUMB DAWG O' THE WEEK between squeaker here and Sophie: 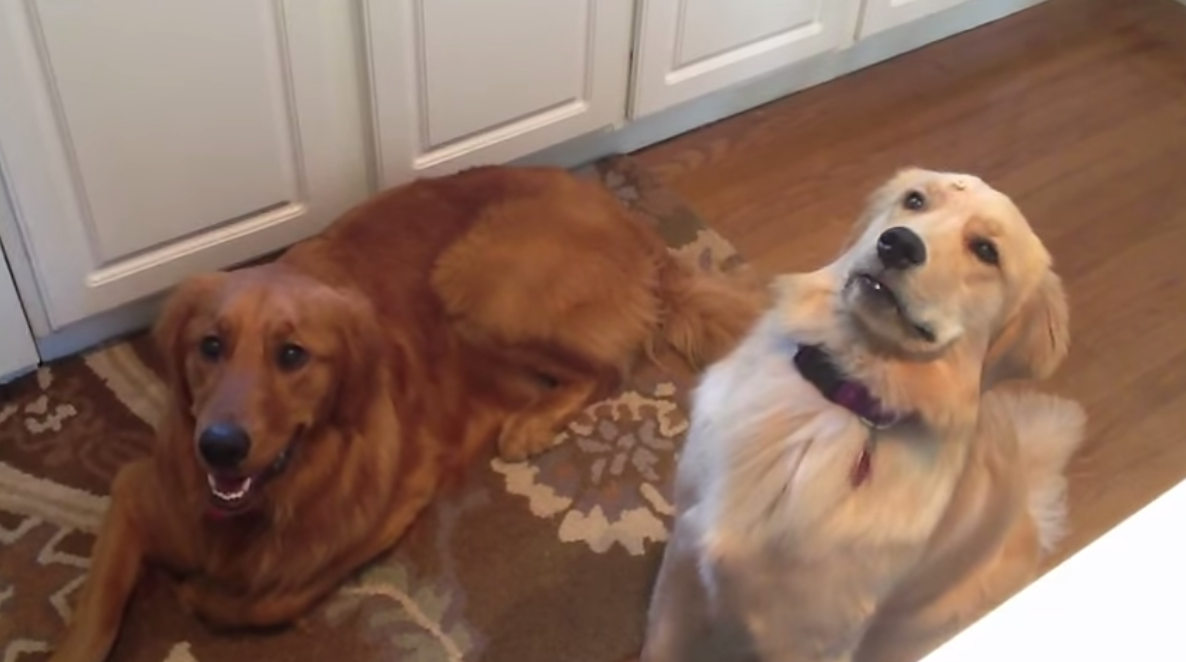 Could watch dumb dog videos for YEARS and never get bored.

PS - Complete opposite of the dumb dogs:


Eclipse is an official member of the #B2DB (bad 2 da bone) club. I see humans every day that struggle with taking public transportation, and Eclipse is out here just clowning on the bus like it ain't no thang.

PPS - I feel like the only thing that would mess with Eclipse would be Ventra. Even Eclipse would get frustrated dealing with those fuckboxes. 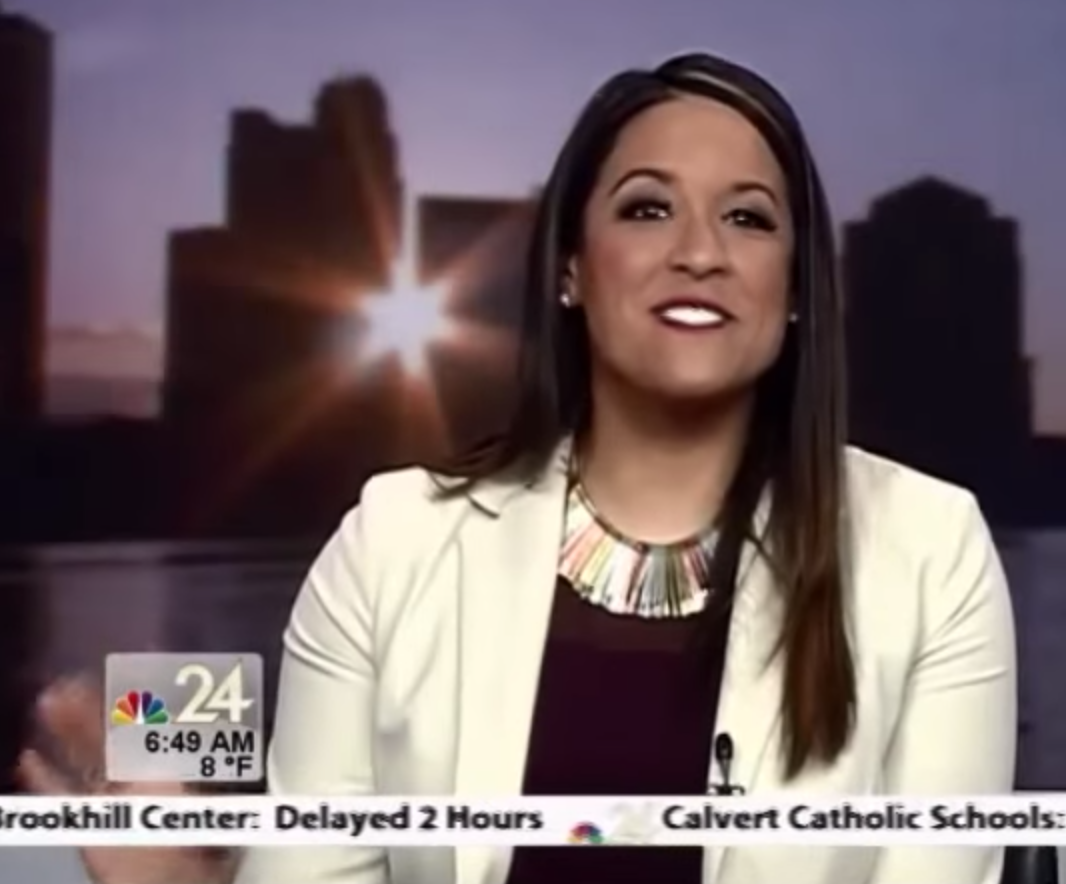 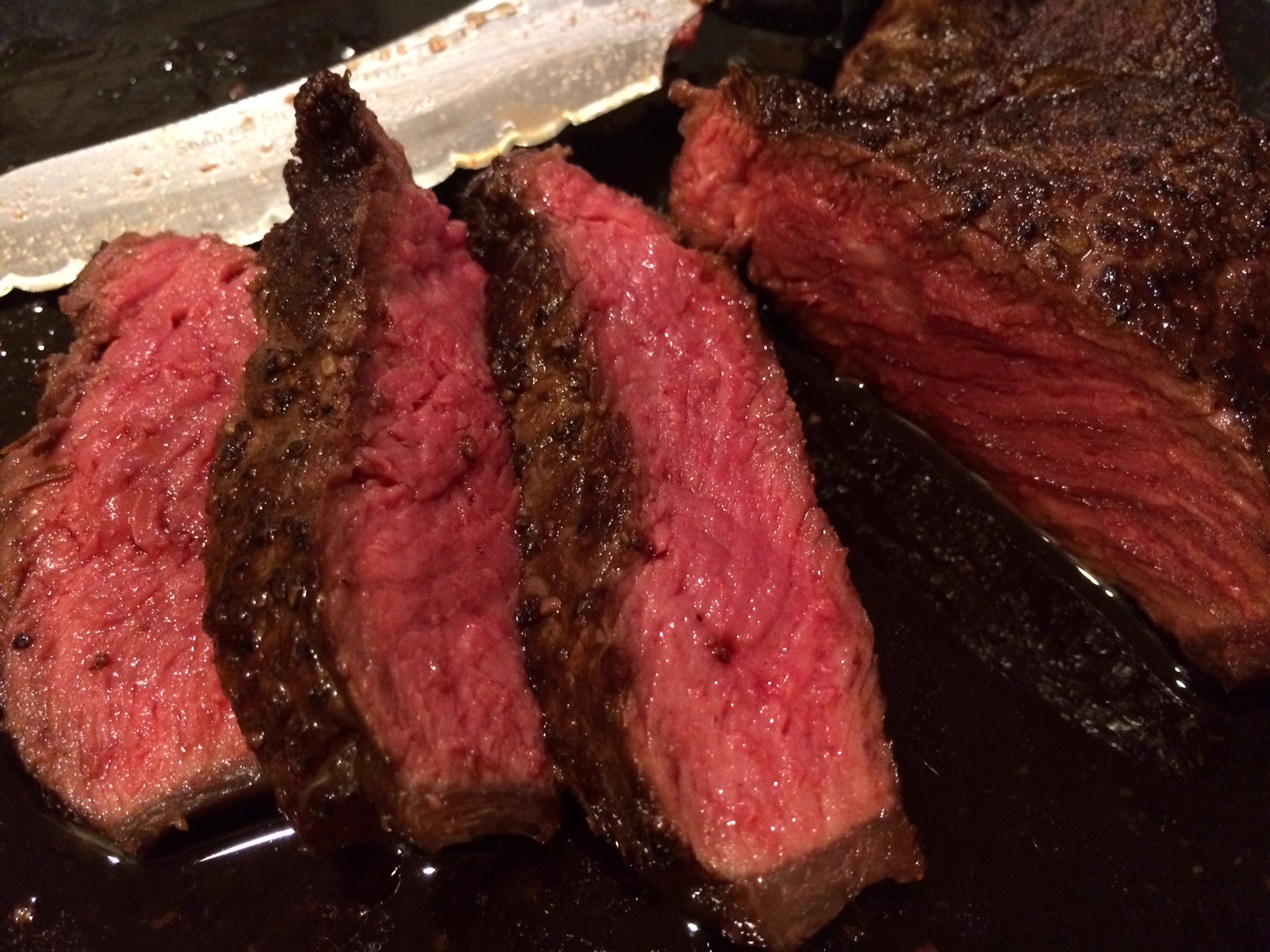 Now that is one fine ass piece of meat. And I MADE this meat! Boom, so proud of myself. Cooked a perfect steak without having a grill or a sweet cast iron skillet. I consider this some kind of MANCHIEVEMENT.

PS - I refuse to do steak power rankings because I secretly LOVE filets and I only order NY strips and ribeyes because filets are small and people are JUDGEY. The only place in the world I'll actually go ahead and order a filet is at Coerper's 5 O'Clock Steakhouse in Milwaukee. Their filet is huge and charred up on the outside while still perfectly pink in the middle. That filet is worth all the money and I don't care if you look down upon me while chewing on the fat in your ribeye.

PPS - I don't think prime rib is considered a 'normal' steak since it's weird looking and one of those 'only available on Friday nights' kind of things, but I love me some prime rib. #steakthoughts 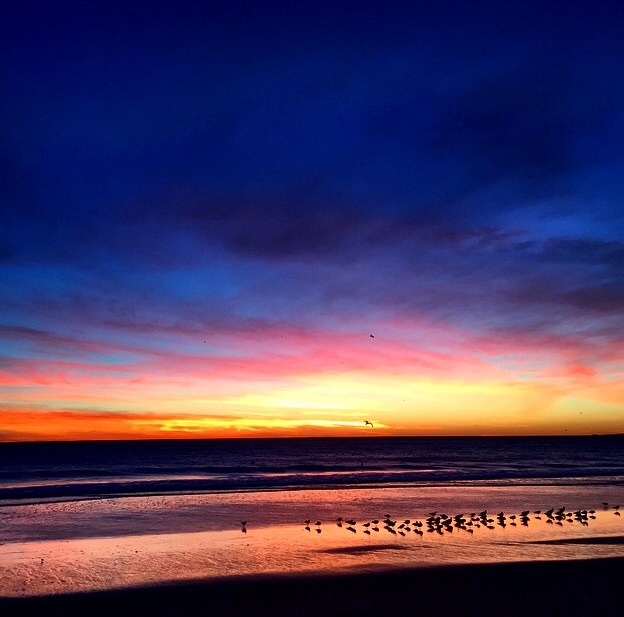 Another hot sunset sent in by one of my friends. Oh, aren't you so cool living in California with sexy sunsets on the beach and birds frolicking around in the air without a care in the world. WHATEVER. You know we're closer to spring than we are to fall now? That's right, past the HALFWAY POINT of winter. Soon to be IN YOUR FACE people who live in nice weather year round. Find something new to brag about.

I AM A JINX MACHINE.

ON WISCONSIN
Posted by Schwa at 6:28 PM