EAT IT, AUBURN. You can keep your SEC Speed. Bet you wish you could recruit some B1G GUT: 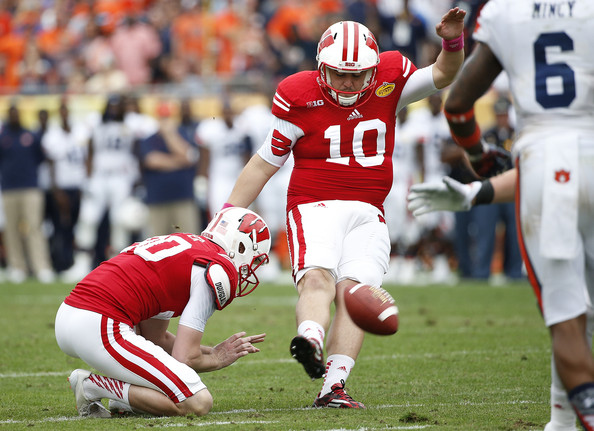 AMERICA THE BEAUTIFUL. I wrote this back in August and couldn't be more thrilled with how it turned out:

End result? 19/22 on field goals, including drilling his last 14 attempts. And the last 2 ended up tying the game against Auburn and then winning the game in overtime. I don't think it's remotely lame to be this excited about a kicker. And we have him LOCKED IN for the next three years! #GAGLIANONE4EVER

But what a fun game that was. MGIII gave us one last performance of GREATNESS. The O-Line was in beast mode all day, even after losing their center. The defense was up and down, but boy were they good when we needed them most. And Sunshine overcame a real rough game to lead us to the tying and go-ahead field goals. Barry gets to (hopefully) end his coaching career in the 'W' column, and Chryst takes over a team coming off an 11-win season with a chance to beat Auburn and Alabama in consecutive games. YAY

And then there's Bo Ryan and the hoops squad. They are KIND of good. 15-1, clicking on all levels, ready to abuse the rest of the conference before going for some hardware. Not too difficult to transition from football to basketball when you say goodbye to an 11-3 team and turn your attention to the 4th ranked team in the country. GOLDEN AGE


CHICAGO BADGERS: It seems a little crazy to make plans for every hoops game, especially given that there are like 20+ games left this year. My recommendation is always to take advantage of the big ones and the Saturday games. 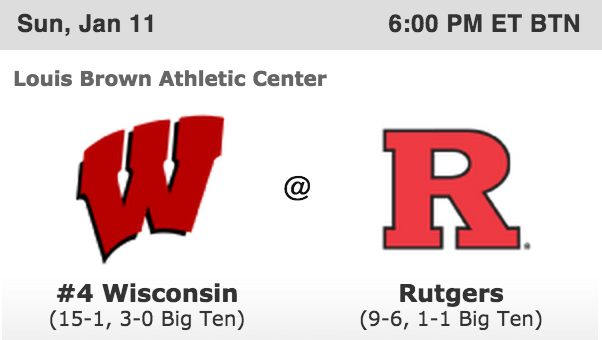 2) Ohio State, 13-3 (2-1). The #2 spot in the FEAR RANKINGS is gonna be one fickle bitch all year. Nothing I've seen so far this year makes me think all the 'Wisconsin and then the rest of the conference' preseason chatter was inaccurate.


PS - Seriously I never doubted it. Here are all the scenarios where I will actually start to believe we might lose:
That's all I got. Until we go up against Duke again or Kentucky, my faith shall remain UNWAVERING. Excuse me as I go knock a fucking hole through my nightstand before I jinx this whole goddamn thing.

Well ain't that some shit.

6) Michigan State, 10-5 (1-1). I don't have much to say about Michigan State this year. They don't seem as loaded as they usually are, but I'm sure they'll be fine come March. Instead, here's the best Tinder profile in the game: 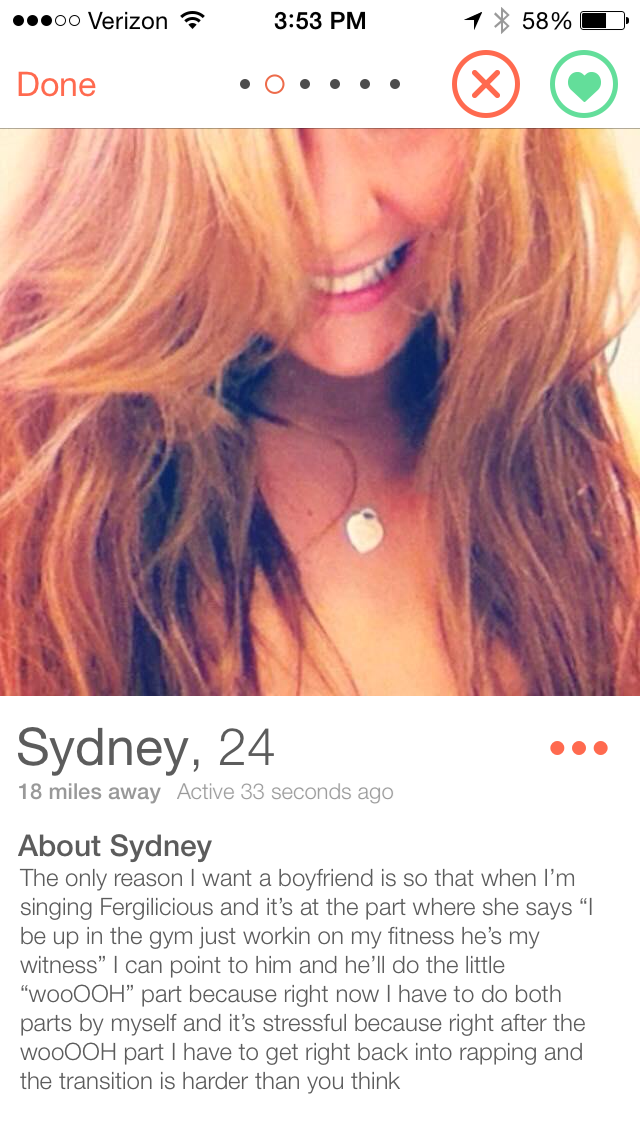 RUTHLESS honesty. Absolutely love that she wrote this as one giant run-on sentence. What a keeper. 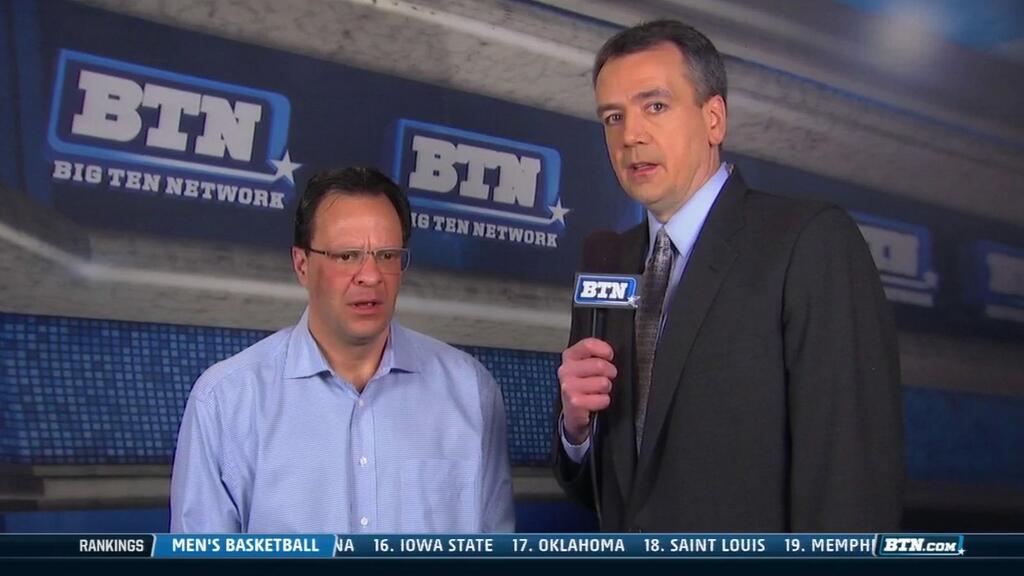 10) Illinois, 11-5 (1-2). Illinois loses their best player and then immediately beats a top ten team. If you think you understand college hoops, you are LYING to yourself and all of your family. 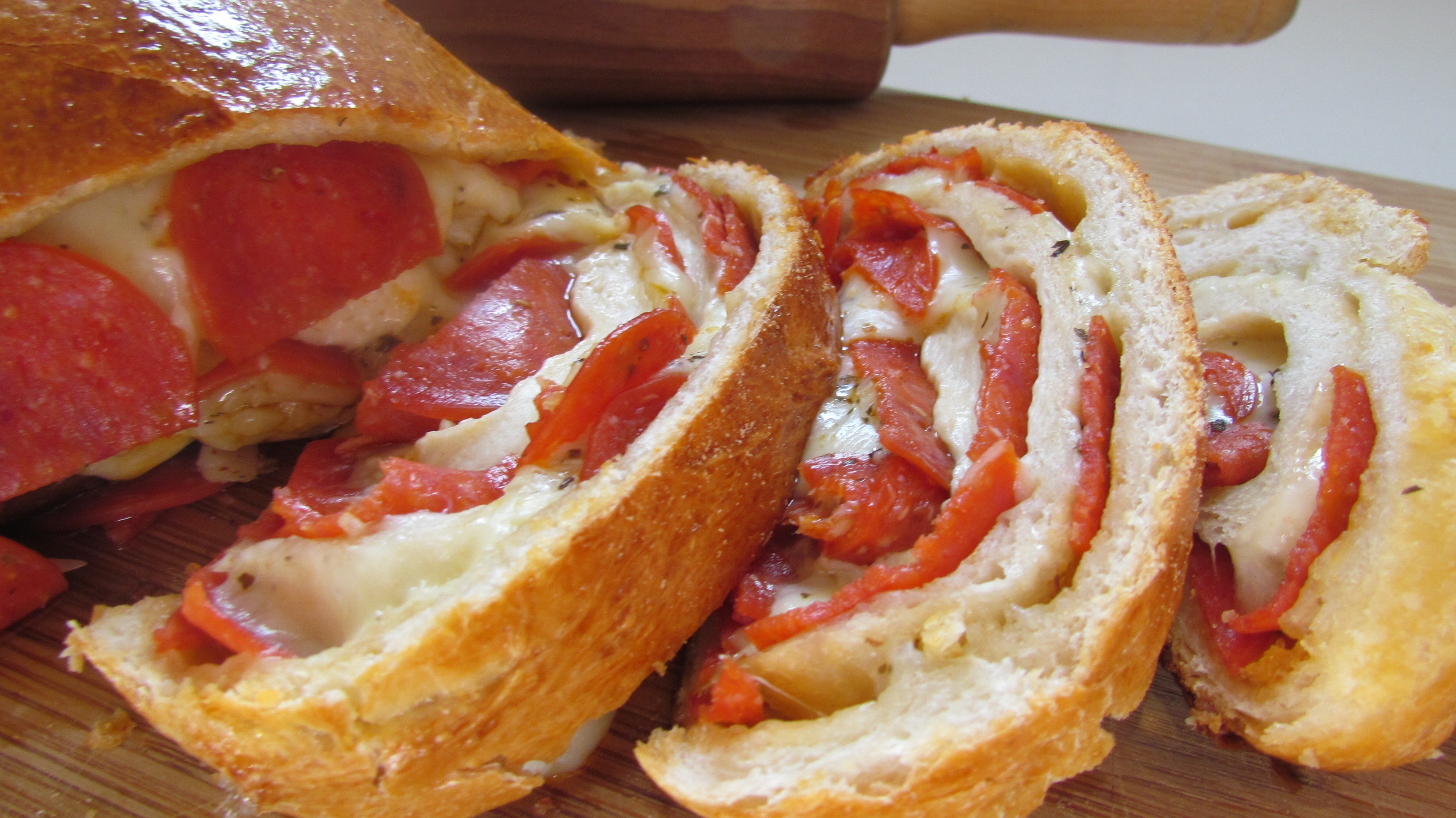 ;ALSKDFJ IT'S PEPPERONI BREAD! No, it is NOT a stromboli. That is PEPPERONI BREAD. Holy hell I'm way past wanting that on the menu at Pepperoni Toni's. Good to know the geniuses of the world are solving the big problems, like how to stuff pepperoni into more things.

PS - Can you imagine the spicy cheesy bread from the Madison Farmer's Market... CON PEPPERONI? I die.

Seriously. How many of you could tell me the full names of NJIT, EMU, and SMU without looking it up? I'm gonna guess at least 80% of the people reading this would mess up at least one of them.

14) Nebraska, 8-6 (0-2). Whatever. I've never been convinced these guys were legit. Last year they couldn't beat anyone outside of their gym. Not much has changed as they're 1-3 outside of Nebraska this year. And they're dropping games at home against IU? WOOF WOOF

Most People are calling this the best album of the year. At the very least its the best Hip Hop album. El-P has never made beats this consistently good before. "I will never condescend. Now spread yourself" (JQW)

And if you don't know how to pronounce their name, get educated. (@DannyGoldin)

This video? Weird. This song? FIRE. I am shocked that it only has 35,000 views on YouTube. This song needs to be a hit and be played everywhere because I really like it and I'll feel really cool if I ACTUALLY got in on the bandwagon express before it left station.


Wisconsin's Frontcourt vs. The Rest of the Universe


Frank, Dekker, and Nigel. They are not fair. I have no idea how teams gameplan to stop them. Yeah, I know the Duke game was a thing, but whatever. Exception, not the rule. Everyone else is going to have to figure out how to stop guys that are shooting 57%, 62%, and 65% on two pointers and 38%, 39%, and 37% on threes. Those are incredible numbers for big men. Those are incredible numbers for anyone.

It's a selfless group of remarkably talented players doing their thing under the tutelage of Bo Ryan. Again: that is not fair. Good luck, Big Ten.

Back to hoops season

Thank god we have Bo Ryan

Now this is my kind of prank. Love how the brother keeps getting got by his sister with the exact same move, and he just keeps on falling for it. I'm also a big fan of the move where someone asks you to take a picture of them, and you flip the camera so it's on selfie mode and take a MILLION selfies. But they don't realize since you're still holding the camera with the rear lens facing them. I have no idea why girls kept asking us to take pictures of them on NYE: 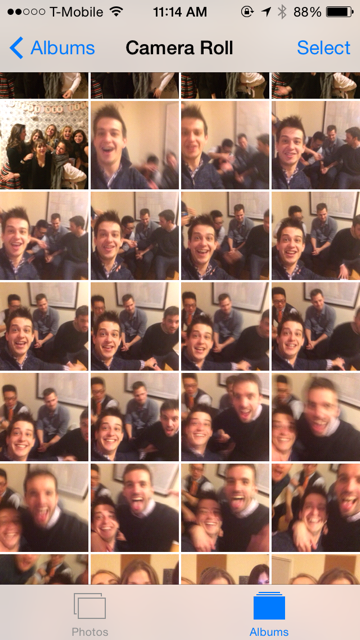 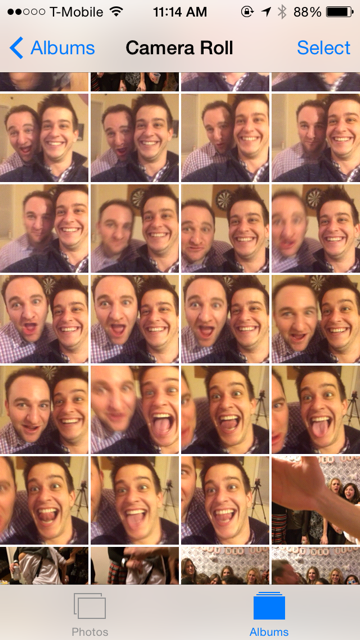 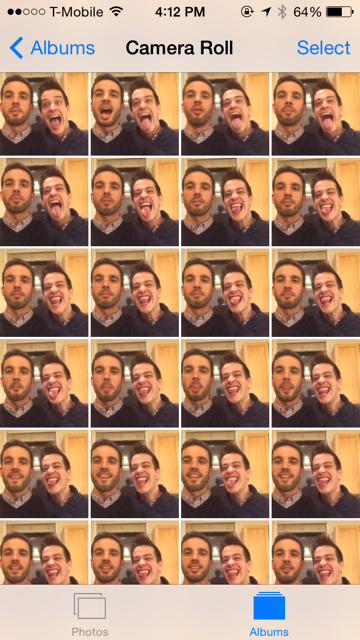 Then again, I have no idea how that guy kept falling for his sister's little video prank. We live in such fascinating times.


Rule #1: Do not fuck with Gaston. That man is a beast and he WILL embarrass you in front of all your peoples. This isn't the first clown to come at Gaston: 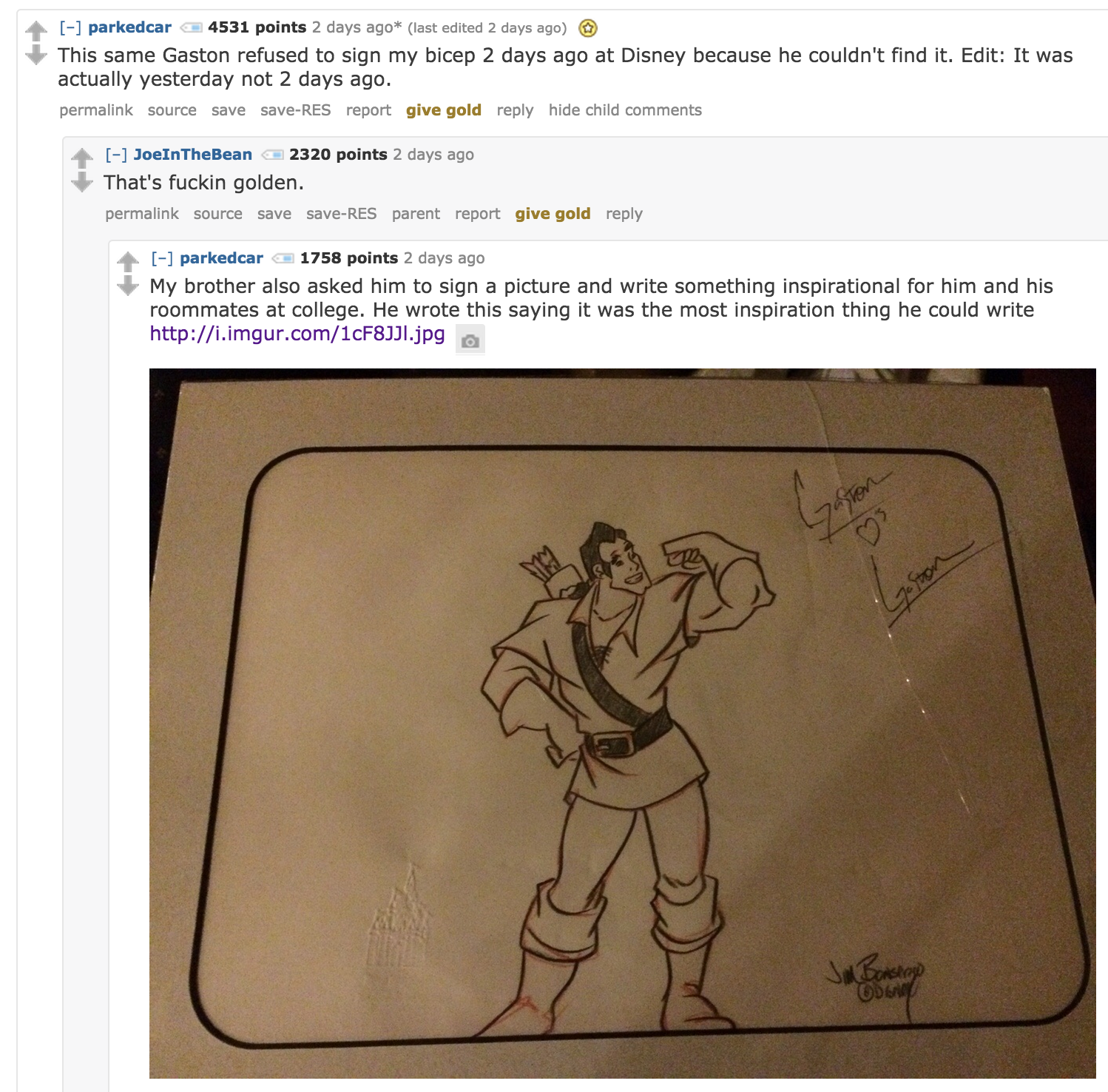 This is a fireworks factory in Colombia blowing up. It is intense. And from there we go to...

A fireworks factory in Denmark exploding and WHOA HEY LOOK AT THAT SHOCKWAVE! That's amazing science in action. Almost as amazing as...


OMG LOOK AT THE VOLCANO EXPLODING AND LOOK AT THAT SHOCKWAVE! I had no ideas shockwaves were real and this cool. Once it busted through the clouds I was just PRAYING it was gonna get to the boat. Fucking sweet.

PS - Are these people, like, volcano watching instead of whale watching? You must have a better chance of seeing a whale than seeing a real live volcano go BOOM in front of you. Unless this volcano goes off every 2 hours like a geyser, that was insanely lucky. It also didn't sound like Pierce Brosnan narrating there, so we can rule out them having the world's foremost expert on volcano whispering.

PPS - "Watch out for the shock, it's coming... hooooolyyyyy sssssmokin' toldeos!" Isn't 'holy toledo' an American phrase? That guy sounds like he's from some kind of OUTBACK. I'm all twisted up here, but I still like him.

PPPS - All those fireworks factories exploding just makes me think of this: 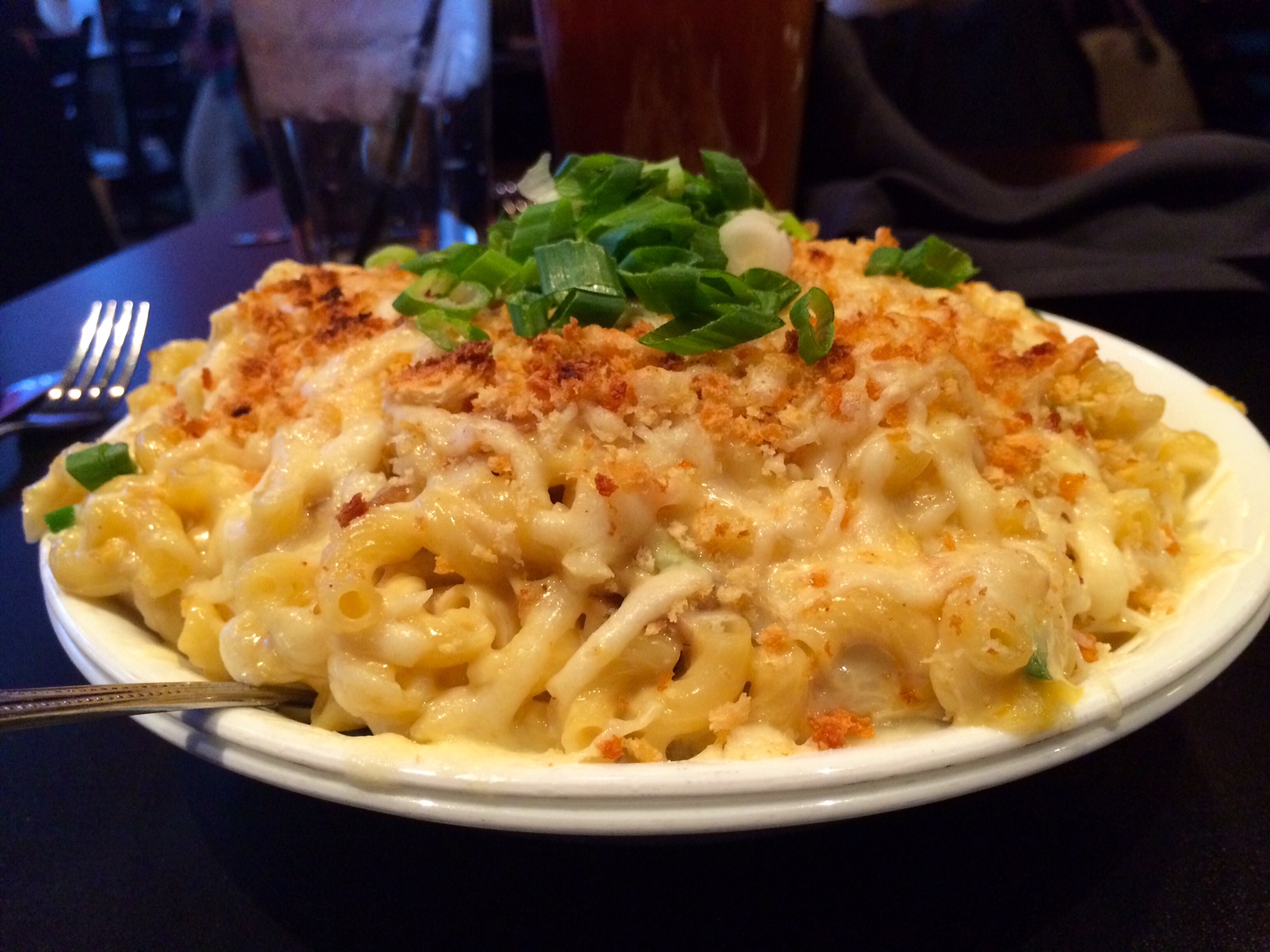 Mac and Cheese with scallions, caramelized onions, garlic, and DAMN YOU KUMA'S TOO YOU FORGOT OUR JALAPEÑOS. Weeks later and we're still in a fight. Jalapeños are an ELITE Mac addition. Without the jalapeños, this was still incredible. But OH WHAT IT COULD HAVE BEEN if they got the order right.

I've said it before and I'll say it again: Kuma's has the best Mac and Cheese in Chicago, and arguably the best in the entire world. It is DIVINE. And enormous. Like 5 meals worth of Mac. Mmmmmmmmm.

Beautiful sky captured by a friend of mine. Now that the days are getting longer, we're approaching POST-WORK SUNSET TERRITORY. That is an incredibly important territory. Being able to catch some #skyporn after leaving the office is what life is all about.

There's a good chance we're going to lose a game between now and March. It's bound to happen. It almost happened last night against Purdue, and you know every team is gonna come out guns a blazing against us. Target's on the back. Blah blah blah. But I can't imagine a scenario where I expect us to lose. Team is too good. Don't need a bunch of fancy words here. Let the good times roll.

ON WISCONSIN
Posted by Schwa at 3:09 PM