Where does the time go? TWO regular season games left? 2 weeks until the NCAA Tournament is underway? How is this possible? Didn't this beautiful, historic season JUST get underway, like, 10 minutes ago? I suppose the age-old saying applies here: time flies when you're having fun. And if #WinningIsFun, and we've been doing a lot of winning... 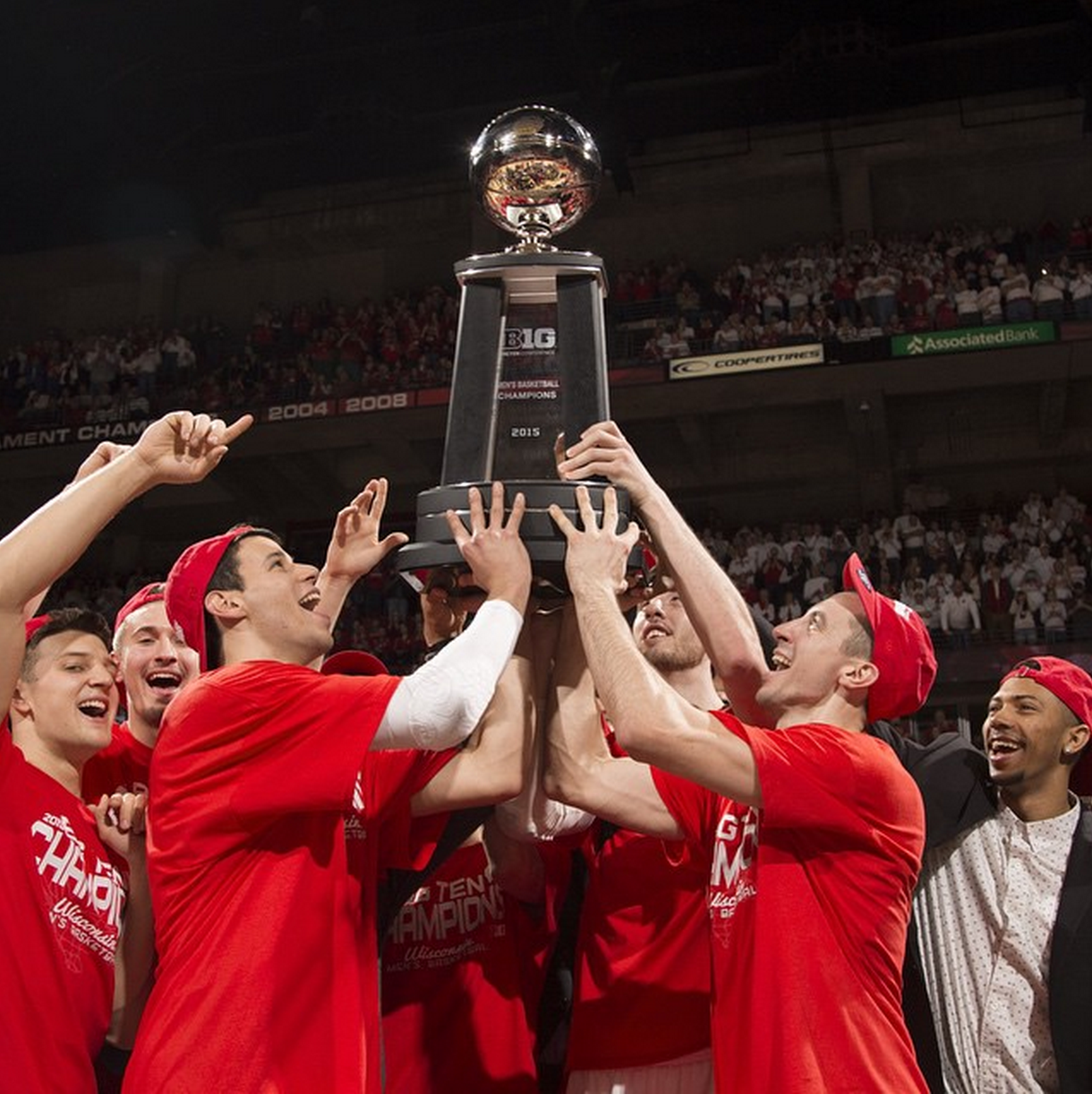 TRANSITIVE PROPERTY APPLIES. It's pretty nuts that we haven't won a Big Ten Championship in like 7 years. But we all knew this team was going to be the team to take care of business. It was never really in doubt, even after Maryland closed the gap a bit.

Two trophies down. Two to go. Plenty of work to be done, and the real fun is just around the corner. Nothing else needs to be said:

CHICAGO BADGERS: Looking forward to gathering the troops at Will's once the BTT starts. And if you're thinking of watching the NCAA games anywhere else you're a damn fool. Believe that.


I positively cannot get enough of this. SHE LOOKED GUHHDHDHDHDH! SHE LOOKED FUGHINGHGHGHGHG! Slays me every single time I give Travis a spin. I want my OWN Travis! Good thing Amazon exists and I can buy my own for $29.99. But there's no explanation anywhere on how to cast a demon inside Travis' soul. If I'm paying top dollar for my Travis, he damn well better be possessed.

You can call me crazy all you want, but I firmly believe that on that fateful day in April when Bo hoists the National Championship trophy, the demon inside Demonic Travis The Soulless Trout will be released from its doo wah diddy diddy dum diddy doo chamber of death. On that day, Travis will be REBORN as Travis The Singing Trout. We'll save you, Travis.

PS - While we're on the topic of our #SpiritAnimals, it's time for a quick Khali update: This shit is meant to be.

2) Maryland, 25-5 (13-4). A BTT Championship matchup against these guys on a neutral court would be splendid. Let's make that happen.

3) Purdue, 19-11 (11-6). I bought a pound of honey roasted peanuts to keep as a snack at work. My thinking was that they're probably healthier than like a bag of chips or some other junk food. They're also DELICIOUS. I'm very afraid that I will down the entire bag in a day. You see, this is why snack foods should ONLY be sold in tiny, individually wrapped packages. The people who decided to start shipping goldfish in industrial sized gallon jugs were EVIL. They prey on our lack of self-control. If I can fit my entire fist into the container then it is too big and therefore dangerous.

PS - Woooooo that last sentence is a doozy upon rereading. #RuleOfFists

Nevermind. Still plenty of time to fuck this one up!

6) Michigan State, 20-10 (11-6). We were talking about the Apple Watch at work the other day and I did some googling to see what was out there. Apparently this is how it's being marketed: 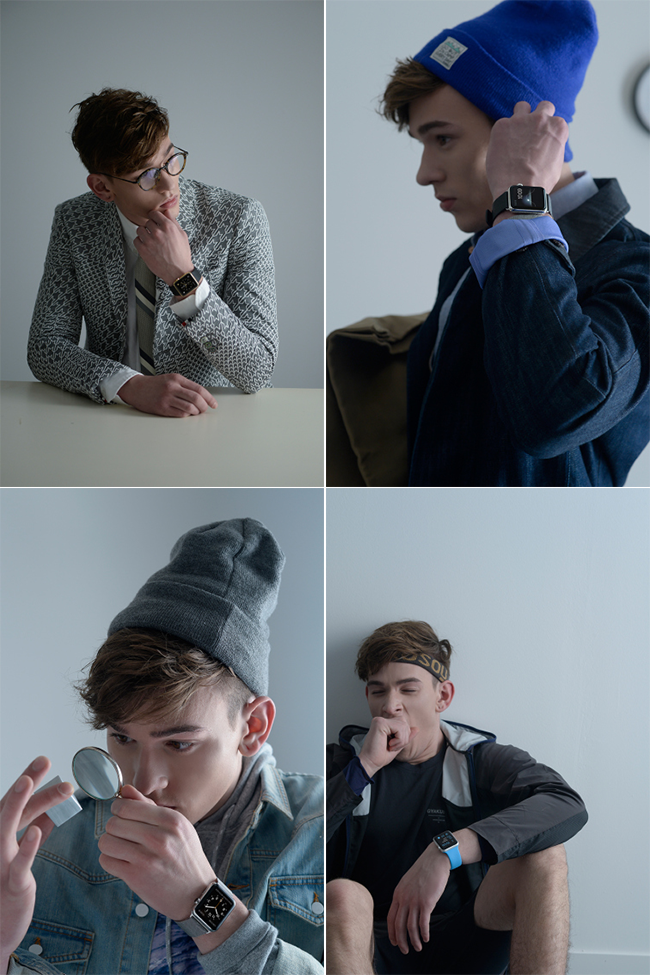 I could probably make some comment about hipsters... but what the fuck is even going on in the bottom left picture? By far my favorite. Where did that magnifying glass come from? Is THAT what you're supposed to keep in breast pockets on jean jackets? What is he magnifying? WHY IS HE MAGNIFYING? I demand more answers.

It also reminds me of the model in Seinfeld that Jerry sits next to on the plane when he can't figure out what she was modeling. The Apple Watch is the crumpled pair of jeans slung over the chair in the corner. I look at these pics and all I see are hipsters and some weird headband thing and is that a suit I think that's a suit and since when did half wearing your hat become the thing to do and OH FOR FUCK'S SAKE WHY DO YOU HAVE A MAGNIFYING GLASS

PS - I don't want to doubt Apple on the record, but I don't really get the Apple Watch. I can't think of one thing it does GREAT. What VOID is it filling? Do people want to charge their watch at least once every day? Are people going to buy new watches every two years like iPhones - even without their phone company paying for the upgrade? I just don't get it.

I say this knowing full well they'll sell BILLIONS of them. Apple's incredible.

7) Northwestern, 15-15 (6-11). Winners of 5/6, including a double overtime THRILLER against Michigan Tuesday night. LOOK AT THE BIG BRAINS ON THE NERDS


As the hermit crab grows in size, it must find a larger shell and abandon the previous one. Several hermit crab species, both terrestrial and marine, use vacancy chains to find new shells; when a new, bigger shell becomes available, hermit crabs gather around it and form a kind of queue from largest to smallest. When the largest crab moves into the new shell, the second-biggest crab moves into the newly vacated shell, thereby making its previous shell available to the third hermit crab, and so on. Hermit crabs often "gang up" on a hermit crab with what they perceive to be a better shell, where they will actually pry its home (shell) away from it and then compete for it, and one will ultimately take it over.

PPS - Man. Sometimes life really throws you a curveball. You could be sitting there all happy because you found your third #SpiritAnimal, wondering how long it will be until the next one strikes and BAM: you google 'hermit crabs in weird shells' and discover Harry The Hermit Crab: 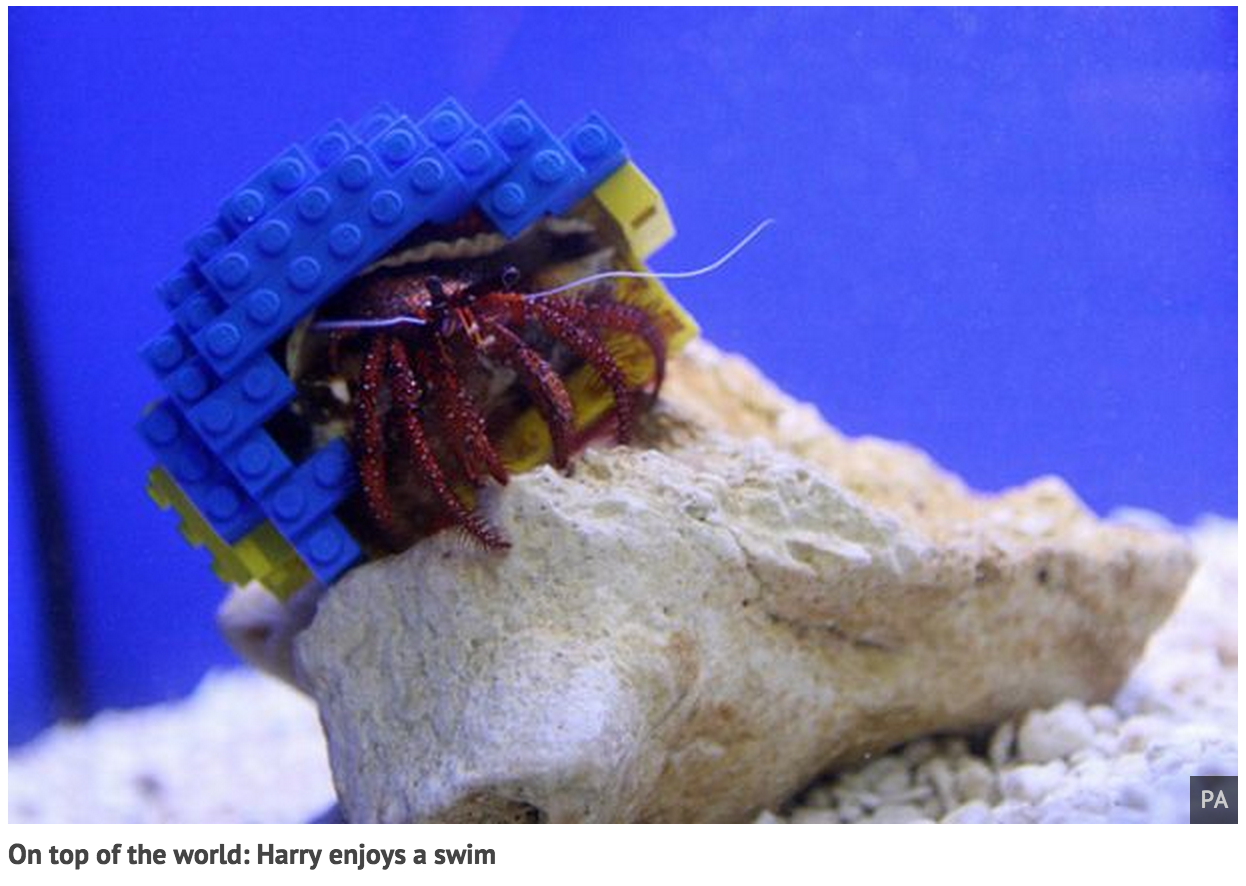 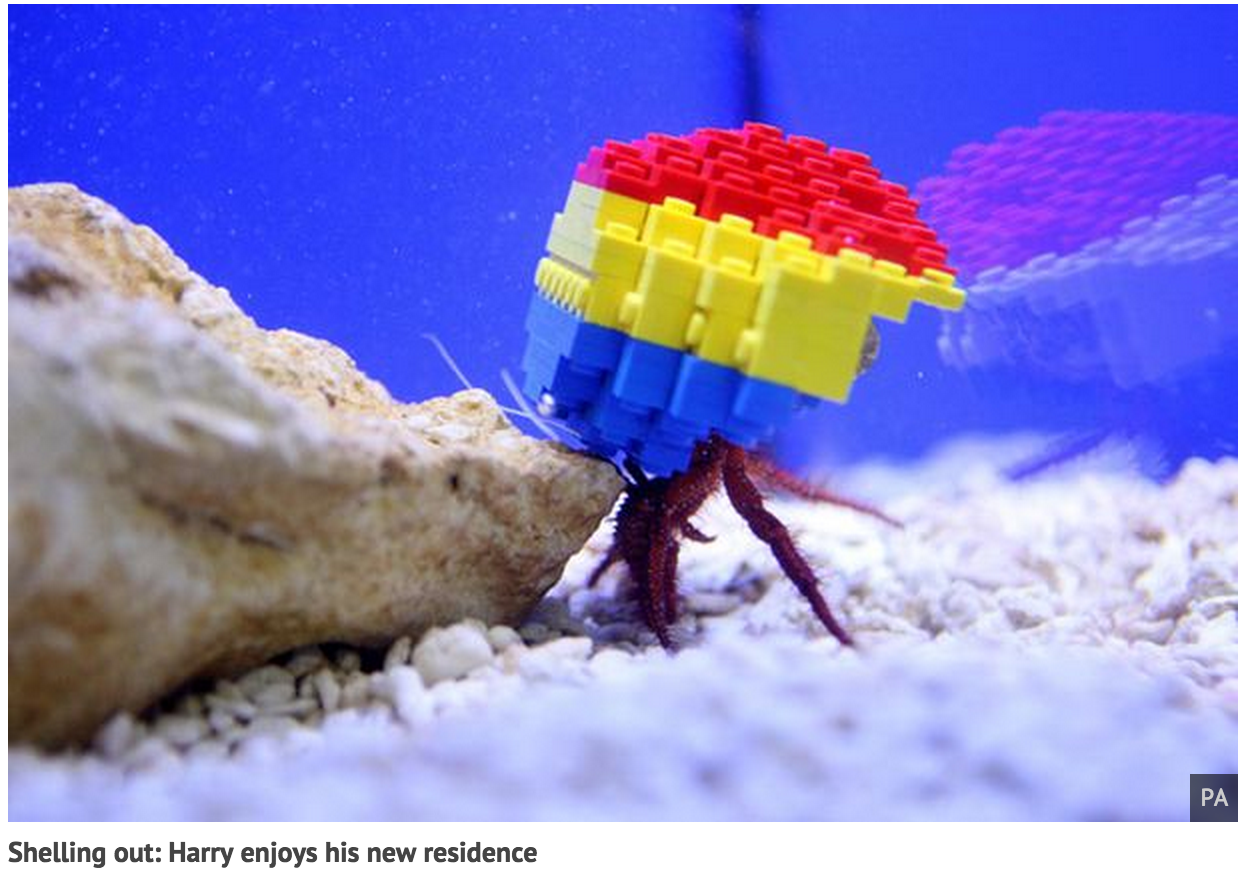 LEGO SHELL. Harry The Hermit Crab took one look around his aquarium and decided all the shells in there were not up to his standards. So what does he do? He finds the little Lego home his caretakers built and uses that as his shell. Life gives Harry lemons, Harry makes a Lego lemonade shell-mansion for himself. I fucking love this little guy.

PPPS - I have no idea why, but Harry is a damn good name for a hermit crab.

11) Nebraska, 13-16 (5-12). Petteway's offensive rating is 94.2. That would put him somewhere between Vitto Brown and Duje Dukan in terms of efficiency. That is not good. 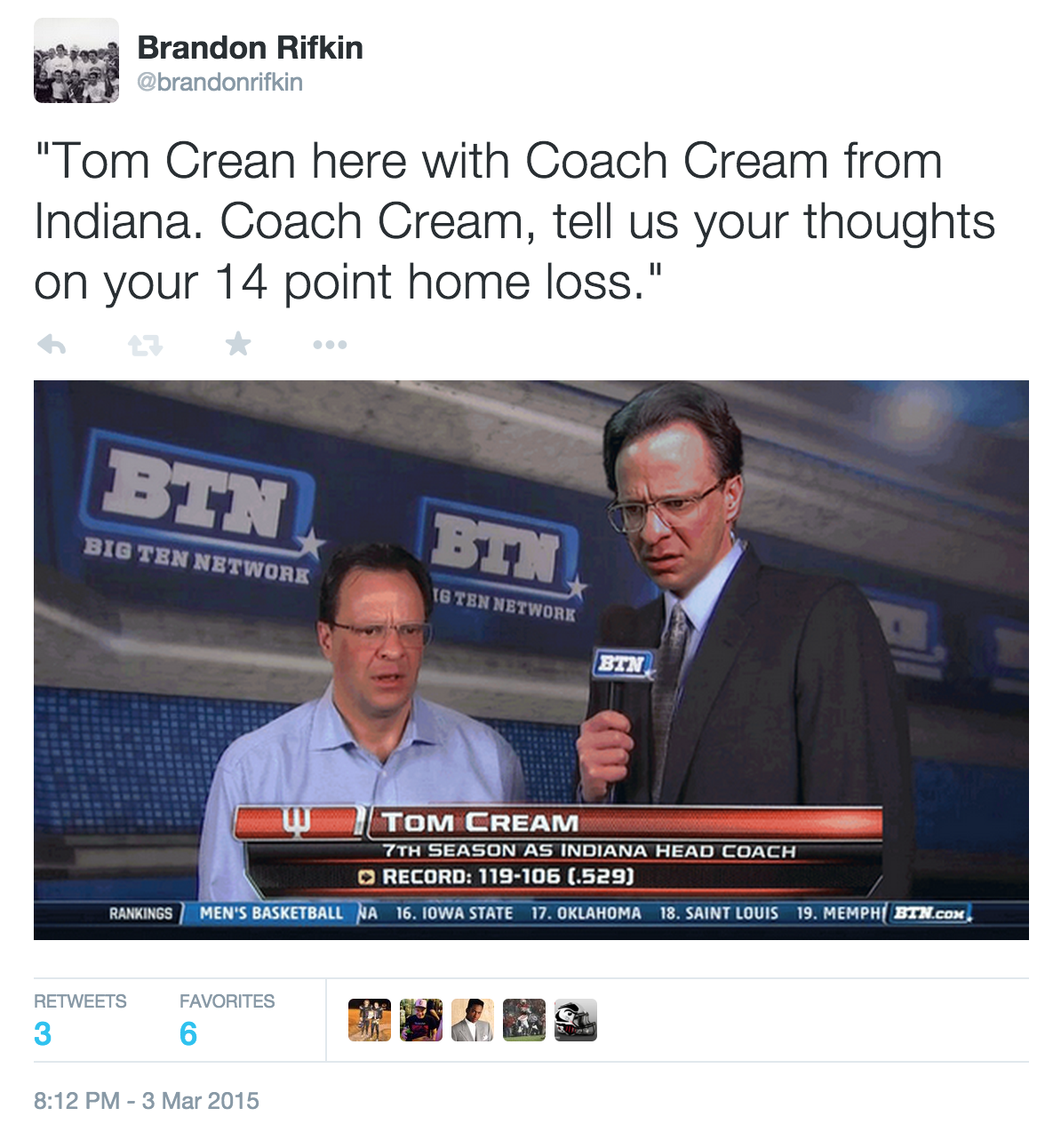 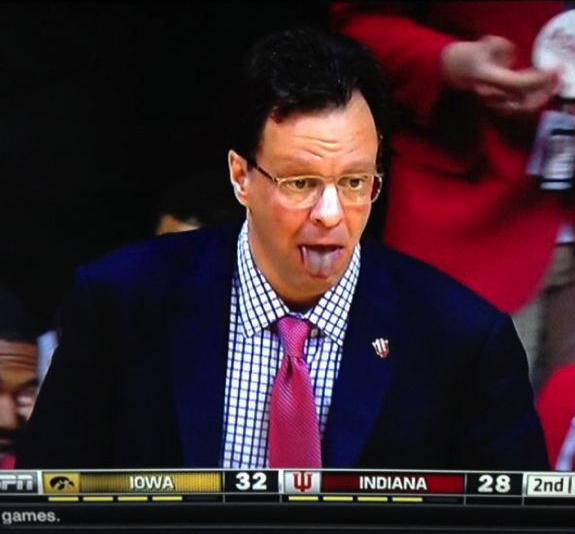 PPS - I think my next project is designing the CREANMOJI

14) Rutgers, 10-20 (2-15). Today I learned that the longest word I can type with one hand is stewardesses. And that is more interesting than anything else I could possibly say about Rutgers hoops.


Tink is a 19 year old from Chicago who's got a great flow. She's knowingly copying Biggie here but it kind of works, especially because she's making fun of people for being on Instagram too much. Shit is produced by Timbaland who will live forever, but you will die alone and having accomplished nothing. Tink! (JQW)

For those who don't know Action, he's a fatass-Jewish-white-dude-former-respected-chef-turned-rapper who, despite those aforementioned qualities, actually carries a lot of respect within the rap community. This new video of his is awesome, and serves as a great appetizer for his upcoming debut album. (@DannyGoldin)

She's coming to Chicago March 24th and tickets are only 10 bucks. You know what that means? On a random Tuesday during Wrastlemania Week we can FALL IN LOVE FOR THE WEEKEND

Two leading contenders for B1G POY square off in what could be their only meeting of their careers. The difference is that OSU probably needs Russell to go off. Wisconsin could win with Frank having a pedestrian day. OSU doesn't really have a Dekker, a Nigel, a Koenig. Luxury is a fine thing. Regardless, I'm looking forward to the two best players in the league battling on the same floor. Should be a fun one on Sunday.

One game before tournaments

Let's end with a win

My fear of electricity alone will prevent me from ever trying to do some wiring on my own. But this just confirms what I've always known: pay a damn expert to do shit like this. It's why they exist.

Also, once he started controlling the light with the blow drier I damn near cried.

This baby is basically me, except not in a bar and with Blank Space instead of Shake It Off and she's a little skinnier than I am. Otherwise, twinsies.

I don't believe that the first guy was an actual news anchor. Not dressed like that. But I like a good Hamburglar burn. HAMBURNGLAR

PS - The Hamburglar is a moderately terrifying creature. Why does no one go as The Hamburglar for Halloween? Does that cross the line from clever to genuinely scary? Ideally the person going as The Hamburglar has a friend randomly give burgers to people at a party before he OR SHE shows up, and then The Hamburglar BUSTS IN and steals everybody's burgers before they can eat them. This would undoubtedly be the best Halloween party you've ever been to and it would live on in Snapchat infamy forever and ever.

PPS - Backup idea, just go as The Hamburnglar. Same outfit, but instead of stealing burgers you drop hot fire burns on everyone in the party. Walk around insulting people left and right. This might work better if you're at a Playa Haters Ball themed party, which would be an AMAZING theme for a party. 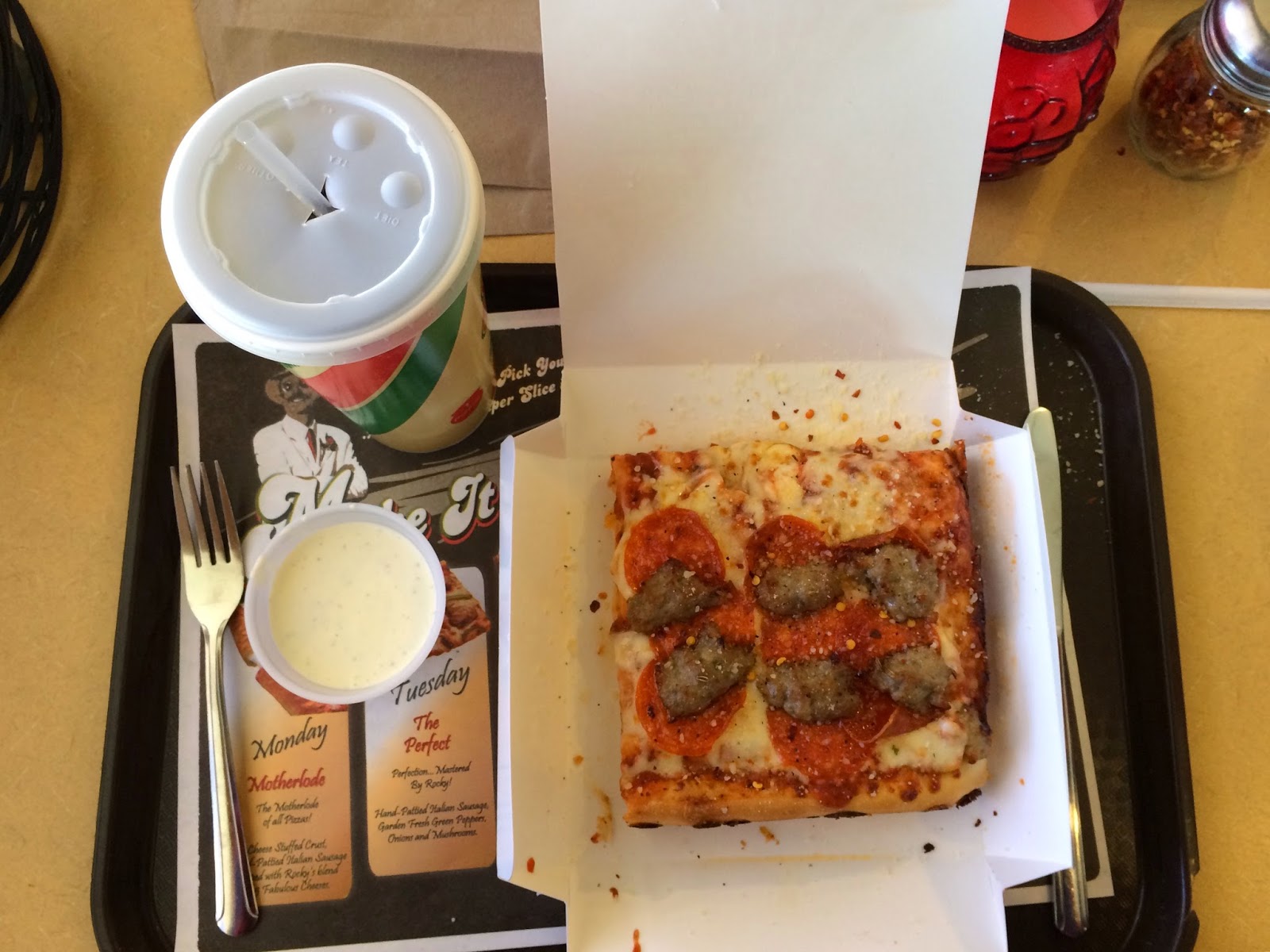 The day I stop loving this is the day I no longer wish to live. Oh how I miss the days of dropping off the rent check at MPM and swinging by Rocky's to celebrate. I'm aware that you shouldn't celebrate turning in a rent check, but you're talking to the same guy who celebrates haircuts with food as well. Growing up it was Culver's in Mequon after a haircut. In Chicago it's Noodles post-chopping. I'm an American and I'll celebrate non-celebratory events with delicious food because I can and I want to. 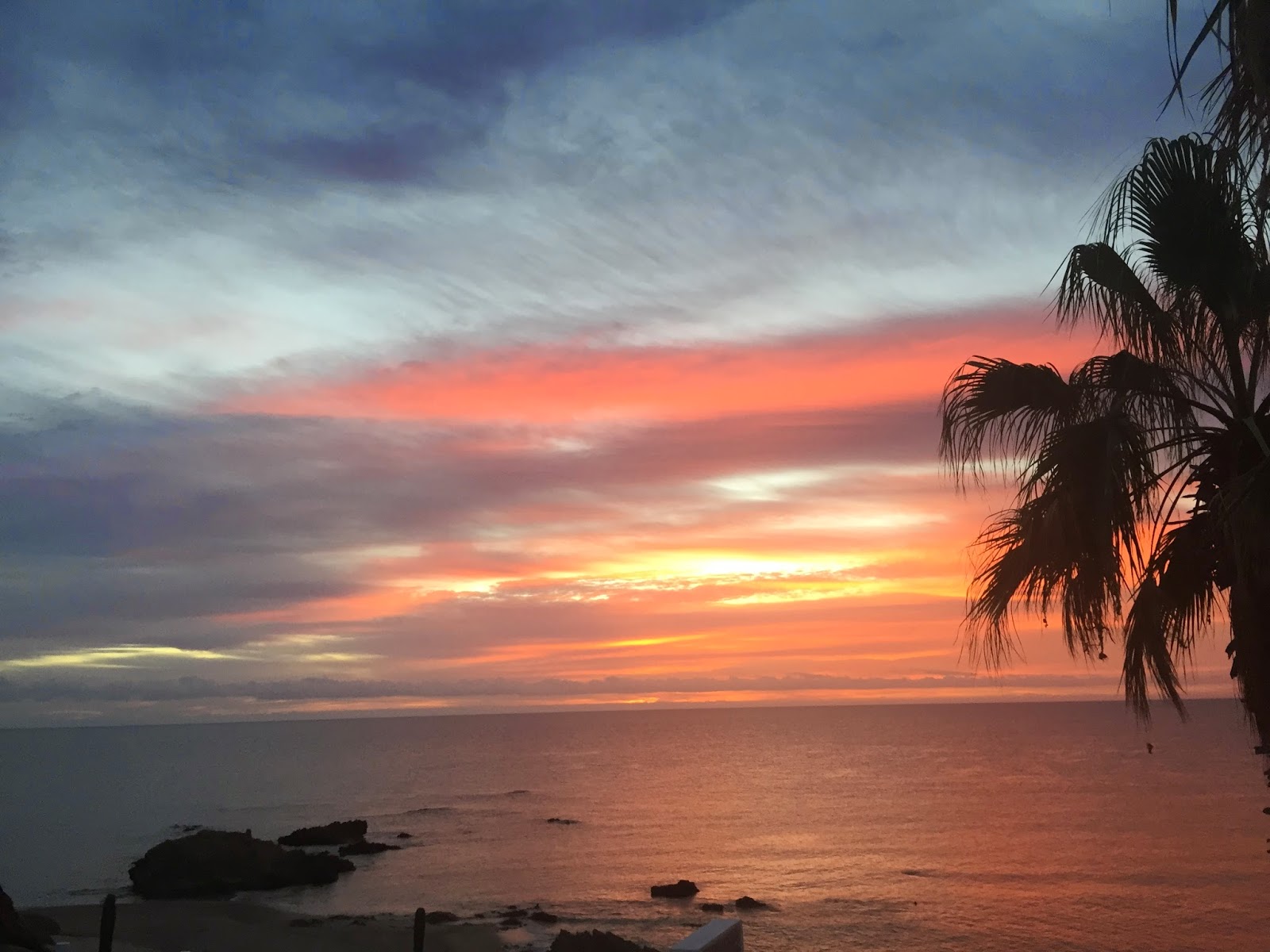 Good stuff from a co-worker in México. It's only mildly depressing that this section turns into 'Brandon's friends send him pictures from their tropical vacations while he puts up with the coldest February in the history of the world' every winter. But hey! At least today isn't about to be some kind of record setting coldest March 5th ever!

BRING ON THE BUCKS AND LET'S GET READY TO DANCE


ON WISCONSIN
Posted by Schwa at 4:48 PM