Up to #5, merely another indicator that we control our own DESTINY. And that destiny is staring the obnoxious Michigan entity square in its eyes. We all knew the schedule this year was backloaded: Iowa, Michigan, and a potential B1G Championship game would give us our 3 toughest opponents in our final 4 weeks. All the handwringing just goes to show that when it comes to college football rankings, it's as much about when you play as it is about who you play.

So buckle up for this one. It's going to be miserable weather for two teams with struggaling passing games and lockdown defenses. Enter the cliches about whoever makes the big plays, wins special teams, minimizes mistakes, has more heart, wants to win more than the other guys do, and leaves it ALL on the FIELD.

Win and we go grab an axe on our way to Indy for the biggest Badger game in the history of EARTH. Lose and we can scientifically confirm there is no god. Any way you slice it, there's a lot on the line Saturday.

Walk The Moon's new album dropped and it's alright. I think this is my current favorite (other than One Foot, which has been bumping for weeks), and it's good to see they can still make SOMETHING listenable. I was kind of worried they were just going to fall off the pop alternative cliff. Still am kinda worried. A little worried.

1. Ohio State, 8-2 (6-1). I'm not sure I can imagine a worse scenario than OSU curbing us in Indy and making it to the Playoff with 2 losses. WE MUST PREVENT THIS ATROCITY

2. Wisconsin, 10-0 (7-0). It cannot be overstated how impressive this team has been given the injuries that have piled up. Losing your defensive captain and stud linebacker before the season begins is rough stuff, but watching a bunch of other important guys go down throughout the season would usually be the recipe for an 8-4 kind of year with losses to Northwestern and Iowa strewn in there. But not this team. Not this year.

PS - If Barry is the most important person to enter the UW program, I wonder if Chryst is #2 on that list. Not only is it clear he was the genius behind all of the offensive success we had before he left for Pitt, but he's got this program to a new height directly in the wake of the Gary Andersen debacle. Paul Chryst: A Guy You Wouldn't Want To Hang Out With But You'd Want Coaching Your Kid

3. Penn State, 8-2 (5-2). We had a big planning event at work and one of the program managers got donuts for everyone. YAY! Except they got exactly ONE kind of donut: some apple cider cinnamon thing. That's like ordering pizza for 50 people and getting 10 large cheese pizzas. DONUTS DEMAND VARIETY. Was it appreciated AND delicious? No doubt. But choice is what separates us from the machines. We learned this in The Matrix.

PS - Nothing gets me cooking like ordering a dozen donuts and gearing up for the inevitable 'want me to pick or do you want to pick?' question. THE PRESSURE! If you tell them they can just do it, you KNOW you're coming back with a blueberry croissant, two plain unglazed, and a day old vanilla frosted donut mixed in. But if you go at it yourself, things get real tense after donut #8. While you're debating the merits of chocolate frosted cake and frosted chocolate cake, 10 people behind you are stink eying you to DEATH.

4. Michigan State, 7-3, (5-2). This tweet should've disappeared into the ether of my feed, but something caught my eye:

PS - That clip looks like it was filmed in a different century. Getting old is weird.

6. Northwestern, 7-3, (5-2). Just watched the UW hoops team lose to Xavier and I am nothing but optimistic after that effort. That's a young team that's going to take some bumps, but they're gonna be a boatload of fun to watch this year and into the future. Happ looked beastly (stupid fouls still a thing, ugh), Iverson flashed, and Davison is gonna be hard to keep off the floor. Plus you gotta factor in the revenge factor for Xavier after Koenig ate their faces in the NCAA tourney. Rather have that win than this one a million times over. Pick it up and get back at it - big things ahead.

7. Iowa, 6-4, (3-4). We're all in on skycam, right? You gotta be a straight up hater to think it sucks. Mix in some normal cam, keep cycling through angles on replays, and we got ourselves an EMMY WINNING BROADCAST. 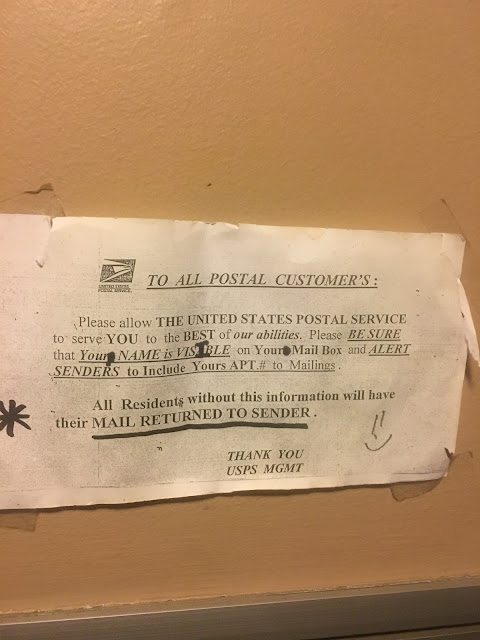 The arbitrary caps/bold/italics/underlined usage really screams out how serious the situation is. And who doesn't love a passive aggressive, grammar correcting neighbor?

PS - this building also has a buzzer system where the number you dial doesn't match up with the apt #. Trying to buzz apt 315? Dialing 3-1-5 buzzes apt 404. It's complete nonsense. 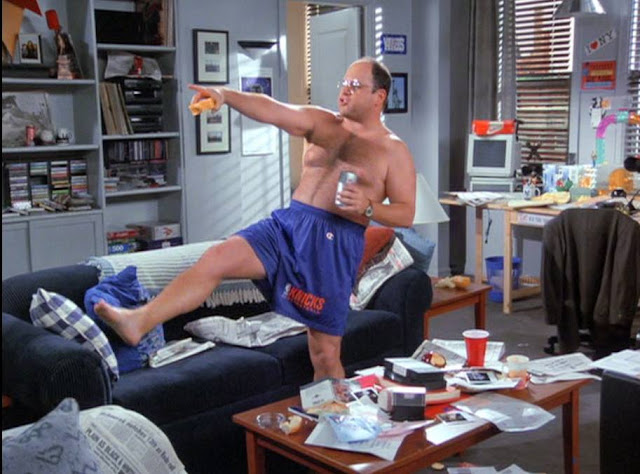 What's up with those shorts? Did Taylor Swift steal the no belly button in pictures move from cheese-eating (Summer of) George? God she just gets better and better.


He doesn't look very approving of that union. Not one bit. 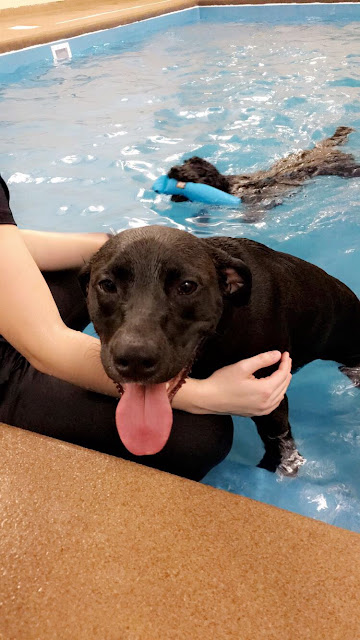 This is a big one


Mean Tweets are always good for a few laughs, and Larry David outtaking his way through them is even better. If only this season of Curb were as funny as Larry reading mean tweets about Jimmy Kimmel...

I fell in love with this band/song/video years ago when it first surfaced, and now I stumble upon a much better angle and I'm in love ALL OVER AGAIN. Their reactions to the crowd singing along and knowing the lyrics will never stop being amazing.

Make sure you stick this one out to the end. It's pretty crazy that a solo acoustic cover of this song can still get the crowd ROCKING.

PS - allegedly Freddie Mercury's headboard on his bed was a piano and he woke up in the middle of the night and just starting writing this song and it took 7 years to finish writing it. I'm not sure where to begin on trying to understand genius like that. 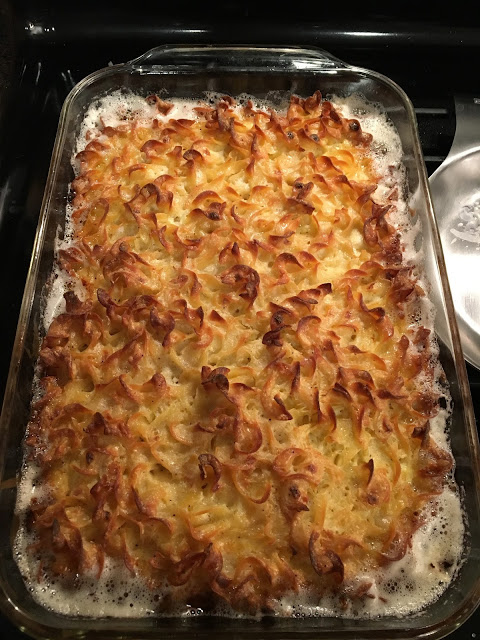 Homemade NOODLE KUGEL! MMMMMMM KUGEL. Part of me wants to write it out k-UGEL like dis:

PS - if you've never encountered a Jew before and are wondering what you're looking at, it's basically a casserole with egg noodles, cottage cheese, sour cream, eggs, butter, and a little bit more butter. Mix it all together, bake it for a few hours and FEAST. This is my go-to Friendsgiving offering and the closest thing we Rifkins have to a family recipe. It's a smash hit. It's not healthy. It's kugel. 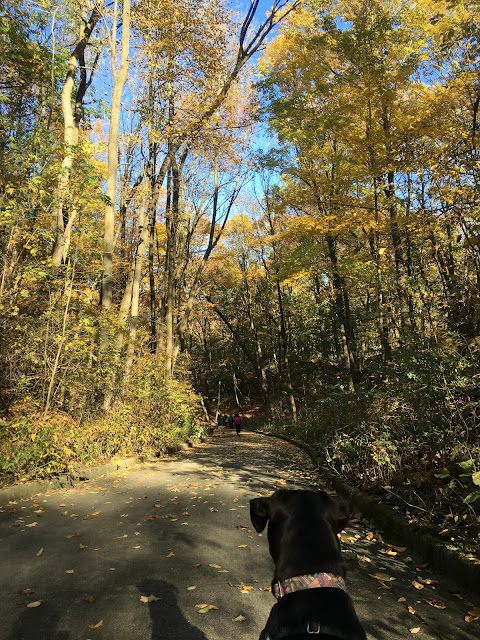 The Milwaukeeans out there will recognize Doctors Park anywhere. Finally got to walk the hound through the park and down to the beach and it was sniff OVERLOAD for her. But Fall is a great time for a stroll through a park.

ON WISCONSIN
Posted by Schwa at 10:51 PM