In honor of #GKBWeek we need YOU, our fans, to tweet @ESPNMadison with #59-0 as a friendly reminder of the last Big Ten title meeting. Let it begin... pic.twitter.com/YidpOBXT1i
— ESPN Cleveland (@ESPNCleveland) November 27, 2017

Now, I don't think anyone out there needs a little something extra to get fired up for Saturday. Seek help if you are having a hard time NOT controlling your excitement about a chance to lock up Wisconsin's first trip to the College Football Playoff. Because this is, quite litrally, the single biggest game in Wisconsin football HISTORY.

You've been reading these long enough to know that I tend to shy away from unnecessary hyperbole. FALSE. I love hyperbole! But I really don't think I'm being dramatic when I make that statement about the gravity of this game. We are this close to reaching a level no UW team has dared to soar to. One win and we are in... the final four? It's weird we call the playoffs just 'the playoffs' everywhere but college sports. NBA/NFL/MLB/NHL all about making the playoffs. But at the collegiate ranks we get all these branded moneymaking NCAA Tournament™/College Football Playoff ®/Frozen Four © machines.

So let's go beat Ohio State. Let's avenge #59-0 which I'm going to hashtag because it happened. We'll never change the shitshow that was that night. The embarrassment of getting positively THROTTLED in primetime. THAT SUCKED.

But as painful as that night was, a win on Saturday will be 100x sweeter. Mike McDermott liked to say "Few players recall big pots they have won, strange as it seems, but every player can remember with remarkable accuracy the outstanding tough beats of his career." All due respect to Mike McD: we're going all-in on Saturday night and we're gonna be re-watching this game on BTN for the next 7 decades.

TV: FOX
WEATHER: I HEAR INDY IS QUITE NICE THIS TIME OF YEAR

Because we're gonna run the ball down their throats on our way to the playoffs.

PS - but also because this is a KILLER audience singalong performance. One of the times where I almost want the singer to just SHUT IT and let the crowd do all the heavy lifting.

1. Ohio State, 10-2 (8-1). Oh your starting QB got assaulted by a camera and had emergency surgery (in the studio) the week before the B1G Championship game? And if for some reason he can't play you'll have to turn to one of your other 8 star recruits? SHAME! SHAME! SHAME! 🛎

2. Wisconsin, 12-0 (9-0). BLAH BLAH BLAH Wisconsin didn't play anyone! Weak schedule! ANYONE could go 12-0 against those scrubs! Even if they win out they might not back the playoffs!

MALARKEY. As I promised, a win over OSU sends UW to the playoffs with zero doubt. Zilch. Nada. Stay the damn course, keep winning, and all is good in the Wisco hood.

PS - you know what's really dumb about that 'easy schedule' tomfoolery? Yes, Wisconsin was favored in every game. But let's pretend for a second that we had a 90% chance of winning each of those games (which is WAYYYY higher than the actual odds in most of those games). If we had a 90% chance of winning each game, then we only had a 28% chance of going undefeated. Even THAT would be an impressive achievement. Then you just have to sprinkle in a couple of games where we had, say, a 60% of winning and your odds of an undefeated season start PLUMMETING.

Probability is the worst, but once you start actually looking at the numbers you quickly realize that going 12-0 against what many want to label an 'easy' schedule is still very, very improbable and very, very freaking amazing.

3. Penn State, 10-2 (7-2). In my post-package thievery life I've been keeping tabs on all of the neighborhood groups I joined on Facebook. These things are breeding grounds for paranoid insanity. The most frequent post:

Usually there's a follow up comment like 'oh never mind my boyfriend farted really loud, sorry lol'. But like, what do you even DO with this kind of question? Either you know someone was shooting a gun and you call the cops or you don't and you go on with your life. I don't really get the point of all these 'did anyone see a person walking down the street with a flamethrower just now or was someone just lighting a cigarette? 1300 block bosworth' posts. FEARMONGERING.

PS - there are also a bunch of posts where people point out that someone left a light on in their car and they don't want them to wake up with a dead battery - which is a totally nice thing to do! My problem with that, though, is that car batteries have apparently not evolved to a point yet where a .2 watt lightbulb being on for 8 hours COMPLETELY WRECKS a battery the size of a cinder block. I'm no grease monkey, but something about the weakness of car batteries doesn't add up.

The battery industry as a whole needs Elon Musk to just figure it out. A stupid iPhone should go a week without charging. I should literally NEVER have to worry about batteries in a remote control.

I demand BIG BATTERY cultivates a breakthrough on the same level as TV going from SD to HD. That's the kind of change we need.

4. Michigan State, 9-3, (7-2). Quietest 9-3 team in the land. And I HATE how good their hoops team is this year. They're our top competition for overall best hoops/football combined program in the conference.

6. Michigan, 8-4 (5-4). I finally got to the hyped new Jurassic World 'exhibit' thing at the Field Museum. It's so cute. You take a fake 'boat' to the 'island' and then go through the gates of Jurassic World to start your tour. The first dino that greets you is arguably the coolest: 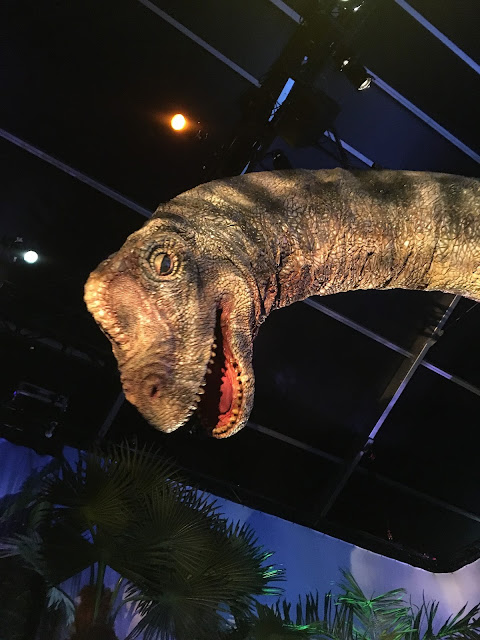 A giant veggiesaur towers over you and LOOKS YOU RIGHT IN THE EYE while wondering how he ended up the kind of dino that DOESN'T just swoop down and eat your faces off.

Seriously, it's insane that this was the coolest dino on the tour. The T-Rex was obviously hyped but it was some slow moving assault on a downed jeep. The steggo was pretty dope, but needed more tail thrashing. And let's not even BEGIN to talk about the disappointment at the raptors paddock, where it was UIC junior in leggings and a halloween costume prancing around a cage paying her way through school. LAME.

PS - Seriously I will give them credit for the eyes of these robo-dinos. These motherjumpers were blinking and looking around and dear god I did not anticipate that level of dino stink eyeing while hungover. DON'T JUDGE ME BRONTY

7. Purdue, 6-6 (4-5). HUGE victory for Purdue when their coach turns down Tennessee, which apparently is just now finding out that if you let mouth breathing internet nerds dictate the way your athletic department functions... you're gonna have a bad time.

8. Iowa, 7-5, (4-5). I'm making my way through the Song of Ice and Fire books (I decided to go full nerd and not call them the Game of Thrones books), and it's really amazing how hard some of these things are hitting me after having watched them in the show a million times. For some reason, Ygritte's death FLOORED me in the books. I guess that's just good writing and one incredible story.

PS - the amount of foreshadowing for the Red Wedding is downright remarkable. How did he keep bashing us over the head with it without anyone actually realizing what was about to happen? As far as twists go, the Red Wedding is ELITE.

5) "Einhorn is Finkle... Finkle is Einhorn!" Very clever, but was Einhorn just going around with a mangina the entire time they were in Einhorn mode? Such commitment to the role!

4) "No... I am your father." I think if you were born in a certain time this would be the hands-down winner. But it's become so ingrained in pop culture that it kinda loses a little of its pep. I don't even remember when I experienced this for the first time, but I don't think it left a lifelong impression of awe in me.

3) "I see dead people." Well when you see The Sixth Sense for the first time in 2016, it's technically impossible for this one to knock your socks off. Just feels good to finally be in on it. BRUCE WILLIS IS DEAD THE WHOLE TIME!

2) Tyler Durden isn't real. Fight Club really melted all the brains when you piece together that Brad Pitt's character was never real. There's a reason entire classes in college are devoted to the book behind the movie. I may or may not have just made that up.

1) Basically everything in The Prestige. Top 5 favorite movie. I'm not even going to talk about the twists themselves, and I'm linking to the trailer. If you've never seen this movie, fix your life immediately. It's a movie about warring magicians starring Batman and Wolverine featuring Alfred and ScarJo directed by Christopher Nolan. That alone should be all the convincing you need.

9. Nebraska, 4-8, (3-6). I saw a tweet saying 'the #blackshirts are officially dead' and I had to laugh. Nebraska's defense has been butt cheeks for years. These times they are a changing.

10. Rutgers, 4-8 (3-6). Even the stupid advertising screen in my building's elevator is taunting me: 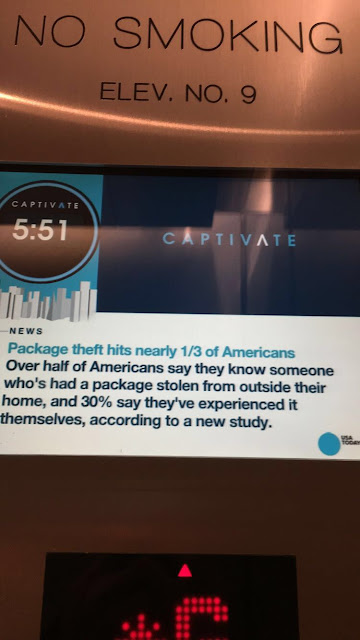 In my mad scramble to take a pic of that, did I end up having to ride the elevator all the way back up to the top floor? Maybe. Perhaps. Who could really say? 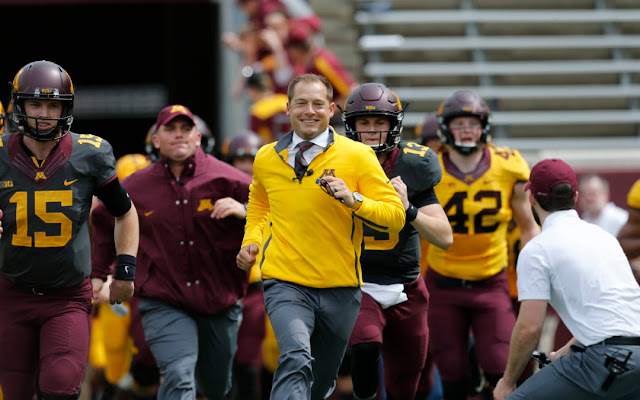 Fugly gold quarter zip on top of a shirt and tie. BARF.COM/GROSS/WIPETHATSMILEOFFYOURFACE 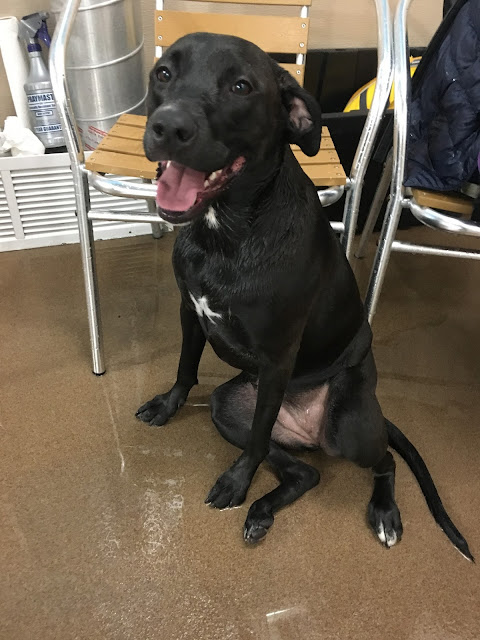 That is one LAZY sit. Like she got stuck between a sit and a lay down and is simply too pooped to fix it. I sometimes find myself sitting in an uncomfortable position with my foot under my butt, and it starts to hurt but I'm too lazy to actually adjust. It's good to know my dog can empathize.

The hot takes are getting cold

Win and we are IN

Not only is the cover itself impressive (such emotion at :44), but the lyrics up on a screen in front of Mr. Chicken is downright genius. I hope to never outgrow laughing at something this stupid.

What a perfect show. The combination of the devious obstacles, blatantly made up voice overs, and elaborately stupid professions for the contestants is just dynamite television. We need more of that.

PS - It's crazy that it's spelled 'dynamite', but when people enunciate the hell out of it they always go 'DY-NO-MITE!' I will attribute my never-ending inability to spell dynamite to that excuse.

Almost 5 years old! Where does the time go? 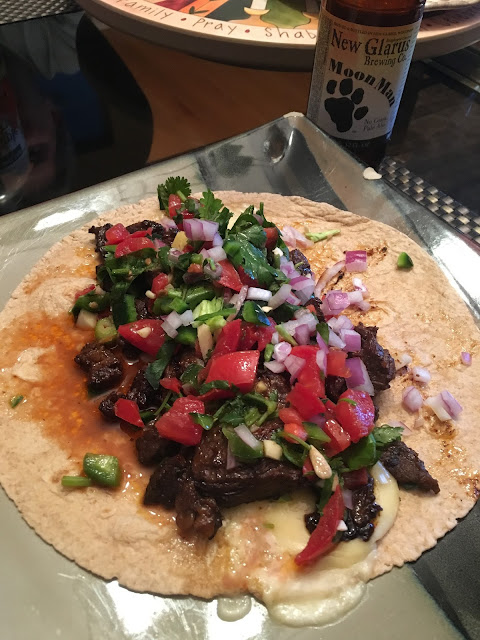 The important backstory is that our Thanksgivings used to have TERRIBLE food, but we were required to attend due to various familial obligations. That meant a stop at the White Castle in Kenosha on the way back to Milwaukee every year for a Crave Case or two. Sad but cute!

Anyway, flash forward to a few years ago and that obligation is no longer a thing. So instead of doing boring turkey as the main dish, we like to mix it up. SO CLOSE to pulling the trigger on prime rib this year, but we settled for some divine skirt steak burritos to go with the standard blah turkey with all those cliche fixins.

Bring the hate. There's no way anything on your plate was as good as this burrito with hand trimmed steak, homemade pico, melted chihuahua cheese, and diced up poblano pepper. That's A+ Thanksgiving fare. Step outside your turkey box. 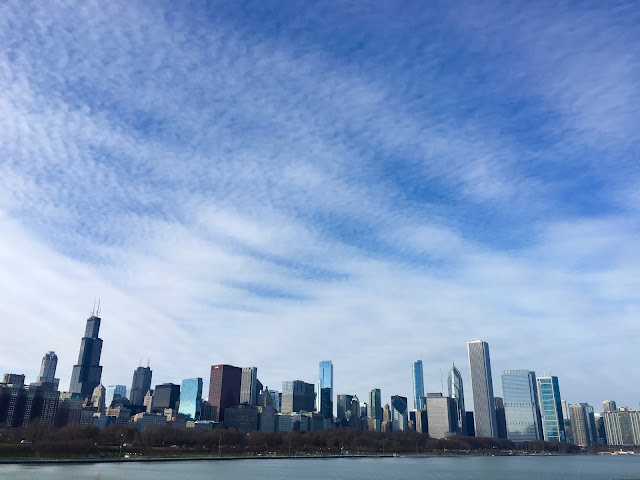 Even though we've been on a real burner of hot skyporn these last few days (late fall is elite skyporn weather), I'm going with one of my favorite views of Chicago. It never gets old. And some cool cloud cover can't hurt.

ON WISCONSIN
Posted by Schwa at 11:59 PM