Another shutout. What a surprise. It's almost as if Aranda is the best defensive coordinator in the world. I hope Barry personally delivers a chest full of rare doubloons to Aranda's house that's probably on a golf course in Verona. No more BS about being unable to pay assistants - this athletic department makes more money than 99% of the colleges in the world. Pony up the cash - Aranda is worth every single doubloon we can spare.

Why the hell am I ranting? Let's all watch this gem and get ready for #IowaWeek:

PS - Whoa hey Will's got weird in a hurry last week. Starting to think I got vodka-bombed but have no way of confirming it. Hmmmmmmmm. 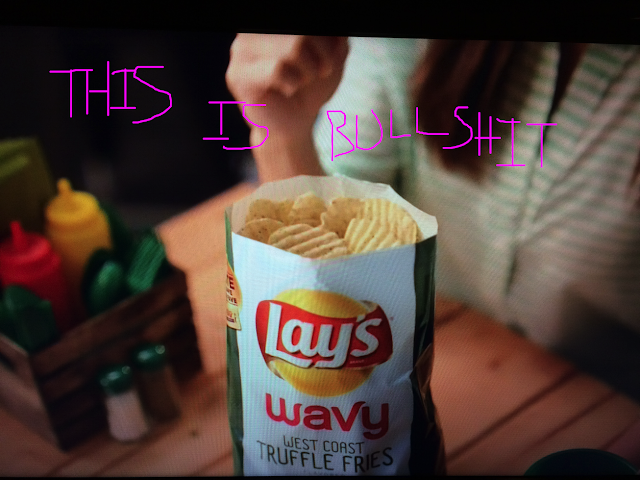 That's taken directly from a Lay's commercial for all the bizarre new flavors they're pushing. You give me a call the day you open a bag of chips and it's filled to the fucking BRIM. Science alone says that you couldn't even seal a bag with that many chips in it. That's at LEAST two normal bags worth of chips dumped into one. Possibly three. I consider this wildly misleading, much worse than fast food commercials vs. fast food reality. With the fast food swindling, your food may not look like it does in commercials, but at least it's usually all actually there.

Here? Here, Lay's is literally lying to every fat person in America's FACE whose nipples would get erect if they opened a bag of chips and it was completely full.

2) Ohio State, 4-0 (0-0). Winning, but not looking like the world beaters we thought they were. Should be interesting as conference play rolls along. 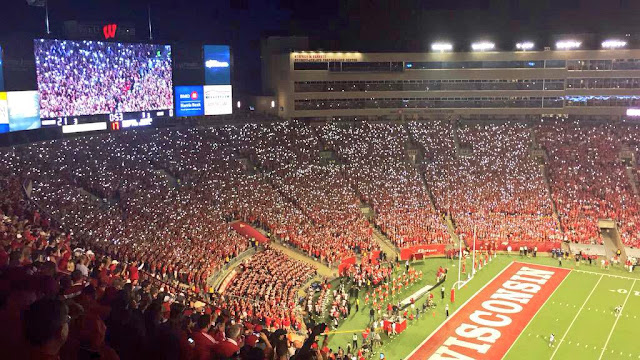 I hope so, because it's pretty awesome. Also, I'm old: my student section would all bring a piece of white paper to hold up when James White did something cool. Damnit.

PS - Similar thing happened at the Foo Fighters concert I went to at Wrigley:

I'm all about this trend.

PPS - Hey UW, figure it out already. Have at least one night game every year, forever. And if you want to really be cool, make it a B1G game. There's no official rule preventing us from doing so. Just fucking make it happen. I can't imagine anything makes UW football (and the school in general) look more badass than 80,000+ going wild at night.

4) Northwestern, 4-0 (0-0). Newest member of the Northwestern hoops team? The son of Julia Louis-Dreyfus. Now I HAVE to root for the nerds to make the Big Dance just so I can see his mom celebrate:

6) Illinois, 3-1 (0-0). I wonder how many people reading this right now could name one player on the Illinois football team. I bet less than 7%.

7) Michigan, 3-1 (0-0). That was an impressive win, and I vow to never say anything nice about Michigan ever again.

8) Indiana, 4-0 (0-0). This is me refusing to acknowledge the possibility that Indiana beats OSU.

You can't see it but BRANDON IS RAISING HIS HAND WITH EXTREME VIGOR. #AlwaysBelieved #StaveHeisman #HackenbergSucks

11) Nebraska, 2-2 (0-0). Holding off Southern Mississippi for a one possession win just might turn their season around NOPE

Stupid is as stupid does.


I don't care what conference you're in, bragging about beating Maryland and Purdue is borderline pathetic.

PPS - Bowling Green is 3-1 against the B1G in the last two years. Hey rest of the B1G, you're welcome.


Graveyard are a Swedish Classic Rock band. That sentence is factual albeit improbable. This is a new cut from their new album. Enjoy it bozo. (JQW)


Really like this song but after making it through the entire video I think I'm too scared to ever listen to it again. That, uh, took a turn for the worse.

UW's Running Back Tandem vs. A B1G Defense. Against the Troys and Hawaiis of the world, UW can get by just riding Stave's mythical right arm and majestic flow. But now it's B1G time. I'm not convinced that Iowa is actually good, but they're going to be physical. They're going to hit hard. Can Taiwan Deal and Dare Ogunbowale take the punishment and still be effective? I have to assume Joel doesn't want to take all the credit for this win, so we'll need the running game to contribute enough so Stave can be sincere when he says it was TEAM effort out there on Saturday.

I don't know much, but

If there's one thing I do know


(Just sitting here waiting for the day one of my friends texts me 'dude haikus are fucking lame, stop writing them. Who's gonna be that friend?)

I don't know if I could enjoy this more than I am. Dorky preppy rich guy in the first row with a hot chick next to him and he fumbles 3 attempts at catching a ball? It looks like the last one was even tossed to him by a ballboy! 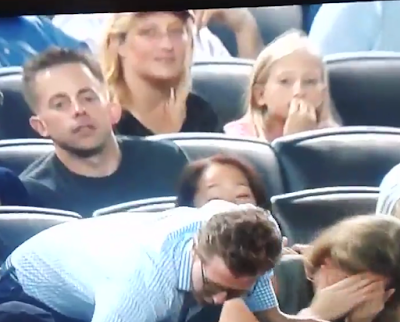 Look at her! SHE LITERALLY CAN'T EVEN. He has reduced her to not evening. That's how uncoordinated this guy is.

PS - Sometimes we play no hand flipcup where you have to use your mouth to drink the beer and then flip it and I always worry we look like a bunch of uncoordinated idiots while doing this. But then I see this guy and I know no matter what there are much less coordinated idiots out there. And they get caught on TV at the Yankees game.

PPS - Okay yeah no hand flipcup makes you look like an absolute moron. I won't deny that.


What happens when the musical guest who was gonna tickle the ivories smashes their hand in a car door the day of the show? You ask the crowd if anyone out there can play piano and bring a random guy up on stage who proceeds to absolutely crush it. 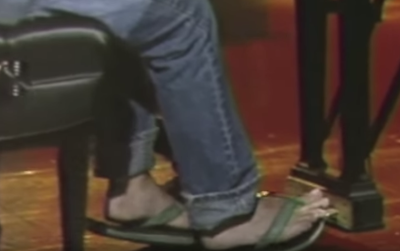 PPS - I shouldn't make fun because if he was married then I can pretty much guarantee his first child was born 9 months after this. Crushing it.

PS - Got a new iPhone this week and I'm still in that honeymoon phase where I keep wiping the screen with one of those cool microfiber things and I place it gently on the table. Until it suffers its first scratch on the back that in the big picture is meaningless, I will tenderly love and caress it. But after that first insignificant imperfection? Right back to tossing it like a frisbee onto my bed and spilling beer on it. I hate how this delicate little machine holds so much POWER over me.

PPS - The biggest change going from a 5S to a 6S? The vibrate is TOTALLY different. Feels different, sounds different... it's really throwing me for a loop. But I also LOVE the new vibrate. Huge fan.

PPPS - If you wanted confirmation that I'm a huge nerd who works in mobile, just go ahead and re-read those last two PS's. 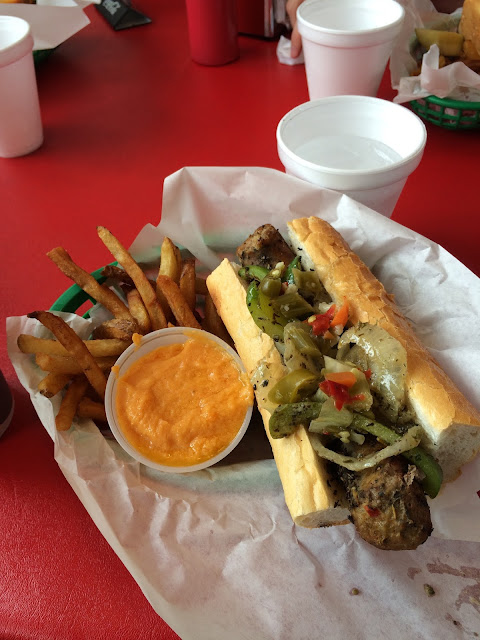 Italian sausage with peppers and onions, fries, and if you don't know what melty stuff is in the plastic container then you're on the wrong blog. This comes from Murphy's Red Hots, which is exactly the place I'd send a Japanese tourist to if they asked where to get a classic Chicago meal. When you think of a small joint run by a guy with a mustache selling nothing but dogs, sausages, and burgers, this is exactly what you hope to find. Obnoxiously delicious.

PS - Also one of those meals where you look at a picture of it and you're just like 'whoa this is how fat happens'. YOLFO 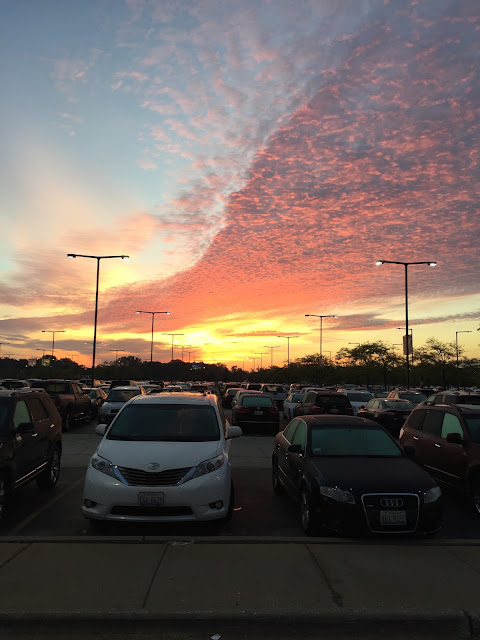 A friend sent me this killer sunrise pic, and hot damn it's hard to argue with that. That's the kind of morning sky that makes rolling out of bed seem like a fantastic idea. All mornings should be legally required to have gorgeous sunrises like this, BY LAW. I demand it be mandated. If Donald Trump runs on this Mandatory #Skyporn ticket, I'm making phone calls for donations for his campaign. Does that make sense? Does a stupidly rich candidate still need to soak other richies for money?

On the road we might have an issue here. But Iowa hasn't been all that impressive, and if Vegas thinks we're a touchdown favorite then I am inclined to agree and exaggerate. THE PICK:


ON WISCONSIN
Posted by Schwa at 5:30 PM